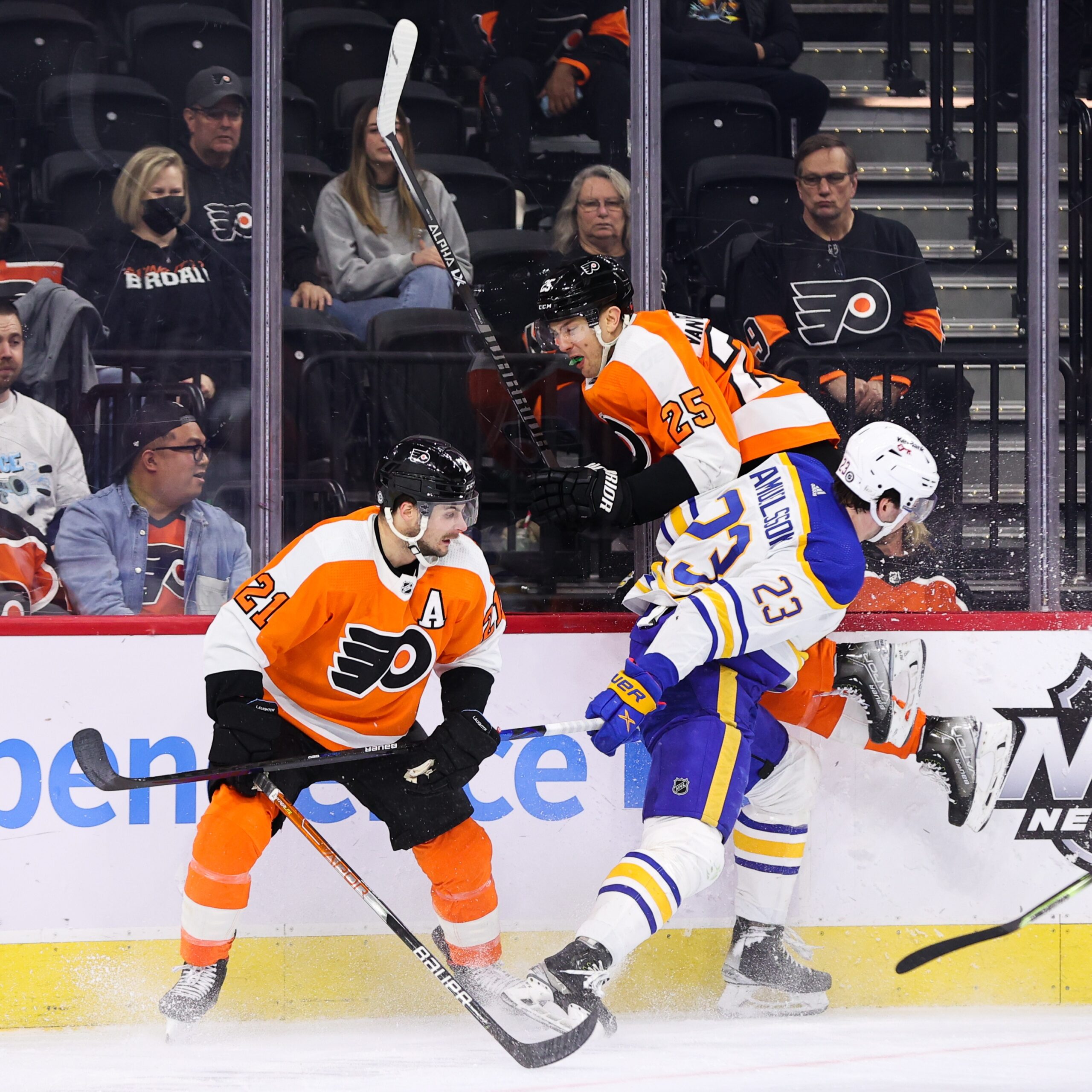 The Philadelphia Flyers slumped to their fifth straight loss, and fifth straight dating back to last season against the Buffalo Sabres as the Sabres were able to sweep the home-and-home and season series. Tage Thompson and Victor Olofsson scored twice, the Buffalo power play tallied again, and the Flyers’ Felix Sandstrom remains winless. The second period was the problem once again as the Flyers were outscored 6-2 and outshot 32-12 in both games combined. The Flyers got goals from Kevin Hayes, Noah Cates, and Zack MacEwen, but once again it was too little, too late.

The Flyers looked to avoid a home-and-home and season sweep at the hands of the Sabres. After starting the game white-hot with two goals in the first four minutes in last night’s game, the Flyers blew up in the second period and allowed the Sabres to take a 4-3 lead after 40 minutes. The Orange and Black had three straight power play opportunities to get back in the game but couldn’t do much of anything with their 32nd-ranked man advantage. The sole lineup change was Felix Sandstrom getting the nod today on the back half of the back-to-back.

Similarly to last night, the Flyers scored the game’s first goal extremely early, this time only 76 seconds into the game. With the Sabres trying to send an outlet pass out of the zone, Ivan Provorov did a good job on getting his stick on the puck to keep it in the zone. Noah Cates picked up the loose puck and passed it quickly to Kevin Hayes who tried making a move in the slot. He fanned on the initial shot but fortunately for him he was able to follow the puck and backhand it on a bad angle against Dustin Tokarski, who was way out of position to make a save.

The Hayes goal was the Flyers’ fifth shot of the period only a minute in and it seemed like they were going to run rampant in the first period again. A few turnovers later and the Sabres started to gain traction and controlled the next few minutes as they did in the second period last night. On a Tage Thompson snapshot that hit the iron, the puck zoomed out of the zone and onto the stick of Travis Konecny going the other way. Kevin Hayes took a bad angle shot for the rebound but Keith Yandle flubbed the opportunity that came right to him and as he missed he ended up hooking a Sabre for the first penalty of the game.

It only took Buffalo 53 seconds to tie the game up after some reminiscently pretty passing by the Sabres led to a Victor Olofsson one-time blast. The goal represented the sixth power play marker for Buffalo against the Flyers this season.

With 6:53 remaining in the first period, Travis Konecny was tripped up by Kyle Okposo, giving them an opportunity to re-take the lead with their man advantage in a 1 for 22 slump heading into tonight’s game. All things considered, it was a better looking power play than their previous 4 from last night, however it rendered the same result with nothing but the clock ticking away.

With 2:26 left in the first period, Andreas Bjork took the lead with his first goal in 27 games. Ronnie Attard sent the puck out along the boards with James van Riemsdyk getting a stick on it to push it out of the zone. The Flyers were making a line change thinking the puck was going much further down the ice, even though the Sabres corralled the loose puck at the neutral zone. Rasmus Dahlin quickly sent a pass to a streaking Bjork who had all the time in the world to shoot and score on Sandstrom with both Yandle and Attard changing. Yandle was the furthest from the bench but decided to head off with the rest of his linemates, which further hindered the Flyers’ chances. The Flyers held a 17-10 shot advantage, in large part to having eight shots in the first few minutes, but entered the first intermission down by one.

100 seconds into the period a large scrum ensued in Buffalo’s blue paint where the Flyers were jamming away at the puck, bodies were falling all over, and Tokarski wasn’t anywhere close to keeping the puck out of the net. The referees initially signalled penalty shot because Owen Power closed his hand on the puck in the crease, but after further review the puck had crossed the line. The referees had a lot to discuss with the goal, the hand on the puck, but also the referee’s intent to blow the whistle; however after all that, the Flyers were awarded a good goal and it went to Noah Cates.

A couple minutes later the Flyers were awarded a power play after Ronnie Attard was tripped up by Vinnie Hinostroza. The Sabres aggressively killed off the penalty and then created a few scoring chances once the penalty was killed. Tage Thompson was inches away from setting off on a breakaway but the outlet pass just missed his stick. With the Sabres gaining traction and momentum once again, Travis Sanheim was called for a holding the stick minor, sending the dangerous Buffalo power play unit back to work in a tie game.

With the penalty coming to a close, the Sabres re-took the lead courtesy of another Victor Olofsson one-timer. Buffalo was all over the Flyers at the end of the power play, firing shot after shot towards Sandstrom. Peyton Krebs and Dylan Cozens created this goal with some nifty passing before finding the Swede for the one-timer that Sandstrom got a piece of with his arm but not enough to keep it out of the net.

Less than five minutes later the Sabres doubled their lead courtesy of Tage Thompson. Ivan Provorov tried to bank the puck off the boards with two Sabres chasing him behind the net. With no player in an orange jersey anywhere in plain sight, the puck banked off the boards and to Jeff Skinner, who found Thompson in the slot for an easy finish. Kevin Connauton tried blocking the shot but fell too early and that allowed Thompson to zero-in on Sandstrom’s glove side, which had seemingly been the Sabres’ MO tonight.

Five minutes into the final period of regulation, both teams shared dangerous scoring chances apiece. Travis Konecny found himself on a breakaway coming off the wing but his wrist shot went well wide. Alex Tuch took the loose puck and then sent Jeff Skinner on a breakaway of his own with a perfect outlet pass but the Swedish netminder Sandstrom was able to thwart the scoring chance and keep the deficit at 2.

Not too much happened after that until the 11-12 minute mark of the period when the Sabres created several scoring chances from Alex Tuch, Casey Mittelstadt, and Mattias Samuelsson and then the Flyers had a breakaway from Scott Laughton sandwiched in between that hit the iron.

With the flood gates re-opening after a very mundane start to the period, the Flyers rode the wave of Sandstrom saves to cut the deficit in half. Travis Sanheim entered the zone with speed and dropped a pass to Zack MacEwen, who then played a little give and go with the streaking defenseman. Sanheim then sent a pass to Oskar Lindblom at the goal-mouth, who was robbed initially, but MacEwen cleaned up the garbage by tapping home the rebound for his third of the season.

The Flyers were very close to tying things up with a little less than four minutes left, but Kevin Hayes held onto the puck for too long when he had a chance to shoot at some open twine from the face-off circle.

With the goalie pulled for almost two minutes, the Flyers had a tale of two halves mixed in with their timeout. The first half was stationary play, lots of passing, and not many shots being thrown to the net. After the timeout, the Flyers had two very good chances to tie the game but missed the net. Tage Thompson iced things with an empty-netter and his 5th goal against the Flyers this season.

The Flyers visit the Maple Leafs in Toronto on Tuesday night as they face a team with the league’s leading goal scorer in Auston Matthews.