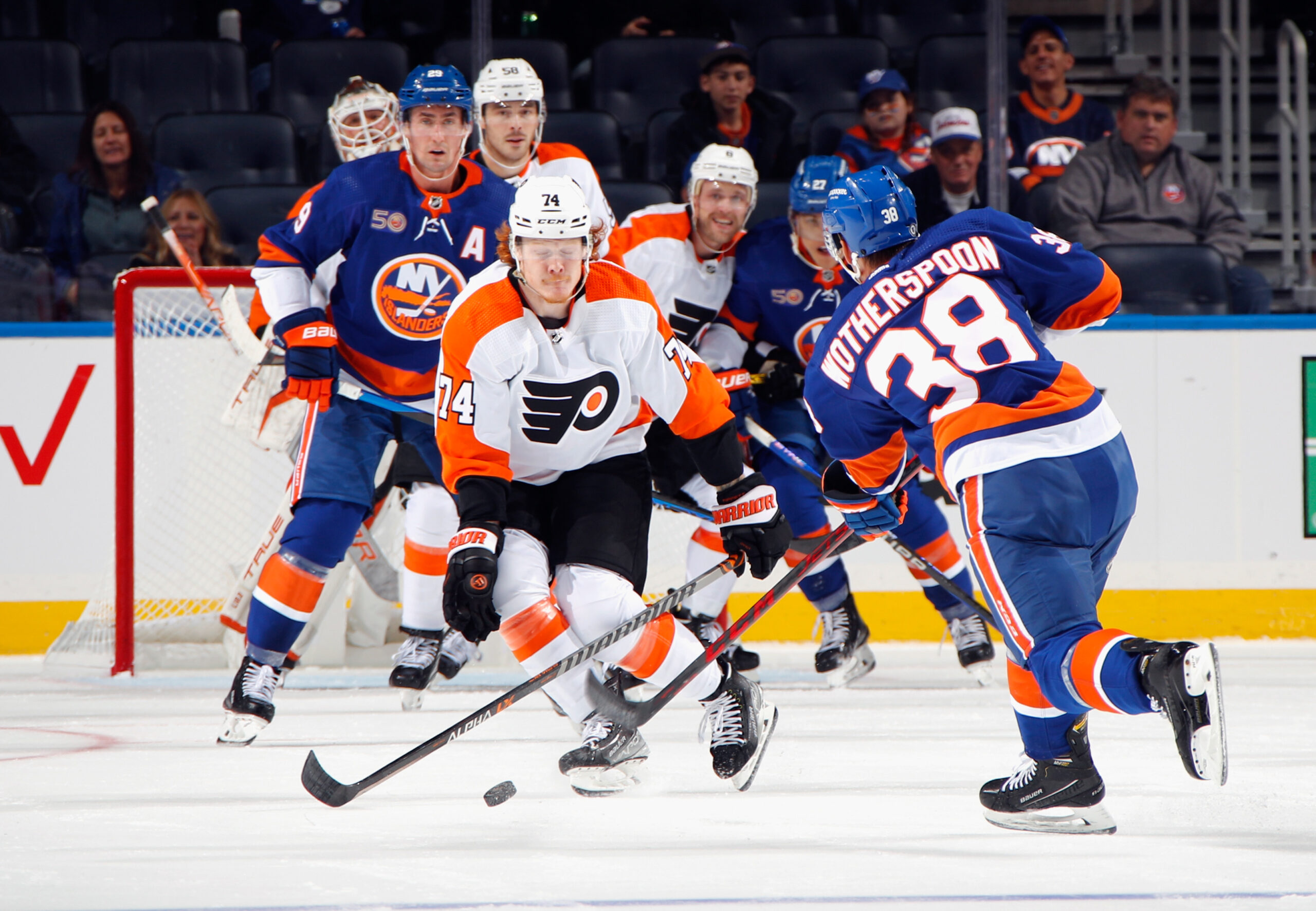 The Philadelphia Flyers have found themselves in a slump this preseason, to put it simply.

While the results on the scoreboard aren’t as important as how the players perform as they gear up for the regular season, a few wins can go a long way into building some confidence.

Unfortunately for the Flyers, they’re experiencing quite the opposite at the moment as they’ve now dropped four consecutive preseason contests after falling to the New York Islanders tonight by a score of 2-1.

The Islanders began to buzz within the first few moments of the game, registering the contest’s first two shots on goal and keeping the Flyers on their toes in their zone.

That would come to an end after Grant Hutton was called for interference against Egor Zamula. Philadelphia displayed some decent puck movement and fired a couple shots on net, but Semyon Varlamov kept the Flyers at bay in goal and New York killed off the penalty.

Just 29 seconds after the penalty expired, Hayden Hodgson was whistled for high-sticking against Kyle Palmieri, and the Islanders would get their first power play of the night.

After killing three of four penalties against Boston yesterday, the Flyers kept things rolling on the PK and squashed New York’s attempts to net a goal on the man advantage.

The Flyers and Islanders would continue the usual brand of low-octane hockey that occurs between these two teams, and the period would end at 0-0, with Philadelphia leading the shots on goal battle at 9-7.

The intensity and physicality in the game would pick up rather quickly in the middle frame, as all hell broke loose after Oliver Wahlstrom laid a large hit on Kevin Connauton. Nicolas Deslauriers and the Flyers took exception to the hit, and Deslauriers ended up with a roughing minor as a result. Wahlstrom initially ended up being called for a boarding major, but he was given a minor for boarding and a minor for roughing after further review.

After everything subsided, the Flyers headed to their second power play of the evening, and just 19 seconds into the man advantage the Islanders would send the Flyers to a 5-on-3. Scott Mayfield cross-checked Tyson Foerster and was sent to the penalty box despite his protests.

It took the Flyers all of 17 seconds on the two-man edge to score the first goal of the night. After a good cycle with the puck, Morgan Frost found Tony DeAngelo in the high slot and the defenseman pounded home a one-timer for a 1-0 Philadelphia lead.

Tony DeAngelo scores his first preseason goal with the #Flyers on a 5 on 3! pic.twitter.com/E4mk4Von9c

The Islanders would not go away however, and after Hayden Hodgson took his second penalty of the game for holding, New York took full advantage.

Samuel Ersson was on top of his game tonight for the Flyers, but he couldn’t come up with the save on Kyle Palmieri and the New York forward tied the game up on the power play with 9:45 to play in the period.

Samuel Ersson gave his all shorthanded, but it's 1-1 now. #Flyers pic.twitter.com/vgUrWNPPQh

Apparently not learning their lesson, Philadelphia returned to the box less than four minutes later as Wade Allison tripped up Simon Holmström to put the Islanders on another power play.

Luckily, the Flyers killed Allison’s minor off, but New York kept their foot on the gas and just 16 seconds after the penalty expired, Scott Mayfield fired home a shot from the point that beat the traffic in front and beat Ersson to put the Isles on top at 2-1 with 4:42 remaining.

The #Flyers kill the penalty and Scott Mayfield scores shortly after. pic.twitter.com/moPP6fe7yi

The Flyers would escape to the dressing room still within a goal, and while they outshot the Islanders again in the second period, they needed to cut down on turnovers and penalties if they wanted a shot to win the game.

Philadelphia had an early chance to tie things up in the final frame as Parker Wotherspoon high-sticked Nicolas Deslauriers just 2:14 in, but the Flyers could not generate much offense and the Islanders killed off the penalty with relative ease.

Jakub Škarek had entered the game for the Islanders at this point in goal while Samuel Ersson remained in net for Philadelphia.

The two rivals would trade shots as the period wore on, and more fireworks erupted around the nine-minute mark of the period. It was Oliver Wahlstrom again right in the middle of things, mixing it up with Scott Laughton and both players would earn coincidental minors. Laughton’s was for roughing and Wahlstrom’s was for slashing as the latter took a whack at Ersson to try and get the puck past him, much to the chagrin of the Flyers’ 2012 first-round pick.

Parker Wotherspoon picked up his second high-sticking call of the game with 4:46 to play, which could’ve been a huge opportunity for the Flyers to have a chance at tying the game up. Unfortunately, Noah Cates negated the power play 17 seconds later after high-sticking Scott Mayfield, resulting in some 4-on-4 play before a very brief Islanders man advantage.

Ersson would eventually head to the bench in favor of the extra attacker inside two minutes to go in the final stanza, and the Flyers had some quality looks to get another goal despite New York’s best efforts to seal the game away with an empty net goal.

Tony DeAngelo had the most golden scoring chance of all off an offensive zone draw right before the buzzer sounded, but Škarek clipped just enough of the of the puck to keep it out and away, and the Flyers blueliner was sunk to his knees in dismay as the Islanders were able to hold off Philadelphia by a score of 2-1.

Tony DeAngelo was this close to sending the game to OT…

The #Flyers fall 2-1 to the Islanders on Long Island. pic.twitter.com/wsizctPmQE

The Flyers will finish out their preseason slate on Tuesday night at Wells Fargo Center when they host the Islanders in a rematch in their final tune-up before the regular season begins on October 13th.

John Tortorella to make debut behind bench, Flyers fight to overcome losing streak
Flyers hold majority of vets out, give prospects one more chance to impress