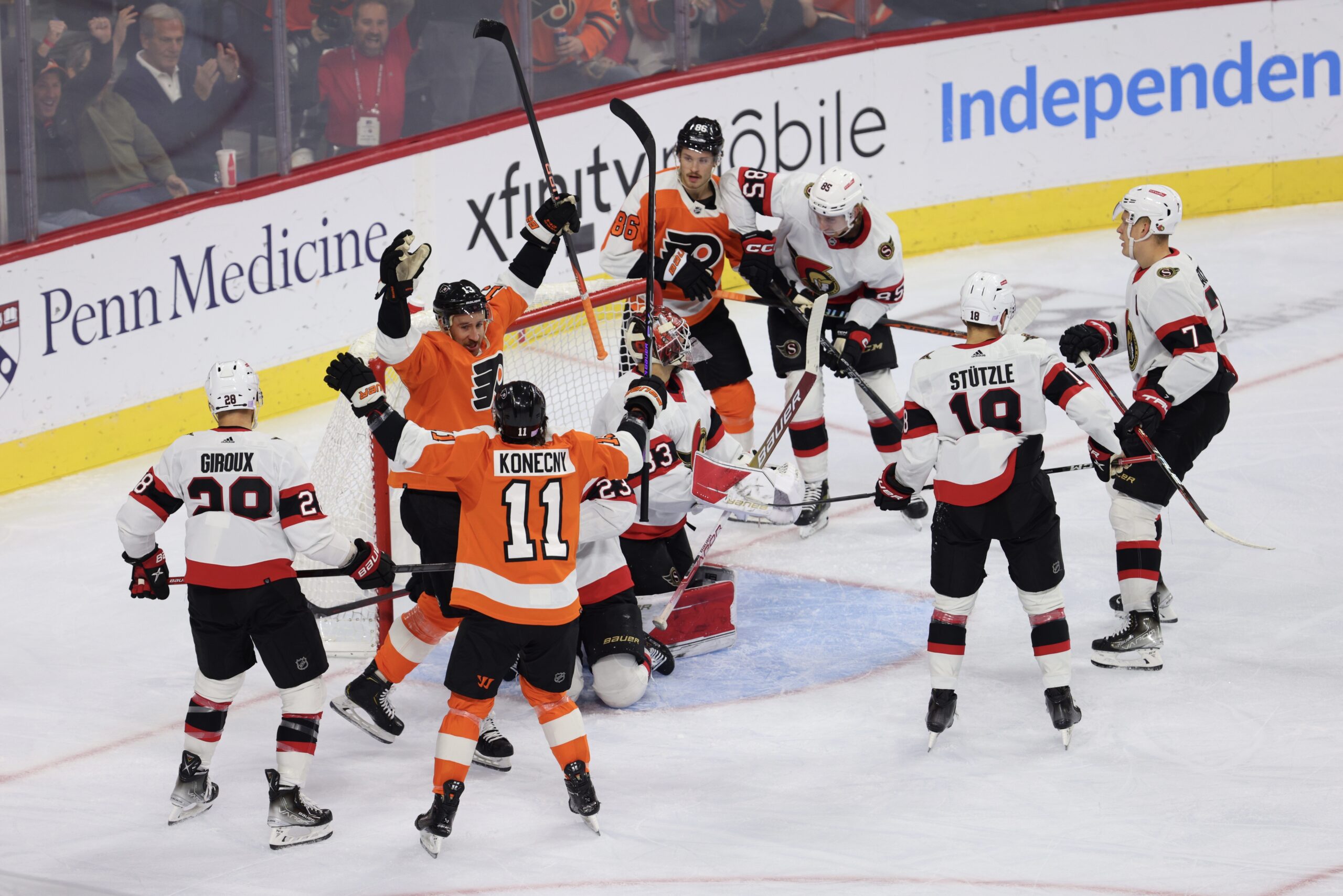 The Philadelphia Flyers were defeated by Claude Giroux and the Ottawa Senators in today’s matinee affair by a score of 4-1.

The game was tight up until the very end of the second period when the Flyers took their first penalty of the game that ended up resulting in the game-winning goal. The Flyers outshot the Senators 39-27 and had a very strong first 40 minutes, but Cam Talbot came up big time and time again as he secured his first win in a Senators uniform, which also represented their first win in 8 games and their first road win of the season.

Giroux recorded 2 assists, the Flyers’ lone goal scorer was Kevin Hayes, as the goal scoring woes continue for the 31st-ranked offense in the NHL in terms of goals scored.

Following their 5-2 defeat at the hands of Columbus in their previous game, the Flyers came into today’s matinee unchanged with the exception of Joel Farabee returning to the top line in the place of Owen Tippett. In goal it was a rematch of the first tilt when the Flyers defeated the Senators 2-1 in Ottawa as Cam Talbot was in charge of helping the Senators snap their 7 game winless streak against Carter Hart.

On the second shift of the game, Owen Tippett jumped on a loose puck, centered a quick pass to Scott Laughton who had a great opportunity in the slot. His snap-shot was stopped by Talbot and as was the rebound opportunity for Wade Allison as the Flyers came inches away from taking an early 1-0 lead that started from the turnover committed by Jacob Bernard-Docker.

The Senators tried to counter with a rush of their own that was created by Claude Giroux. Tim Stutzle received a pass from the former captain of the Flyers but was stopped by Hart who shut down the five-hole with emphasis.

It didn’t take much longer for the Flyers to get one past Talbot as the top line worked its magic, but the play started from their own zone and off the stick of Nick Seeler no less. On a delayed offside, Seeler decided to take the puck out of the zone, took a hit to make the play as he got the puck further into the zone. Then a game of tic-tac-toe ensued between Joel Farabee, Travis Konecny, and Kevin Hayes with Konecny making a move towards the net. His stop was initially stopped by Talbot but with Hayes streaking towards the net, he was able to hammer home the rebound for his 3rd of the season.

With 8:54 remaining in the first period, Konecny dropped the gloves with Bernard-Docker after a few words and a play that the former didn’t appreciate from the latter. There was a collision that the Flyers and Konecny thought should’ve been called an interference penalty and Konecny came out on top in what became Bernard-Docker’s first career fight

Also lost in translation after the fight was Claude Giroux getting chippy and cross-checking Travis Sanheim, this coming after Giroux had a few words for Scott Laughton who gave Shane Pinto a shove after being knocked down by the rookie earlier.

2 minutes and 46 seconds later, Mark Kastelic (6’3”/210lbs) dropped the gloves with Tony DeAngelo (5’11”/180lbs) in a rather lopsided battle in size. DeAngelo and Kastelic didn’t need many words to get things going as the latter delivered a big body check on the former earlier in the period and they quickly dropped the gloves.

Kastelic got a few shots in as DeAngelo fell to his knees quickly, but he got back up but the size disparity did him no favours. Nevertheless it was another spirited bout as Nicolas Deslauriers looked on and had a few words with Brady Tkachuk and the referees.

On the very next shift, the Senators tied the game up as Thomas Chabot snuck through the defense and found himself all alone on Hart as he beat him blocker side with the help of Claude Giroux and Brady Tkachuk. The assist extended Giroux’s point streak to 8 games.

I hope you took the over on Claude Giroux points today. pic.twitter.com/R32xo4pci6

With 4:21 left in the period, Giroux was called for a slashing minor and as he went to the box he had a few more words, this time for Seeler telling him should hold onto that stick tighter.

It wasn’t the best showing with the man advantage as the Flyers had a few chances but only one hit the net off the stick of Owen Tippett, who was subsequently denied by the glove of Cam Talbot. The period ended 1-1 with the Flyers outshooting the Senators 17-6, but the Ottawa broadcasters would like you to believe that the Flyers got outplayed and were lucky to enter the intermission tied up at one.

After the Flyers iced the puck off the opening faceoff of the second period, the Senators almost took the lead on the ensuing draw but fortunately Carter Hart was able to stave off a few chances and when he was well out of his net, Tony DeAngelo and Ivan Provorov protected the paint and were able to keep the puck out of the open net.

Perhaps gripping his stick a little tighter than usual, Travis Sanheim roofed an almost-sure chance right in front of Talbot that was set up by another pristine pass by Tippett.

The Senators just kept coming in waves as the Flyers were causing turnover after turnover but the most noticeable Flyer in Tippett was sprung on a breakaway after an alley-oop clearance and as he tried to coral the puck, he was hooked and gave the Flyers another power play opportunity – it could’ve been a penalty shot but was deemed a regular penalty instead.

After another mid showing on the power play, the Flyers embarked on their third of the game shortly after as Mathieu Joseph tripped up Ivan Provorov. Unfortunately the Flyers came up short once again and weren’t able to sustain much of anything outside of a quick scoring chance that was initiated by Joel Farabee swerving his way through before backhanding a shot towards Talbot who let out a juicy rebound to Wade Allison. Allison, coming in with speed, was absolutely robbed on his second golden opportunity of the game coming off of a rebound as the penalty was killed and the game remained tied.

The second half of the period was dominated by the Orange and Black as they came in wave after wave with scoring chances aplenty, hard forechecking, and forcing the Senators into making mistakes but play was stopped as Wade Allison was on the ice in pain after hurting himself on his own collision with Bernard-Docker.

With 1:44 remaining in the second period the Flyers were called for their first penalty of the game after Nicolas Deslauriers interfered with a Senator as he tried freeing up Justin Braun on the wing.

Unfortunately, the 4th-ranked penalty kill wasn’t able to match their counterparts as Alex DeBrincat finished off a nifty passing play with Stutzle and Tkachuk with 48 seconds left in the period, giving them a much needed 2-1 lead.

This horseshit call on a Deslauriers interference has Ottawa up 2-1… pic.twitter.com/vKJk0MUduk

Then shortly after with only 22 seconds left in the period, Joel Farabee was sent to the sin bin for a tripping minor. The Flyers were outshooting the Senators 30-17 after 40 minutes but DeBrincat’s third goal of the game had the Flyers trailing for the first time in the game.

20 minutes away from gathering their first road win of the season, the period starting with a bang – quite literally – as Konecny delivered a strong body check on Thomas Chabot who took some time in getting back to his feet.

Travis Konecny with a huge hit.

Thomas Chabot turned on it and he's down the tunnel. pic.twitter.com/cRJU48B8Dg

That was also the 44th hit of the day for the Flyers as Claude Giroux had some more words from the bench for the Flyers and the referees. The Flyers did a fantastic job killing off the remaining 98 seconds of the power play to start the third as the Senators weren’t able to sustain any offensive opportunities. The Flyers took their third penalty in nearly seven game minutes though after Scott Laughton unnecessarily slashed Austin Watson after he delivered a big body check on Justin Braun.

The power play looked a little monotonous for the first minute and then Drake Batherson was set up perfectly all alone in the slot for a one-timer that Carter Hart padded aside. As the Senators came back into the offensive zone, DeBrincat scored his second goal in as many periods that was set up by Giroux using the back-boards to give the Senators a deadly 3-1 lead with only 13 minutes left in regulation.

The Senators really shut things down after taking their two-goal lead as the Flyers had issues traversing the neutral zone and sustaining any offensive zone time. Noticing the lull, John Tortorella pulled Carter Hart for the extra attacker with 4:10 remaining and the Flyers lost the puck almost immediately as Tim Stutzle scored into the empty netter 16 seconds later.

The Flyers were playing pretty well up until their first penalty of the game from Nicolas Deslauriers. Philadelphia took 3 penalties and all were unnecessary and infuriating for head coach John Tortorella as they truly became the backbreakers in this game. Ottawa was outshot 39-27 and outhit 59-38, but stuck by their guns as Cam Talbot kept them in this one as Alex DeBrincat did the rest to get the Senators their first road win of the season and their first win in 8 games.

The Flyers will host the surging Dallas Stars tomorrow in another 1:00pm start at Wells Fargo Center.