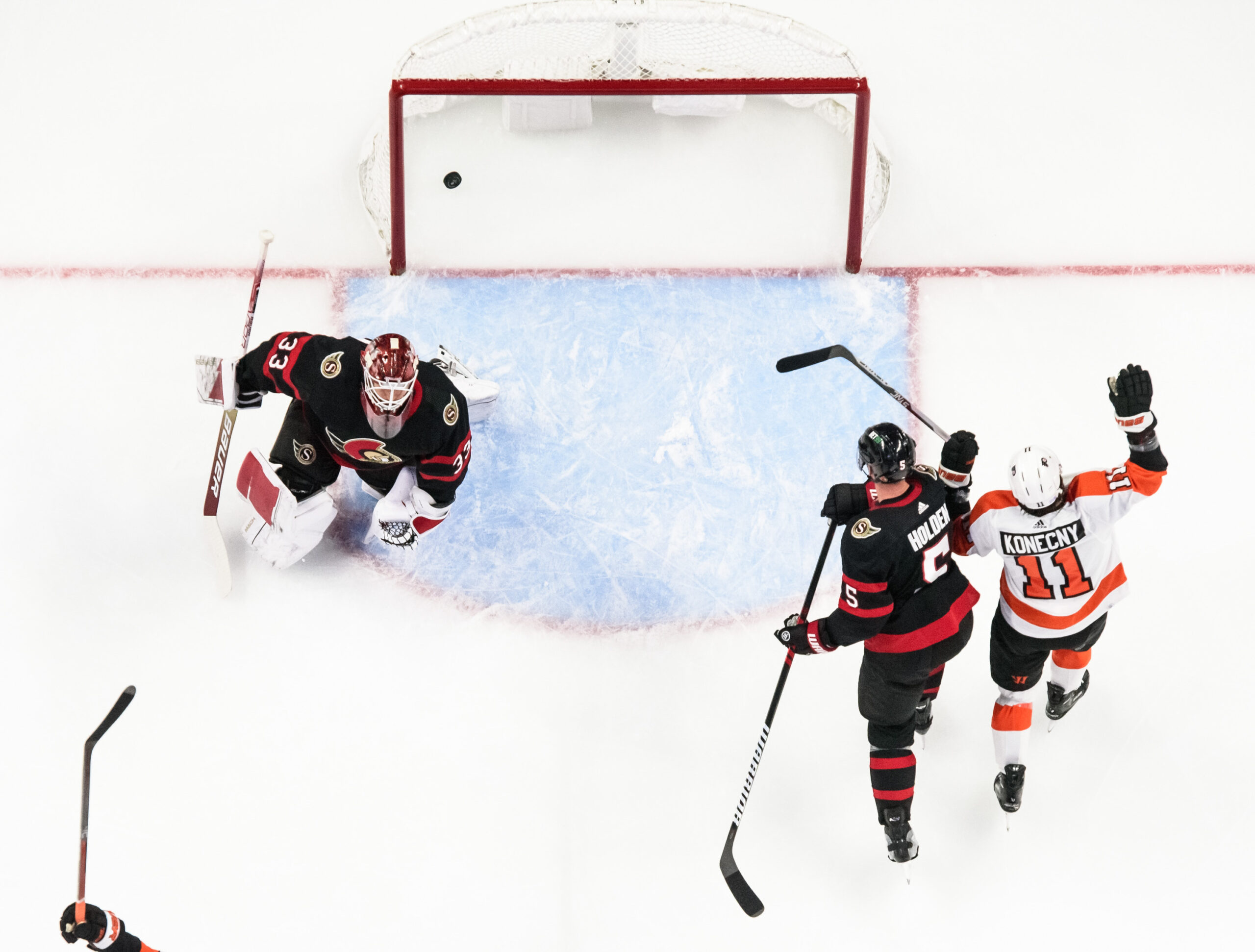 The storyline once again was Carter Hart’s performance between the pipes as the young netminder collected his 6th win to remain unbeaten in regulation with a close 2-1 victory over Ottawa.

In Claude Giroux’s first game against his former team, he scored the game’s first goal just 2:44 into the first period but then the Flyers responded back with goals from Kevin Hayes and the eventual game-winner from Zack MacEwen late in the second period.

Hart stopped 32 shots, improved his record to 6-0-2, and got some help from some pretty good penalty killing at critical junctures of the hockey game.

With a few days in between games, the John Tortorella and the Philadelphia Flyers made a few lineup changes ahead of their tilt against the Ottawa Senators. Rasmus Ristolainen was a healthy scratch and made his way out of the lineup for Justin Braun who was held out of their game against Toronto on Wednesday. Egor Zamula started the game with Travis Sanheim and Braun returned to the third pair with Nick Seeler. Morgan Frost was brought back in the lineup for Kieffer Bellows and was centering the fourth line with Tanner Laczynski and Nicolas Deslauriers. Tortorella kept some of the lines together from the third period against Toronto with Owen Tippett featuring on the top line with Kevin Hayes and Travis Konecny and then Scott Laughton centering Wade Allison and Joel Farabee to complete the top-six.

And as fate would have it, former captain of the Flyers in Claude Giroux opened the scoring with a tic-tac-toe play with Tim Stutzle and Brady Tkachuk. Giroux had the first shot of the game as well that was stopped by Carter Hart, however his second opportunity found its way past the goaltender as a costly turnover in the offensive zone led to a perfect breakout for the Ottawa Senators. The goal also represented Giroux’s 300th of his career.

With the Senators up 1-0 on the scoreboard and 6-0 on the shot-clock, the Flyers found themselves fortunate that Thomas Chabot got called for a high-sticking minor to quell a little bit of their momentum. 5 seconds into the power play and with their first shot of the game, Tony DeAngelo’s simple shot from the point got deflected by Kevin Hayes and past Cam Talbot in his first start as an Ottawa Senator – incidentally his first shot as a Senators starter as well. All the Flyers had to do was to simplify their game and they did just that by winning the faceoff and firing the puck towards the traffic in front of the net.

Hayes scored 5:17 into the first period and the shots were 6-1 for the Senators at that point. The next five minutes provided end-to-end hockey that resulted in no shots on goal for nearly 5 minutes until – yet another former Flyer – Derick Brassard took a weak shot towards Hart who gobbled it up for the whistle as we headed into the second commercial break of the period.

The fourth line for the Flyers had the best shift of the game to that point as they pinned the Senators skaters in their own zone for almost 90 seconds, unfortunately all their shot attempts were either blocked or missed the net.

The Flyers had two breakaway opportunities that were stunted by good defensive plays by the Senators with Travis Konecny having his chanced poked away by Chabot and then Hayes being pushed off by Nick Holden. The Senators had a breakaway opportunity of their own from the rookie of the Month in October in Shane Pinto, but Carter Hart blockered his shot aside to keep the score at 1-1.

In the waning moments of the first period, Giroux, Brassard, and Brady Tkachuk were swarming in the offensive zone and were going right into the blue paint and had Hart slipping and sliding. Chabot had 3 chances, all of which were either blocked or missed the net, and at the end of the shift a scrum broke out in front of the net as Travis Sanheim and Tkachuk were tied up in front of Hart with the former getting the only penalty, which was determined to be a holding minor.

To start the second period the Flyers were able to kill off the penalty with only one shot on goal against but shortly after, Nick Seeler was called for a hooking minor, sending the Senators back on the man advantage. Similar to the first kill, the Flyers killed it off successfully with the Senators only registering one shot on goal.

After two successive kills, the Flyers found themselves on their own power play, their second of the game after capitalizing five seconds into their first one. The Flyers had an early shot on goal but couldn’t do much of anything afterwards and things went from bad to worse as Zack MacEwen was called for an interference minor with 14 seconds left. Tim Stutzle killed off a considerable amount of time before the penalty as the Flyers were very sloppy in their own zone.

Scoring chances were once again hard to come by for the Orange and Black but with Carter Hart keeping the score tied at one, the Flyers created some of the more dangerous chances on consecutive shifts after Kevin Hayes walked in the slot but was robbed by the pad of Cam Talbot, which was then followed up by a scoring chance for Tanner Laczynski in the blue paint.

Unfortunately, Lukas Sedlak was called for an interference minor on Stutzle, awarding the Senators their 4th power play of the game and 3rd of the second period. The Flyers killed off their 4th successive penalty as they kept getting better by the opportunity.

With the Senators falling into the Flyers neutral zone trap and lull, the Flyers capitalized as they have all season with an opportunistic shift from the third line. Zack MacEwen, who has been playing some of the best hockey of his career since being recalled, ripped a shot top shelf past a discombobulated Cam Talbot.

The initial shot was blocked by Mark Kastelic with MacEwen scooping up the loose puck and then firing it past Talbot to give the Flyers a 2-1 lead with less than two minutes to go in the period.

Owen Tippett had a breakaway with only a few seconds left after Stutzle coughed up the puck in the offensive zone. Unfortunately, Tippett didn’t have much time to make a move or get a better shot on goal but the puck was stopped with some difficulty from Talbot. The Flyers nevertheless held a 2-1 lead heading into the final frame with Carter Hart doing Carter Hart things in goal.

The prize of the offseason for Ottawa in Alex DeBrincat has struggled a little in terms of goal scoring as he came into the game with just two goals on the season. To start the third period he was absolutely robbed by Hart in a very dangerous spot in the slot as Konecny failed to cover his man.

The Senators, who fell into a little bit of a lull in the second period, starting picking things up in the third with several scoring chances but with 14:57 remaining in regulation, Nikita Zaitsev was called for a cross-checking minor. It was another disappointing man advantage opportunity as the Flyers were outshot by the shorthanded Senators.

With a pretty good penalty kill, the Senators came back with a ton of momentum and incidentally a lot of scoring opportunities as Carter Hart was tasked to come up big yet again. Brady Tkachuk, Claude Giroux, and Erik Brannstrom had chances of their own right and then on the next shift it was Derick Brassard and Mathieu Joseph almost connecting from behind the net. However, the common denominator with all these chances was Hart being in the right place at the right time, keeping the slim lead at 2-1.

With 7:01 left in the third period, Sanheim was called for an interference minor as he pushed Giroux off the puck. It looked like a simple box-out but the referees deemed it to be enough of a pick to call it an interference penalty.

The temperature of the game, Giroux, and the fans changed dramatically after that penalty was called as the Senators were playing with a little more “umph”, which then made the Flyers match that effort – especially Nick Seeler after finishing off a clean body check on DeBrincat and then block a hard slap shot after Giroux set up Chabot.

The Senators kept coming in waves, shift after shift, and with the goaltender pulled with less than 2 minutes remaining, Hart was the hero once again as he was able to shut down every chance thrown his way – and there were plenty. Giroux was behind everything with the extra attacker, but the Flyers also deserve a little credit for getting their sticks in the lane and making the Senators fumble with some of their chances.

Carter Hart made 32 saves for his 6th win of the season as the Philadelphia Flyers ended their road trip going 1-1-1.

The Flyers will head home and welcome Brayden Schenn and the St. Louis Blues to Wells Fargo Center on Tuesday night.