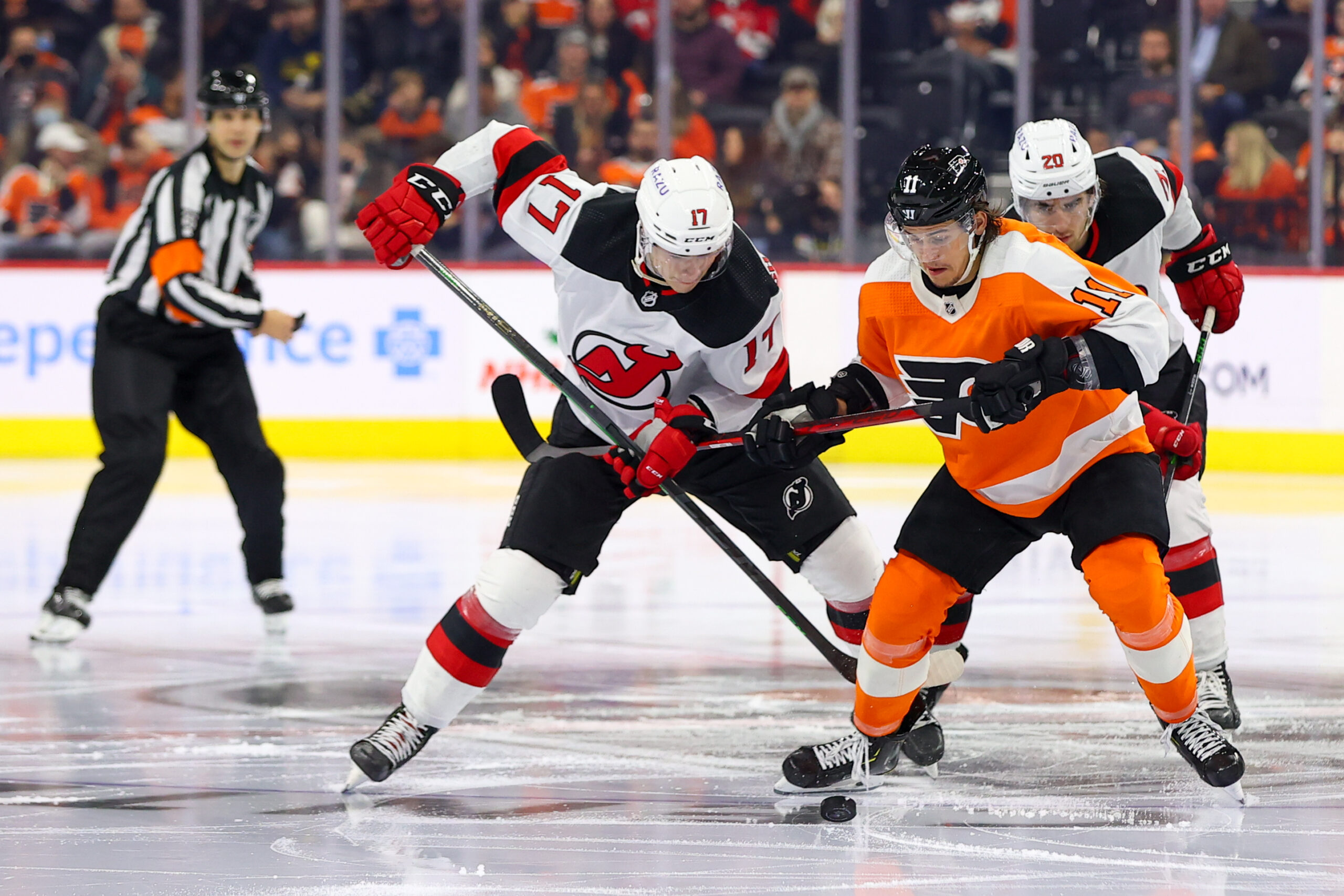 The Philadelphia Flyers’ season will open up on October 13th at Wells Fargo Center when they play host to their longtime rivals in the New Jersey Devils.

While things are not going very swimmingly in Flyerland right now, between general manager Chuck Fletcher’s ineptitude and Philadelphia seemingly shaping up for another bottom-feeding season in the standings, hockey is a weird sport and who knows, maybe the Flyers could actually put themselves together and win a little more than we expect.

Today, we’ll take a look at ten key dates in the Flyers’ 2022-23 season that feature marquee matchups, intense rivalries, and plenty of homecomings.

The Flyers open their season at home for the second consecutive season, and it happens to be the season’s first of four installments of the Battle of the Turnpike. Philadelphia went 1-2-0 against New Jersey last season, with the lone victory coming on December 14th, 2021 as Cam Atkinson’s hat trick paced the Flyers in a 6-1 rout at Wells Fargo Center.

The Devils haven’t won in Philadelphia since May 1st, 2021, and games between these two teams are always scrappy and bruising, and just mean a little more than other games. This game will also mark John Torotorella’s debut as Flyers head coach, and if you remember his time with the New York Rangers, you know he’s no fan of the Devils either.

San Jose’s only visit to Wells Fargo Center this season will mark Oskar Lindblom’s return to Philadelphia. Lindblom was placed on buyout waivers by the Flyers and subsequently signed with the Sharks on July 13th on the first day of free agency. Lindblom was drafted by the Flyers in 2014 and made his NHL debut with the team in 2018.

He served, and continues to serve, as an inspiration after courageously winning his battle with Ewing’s sarcoma and remains a fan favorite amongst Flyers fans. When Lindblom returns, expect an emotional welcome back and a loud, standing ovation from the crowd.

Head coach John Tortorella and associate coach Brad Shaw will make their returns to Nationwide Arena for the first time since departing the Blue Jackets’ coaching staff at the conclusion of the 2020-21 season. Tortorella took over for the fired Todd Richards ten games into the 2015-16 season and never looked back, becoming the longest tenured and winningest coach in Columbus history.

Tortorella racked up a 227-166-54 record in 447 games behind the Columbus bench, and he also led the franchise to four postseason appearances from 2017 to 2020, including the first playoff series victory in franchise history in 2019 when the Blue Jackets swept the heavily favored, Presidents’ Trophy-winning Tampa Bay Lightning in one of the most revered upsets in NHL history.

Shaw served as an understudy on Tortorella’s staff from 2016 to 2021. He helped manage their defensemen and penalty killing unit, which tied for the league lead in penalty kill percentage in 2018-19. Both coaches will be welcomed back to Columbus with a loud ovation.

This may be the most emotional game the Flyers play all season. November 12th will mark Claude Giroux’s first visit to Philadelphia as an opposing player after spending 1,000 games across 15 seasons with the Orange and Black. Giroux among all-time Flyers ranks is 2nd in games played (1,000), 8th in goals (291), 2nd in assists (609), 2nd in points, (900), 1st in power play points (339), and served as the 19th captain in Flyers history from 2013 to 2022, the longest tenure in franchise history.

Giroux was the face of the franchise for over a decade and provided the organization and this fanbase with enough amazing memories to last a lifetime, and there won’t be many dry eyes in the house when he makes his long awaited return to the city he called home for 15 years.

The Flyers’ annual Black Friday game at Wells Fargo Center will welcome the intrastate rival Pittsburgh Penguins to town. Deemed one of the greatest rivalries in the league, and perhaps all of sports, this will mark Pittsburgh’s first visit to Philadelphia this season in what will likely shape up to be a very physical and demanding matchup.

The Flyers and Penguins will face off against each other three times this season, and after going a measly 1-2-1 last season, the Flyers will try to even the score in this year’s Battle of Pennsylvania.

The defending Stanley Cup champions will visit Philadelphia on December 5th. There’s always a chip on the shoulder of an opposing team when they play the reigning champions, and the Flyers beating a team of that caliber would do wonders in terms of morale in the locker room and perhaps for the fanbase as well.

This game also happens to fall on the one-year anniversary of Alain Vigneault’s final game as Philadelphia’s head coach before his firing, and against the team that beat Mike Yeo in his Flyers head coaching debut on December 6th. Time flies.

Not only will the Flyers get a taste of reigning league MVP Auston Matthews and the always-dangerous Maple Leafs, but this will begin a five-game road trip for Philadelphia that will stretch until January 2nd, their longest of the season. The Flyers have road dates on the 22nd against Toronto, the 23rd against Carolina, and then they’ll begin a short holiday break before heading west for their annual Pacific coast road trip while Disney on Ice is in town. They’ll take on San Jose on December 29th, Los Angeles on New Year’s Eve, and then Anaheim on January 2nd before heading home.

A road date against former Flyers bench boss Dave Hakstol’s Seattle Kraken will be the start of Philadelphia’s four-game Pacific Northwest road trip, as they will also face Vancouver on February 18th, Calgary on February 20th, and Edmonton on February 21st before returning to Philadelphia. The Flyers went 3-1-0 in the buildings on this road trip last season, losing only at Scotiabank Saddledome to the Flames in a 4-0 shutout in late October. Overall, Philadelphia went 5-2-1 against these four clubs as well last season, including a season sweep of Seattle, and hopefully that success will carry over into this coming year.

The Golden Knights’ lone visit to Broad and Pattison this season kicks off the longest homestand the Flyers will have on the schedule this season, as the Flyers will host seven games in a row before playing on the road again. Philadelphia will host Vegas, Buffalo, Carolina, Florida, Minnesota, Detroit, and Montreal as they enter the last 30 days of the regular season with a slew of those teams likely to contend for postseason berths, giving the Flyers a chance to show their mettle and perhaps claw away in the Eastern Conference standings.

This will also be a battle of teams led by new head coaches as new Flyers hire John Tortorella will try to outsmart Bruce Cassidy, who was shockingly let go by the Boston Bruins at season’s end and was subsequently hired by the Golden Knights.

This will mark the end of the Flyers’ regular season campaign when they travel to the Windy City to take on the Blackhawks. Both teams will probably be contending for 32nd place in the standings, so this may be a last ditch effort to try and get in position to win the Connor Bedard sweepstakes.

Will Game 82 provide some drama? Will the Flyers close out the season with a victory? Will Chuck Fletcher still be the general manager at this point in the season? Who’s to say, really.

Recap of Day 1: Misery Loves Company
With the Metropolitan Division Beefing Up This Summer, John Tortorella Has His Work Cut Out For Him