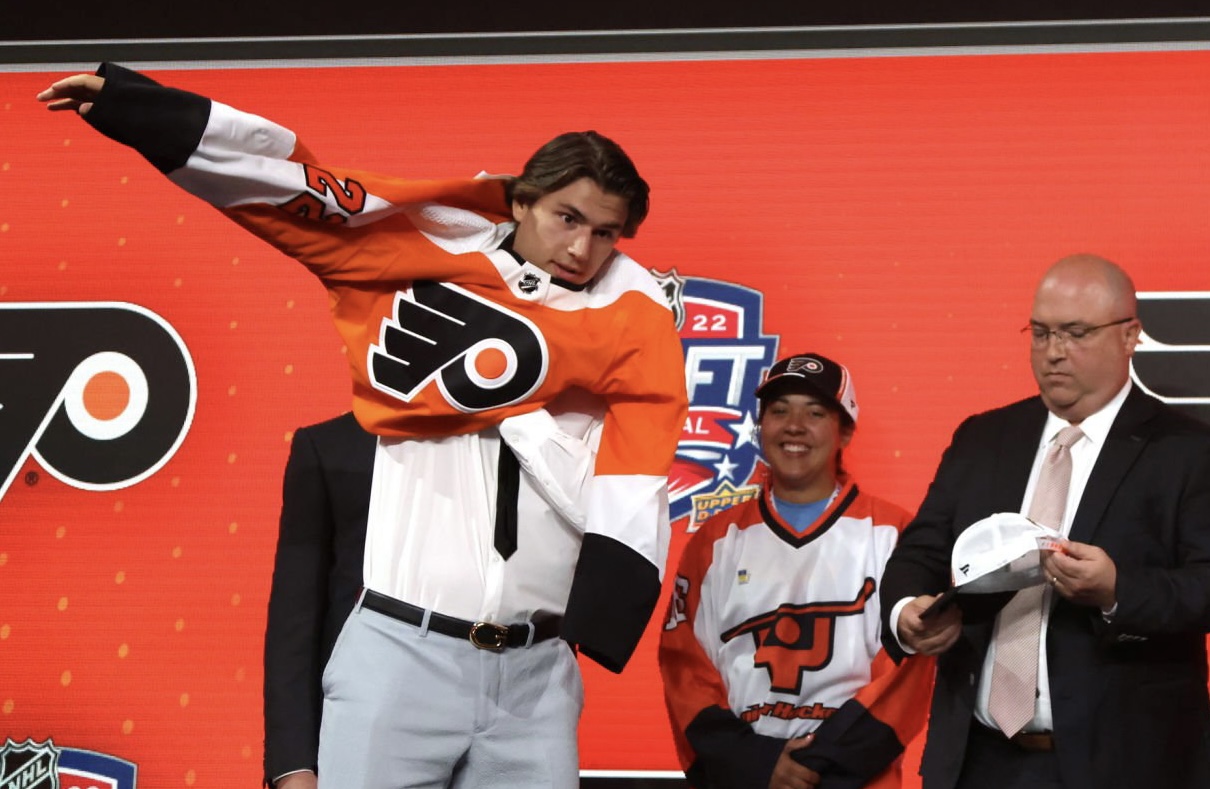 Yesterday was the second and final day of the 2022 NHL Draft, and the Philadelphia Flyers were very active over the last few days in Montréal.

Philadelphia selected six players and made a very polarizing trade before the second round began, and there’s plenty of conversation about the team happening now. After a busy week in Québec’s largest city, let’s take a look at how the Flyers fared over the course of the draft.

Round One – Cutter Gauthier

After an eventful opening to the draft on Thursday that saw Juraj Slafkovský go first overall to the Montréal Canadiens and former projected top pick Shane Wright fall all the way to the Seattle Kraken with the fourth pick, the Flyers selected Cutter Gauthier with the fifth overall pick in the draft.

Gauthier is advertised as a large and efficient two-way forward with a lethal shot. He chalked up 53 goals and 40 assists for 93 points in just 76 combined games between the USNTDP Juniors and U.S. National U18 Team. He also registered 3 goals and 6 assists for 9 points in six games at the U18 World Junior Championships while serving as an alternate captain for the Americans.

Trading for Help on the Blueline – Tony DeAngelo

As day two began today, the Flyers made a major yet puzzling move, as they traded for and extended the always controversial Tony DeAngelo from the Carolina Hurricanes. Not only are the Flyers facing a fury of much deserved backlash with the move, but their cap situation is even more bleak than it was before the deal was made.

Off the ice, this clearly wasn’t a popular move and for a lot of reasons, deservedly so. On the ice, it may work as the team has another player to generate offense from the back end, but time will tell. The Flyers shipped three picks to Carolina and got a seventh rounder in this year’s draft back as well in the trade.

The Flyers’ first pick of day two came in the third round at 69th overall, and the team selected forward Devin Kaplan, a nice addition to the organization who was teammates with Gauthier in the USNTDP. Kaplan racked up 21 goals and 35 assists for 56 points in 75 combined games with the USNTDP Juniors team and the US National U18 Team. Kaplan will be attending Boston University this season, the former college home of Joel Farabee.

Philadelphia did not have a fourth round pick as they traded it in the DeAngelo deal, so the Flyers’ next selection came in the fifth round at pick 133. Winger Alex Bump was Philadelphia’s selection, who was coming off a dominant high school season followed by an impressive rookie campaign in the USHL with Omaha. Bump scored a whopping 48 goals and 83 points in just 31 contests as captain of Prior Lake High School’s team, and followed that up with 17 points in 27 games with the Omaha Lancers. Bump will enroll at Vermont beginning in 2023-24.

Hunter McDonald became the first defenseman selected by Philadelphia at pick 165 in the sixth round. A hulking 6’4”, 207 pound blueliner from Fairport, New York, McDonald racked up 4 goals and 10 assists for 14 points in 54 USHL contests with the Omaha Lancers and Chicago Steel. He also tacked on 87 penalty minutes and is not afraid to throw his body around. The Flyers certainly drafted with the mindset of getting bigger and more physical within their pipeline, and McDonald fits that mold perfectly. The 20-year-old will spend the 2022-23 season patrolling the blueline at Northeastern.

The Finnish forward was taken with pick 197 after enjoying a successful season within the ranks of Jokerit’s junior clubs. He primarily played with Jokerit U20 in U20 SM-sarja, potting 13 goals and 19 assists for 32 points in 35 games. He also made four appearances with the Finnish U18 team, racking up a goal and assist.

Sulku will play with Sweden’s MoDo Hockey J20 in J20 Nationell next season to continue growing his game, and the 18-year-old once again fits the bill the Flyers were looking for in size, as the Helsinki native stands at 6’4” and 194 pounds.

Gendron rounded out Philadelphia’s 2022 draft class, as he was taken 220th overall by the Flyers with the 7th rounder they acquired in the Tony DeAngelo trade.

Gendron just finished up his second QMJHL season with the Blainville-Boisbriand Armada, recording 30 goals and 16 assists for 46 points in 66 games. His 30 tallies paced the club and it marked the first time since 2017-18 that an Armada player scored at least 30 goals in a single season.

Standing at 5’10” and 174 pounds, the Côteau-du-Lac, Québec native is a little smaller than his fellow Flyers draftees, however he possesses the speed and offensive ability to potentially be a good, serviceable NHL player someday.