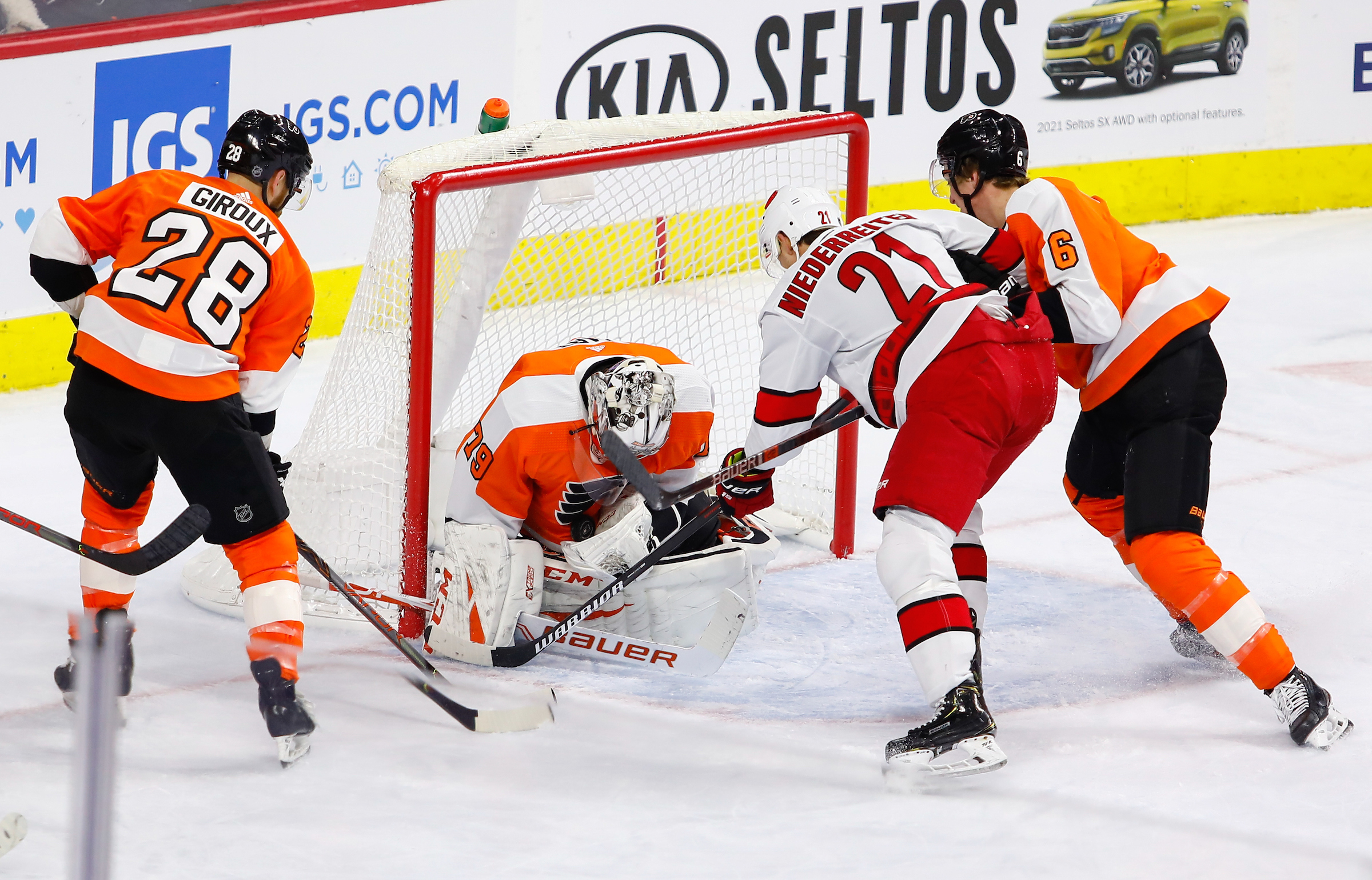 The Philadelphia Flyers will play their second game in three nights and what will be their third game in four nights as they take on the top team in the Metropolitan Division, the Carolina Hurricanes.

Carolina has 10 wins in 11 games with 20 points, second-most in the NHL. The Hurricanes have not played since defeating the defending Stanley Cup champion Tampa Bay Lightning by a score of 2-1 on Tuesday. Carolina is well rested for this home game against a Flyers team who has scored only nine goals in the past six games.

Both teams are dealing with injuries. Ryan Ellis is still out for Philadelphia and will not play tonight, but he could potentially play tomorrow in Dallas. Kevin Hayes could also play on this road trip at some point, but it’s more likely he doesn’t play until Tuesday.

Carolina is without top pairing defenseman Brett Pesce, backup goaltender Antti Raanta, and top-six forward Nino Niederreiter. Martin Necas is also dealing with an illness and he did not participate in morning skate for the Hurricanes, and he is a game-time decision.

The Hurricanes are a deep and talented team even with the aforementioned injuries. They are led by their coach, former Flyer and my favorite player growing up, Rod Brind’Amour. Carolina has four players with a point per game or more, including former Ranger Tony DeAngelo.

Somehow the entire Hurricanes team has positive Corsi numbers with the exception of Brendan Smith. It is only 11 games into the season but that is remarkable. Despite losing Dougie Hamilton, one of their top players in free agency, there has not been a negative effect to start the season.

The one area where Carolina has been held back in the past is their goaltending. This year, new acquisition Frederik Andersen has been lights out. He has 1.73 goals against average and .939 save percentage. They’re also scoring on 25.0% of their power plays and their penalty kill is at 86.0% which is well above average.

It seems obvious right? The key to sports. Against a team with no obvious weaknesses, the best way to win is to keep it simple and get pucks to the net. Get the puck north and south and challenge the puck carriers at the blueline. The Flyers have done a good job of disrupting the opposing offense at their own blueline, and now they need to break out of their offensive funk and turn those opportunities into goals.

The only team to beat Carolina this year was the Florida Panthers, and they did it by scoring three goals on five power play opportunities. The Flyers must capitalize on every chance to score.

The Flyers are better when they play with aggression and hate. The Flyers have been sticking up for each other and need to ratchet it up. Anyway, to get the Hurricanes off of their game, tell the fourth line to set the pace. Play the dump and chase game and hit everything that moves. Wear the Hurricanes down. They don’t have to return to being the Broad Street Bullies but they can play with physicality and bend teams to their will on any given night.

Personal story: I was heartbroken at age 10 when my Philadelphia Flyers traded Rod Brind’Amour, one of the Flyers top goaltending prospects at the time in Jean-Marc Pelletier, plus a 2nd-round pick to Carolina for Keith Primeau and a 5th-round pick. Primeau had never had a year with more than a point per game in his career while Brind’Amour had three. Primeau was only a year younger than Brind’Amour. I hated this trade when it happened.

Primeau was a good acquisition but not at the expense of Brind’Amour. Primeau had a heroic run during the 2004 Stanley Cup Playoffs. He was a man on a mission. Brind’Amour won a cup as the captain with Carolina plus two Selke Trophies as the best defensive forward in the NHL. This could’ve been a rare trade that worked out for both teams if Primeau did not get injured.

Flyers Hall of Fame Alumni Game Lineups Announced
Is it Finally Time to Worry or Are We Still Too Early in the Season?