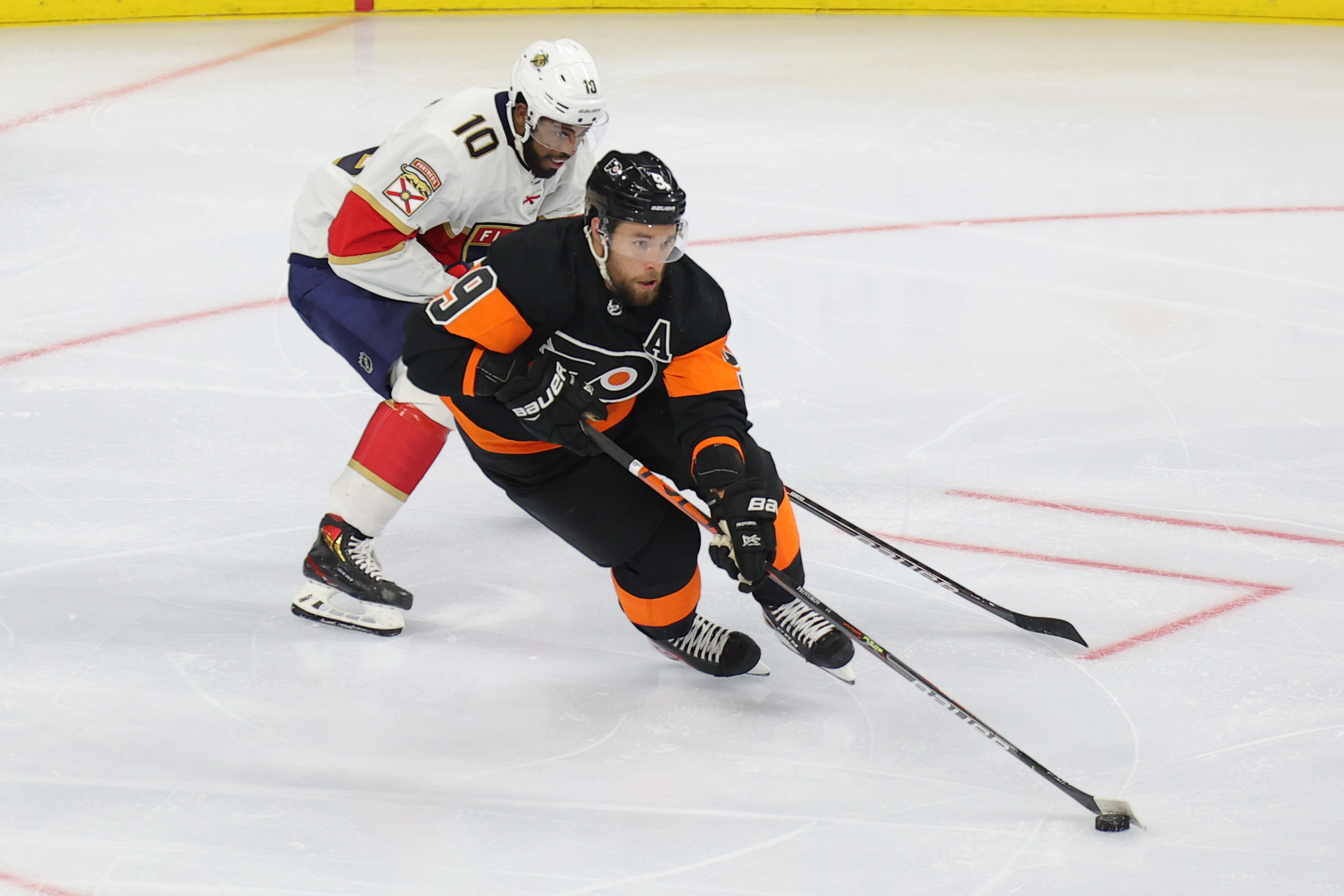 Is it Finally Time to Worry or Are We Still Too Early in the Season?

It was a problem last week and it’s still a problem today. The Philadelphia Flyers offense has gone completely dry in their last 8-9 games and even though they’re missing a few players from their lineup, it stems from the way they’re playing and how they’re executing their offensive opportunities.

Kevin Hayes and Wade Allison being injured in the pre-season hurt the Flyers’ depth considerably. Hayes was slated to play second-line center and Wade Allison had the opportunity to crack the top-nine. In their absence, Morgan Frost was supposed to take the reins but he couldn’t capitalize on his opportunity in the pre-season. In came Derick Brassard, who at one point was battling for a roster spot, and he performed admirably in the first 3-4 games.

The second line that featured Brassard in between Joel Farabee and Cam Atkinson provided the top line of Claude Giroux, Sean Couturier, and Travis Konecny with the depth and balance they so desperately required. Farabee recorded 3 multi-point games to start the season, Atkinson had 6 goals in 5 games, and Brassard had 6 points in 5 games. Since then, they’ve combined for just one goal.

The top line has been fantastic so far, essentially representing the only line that can not only create offensive opportunities but bury them as well. Giroux and Couturier both lead the Flyers in points with 12, with Giroux collecting a point in every game the Flyers haven’t been shut out in. While Couturier silently leads the way with 4 multi-point efforts. Konecny sits third on the team with 8 points.

With both lines producing, the Flyers were scoring at will and averaged nearly 5 goals per game. In their last 8 games, with the other lines barely producing, the Flyers have scored a whopping total of 16 goals. The Flyers abandoned their aggressive brand of hockey for their old and tired dump and chase habits.

A BAD CHANGE IN PLAY, EVEN WITH INJURIES

They’re peppering shots towards the goalie, but they are shots that the goalie can see the whole way through or from the point with no screens. They’re being held to the outside and even if they took 36 shots against the Toronto Maple Leafs or 38 against the Pittsburgh Penguins, barely any of them were true high-danger opportunities.

An argument can be made that because the Flyers have been without the services of Hayes, and for the most part Ryan Ellis, a 6-3-2 record is impressive. In fact, it is an impressive record all things considered, and the Flyers should be happy with their efforts. However, that argument can only take them so far because the Flyers have faced off against a Washington Capitals team without T.J. Oshie, Nicklas Backstrom, and Anthony Mantha, a Penguins team without Sidney Crosby, Evgeni Malkin, and Bryan Rust, and a Maple Leafs team without John Tavares.

The Flyers don’t have the right players to play a dump and chase type of game. The first line is fast and skilled enough to manufacture chances at will, the second line is being trudged along now with Brassard slowing things down, the third line is equipped with the right ammunition but can’t seem to find the back of the net, and the fourth line is doing what is required of them.

When James van Riemsdyk is the one chasing a dump-in by Scott Laughton, odds aren’t great that the Flyers are going to win that battle. Wayne Simmonds, Brayden Schenn, and even Jakub Voracek were better built and equipped with dump and chase duties due to their physicality, speed, and size. The current Flyers lineup outside of Laughton, Konecny, and the recently waived Nicolas Aube-Kubel should find different ways in creating offensive opportunities.

The power play is a source for teams to tack on insurance goals throughout the game but the Flyers, especially power play coach Michel Therrien, are anemic at best. For whatever reason, he is hellbent on the idea that Ivan Provorov should remain the top unit’s quarterback. He is skilled, young, and oozing with talent, but as of right now he needs to remain away from the power play. He slows down the play, holds onto the puck for far too long, has trouble keeping the puck in the zone, and makes predictable plays that either lead to odd man rushes going the other way or easy clears.

The Flyers power play is 2 for their last 21 attempts and in their most recent game against the Maple Leafs, they couldn’t produce a scoring opportunity in 4 chances. Their performance stunk and the Philly faithful let them hear it every step of the way. Alain Vigneault and Michel Therrien finally brought Keith Yandle back to the top unit and it instantly yielded scoring opportunities.

Yandle is an offensive defenseman who has spent his entire career quarterbacking several successful man advantage units. What he lacks in the defensive arena, he brings it back in offense and the power play specifically. When the Flyers power play was clicking early on in the season, it was in large part because of Yandle’s efforts.

Ahead of their game against the red-hot Carolina Hurricanes, the Flyers changed their lines a little bit. Oskar Lindblom goes from playing with Scott Laughton and James van Riemsdyk to being on the wing with Derick Brassard and Cam Atkinson. Meanwhile, van Riemsdyk finds himself with Laughton and Joel Farabee; a trio that previously clicked before the COVID interruptions in 2019-20.

Kevin Hayes, who is nearing the end of his stay on LTIR, has been practicing lately and is possibly set to return as early as tomorrow against Dallas, but it’s a bigger possibility that he returns Tuesday when the Flyers host the Calgary Flames. Ryan Ellis is also nearing a return to the lineup after missing the last 8 games going on 9 with a lower body injury. His two-way play has been sorely missed, primarily his ability to create offense.

The schedule only gets tougher with games against the Flames, Boston Bruins, Florida Panthers, and Tampa Bay Lighting (twice) among others upcoming. The game against Toronto was a rude awakening of what can happen if the Flyers don’t figure out their offensive woes against top teams. They were kept to the outside, passed up several high danger opportunities, and barely tested Jack Campbell with anything too severe.

Vigneault has the penchant of changing lines on the fly when the team is struggling, but he hasn’t had that luxury yet with the injuries to Hayes and Allison. He can’t break up the top line because they’re the only ones producing and the fourth line plays their role well and shouldn’t feature anywhere else in the lineup.

Both second and third lines have had their opportunities but no success where it matters. Brassard’s play of late reminds us that he’s a better fit in the bottom-six than in the top-six. Nevertheless, he has filled in admirably for Kevin Hayes, who the Flyers desperately need to return. Even upon his return, how much is to be expected from someone who hasn’t played a hockey game since May?

A STACKED DIVISION AND FIXING THE PROBLEM

At least with Ryan Ellis we know what he brings to table and we’ve felt his absence dearly. Ever since he’s been out of the lineup, the offense has stagnated and it’s not a coincidence. The Flyers are a team that likes to attack from the defense up. Ellis, Provorov, Travis Sanheim, Rasmus Ristolainen, and Yandle are all offensive players who can aggressively start the rush at any given moment. The change in defense pairings has stagnated that, and in doing so the offense has reverted back to dumping and chasing.

It’s still early in the season and the Flyers are 6-3-2 when all is said and done. The Metropolitan Division is yet again a tough place to be and every loss, even this early on, seems like a heavy bullet. The 5-4-2 New York Islanders are in last place with the Flyers not too far ahead of them. Once all the intra-division games take place, the teams won’t be as squished and tight as they are now, however it’s still remarkable that every team is above hockey .500.

The Flyers have been getting great goaltending from Carter Hart and Martin Jones, for the most part the defense has been playing fantastic with Sanheim and Ristolainen finding their groove as the second pair, and the penalty kill has been a lot better this year than last. The offense looks good on paper, they’re technically getting a lot of shots, but they’re struggling with high-danger opportunities and finishing off scoring chances.

The offense will eventually settle and start producing at will, but for now the offensive woes are worrisome. The Flyers have more than enough talent to break out for a big game this weekend, and they’re going to need it against the 10-1-0 Hurricanes and the Stars. As long as the first line keeps producing, the Flyers just need their depth to balance things out and help a little, whether at 5-on-5 or on the man advantage.