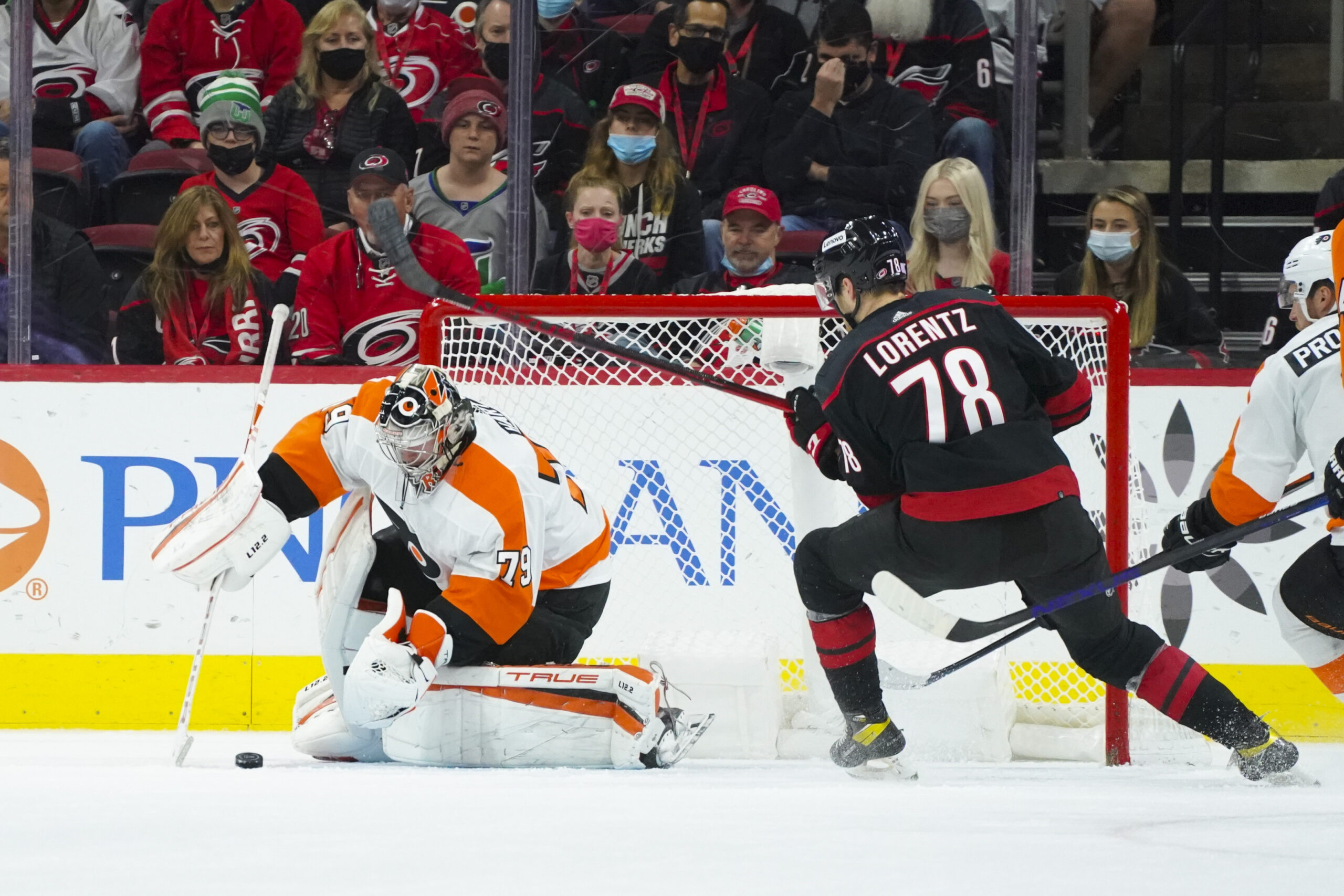 The Philadelphia Flyers prevailed in a hard fought game against the surging Carolina Hurricanes, winning by a score of 2-1. Carter Hart was absolutely sensational as he stopped 39 shots en route to being the backbone of this victory.

The Flyers got outplayed in the first two periods in nearly every statistical category, but the young netminder stood tall through it all and kept the Flyers within striking distance. Joel Farabee and Zack MacEwen scoring in the third period not only ended personal slumps of their own, but it broke a 128 minute goal-less drought the Flyers had from the second period of their victory over Washington last Saturday night.

This was always going to be a tough game for the Flyers, as the Hurricanes came into this one 10-1-0. The Flyers, who have struggled mightily in the last couple weeks with scoring, finally shuffled their lines prior to this one. Oskar Lindblom formed a trio with Derick Brassard and Cam Atkinson, while Joel Farabee, Scott Laughton, and James van Riemsdyk formed the third line.

The Flyers had a lot to say in practice about their 5-on-5 play and their power play, and it was on full display in the first half of the first period. They abandoned the dump and chase method and started attacking the line with more gumption. They had an early power play, but it didn’t produce any chances and it sort of took the sails out of their start.

The Hurricanes peppered Hart with scoring chances all period, none bigger than the breakaway coming out of the penalty box for Jordan Staal with three seconds left in the period. Not only was he stopped on the breakaway but his second effort was thwarted too. The Flyers had a great opportunity before the period ended to get on the board with a long 4-on-3 and then a subsequent short 5-on-3. They couldn’t get much done yet again as their power play woes continued.

The Hurricanes were the better team after one period, outshooting the Flyers 13-6 and almost as importantly winning 16 of 20 faceoffs. The common theme of the year is that Carter Hart’s goaltending and timely saves have kept the Flyers in the game, especially in tonight’s contest.

The second period was nearly identical to the first as the Flyers had their feet moving early on, but lost momentum and traction and the Hurricanes took over. It cannot be expressed enough times but Carter Hart was the theme of that period as it could’ve been 5-0 had it not been for some of his stops.

The Hurricanes opened the scoring at 11:14 by forcing a turnover in the defensive zone off the stick of Sean Couturier. He was being chased down by the defender in front of his own net, so he decided to flip it out of the zone but only got as far as the blueline. The Canes transitioned and ended up with a baseball-swing of a goal as Steven Lorentz batted the puck out of mid-air and past Hart.

Shortly after that, the Hurricanes were pressing again and made it temporarily 2-0 after Andrei Svechnikov’s shot hit the cross bar and bounced out to the stick of Seth Jarvis. The puck bounced in between both Flyers defensemen, Travis Sanheim and Rasmus Ristolainen, and Jarvis just had an open net to finish off the play. Luckily for the Flyers, Jarvis was initially offside coming into the zone and Alain Vigneault won his coach’s challenge to negate the goal.

The pressure kept mounting as the Hurricanes got two late power plays as Couturier and Farabee made separate trips to the penalty box. Funny enough, Farabee’s penalty was committed during the 5-on-4, but the Hurricanes dominated with puck possession so much that they had an abbreviated 6-on-4 for nearly 45 seconds with the goalie pulled.

Hart had to come up big yet again, and in the dying seconds of the period the Hurricanes had an open net to shoot at. Luckily Claude Giroux was able to block some of it and the diving body of Hart was able to save the deflection. The Hurricanes outshot the Flyers 15-7 in the second period and 28-13 through two.

The third period was a revelation of sorts as the Flyers came out flying. They were generating offensive opportunities and didn’t look like a team that hadn’t scored a goal in 6+ periods. 4:06 into the period, Scott Laughton sent the puck in off the end boards looking for a carom for the streaking Farabee. The play worked perfectly as Farabee was able to slide the puck through Frederik Andersen’s five-hole, tying the game and breaking the Flyers’ goalless streak of nearly 128 minutes.

Just over six minutes later, Zach MacEwen scored his first goal as a Flyer off a deflection from a Justin Braun point shot. The puck actually went off MacEwen’s stick and then off a Hurricanes defenseman, and then past a sliding Andersen. The Flyers, who couldn’t find the back of the net in nearly 2 games, scored 2 goals against a team that had only allowed 3 third period goals in their previous 11 games.

The third period became even more frenetic as Travis Konecny took an unnecessary interference penalty. They were able to kill the penalty but mostly thanks to fortuitous bounces and Carter Hart.

The Flyers were gifted a late power play but yet again, the man advantage turned momentum the other way for the opposition. The Canes had several more chances than the Flyers and Carter Hart had to come up with several close range stops while on the powerplay. The Canes just kept coming and coming but Hart would not budge as he shut the door with the net empty as well.

Joel Farabee and Zack MacEwen scored for the Flyers and Rasmus Ristolainen, Scott Laughton, Patrick Brown, and Justin Braun picked up assists. The Flyers power play was 0-for-5 but luckily enough their penalty kill was 5-for-5. Carter Hart was spectacular again as he stopped 39 of 40 shots to backstop his team to another win.

The Hurricanes’ lone goal came off the stick of Steven Lorentz with helpers from Jordan Staal and Jesper Fast. Every player on the Hurricanes registered a shot on goal, ironically enough except for Seth Jarvis, who’s overturned goal turned out to be the turning point of the game.

Up next for the Flyers are the Dallas Stars tomorrow night as Martin Jones is set to start in goal. With Nicolas Aube-Kubel placed on waivers earlier today, its a good sign that both Kevin Hayes and Ryan Ellis could potentially make their season debut and return, respectively, tomorrow night.