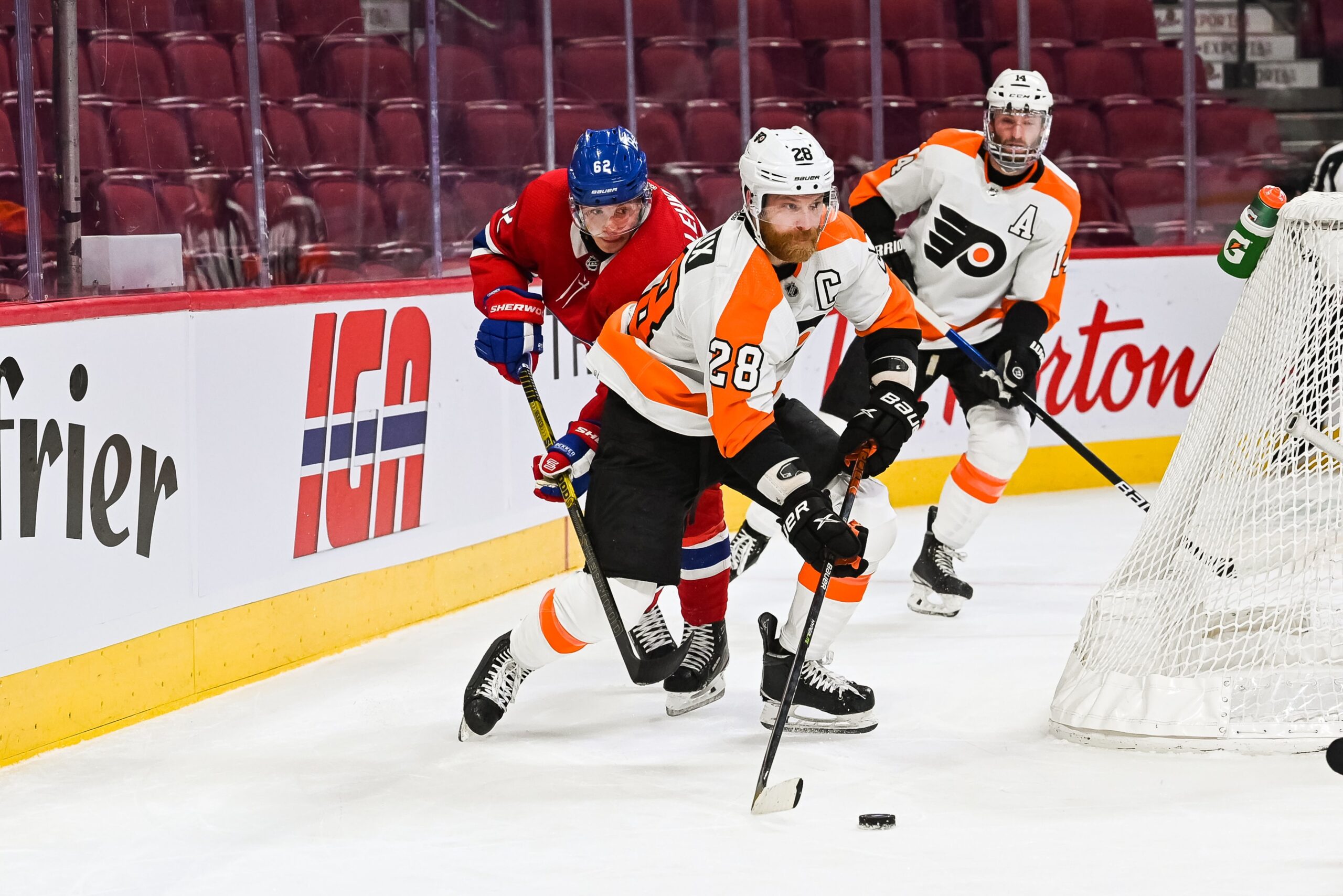 Looking for their fourth consecutive victory, the Philadelphia Flyers went all the way to the shootout, but were unable to seal the deal as Cayden Primeau and the Montreal Canadiens edged them out 3-2 after winning the shootout 1-0. It wasn’t the prettiest of games against a hungry team in an empty arena, but the Flyers do remain unbeaten in regulation in their last four (3-0-1).

In what felt like a sombre event, the Canadiens were the first team to score tonight with nary a fan in the stands. After forcing an early penalty against the Flyers, the Canadiens kept the pressure and momentum going even after the penalty was killed. Artturi Lehkonen scored his 4th of the season after the Flyers failed to get the puck out deep.

Travis Konecny cleared the puck out of his zone to Sean Couturier but it never reached his stick as the Canadiens deflected the clearance and brought it back into the offensive zone. After Carter Hart made the initial save, the Canadiens grabbed the loose rebound and set up once more from the point. A simple shot from Brett Kulak was tipped and deflected by Lehkonen.

The Canadiens kept the pressure going as the Flyers looked hapless and without much energy. What should have been a disadvantage for the home team, didn’t seem to bother them too much. The Flyers were being outshot 14-5 midway through the period and were forced to take another penalty as the Canadiens were buzzing around the net and Hart. The Flyers were lucky to escape the first frame only down 1-0 as they were outshot 19-8 with very little scoring opportunities or offensive zone time.

Needing a response after an extremely poor first period, the Flyers tied things up early in the second thanks to Max Willman after capitalizing on a couple Canadiens turnovers in front of the net. James van Riemsdyk stole the puck from Jeff Petry, and then found Willman who fumbled the puck himself but was aided by an Alexander Romanov turnover and fired the loose puck past Cayden Primeau.

One would’ve hoped that the tying goal would’ve given the Flyers some much needed momentum, but it did no such thing as the Canadiens just kept creating scoring chances and firing at will on Hart. This game, let alone the second period, could’ve been a different story had the Flyers netminder not been on top of his game, yet again.

The Flyers finally found themselves with some pressure in the offensive zone as they started throwing pucks towards Primeau and after stopping them several times, he wasn’t able to stave off Jackson Cates coming down the wing with less than a minute remaining in the period. A Travis Sanheim stretch pass was deflected in the neutral zone and a streaking Cates picked it up with speed and fired a wrister blocker side on Primeau. It was definitely a goal he would want back but the Flyers would take it any way they could get it.

It wasn’t exactly how the Flyers drew it up but all things considered they were extremely happy taking a 2-1 lead into the third period. The silver lining heading into the third period was that they had the lead and took six shots in the final few minutes of the second period.

The third period was a tale of two halves as the Flyers started the third period exactly how they would have wanted to, as they controlled most of the play through the first 10 minutes. All things considered, the Flyers welcomed a 4-4 tie on the shot counter as the game became a defensive/protect-the-lead type of affair. Willman had the best chance on a broken play in front of Primeau but the goaltender was able to get his pad on a wide open opportunity.

The final 10 minutes were similar to the first 30 for the Canadiens, as they controlled the play down one with scoring opportunities and offensive zone time. With 5:39 remaining in the period, Laurent Dauphin tied the game with a rebound goal, which was his first goal in five years. It was a quick play off a face-off win, as Ben Chiarot maneuvered his way around Kevin Hayes from the point to the sideboard and fired a shot right at Hart, who couldn’t control the rebound with several Canadiens right in front of him jamming away.

The Canadiens started overtime with a shot off the post, but the best chance to end the game came for the Flyers as they were awarded a power play after Ben Chiarot was called for roughing. The Flyers couldn’t do much with the man advantage and the best chance actually came from Chiarot, who came out of the box with a big blast into the belly of Hart.

Primeau tried sending the puck out of the zone as the Flyers were tired and changing but his pass was deflected by a jumping Cam Atkinson, he passed it to Konecny, who tried shooting blocker side maybe looking for a rebound but was stopped by the goaltender.

Jonathan Drouin was able to skate in with speed from the right side, slow down, and beat Hart with a bullet over the glove hand to net the only goal in the skills competition.

The Flyers received goals from Max Willman and Jackson Cates, while James van Riemsdyk, Kevin Hayes, Patrick Brown, and Travis Sanheim each nabbed an assist. Carter Hart stopped 38 of 40 shots in regulation and overtime and 2 of 3 in the shootout.

The Canadiens got goals from Artturi Lehkonen and Laurent Dauphin, plus a shootout goal from Jonathan Drouin, while Brett Kulak, Alexander Romanov, David Savard, and Ben Chiarot recorded assists. Cayden Primeau stopped 37 of 39 shots in regulation and overitme, while going a perfect 3 for 3 in the shootout.

Up next for the Flyers are the Ottawa Senators at the Wells Fargo Center on Saturday night as the Flyers look to push their points streak to five consecutive games.

Flyers to get new uniforms next season, per report