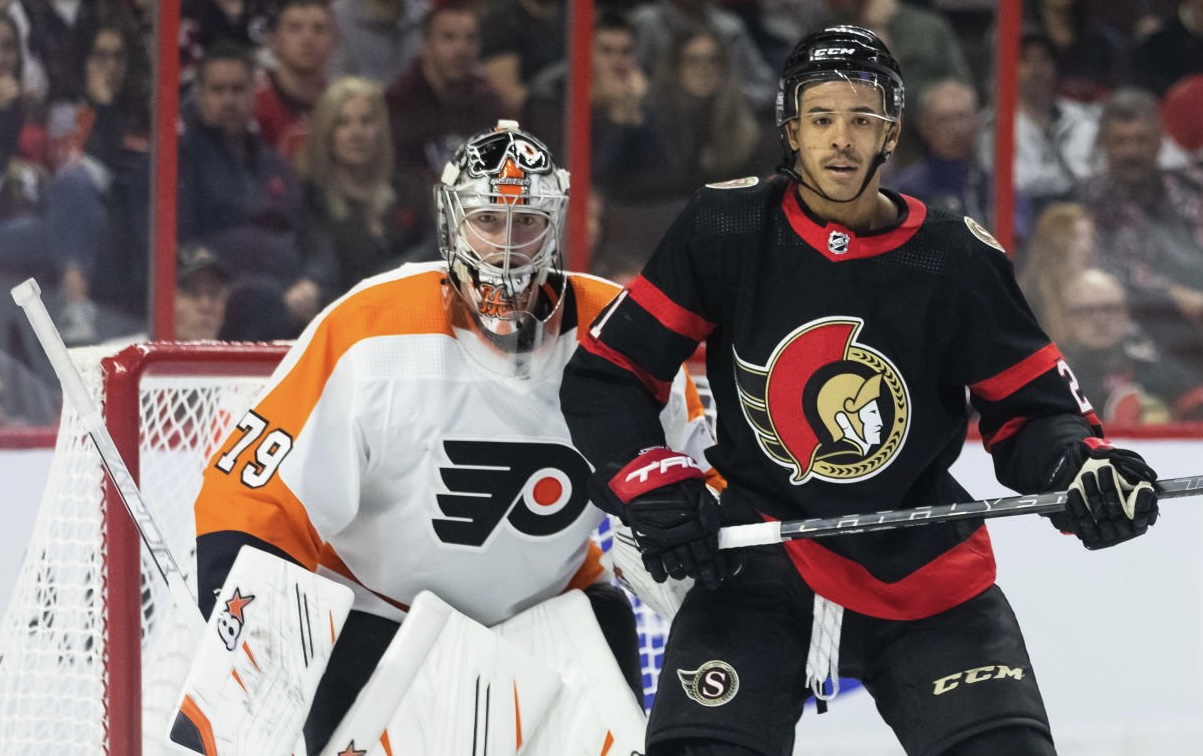 Flyers Ended Last Week With a Flourish After Tough Start

I’m not taking anything away from the Philadelphia Flyers’ first 7 games – a stretch in which they surprisingly won 5 games – but the two games against the New York Rangers and the Toronto Maple Leafs last week showcased everything we predicted and talked about over the summer.

It’s hard to blame the personnel on the ice and it’s very hard to blame the coaching staff because they’re doing everything in their power to play to a system and go hard every shift, every night. However, with the sheer lack of talent on the roster, the Flyers are going to get schooled on a near game-by-game basis if and when their goaltending ever falls from their lofty heights.

To start the season the Flyers were already behind the 8 ball after not doing much of anything over the offseason to improve what they believed to be a playoff team – “they” being the front office. Whatever the reasons were, they justified them to no end, and let bygones be bygones. So, we didn’t get Johnny Gaudreau, we kept James van Riemsdyk, got rid of Oskar Lindblom, and added depth pieces to a team that crashed and burned to the basement of the NHL last year. The saving grace for the 2022-23 Flyers was going to be the returns of Sean Couturier, Kevin Hayes, and (crossing fingers) Ryan Ellis.

The whole world, or at least those who cared about the Flyers, knew that whatever was being said or reported on in regards to Ellis was just a smokescreen. There was no way he was going to make a return without any kind of surgery taking place. Then it was reported to be a psoas tear, which is even worse than originally reported. However, the Flyers finally had a contingency plan in place and acquired Tony DeAngelo as his replacement.

Things only got worse when Sean Couturier suffered a setback and then subsequently opted for a second surgery in a span of 9 months. Cam Atkinson’s maintenance days turned into a day-to-day ailment then all of a sudden they blurted out that we shouldn’t worry about the prospects of it being a season-ending injury, which kind of came out of nowhere.

Fortunately Joel Farabee made a quick recovery from his injury, Kevin Hayes was raring to go after his successful run at the end of last season, and Ivan Provorov was finally given a real dance partner. If John Tortorella could push all the right buttons, we’d be in for an interesting start to the season and indeed that is what happened. There were a few holes in their game but it was to be expected. Carter Hart was playing out of his mind, Travis Konecny and Kevin Hayes were leading the way offensively, and Provorov looked like the 7th overall stallion the Flyers were over the moon for when they drafted him in 2015.

The bubble has somewhat burst because the flaws are coming out left, right, and centre, and if they can’t shore things up as soon as possible, their hot-start is only going to be just that – a hot start. The schedule makers never really give the Flyers an opportunistic start to the season and they’ve had to face the Tampa Bay Lightning, Nashville Predators, Carolina Hurricanes, New York Rangers, Toronto Maple Leafs, and the Florida Panthers twice. In those 7 games against some of the NHL’s best, the Flyers came out on top with a 3-2-2 record. They took care of business against the New Jersey Devils and Vancouver Canucks but slumped again against the San Jose Sharks – a team they have only beaten 4 times in their last 30 meetings.

Shots for versus shots against has been the biggest hindrance this season and that’s without a shadow of a doubt. The Flyers are constantly getting bombarded by shots against and shot attempts against. On the year they are currently second last in shots on goal with 263, ahead of only the Arizona Coyotes and their 231. In terms of shots against, they currently sit 9th in the NHL but thats factoring in that 7 of the 8 teams ahead of them have played 1-3 more games than the Flyers who have allowed 367 shots against.

It’s all fun and games when Carter Hart is able to stand on his head and deliver the victory out of the abyss but the last two games have really shown the dangers of their sustainability or lack thereof. The Rangers have had their fair share of success at the hands of the Flyers in recent years and players like Mika Zibanejad, Artemi Panarin, Chris Kreider, and Adam Fox always come out to play when Philadelphia is involved. The Flyers escaped Madison Square Garden with a point after Carter Hart made the first 35 saves before allowing a breakaway goal to Kreider in overtime with 53 seconds left. The Flyers fired 19 shots towards Igor Shesterkin, the Rangers hit the post 4 times, and the Flyers had no recorded shot on goal during the overtime period to let a masterclass performance in net go to waste.

The following night it was even worse against the Maple Leafs as they fell by a score of 5-2. The sky was falling in Toronto after their 4-4-2 start to year that included a 4 game losing streak out west before their tilt against the Flyers. This was exactly the game they needed to shut the media down for a little while. Sheldon Keefe was on the hot seat, all of a sudden Auston Matthews was no longer a Rocket Richard winner, Mitch Marner was the scapegoat for many issues, and their season was almost over and the calendar had just turned to November.

They outplayed, outmanned, outhustled the Flyers who have had the worst time defending the offensive zone cycles of their opponents. The Rangers ran circles around their defense, the Leafs were toying with them at times, and had it not been for Felix Sandstrom, the game would’ve been lights out by the end of the first period. However, in the strangest of ways, the Flyers have also been able to stay within a goal or two for most of their games, no matter how bad they’re being outplayed. They’ve been opportunistic in the offensive zone themselves but the goals are drying up real quick and with no real game-breakers in the lineup it’s only going to get tougher.

Konecny leads the team with 4 goals and 11 points in 12 games, Kevin Hayes is right behind him with 9 assists and 10 points and then Tony DeAngelo has 7 points to round out the top 3. DeAngelo hasn’t had the best of luck in the last few games – shades of Shayne Gostisbehere at the end of his tenure – but the rest of the team has been rather silent offensively.

Joel Farabee has had his moments, primarily the Nashville game where he recorded 3 of his 6 points, James van Riemsdyk was doing well before he broke his finger, and then the rest of the team is clumped together at 3 points. Morgan Frost hasn’t had the greatest of starts and even got scratched ahead of their game against the Leafs, Wade Allison got bumped to the fourth line and had his minutes reduced to 6-7 a game, Noah Cates has been silent outside of his game-winning goal against the Lightning, Travis Sanheim has been disappointing with his singular assist, and the list goes on.

Owen Tippett can be added to the good pile even with just 5 games on the docket. He has been a great surprise and early candidate for most improved. However, when your second line is another team’s third line, it’s tough to go out there and score, let alone shoot the puck. They have difficulties entering the zone, their shots are wayward and high, and it seems like now they’re pressed on finding the perfect shot instead of realizing who they are and what they have at their disposal talent wise. It’s not rocket science to simplify your game and whenever the Flyers do that, the puck ends up in the back of the net. Get traffic in front of the net and take shots, which is exactly what their opponents are doing.

The Florida Panthers fired 51 shots on goal in their most recent loss to the Flyers and had 104 shot attempts for the game. The Predators had 27 shots in the first two periods, the Hurricanes had 38 for the game, and the Lightning fired 38 shots in regulation, with Carter Hart having faced 262 shots in 7 games for an average of 37.42 a game. It doesn’t help that the defense is split into tiers at the moment with Provorov at the top and DeAngelo right behind him after a tough stretch of late. Sanheim has been disappointing to say the least, Rasmus Ristolainen is doing Rasmus Ristolainen things, which is good or bad depending on what you see and want to see. Then Nick Seeler, Egor Zamula, and Justin Braun are serviceable to a certain point.

Fortunately, the Flyers came out with a much better showing on Saturday night as they defeated Claude Giroux and the Ottawa Senators by a score of 2-1. Once again, it wasn’t a pretty win, it was barely a complete showing, however it was a much better showcase compared to what we saw earlier in the week. They are still giving up way too many grade-A opportunities, Hart is still coming up large when needed, and with Hart shutting things down for majority of the game that allows the Flyers offense to find their groove in time and make things interesting.

After Giroux opened the scoring in the first 3 minutes of the game, the Flyers endured a tough first period but picked things up as the game went along. Hart was the key as usual but simplifications on their power play and offense in general led to their 2 goals. Tony DeAngelo got the puck off the faceoff and it seemed like he wanted to pass it at first but decided to shoot it towards the net with a lot of bodies in front and fortunately Kevin Hayes was there to deflect his shot and that tied the game. Near the end of the second period, Zack MacEwen’s initial slap-shot was blocked but he scooped up his own rebound and surprised Cam Talbot with a rooftop shot that gave the Flyers the lead and eventually became the game-winning goal.

Their penalty kill was fantastic and didn’t allow the Senators to garner too many dangerous scoring chances, and the ones that did find their way through to net were easily handled by Hart. The power play seems to score once and then they fall back into a lull, which really needs to stop happening if they want to take advantage of the extra skater. It has been a better power play than last year’s rendition – which might not be saying much – but when you’re getting 4, 5, 6 chances a game, you have to capitalize more than once, especially when you are essentially outskilled 5-on-5.

With the offense not clicking as much as we need them to, the defense being a little more porous than necessary, and the special teams not being as special, it’s going to be tough to maintain hockey .500. However, the schedule becomes a little lighter moving forward and if the Flyers return to the basics, play with what they have instead of forcing what they don’t, and shore up defensively in front of Hart, they will be able to steal some games and squeak into the conversation.

Nevertheless, the Flyers ended their road trip going 1-1-1 against 3 good to very good teams as they enter a four-game week with games against the St. Louis Blues, Columbus Blue Jackets, Ottawa Senators, and Dallas Stars.

Felix Sandström deserves better
Looking Ahead to a Busy Four-Game Week; Ristolainen and Allison Called Out