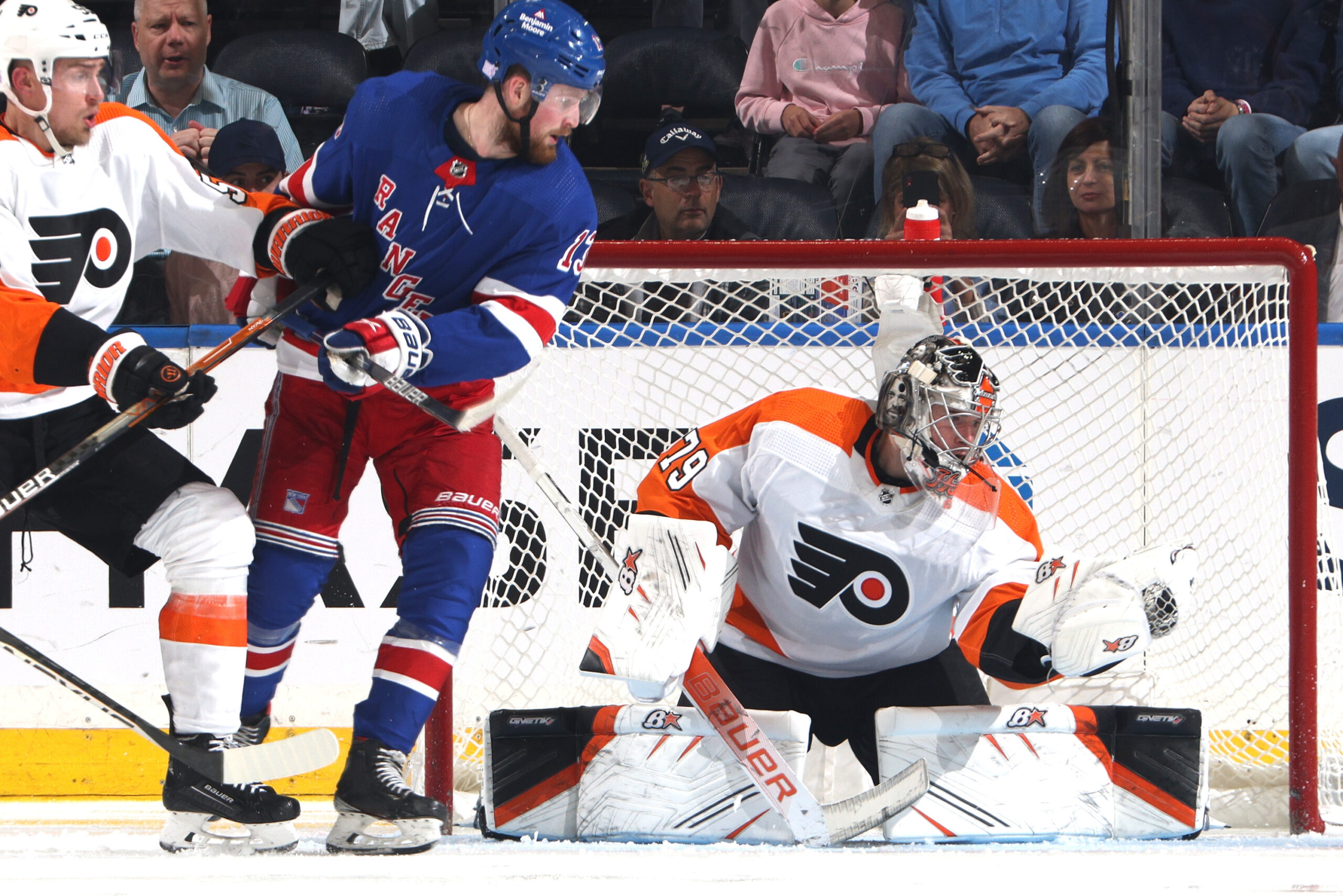 The New York Rangers defeated the Philadelphia Flyers 1-0 in overtime on Tuesday off the stick of Chris Kreider with only 53 seconds left.

It was almost deja vu from their last game when Brent Burns ended the overtime period with 54 seconds left, but this game was a lot different due to the sheer fact that the Rangers dominated the game through and through, especially from the second period onwards.

Carter Hart stopped 35 straight shots before the breakaway goal, the Flyers only managed 19 shots – none in overtime, and it was a gift from Hart that at least gave the Flyers one point out of this game.

The Flyers, who are suddenly one of the worst teams at faceoffs, lost an early draw that surrendered the first scoring chance of the game to Adam Fox. The offensive-minded Fox danced around a few Flyers before firing a shot that was robbed by Carter Hart only 70 seconds into the game.

Conversely, the Flyers’ first scoring chance came off the stick of Travis Konecny coming off the wing, as he fired his shot that was stopped by Igor Shesterkin but the rebound was a little looser than expected and as he tried the wrap around, the Rangers got back in time to block the passageway.

In a very untypical Rangers and Flyers game, it started off slow and rather boring with not much of anything going on, however things started going a bit more after Vincent Trocheck deflected an Alexis Lafreniere pass off the post near the midway point of the period. Only seconds later, Chris Kreider was called for a holding the stick minor for the first penalty of the game. A very aggressive penalty kill from the Rangers led to a scoring chance 14 seconds in as Trocheck came down the wing with a snap-shot that was shouldered aside by Carter Hart.

The best chance from the Flyers came off the stick of Lukas Sedlak with a few seconds left on the man advantage as his deflection from an Ivan Provorov pass was padded aside by Shesterkin.

For a solid 9-10 minutes the Flyers clogged up the neutral zone and didn’t allow much of anything for the Rangers, so much so that they had one shot on goal in that time span compared to the five they had in the early going.

As Rangers play-by-play commentator Sam Rosen mentioned a few times during the first period, the Rangers’ strong forechecking versus the Flyers’ neutral zone defense was going to be a battle to watch all game. The Rangers finally penetrated the Flyers lull and created several scoring chances in the waning minutes of the period, but Carter Hart was able to stand his ground and keep the game scoreless heading into the intermission.

The second period Flyers have been outshot a combined 107-66 but have outscored their opponents 10-4 and that’s how the period started in this one as well – at least in terms of shots and chances. The Rangers came out guns a blazing, created several chances right off the hop and it continued throughout. The Flyers were still doing a good job at clogging the neutral zone but the Rangers were slowly figuring out ways to get the puck in the deep and cycle, something the Flyers have had difficulties in defending.

After a pretty bad turnover from Justin Braun, Wade Allison was forced into a tripping minor after trying to get the puck away from Kaapo Kakko, who was in a prime scoring opportunity. The Flyers killed the penalty, mostly due to Carter Hart coming up with three big saves to keep the game scoreless.

Things only got tougher for the Flyers as the Rangers were taking over in every facet of the game. After the penalty kill, the Flyers’ top five players in Kevin Hayes, Travis Konecny, Joel Farabee, Ivan Provorov, and Tony DeAngelo were pinned on the ice and in their own zone for two full minutes and even after they finally got the puck out of the zone, a wayward Konecny shot went high and wide and then out of the zone right onto the stick of Kakko. He dropped the pass to Mika Zibanejad, streaking in off the bench, and he wired his shot off the post.

The shots were 11-3 for the Rangers in the middle frame with 5:57 left but unfortunately for them, Artemi Panarin was called for a rough minor.
Tony DeAngelo, who had trouble all game with the puck on his stick, fumbled it at the line and dove to keep it in but gave it to Adam Fox, who sent Chris Kreider all alone on a breakaway as he hit the third post of the game for the Blueshirts.

The Rangers dominated through and through with a 13-4 shot advantage and a 33-8 shot attempt advantage but as the period ended and the horn sounded, Joel Farabee and Ryan Lindgren got into a little pushing match until Travis Konecny came to the aid of his teammate, which then brought Adam Fox over and then all 10 players joined in for a lengthy scrum. Helmets came off, players were falling onto the ice, and referees were barely able to grab ahold of the players as the temperature of the game finally got a little hot.

To start the third period, Hayes, Sanheim, Lindgren, and Gauthier were in the box for roughing with Lindgren getting the extra roughing minor, giving the Flyers a power play. The Rangers killed it off with relative ease and then found themselves on the power play shortly after with Justin Braun heading to the box for a tripping minor. The Flyers were pinned in the zone for most the power play but not from a lack of opportunities to getting it out of the zone. They failed to clear it three times as the Rangers kept the puck in and then on the fourth chance, Noah Cates got it out of the zone with emphasis.

With the Rangers all over Carter Hart, Lafreniere came within inches again of scoring but the puck hit the post – for the fourth time this game for the Rangers.

3-on-2s, 2-on-1s, shots through traffic, shots in the slot, you name it, the Rangers had it, but Carter Hart seemed to have all the answers. With less than six minutes left in regulation, the third period shot totals were 5-5 but the Flyers barely held the puck and their shots all came from the outside with no traffic in front of Shesterkin.

The best chance of the game for the Flyers came right after the kill as Kevin Hayes came down the wing, made a move on the sliding defender, and ripped a shot that was gloved emphatically by Shesterkin. A minute later, Hayes came inches away again after making a nice move in-front but Shesterkin stretched out his arm as to keep the puck out of the net.

In the second time in as many games, the Flyers took their game into overtime but this time around they had no reason to be in the game still. The shots were 30-19 at the end of regulation as someone was coming out of this with a shutout.

Philadelphia’s first play of overtime was a long outlet pass from DeAngelo who missed Konecny for a dangerous icing call.

The Flyers’ overtime versus that of the Rangers was of missed shots to dangerous chances. Konecny, Hayes, Tippett, and Farabee all couldn’t find a way to get a shot on Shesterkin but it was the final shot from Konecny that went high and wide – again – leading to a 3-on-0 to a breakaway, as Zibanejad running out of gas nudged it ahead to Kreider who was all alone with Hart, and he made no mistake on his move to score the only goal of the game and seal the win for the Rangers.

The Flyers are right back at it in Toronto as they visit the struggling Maple Leafs on Wednesday at Scotiabank Arena.