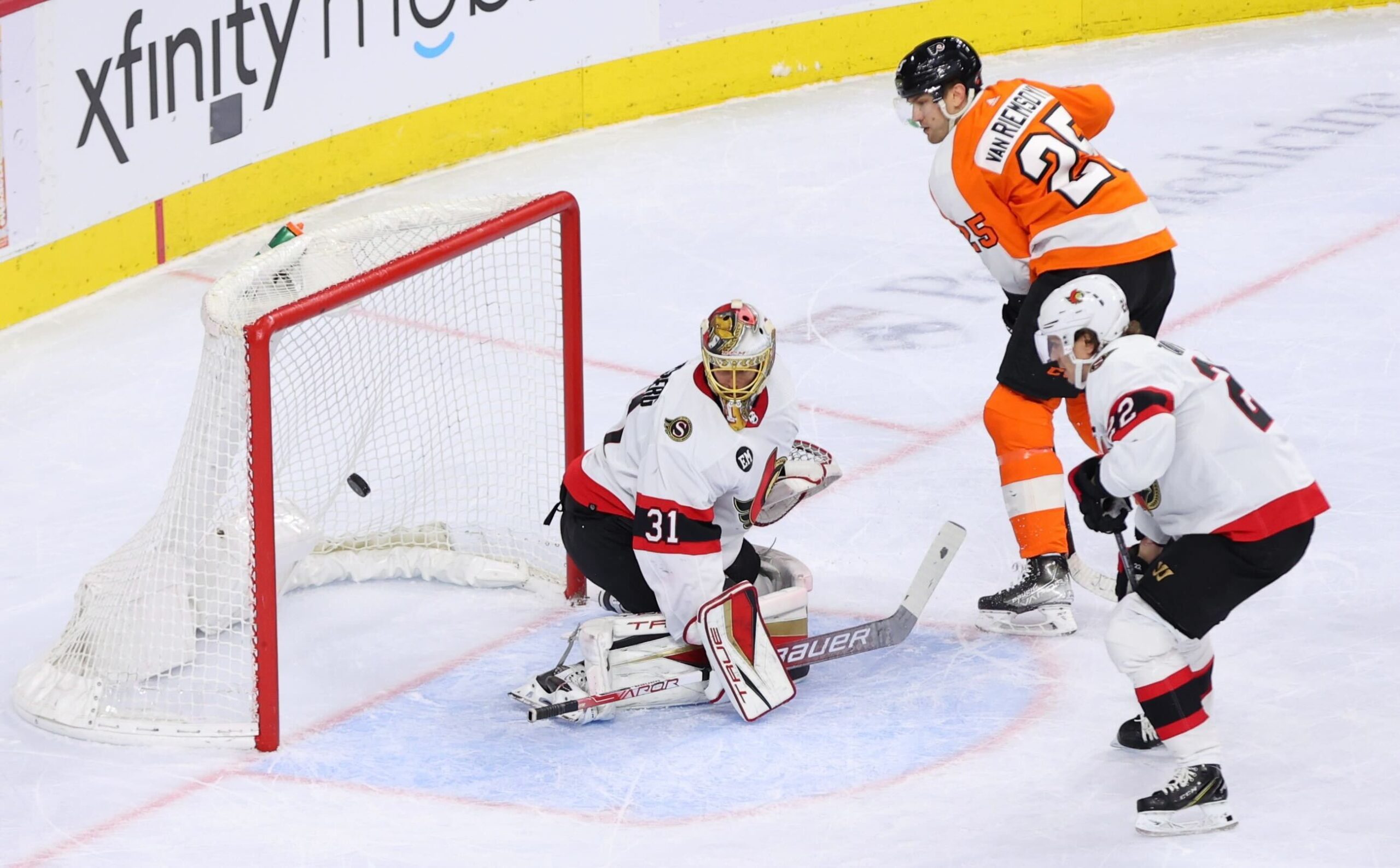 The Philadelphia Flyers fell flat in their regular season finale against the Ottawa Senators by a score of 4-2. The loss represented their third straight as they end the season on a sour note, but for those who wanted a loss for better lottery odds, the Flyers finished 29th in the 32-team standings as the New Jersey Devils were creeping in for that 4th and final spot. Had the Flyers pulled off the victory, they would’ve jumped ahead of the Devils and finished 28th instead.

The Flyers got goals from James van Riemsdyk and Owen Tippett, Ivan Provorov recorded two assists, and Martin Jones made 32 saves but Anton Forsberg’s identical 32-save performance as well as Brady Tkachuk’s usual chipper play was all Ottawa needed at the end.

The day we have all been waiting for has arrived: the final game of the dreaded 2021-22 season is about to take place between the Ottawa Senators and the Philadelphia Flyers. The Flyers finished off their road schedule with a shutout loss in Winnipeg on Wednesday night and with tonight being the final home game of the season, the Flyers Awards were being handed out pre-game.

Cam Atkinson and Travis Sanheim both took home two awards, while Zack MacEwen and Carter Hart joined the party as well. Atkinson won the Bobby Clarke Trophy as team MVP as well as the Yanick Dupre Class Guy Memorial Award. Sanheim took home the Barry Ashbee Trophy for the team’s best defenseman as well as his second Pelle Lindbergh Trophy for most improved player. MacEwen won the Gene Hart Memorial Trophy for most heart, and Carter Hart took home the Toyota Cup for most “Three Stars of the Game” points.

The Flyers were humming early and often as they took a quick 5-0 shot advantage with their best opportunity coming off the stick of Ronnie Attard but he hit the post after being set up from the goal-mouth by Travis Konecny. After a fast pace start to the game, the Flyers started to lose control as the Senators were coming in wave after wave. Travis Sanheim was then called for a holding minor 7:55 minutes into the game.

All hell broke loose with the penalty nearing it’s end after the Senators had three or four glorious scoring chances to break the dead-lock. Martin Jones made two saves on Tim Stutzle before having to dive for the puck in the blue paint with his stick. Linus Hogberg then made two saves of his own on the goal line. The referees might’ve missed it, but Hogberg looked to have handled the puck with his glove, which could’ve been called for a penalty shot. Stutzle and Brady Tkachuk were very upset and started to push and shove several orange jerseys, including Joel Farabee. No penalties were called and the Flyers eventually killed off the remaining 20 seconds of the Sanheim minor.

After a quick start, the shot totals evened out to 10-10 heading into the final commercial break of the first period. The Senators created the majority of the chances in the final four minutes with several goal-mouth opportunities, but Martin Jones was square to the shooter the whole way through. The Flyers hopped on the power play with 1:57 remaining after Mark Kastelic was called for a slashing penalty even though his stick snapped after a Kevin Hayes stick check.

The Flyers surprisingly only needed 28 seconds to score on the power play after James van Riemsdyk scored on a nice net-front move similar to Pierre-Luc Dubois’ goal from Wednesday night. Owen Tippett set him up as he was parked in his office unmarked as the goal represented his 24th of the season as he took sole possession for the team lead.

Only 78 seconds into the middle frame, Scott Laughton, who was streaking towards the Ottawa net, was pushed into Anton Forsberg but after video review it was concluded that they couldn’t find the puck and whether or not it crossed the line before the net came off its moorings. Just like their first period showing, the Flyers really came out strong in the first four to five minutes with a wave of chances, none of which were able to get past Forsberg.

4:12 into the period and Zack MacEwen was called for a goaltender interference minor, giving the Senators their second power play of the game. In a turn of events, the shorthanded Flyers created a scoring opportunity off a 2-on-1 rush. Kevin Hayes elected to hold onto the puck rather than sending a pass and as he made a move into the centre of the ice, Forsberg followed his shot the whole way through. The Senators had a few shots on goal but nothing all too damning as the Flyers killed off their second successive penalty.

Not long after the MacEwen minor, Egor Zamula was called for a roughing minor of his own 7:30 into the period for Ottawa’s third power play. The penalty was killed off again, but the Senators were getting closer and closer as the shot total for the second period reached 10-3 in favour of Ottawa only ten minutes in. The Senators ended up tying the game after Ivan Provorov couldn’t handle the puck in the defensive zone and ended up losing it behind the net to Brady Tkachuk. He then sent a quick net-front pass to Josh Norris for his 35th goal of the season with a shade under eight minutes remaining.

The second period ended with both teams tied at 1-1 but the Senators really brought it in the middle frame. Its been a common theme all season with the second period as the Flyers can never generate much of anything and tonight was no different as the Senators outshot the Orange and Black 13-6, were able to tie the game, and held a 24-17 advantage for the game.

Another early start had the Flyers close to retaking the lead as Owen Tippett found himself alone against Forsberg, but he lost control of his skates and crashed into the net. On the very next shift, the Senators took their first lead of the game 1:56 into the final frame after a seemingly easy point shot from Travis Hamonic got past the heavily screened Martin Jones. A few minutes later, Bobby Brink almost netted his first career NHL goal, but Forsberg was up to the task with a huge pad save.

With 11 minutes left in the third period, the Flyers had a similar opportunity as the Senators had on the first power play with a huge scrum in Forsberg’s crease. Hayes’ initial shot didn’t look all that threatening but it squeezed through his pad and the puck was rolling and loose. Travis Konecny and James van Riemsdyk jammed away but couldn’t find the back of the net. Keith Yandle scooped up the rebound for a chance of his own but was stopped by the pad.

With the Flyers coming close to tying the game, the Senators were found guilty of a holding minor courtesy of Erik Brannstrom, giving the power play another shot at scoring. With 54 seconds remaining on Brannstrom’s penalty, the Senators were called for another penalty, this time Auston Watson for a slashing minor. The Flyers called a timeout with a 54 second two-man advantage to work with, looking for their first two-man advantage power play goal of the season. Tippett, who has had chances upon chances over the last few weeks, finally broke through after he ripped a laser from the face-off dot. Morgan Frost won the face-off, and Ivan Provorov corralled the puck and set up Tippett for his second assist of the game and the Flyers’ second power play goal of the game as well; it was only the third time this season they have scored two or more power play goals in a game, and it was their first 5-on-3 goal all season.

The Senators found themselves on their fourth power play of the game with only 4:47 remaining in regulation as Linus Hogberg was reigned in for a hooking penalty. With the Senators controlling the puck for almost the entire power play and tired bodies in orange jerseys, Brady Tkachuk scored the go-ahead goal with a long-range wrist shot with only 3:22 remaining in regulation.

The Flyers pulled Martin Jones for an extra attacker with a shade over two minutes to go. Trying to ice the game quickly the Senators missed the empty net causing an icing. However, on the very next shift, the Senators were able to score the empty-net goal off the stick of Austin Watson from the neutral zone, ending the Flyers’ season with a 4-2 loss and a 29th-ranked finish in the NHL standings.

With the season coming to an end, I just wanted to extend a thank you from all of us at Flyers Nation for all those who have been a part of this hellish season. For all the likes, retweets, comments, mentions, and views on our social pages, articles, and website, we just want to thank everyone and hopefully we’ll have better things to write about from here on out.