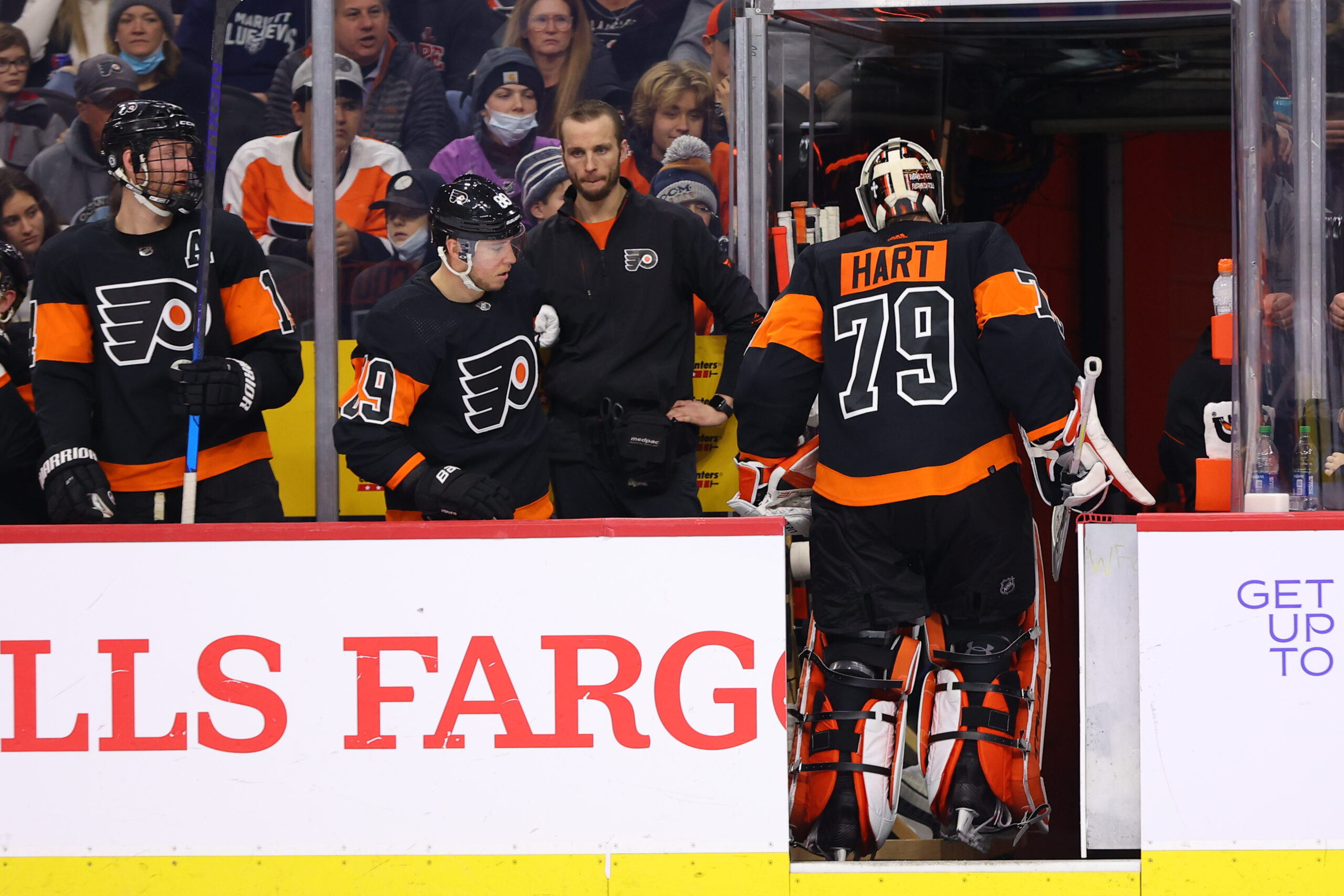 The Same Song and Dance

Here we are again, another year where locker room issues have become a talking point, this time by newly hired head coach John Tortorella. It’s been an ongoing saga since the early 2010s and it seems like every year the Flyers have attempted to purge the negativity off their team, only for the same issues to continue to pile up. Here we are, almost a decade and a half later, with the same issues plaguing the team but unfortunately for the fanbase and everyone involved with the Flyers – this isn’t breaking news.

Whenever the national media writes anything concerning the Flyers, they’re always very late to the party and sometimes they’re very off base. This time, it’s the former as we have witnessed time and time again, year after year, someone or group of people bringing up the issues within the walls of the Wells Fargo Center.

In the late 2000s, the Flyers had issues with players like Scottie Upshall and Joffrey Lupul who were part of the young core that was partying quite frequently. What did the Flyers do? They traded Upshall at the trade deadline in March of 2009 and then traded Lupul three months later at the 2009 NHL Entry Draft. Problem solved, right? Apparently not, because only a few years later the Flyers traded Mike Richards and Jeff Carter for a variety of reasons, the biggest one being their issues with then-head coach Peter Laviolette.

The moment the Flyers acquired Chris Pronger, Laviolette gravitated towards the future Hall-of-Famer to be the leader of the team even though Richards was the one donning the “C”. We also know everything there is to know about the “Dry Island” saga, and then of course the public spats that the players had with the Philadelphia media. All of that spelled their doom after another disappointing playoff run. Problem solved, right? Apparently not, because Ilya Bryzgalov became the new head-case and Pronger’s NHL career succumbed to an injury in quick succession following the trades.

Bryzgalov lasted two years into his massive nine-year contract and in his stead came Steve Mason. Mason has arguably been one of the best goaltenders the Flyers have had in a very long time but near the end of his tenure, he bumped heads with Ron Hextall, his teammates, and the coaching staff. He was unhappy with the termination of goalie coach, Jeff Reese, he would be a little too vocal when the team lost or made a mistake, and everything was coming to a grinding halt.

With the team, player, and front office understanding that they were going to part ways, you would think the negative air was finally gone, right? Apparently not, because the problem persisted the entire time that Hextall and Dave Hakstol were running the ship. Under Paul Holmgren, constant moves and changes were happening on a yearly basis, whereas the team generally remained the same under Hextall with the exception of his depth pieces. So then the core started getting the blame once again, but this time the core was represented by captain Claude Giroux, Jakub Voracek, Wayne Simmonds, and Brayden Schenn.

The core quickly split after Brayden Schenn was moved in the summer of 2017, Wayne Simmonds was dealt at the trade deadline in 2019, Jakub Voracek was moved in the summer of 2021, and Claude Giroux was moved at the trade deadline in 2022. Not to say that they were to blame for the mishaps in Philadelphia, but they represented the core of the team that could never seem to stabilize or progress any further than a first round exit.

Simmonds was a shell of his former self by the time the Flyers traded him to Nashville. He was dealing with a laundry list of injuries and his offensive output dropped dramatically right before he was in line for a new contract. Voracek was on the business end of a purge in the summer of 2021 when Chuck Fletcher decided to back his coaching staff versus the players that had issues with said coaches.

In came Ryan Ellis, Cam Atkinson, Keith Yandle, Nate Thompson, and Rasmus Ristolainen, and out came Jakub Voracek, Shayne Gostisbehere, Phil Myers, and Nolan Patrick. Voracek was quite vocal about his disdain with Alain Vigneault and the role he was being given, Gostisbehere was very upset with how he was being handled and treated, Myers found himself in the press box more often than on the ice, and Patrick wanted a change of scenery and away from Vigneault and company.

So the Flyers obliged, stuck by their head coach and assistants, and brought in a myriad of players with leadership qualities and accountability on mind. This time it was bound to work, right? Once again, the answer was a resounding no because Vigneault and Michel Therrien were relieved of their coaching duties in December, the Flyers spiraled out of control, dealt with their fair share of injuries, and slumped to the tune of a 25-46-11 record.

So what was done this summer? Well, they a head coach who has a history of shaping up his team in quick order in John Tortorella, they rearranged their front office and even created new positions, and they essentially kept the same team from last with the hope that the return of Sean Couturier and Kevin Hayes will be enough to propel them back into contention but also adding depth pieces like Nicolas Deslauriers and Justin Braun to stabilize the team if things spiral again. Essentially making moves on a wing and a prayer.

With the season only a month away from commencing, John Tortorella appeared on SiriusXM NHL Network Radio to talk about the upcoming season, Carter Hart, and the locker room culture. When asked about the next captain, Tortorella said:

“I am in no rush to name a captain…as far as the room, I have major concerns about the room.”

“I have major concerns about what goes on in there. Before we even step on the ice, situations and standards and accountability in the room is forefront. You can’t get squat done on the ice until you get your room straightened out and I think we have a little bit of work to do there.”

So it seems as if the problems might still be lurking around even after the trade of Claude Giroux, who many believed was at the core of these issues. Wherever you stand on the former captain, maybe he wasn’t entirely the issue if things still persist even in his absence? Or maybe things were so bad that even after his absence, the negativity still looms over the team like a dark cloud? Whatever the case may be, it seems like Tortorella is going to make this a top priority, which will do wonders for the Flyers if he actually is able to solve the decade old problem.

As for what the problem is and who could be behind it remains to be seen. Sean Couturier is currently the longest tenured Flyer after trading away Claude Giroux. He has been on the team since his rookie season in 2011-12. Scott Laughton is on his heels after he made his debut in the lockout-shortened 2012-13 season, Ivan Provorov and Travis Konecny are then the joint longest tenured dating back to their rookie seasons in 2016-17, followed by Travis Sanheim in 2017-18, and Carter Hart and James van Riemsdyk in 2018-19. Everyone else was either brought in or drafted after 2019.

Is it even a personnel problem? Could it be the coaching staffs and/or front office executives? The stories that came out after Hextall’s dismissal showed that he ruled with an iron thumb, kept an eye on everything the players did from diet to exercise, and even had coaches “spy” on their own players. It was a toxic environment by the end, but things didn’t really get any better under Alain Vigneault and company. The three-headed monster of veteran leadership really only had 2-3 good months of hockey under their belt. A lot of players butted heads and once they were dismissed, a few standouts looked and played a lot better in their absence.

Bobby Clarke and Paul Holmgren have been around the Flyers for over 40 years apiece and both are currently high executives with the team at the moment. Some say they don’t have a lot of sway in decision making, however some refute that with the idea that they are pulling the strings behind the scenes. It’s not necessarily one person’s fault or one group’s fault but when everything is combined into one, you can see the glaring issues that need to be dealt with.

The players have been warned about a short leash, so here’s to hoping for a reinvigorated Flyers team once the puck drops on the 13th of October.