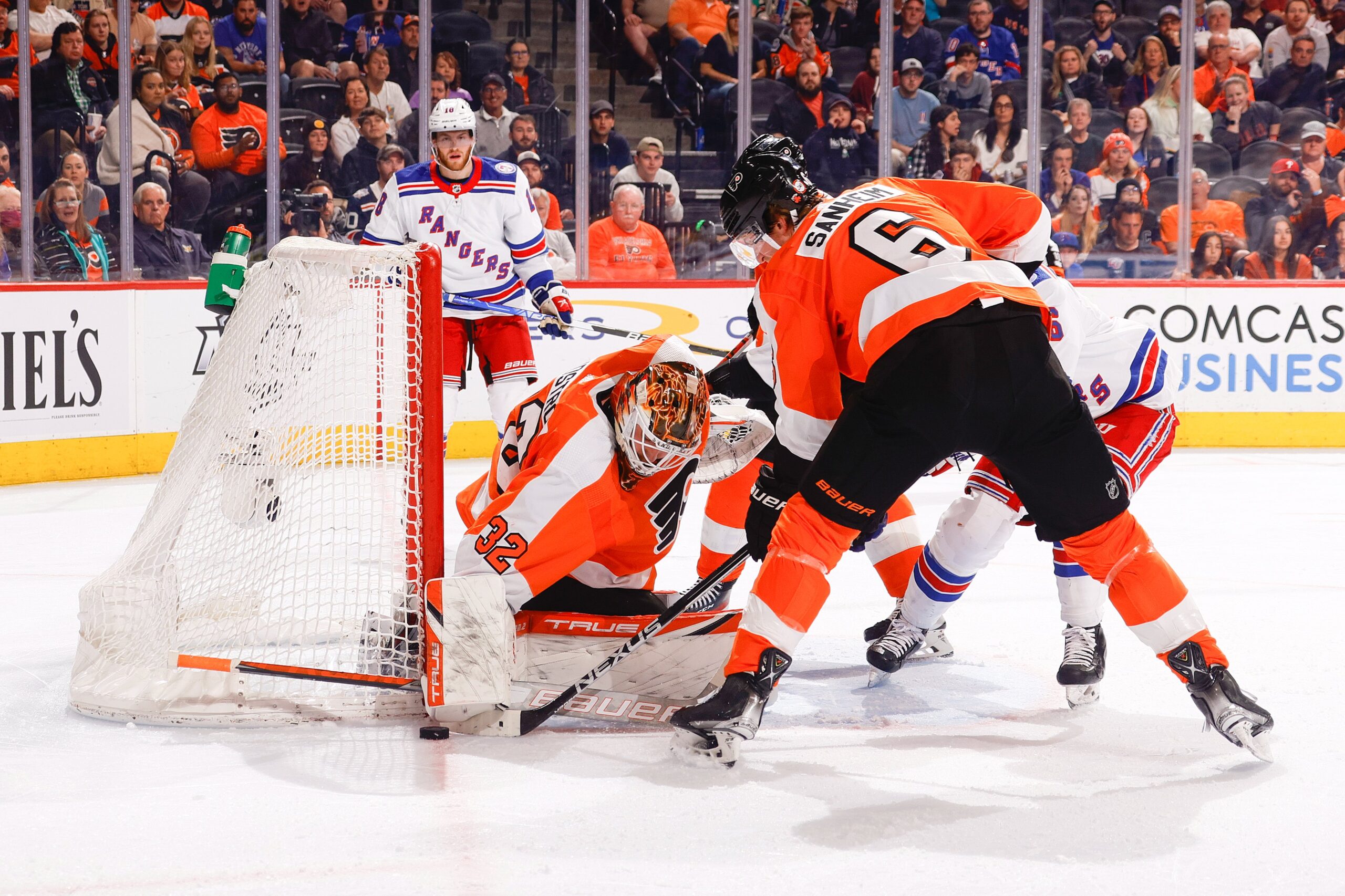 The Philadelphia Flyers came into their matchup tonight against the New York Rangers incredibly undermanned. They were missing Carter Hart, Cam Atkinson, Cam York, Rasmus Ristolainen, Nate Thompson, and Patrick Brown, most of whom are key contributors on a regular basis, and while their absences were not solely to blame, they probably could have helped out as the lowly Flyers fell 4-0 to the rival Rangers.

The Flyers began with as great a start as you could draw up against a strong team like the Rangers. They fired the game’s first five shots on goal and held New York shotless for the first 4:30 of the game. Philadelphia displayed excellent aggression and pressured the Rangers early and often, but Alexander Georgiev was up to the task for New York.

The Rangers would eventually restore order and begin to push back, and they’d wind up netting the first goal of the contest. Kaapo Kakko was the recipient of the goal after K’Andre Miller and Barclay Goodrow forced a turnover along the board in the Flyers’ end, and Goodrow dropped the puck off to Kakko. The Finn skated in and beat Felix Sandström low to the glove side to make it 1-0 with 9:40 to play in the opening period.

Shortly afterwards, the Rangers had a golden opportunity to break the game wide open. Noah Cates was sent off at 11:51 for holding, and then Kevin Hayes joined him in the box just five seconds later for slashing, setting up an almost-full two minutes of 5-on-3 time for New York.

During the penalty kill, a scrum ensued after Sandström covered the puck after a save, and the Rangers lost Chris Kreider for slashing while Philadelphia lost Scott Laughton for roughing in the post-whistle scrum. That was huge for the Flyers to get the Rangers’ first 50-goal scorer in 16 years off the ice during their two-man advantage.

Through plenty of toughness and timely saves by Sandström, the Flyers managed to kill off the long shorthanded period and escaped unscathed on the scoreboard. The Flyers would hold off the Rangers throughout the rest of the period and 1-0 New York is how the first twenty minutes would wrap up. After a slow start, the Rangers led in shots 13-10, held a one-goal lead, and dominated the latter half of the period.

The Flyers didn’t come out in the second period as fiery as they had in the first, but the Rangers gave them an opportunity to claw back into the game with a power play just 20 seconds in. K’Andre Miller was called for holding against Kevin Hayes to set up Philadelphia’s first man-advantage of the game, but of course, the Flyers could only muster two shots from Travis Sanheim and Bobby Brink and could not solve Alexander Georgiev before the power play ended.

The two clubs traded shots and the physical play ramped up as the game wore on, and after a mildly uneventful series of play, the Rangers suddenly struck again. Filip Chytil stick-lifted Oskar Lindblom and stole the puck away from a tied up Ivan Provorov along the corner boards, and he sent a beautiful pass to the goal-mouth and just by Tanner Laczynski’s defending stick as Kaapo Kakko fired home his second goal of the game. It was the sixth multi-goal game in Kakko’s young NHL career.

The Rangers smelled blood with their two-goal lead, knowing they could basically do as they pleased to the Flyers with only Sandström really rising to the occasion for Philadelphia. They kept their foot on the gas and just 2:41 after Kakko’s second goal, Artemi Panarin was left all alone next to Sandström’s crease for an easy one-time rocket off of a good point-feed from Jacob Trouba. Panarin’s 22nd tally of the season gave the visitors from Broadway a commanding 3-0 lead.

Things got chippy again with just under five minutes left in the period, as Hayes and Barclay Goodrow were given coincidental roughing minors after another scrum. New York and their style of play were clearly frustrating the Flyers and it was beginning to really seep in at that point. It was only highlighted again by an egregious delay of game penalty by rookie defender Egor Zamula with just over two minutes to play in the middle frame. Luckily, the Flyers killed it off and exited for the second intermission down three.

Philadelphia tried what they could to battle back against a very good Rangers club that’s bound for the Stanley Cup Playoffs. But in saying that, the New York defense was suffocating towards their attack, not letting many shots get towards Georgiev, who was yearning for his second shutout of the season.

#40 in white, blue, and red only faced six shots the entire third period, a far cry from the 10 and 12 he saw in the first two stanzas. He wasn’t very busy but he made some big saves when he had to, including an impressive Travis Konecny backhanded shot that was met by an even more impressive blocker save earlier in the game.

The Flyers were all but destined for a loss, but they had to play with one last power play as reigning Norris Trophy winner Adam Fox was sent to the sin bin for slashing Flyers rookie Bobby Brink at 17:41. Unfortunately, even with an extra attacker on the ice for Sandström, they couldn’t generate much of anything offensively. Andrew Copp was able to take the puck and dunk home the empty-net cherry  on top for the Rangers with 1:53 to play and make it 4-0 in favor of New York. Travis Konecny and Barclay Goodrow were each handed ten-minute misconducts after the goal after jawing back and forth too much for the referees’ liking.

That would be all she wrote as the New York Rangers sunk the Philadelphia Flyers at Wells Fargo Center by a score of 4-0, handing the Flyers their third straight loss before they get prepared for another back-to-back slate this weekend.

The Flyers will head to Western New York on Saturday night when they take on the Buffalo Sabres at KeyBank Center on the first leg of a back-to-back, home-and-home slate with the Sabres.

Flyers hoping for amnesia ahead of Rangers matchup
Can the Flyers Jump Back into the Hierarchy of Philadelphia Sports?