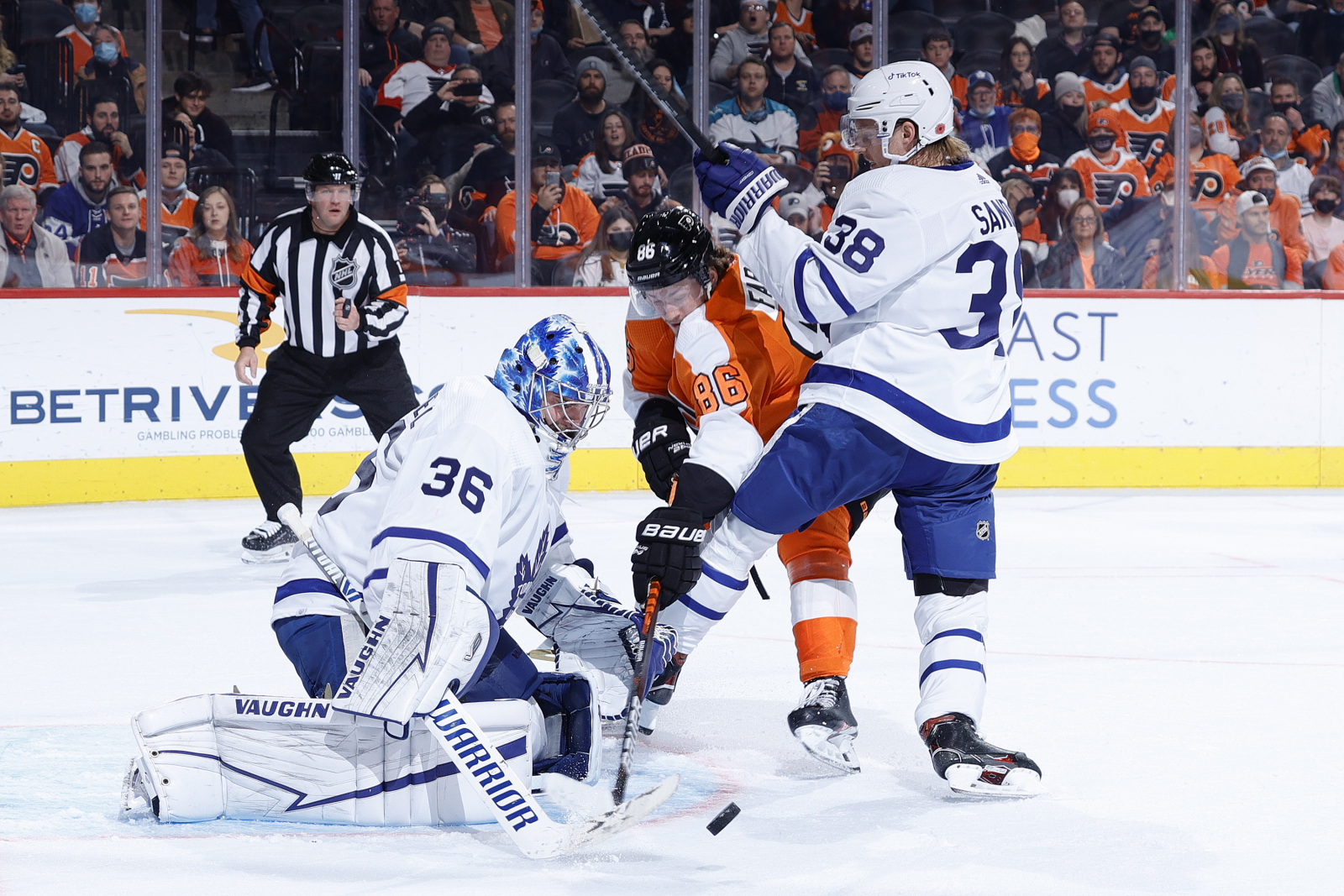 Carter Hart was the best player in Orange and Black. He made 30 saves on 33 shots. He kept his team in the game, but it is hard to win games when the team does not score. Hart denied William Nylander’s hat trick on a breakaway late in the third period.

The Flyers did not look sharp and did not have their skating legs after being off since Saturday. This is not to take anyway anything from Toronto, who is a very good team. Neither team had their best offensive games given the amount of offensive talent on each team, even with John Tavares and Kevin Hayes being absent.

William Nylander was the best player on the ice for either team. His first goal was a fluky and controversial deflection/kick but that was a reward for going to the net. His second goal was a beautiful snipe from the slot during a power play. Some people will say Hart should’ve had it because he was not screened, and it went short side but it was a rocket of a shot from short range.

Toronto goalie Jack Campbell was not tested much in the first two periods but came up with some huge saves in the third. Toronto played a very sound game defensively and dominated on the penalty kill. The Maple Leafs killed off all four Flyers power plays.

The Flyers need to get their offensive game going and get to the high scoring chance areas. The Flyers have 9 goals in their last 6 games, and there seems to be lack of chemistry offensively. While Hayes and Ryan Ellis are expected back soon, the Flyers cannot waste time because the Metropolitan Division is the best division in hockey by far.

Toronto made a point of going after Claude Giroux and the Flyers answered the bell by not backing down and going back after the Leafs. Specifically, Travis Konecny jawing at Michael Bunting letting him know that those actions will not be tolerated. Justin Braun had another strong showing with 6 blocked shots. He was extremely active in the offensive zone pinching below the goal line. He’s easily one of Chuck Fletcher’s most underrated acquisitions. Braun did get out-skated to the puck on what eventually became the Leafs’ 3rd goal. (Note: I did not love this).

It is not enjoyable seeing Wayne Simmonds in an opposing team’s Jersey. He was an absolute treasure of a player and embodied the city of Philadelphia. He worked hard, played harder and was a great leader.

Those were some bad power plays in the first period, and Carter Hart was the de facto quarterback of those power plays. The Flyers couldn’t control the puck after the initial faceoff. The slingshot pass does not work well when none of the Flyers are elite skaters or are not skating with speed through the neutral zone.

I didn’t love the call on the Nylander goal. There was not indisputable evidence that it was or wasn’t kicked in. The call on the ice should’ve stood.

A dirty play was made by Ondrej Kase on Scott Laughton in the 3rd period. First a side-slew foot, and then he hit him in the head. Laughton was shaken up on the play and a penalty was assessed to Kase for tripping. Kase scored the third Maple Leafs goal right after the Flyers killed off a penalty.

The Laughton-Lindblom-van Riemsdyk line did not have a great night. They seemed to be chasing the game a little.

I am going to declare Scott Laughton the winner of the Dripsmas event. I love the turtleneck and blazer look and I love the dichotomy of Laughton looking like an axe murderer on the ice and a noble gentleman off the ice. Slight Ted Bundy vibes.

Sean Couturier was the runner up with his yellow ensemble. Not ranked was Travis Sanheim in his blue sweatsuit. He looked like the Beastie Boys circa 1992. The biggest positive of this Instagram event is showing of the personality of the players after basically locking them in a room for the past 18 months.

Thank you to all the veterans for their service and sacrifices.