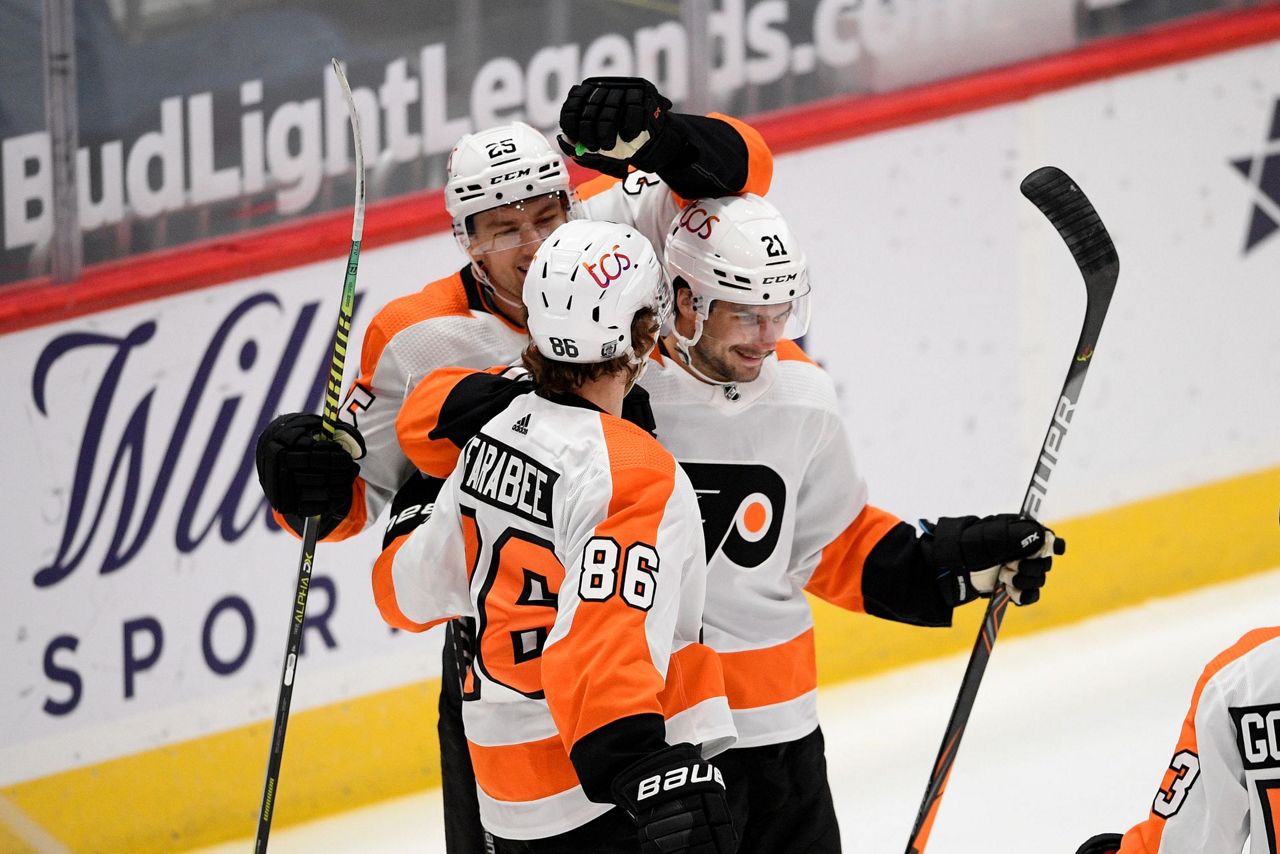 The Philadelphia Flyers looked like their week was going to be one to forget about 17 game minutes into their game against the Washington Capitals Sunday when they went down 2-0.

The deficit came after two losses to the Boston Bruins earlier in the week, but the Flyers fought back from multiple deficits to beat the Caps 7-4 and salvage three points out of six for the week. Some of the positives from those games include the play of James van Riemsdyk, but undisciplined play and penalties headlined the negatives.

Before the season, I wrote about how JvR was likely to be left exposed in the Seattle Kraken Expansion Draft. Through the first 13 games, the winger is proving why he’s a necessity on the Flyers.

Van Riemsdyk leads the team with 18 points (good for fourth across the whole NHL) and seven goals. After a 2019-20 season that saw the 31-year-old snakebitten, it’s nice to see JvR finally start to bury goals again.

And he’s been potting goals in different fashion also. His deflection/tip work is still top-notch, but he’s also scored some snipe-worthy goals, which isn’t always the case, despite van Riemsdyk’s goal-scoring history.

But the American also just looks faster and stronger than ever since returning to Philly. He’s also looked better in his own zone and his usually strong advanced stats are staying that way with a 51.82 Expected Goals For percentage according to Natural Stat Trick, which is third on the Flyers among players with more than six games played.

If van Riemsdyk continues to play this way, he’ll force the Flyers into a hard decision this summer, which is good for every party involved.

The injury bug has not been great to the Flyers this season, but they actually had some (not full) luck with injuries this week — especially compared to how things looked at some points.

First, Philippe Myers returned for the game on Wednesday. He then missed Friday’s game but was back for Sunday’s game.

Oskar Lindblom took a hard hit from the Bruins’ Connor Clifton on Friday and missed the rest of the third period. However, he practiced Saturday and returned Sunday.

Thursday’s practice, though, resulted in a Carter Hart injury that kept him out of Friday’s game where he was slated to back up Brian Elliott. But like Myers, the netminder was able to return Sunday. Sean Couturier also made his long-awaited return against the Capitals.

However, the injury report wasn’t empty by the Caps game. Defenseman Travis Sanheim was pulled last minute from the contest and added to the COVID Protocol List, though a reason was not stated. Still, looking at that fluid injury chart, it’s nice to start a new week with no new major injuries.

What a difference Couturier makes for the Flyers even when he plays just one period in a game with regular ice time.

Couturier returned Sunday against the Capitals, but was worked in slowly playing less than five minutes each in the first two periods. The 28-year-old centered the fourth line and didn’t play in his usual spot on the power play.

But to start the third period, coach Alain Vigneault started a makeshift line of Couturier, Michael Raffl, and Jakub Voracek. The trio responded with Couturier’s first goal of the season, and what would end up being the game-winner.

Couturier played just over six minutes in the third, helping to stabilize the team’s neutral and defensive play, and iced the game with a defensive zone empty-net goal.

Sticking Up for Teammates

I don’t believe that a fighter/enforcer role on an NHL team is really a necessity anymore in the league’s current state. I don’t believe having a fighter will deter an opponent from making a borderline/completely illegal hit. Those hits have existed for much longer than the past seven or eight seasons (when the fighter role has heavily diminished) and frankly, hockey is a fast sport — mistakes and accidents happen.

But I do believe there are some positives to sticking up for your teammate when a bad hit happens. Unfortunately, that hasn’t happened at all this season for the Flyers.

On Friday, the latest borderline hit was delivered on a Philadelphia player when the Bruins’ Connor Clifton hit Oskar Lindblom (who took a crosscheck to the neck last week against the New York Islanders) high and late.

Just like any of the hits before this one, there was no response from the Flyers.

The benefits to fighting after a hit like that (to me at least) is the opportunity to build some team unity and prove you’re a tough team to play against. The last thing a hockey team wants to be is easy to play against.

Philly doesn’t have Wayne Simmonds anymore or a player like him that does drop the gloves frequently but Nic Aube-Kubel did get in a fight with Clifton earlier in the game and Scott Laughton has shown a willingness to fight in the past.

It’s going to be a long season for fans and the Flyers themselves if the team continues to forget about the dangerous hits that are dealt to their teammates.

The Flyers started out the year struggling on the penalty kill, then found a groove, but the past week things went down the tube for Philly shorthanded. What exacerbated the issue though was the nature of the penalties.

We’ve seen plenty of stick infraction calls where players hit an opponent on the hands with their stick but a lazy too many men on the ice penalty cost the team on Sunday. About midway through the first stanza, the Flyers had six skaters in the middle of the ice. It wasn’t a case of an early change or bad puck luck. Philly simply had too many players on the ice.

It was unclear who misread their assignment but it did result in the Capitals’ first goal of the game after the Flyers had started the game on a high note.

But the worst of the week was Scott Laughton’s interference penalty with seven seconds left in a 3-3 tie in Wednesday’s game against the Bruins. Yes, the call before it on Kevin Hayes was bad, but there was no reason for Laughton to attempt to ride any of the Bruins along the boards with such little time left in a tied game.

Boston carried all of the momentum and the team continued to feed on the man advantage, scoring its third power-play goal of the game. That sent the Flyers off the ice with one point in a game where they had led by two goals at one point in the third period.

I guess this section might only apply to Bruins games, since the Flyers were able to close out their game against the Capitals in an emphatic way Sunday. Maybe they learned quickly after the two Boston games Wednesday and Friday.

As mentioned above, the Flyers had a two-goal lead against Boston Wednesday but then squandered it by taking penalties and letting David Pastrnak reap the benefits. On Friday, it was a similar playbook, though not the same.

Van Riemsdyk broke a scoreless game with a deflection power play goal early in the third Friday. With such little action throughout the game, it did seem possible that tally could be the game-winner. A less-than-30 second window at the eight-minute mark changed all that.

First, Brad Marchand scored to tie the game, then on the next shift, Sean Kuraly shot what should have been a harmless wrister on a fast break. Goalie Brian Elliott lost it though and the goal ended up being the game-winner.

The Flyers had begun to sit back a bit before the two goals and that usually leads to a letdown. Rather than doing that Sunday, Philly scored two goals and kept the pressure on throughout the third period against the Capitals. Hopefully, that becomes more of the norm.