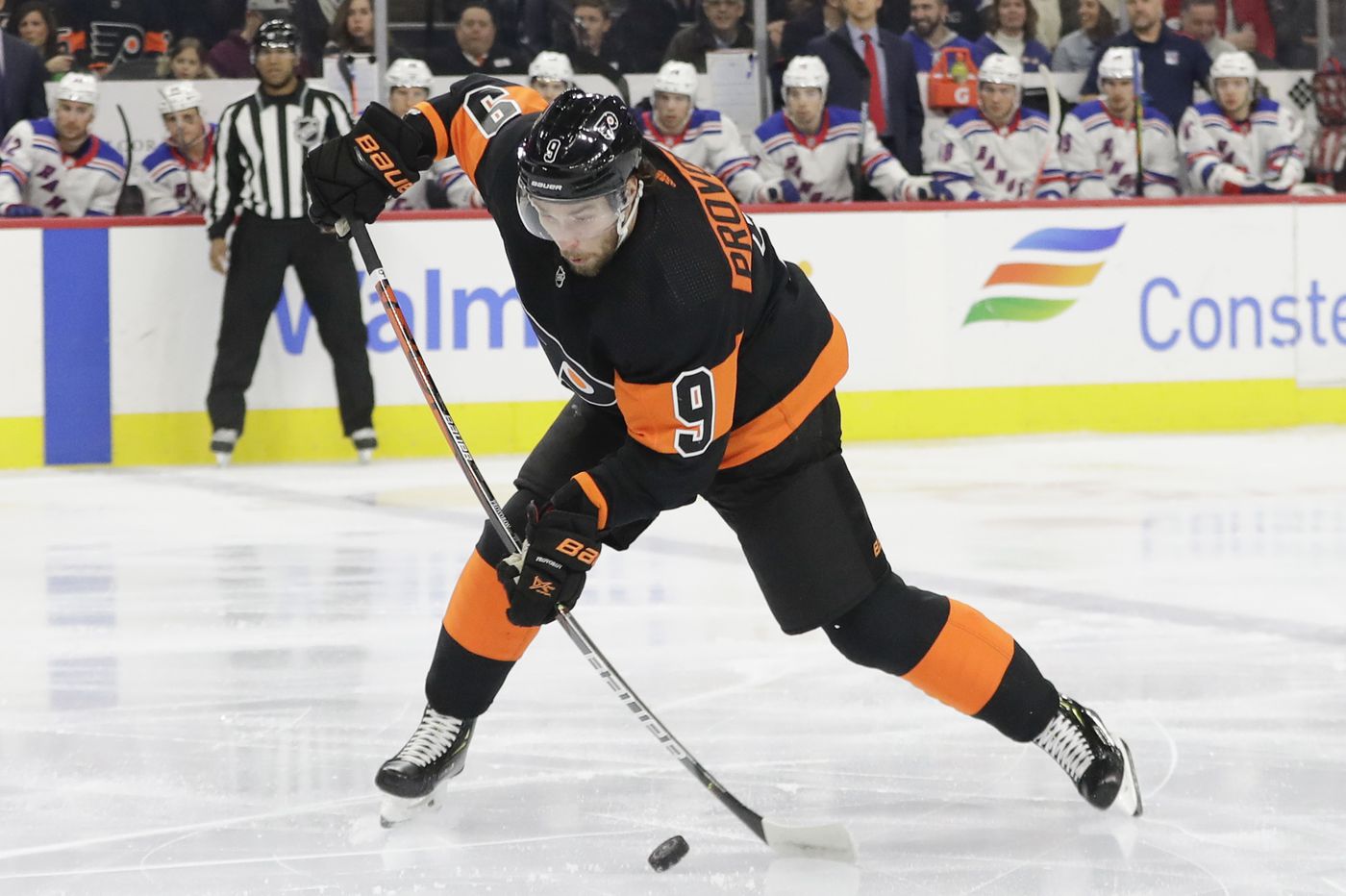 The Philadelphia Flyers played four games in the past week. They walked out with four wins, eight points, and a tie for first in their division.

You would think that would make the “down” portion of this column difficult, but that’s hardly the case. There’s plenty to be frustrated about despite the Flyers recent success including the play of a newcomer, 60-minute effort levels, and a scorer.

First off, I should just mention how well Ivan Provorov has played this season. He hasn’t put up any elite offensive numbers, but his defensive work has been great and maybe the only Philadelphia blueliner that hasn’t struggled consistently in moving the puck.

But what’s even better than Provorov’s play has been finding a decent partner for him with Shayne Gostisbehere.

Replacing Matt Niskanen in the first six games of the season was difficult for the Flyers — and they haven’t replaced him completely by any means — but finding a defenseman that can log those minutes and not actively hurt the team’s best defenseman is a positive. Sure, Ghost has made some mistakes but he’s also made top-end plays like his defense that led to the game-winning goal Saturday night against the New York Islanders.

With most of the team in shambles, it’s nice to see what was a question before the season, and a few games into it, has been answered in a satisfactory way.

But the 34 year old was able to update his credentials Thursday night against the New Jersey Devils when he surprisingly entered the Flyers’ lineup.

Prosser, who played all of last season with the Phantoms, has largely been a part of Chuck Fletcher’s organizations since he was signed as an undrafted free agent by the Minnesota Wild in 2010. Last season, he never had an opportunity to play for the Flyers but due to an underachieving defense corps this season, coach Alain Vigneault decided to call the veteran’s number.

While there was some dissension among the fan base with the lineup swap (more on that later), I think we can all be happy that a guy who probably never thought he would see NHL ice again, got another opportunity.

And he backed that up with a steady, unassuming night. First, Prosser scored the Flyers’ first goal which tied the game at one and gave the team some life. But his work in his defensive end, especially on the penalty kill, was much needed.

It’s unlikely that Prosser can keep up that level of play over a full season — and Vigneault seemed to agree by re-inserting Erik Gustafsson the next night — but it was special to see Prosser excel after a long break from the NHL even if it was just for a night.

It was a busy week in the player’s suite as players filtered in and out throughout the Flyers’ matchups. Prosser entered into the lineup, but so did Sam Morin in turn for the biggest scratch of the week in Travis Konecny.

The move unsurprisingly caused an uproar among Flyers fans on Twitter as Vigneault sat the team’s leading scorer at the time in the first game against the Islanders Saturday night. The coach explained after the game that the benching was meant to send a message to the team.

On one hand, there’s no doubt that the Flyers are a better team when Konecny is on the ice, but the team needed something to act as a kick in the pants. It’s clear management is not planning on making a trade to send a message or shake things up so Vigneault had to pull something out of his sleeve.

With that in mind, Philly has simply not been good this year. Vigneault is trying to take the steps to fix that like putting in a veteran Prosser for a game over a rookie with some promise in Mark Friedman, and sitting a guy like Konecny for a game. Luckily for the Flyers, they also earned wins in the games that had the controversial scratches.

One can argue the Flyers played nearly a complete game Sunday night against the Islanders (except for about the first seven minutes — and more importantly the Isles’ tying goal at 3) but we’re looking back at the past week and only 25 percent of the games featured a full 60-minute effort from Philly.

Of course, it all resulted in a win in each and every game so maybe the point is moot. However, it’s unlikely the Flyers will keep up that pace if they continue to take periods off.

Against the Devils on Tuesday, the team had a decent second period but only a so-so third and a slow start in the first. In the second game on Thursday, the Flyers’ second period was abysmal — and their first wasn’t much better. Philly generated eight shots combined in the first two stanzas before finally generating some offense in the third.

On Saturday against the Islanders, the Flyers teased the fans by coming out firing and scoring two goals in the first 14 minutes. They then followed that up with eight shots in the next two periods.

Maybe Sunday’s effort is more of what we’ll start seeing. Flyers fans should hope so because the rate of success is unsustainable without it.

Konecny entered the week as the Flyers’ leading scorer with eight points. He finishes the week with two total shots and a healthy scratch under his belt. I don’t believe the healthy scratch will become a normal thing at all with Vigneault but let’s hope the shot totals don’t become standard.

To be fair, the whole team struggled to generate opportunities but Konecny is supposed to be one of the main offensive drivers. If he isn’t contributing, his line is likely not going to be producing much offense.

But he also had some defensive deficiencies that led to his benching. When a player like Konecny isn’t scoring and is a liability on the defensive side of the puck, he’ll draw the ire of a coach like Vigneault.

The 23 year old followed up his benching with a largely invisible Sunday game against the Islanders. He didn’t make any mistakes on defense but the offense has to get going again soon.

When Gustafsson signed in Philadelphia over the offseason, his fit was questioned by the fan base — and for good reason. The Flyers needed a replacement for Matt Niskanen and while Gustafsson’s offensive instinct was more than adequate, his defensive impact was hard to imagine matching Niskanen’s.

It seemed like Vigneault agreed, never even testing the Swedish d-man with Provorov during training camp. But even so, Gustaffson has struggled mightily in Philly.

He’s good for a costly turnover most games and his gap work on incoming forwards needs a lot of improvement. To be fair, Gustafsson didn’t get a preseason to acclimate to his new team and does know he’s not playing at an adequate level:

The 28 year old sat out two of the four games this past week and although he contributed two assists in the Thursday game against the Devils, he also had poor gap control on New Jersey’s first goal. There is a clear “take the bad with the good” component to Gustafsson’s game.

He sat out Sunday’s game against the Islanders and apparently that doesn’t seem like it will be an uncommon trait this season. That’s unfortunate for a player most were hoping would carve out a regular role on the blueline.