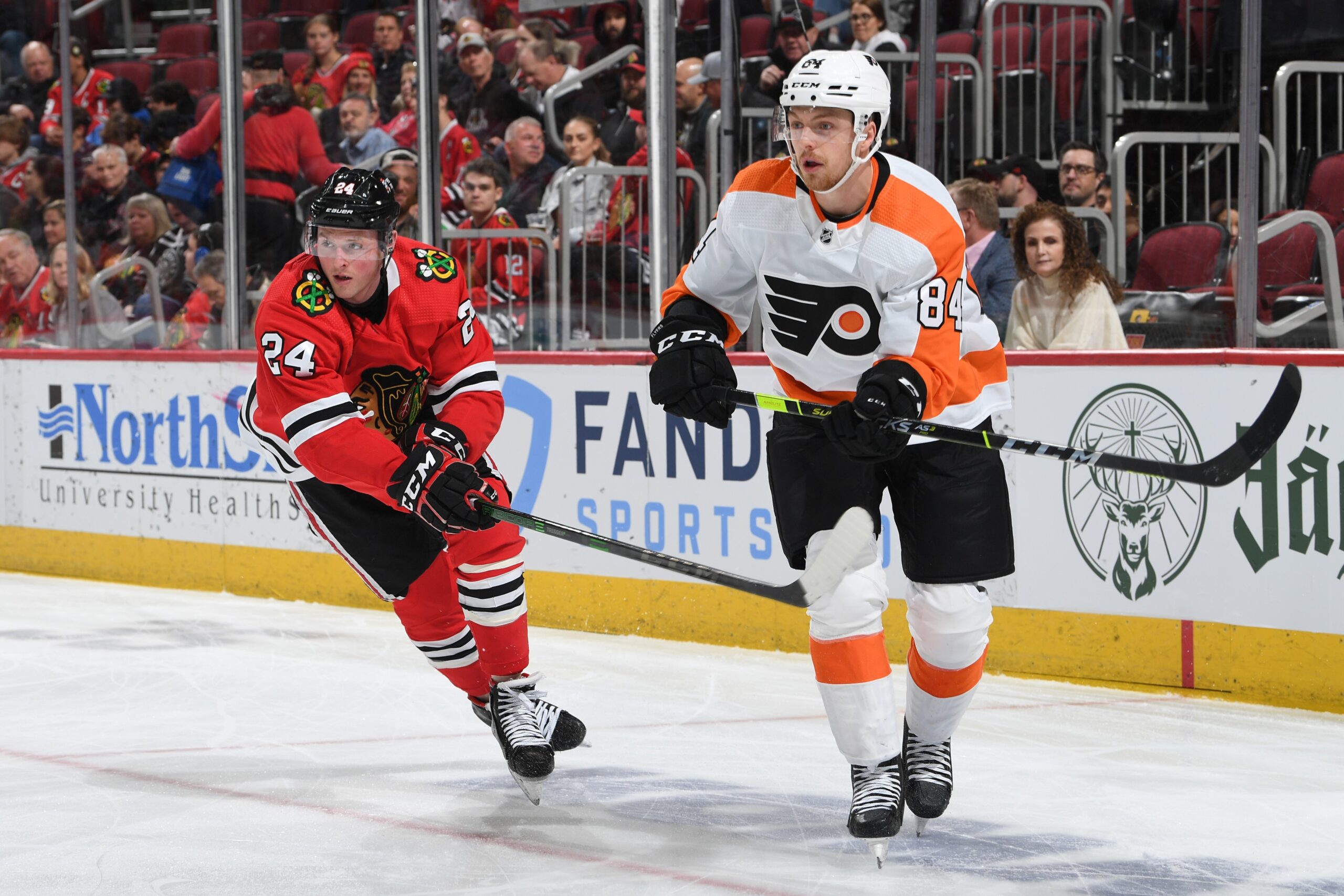 The Philadelphia Flyers’ two-game winning streak came to an end at the hands of the Chicago Blackhawks with the final score of 3-1. The Flyers and Blackhawks were essentially jousting and duelling for spots in the bottom tier of the NHL standings. With the win, the Blackhawks remain in 27th place, while the Flyers remain in 29th place with Seattle holding a two-game advantage on the Orange and Black but trail by three points.

The Flyers’ lone goal came off the stick of Kevin Hayes and Felix Sandstrom made 30 saves, but still remains winless, and a sloppy start to the first period proved costly after the Flyers were down 2-0 only six minutes into the game.

With the season coming to a close and both teams involved far away from the playoffs, this game had heavy implications on the draft lottery and the NHL standings. With a win tonight, the Flyers would’ve jump from 4th-last to 6th-last, whereas a win for the Blackhawks meant they would hold a stranglehold on the 27th spot with the Ottawa Senators well ahead of them, and the New Jersey Devils very close behind them. Depending on your stance with tanking and the lottery, this game was very important with the Seattle Kraken having a game in hand on the Flyers entering tonight and being three points behind them in the 30th spot.

After an emotionally charged victory last night over the Pittsburgh Penguins, the Flyers were caught flat-footed when former Flyer Erik Gustafsson ripped a simple looking wrist shot from the point that went over the shoulder of Felix Sandstrom only 105 seconds into the game.

With the Flyers looking a little lifeless to start this game, Jonathan Toews was called for a slashing minor on Kevin Hayes, potentially giving the Flyers a chance to tie the game in short order.

The 27th-ranked Chicago penalty kill made easy work of the 32nd-ranked Philadelphia power play. A power play that was 1 for their last 31 before Noah Cates’ power play marker last night, had a few chances on their first man advantage, but nothing all too dangerous for Kevin Lankinen.

With Toews coming out of the box, the Blackhawks penalty kill forced a turnover on Bobby Brink who was trying to pass the puck to Provorov at the point. Instead it was corralled by Sam Lafferty who then sprung the captain on a breakaway out of the penalty box. Toews made easy work as he slipped it through the five hole of Sandstrom for his second point in only 1:34 of ice time.

Not too long after Toews’ breakaway goal, two Flyer veterans hooked up on their first goal to cut the deficit in half. The Flyers pounced on a turnover of their own as Erik Gustafsson sent a no-look pass into no-man’s land, and Travis Konecny was able to pick it off and then send an outlet to Scott Laughton. Laughton found himself on a 2-on-1 with Kevin Hayes with the former finding the latter with a pristine pass for his 10th of the season.

The Blackhawks then came within inches of re-taking their two-goal lead on the next shift but Sandstrom was able to rob Reese Johnson with his blocker. Travis Sanheim was then called for a cross-checking minor on Alex DeBrincat, giving the 20th-ranked power play their first opportunity of the game.

The first minute was very sloppy from Chicago as they had issues entering the zone twice, including a Gustafsson miscue in the neutral zone. However, the final minute looked a lot better as they created chances from Gustafsson, Patrick Kane, and Seth Jones, all of which were stopped by Sandstrom. The Blackhawks generated several scoring chances after the power play but none bigger than Philipp Kurashev’s one-time opportunity in the slot that was thwarted by a diving Sandstrom. The Flyers were able to draw a penalty right after as Sam Lafferty was called for an interference minor.

After nearly a full minute in the offensive zone, with pass after pass, the Flyers didn’t muster a single shot on goal, looking too tentative. The second unit stepped on the ice and instantly created chances as Morgan Frost generated a scoring chance out of thin air but to no avail as Lankinen came up with a huge pad save. Owen Tippett was in and around the blue paint but he couldn’t find the puck that was loose somewhere in a mass of bodies.

With two minutes remaining in the first period, Scott Laughton was sprung onto a breakaway after a pristine outlet pass from Travis Sanheim, but he was stopped as he tried to slip it through the five-hole. Hayes corralled the rebound but his shot went just high and wide. The Blackhawks countered with a scoring chance of their own as Toews set up Dominik Kubalik with a one-time shot similar to Kurashev’s opportunity, but Sandstrom came up big again with the glove. The period ended with the Blackhawks up 2-1 but the Flyers holding a tight shot advantage at 14-13.

The second period started with the Flyers creating a few scoring chances, one hitting the post and then Hayes being stopped on a breakaway. Gustafsson was then called for a delay of game penalty for Chicago. The Flyers had one really good chance in the slot but Morgan Frost guided it straight into the breadbasket of Lankinen.

With not much happening for the majority of the period, the Flyers were flagged for a two-minute slashing penalty as Scott Laughton was caught hacking Seth Jones with 3:44 remaining in the second frame. The Blackhawks weren’t able to do much with their man advantage other than a possible bank-in attempt at the side of the net that was set up by Patrick Kane. Unfortunately, the Flyers were called for another penalty with 56 seconds left courtesy of a James van Riemsdyk hooking minor.

The Blackhawks once again weren’t able to take advantage of their power play as the first 64 seconds produced one shot on goal. The Blackhawks held a 9-7 shot advantage in the second frame and a slight edge for the game at 22-21, with the Flyers going without a shot in the final 12 minutes.

Right off the hop, Patrick Kane and the Chicago Blackhawks seemingly executed a perfect face-off play after Kane dipsy-dooed around the Flyers defense and almost pulled the “Peter Forsberg” on Felix Sandstrom. The Flyers were able to kill the last 56 seconds of the power play but the Hawks had a few dangerous opportunities. Only 3:09 into the final frame, the Flyers were called for yet another penalty, this time a Ronnie Attard hooking minor. The Blackhawks were already 0 for 3 but had recorded nine shots on goal. The Blackhawks fired three more shots on goal, while missing the net on another two opportunities, however the Flyers lived to tell the tale as they successfully killed their fourth penalty.

Kevin Hayes couldn’t control a pass from Joel Farabee on another Flyers odd-man rush opportunity, and through the turnover the Blackhawks were able to transition from defense to offense in a split second with Alex DeBrincat finishing off the passing play from Patrick Kane for his 41st of the season, but only his second goal in his last 11 games.

Shortly after the third Blackhawks goal, Hayes lost the puck again but this time just outside of the defensive zone. DeBrincat and Kane got too cute with their passing and it was eventually picked off by Travis Sanheim. The Flyers turned that turnover into an odd-man rush of their own, but Farabee couldn’t get his stick on Konecny’s goal-mouth pass.

Hayes’ nightmarish period continued as he was then called for a tripping minor with 9:09 remaining in regulation. The Flyers actually had two very dangerous chances while shorthanded, but Nate Thompson was stopped on his 2-on-1 opportunity and then Travis Sanheim just missed the net on his chance from the slot after Travis Konecny set him up beautifully. Unlike their previous three power plays, the Blackhawks came out lame with nary an opportunity but had a chance to ice the game with a three-goal lead once the penalty came to a close, but Tyler Johnson’s shot just missed the net.

Mike Yeo pulled Felix Sandstrom for an extra attacker with well over three minutes to go. The Blackhawks sent a long distance shot towards the open net but Keith Yandle was able to beat the puck to keep the score at 3-1. The Flyers struggled mightily to get anything going primarily due to their inability to set up.

With 1:23 remaining, Bobby Brink was able to draw a tripping minor. Brink rang the puck off the post right off the face-off, a massive scrum ensued in the blue paint but somehow the puck couldn’t find it’s way into the net as Riley Stillman was sprawled out on the goal line. The referees conferred after the whistle to review if the puck had crossed the line. It was a very quick review as the puck had not crossed the line.

Kevin Hayes then turned the puck over trying to enter the neutral zone to Jonathan Toews. He tried scoring into the empty netter but it was blocked away, however Sam Lafferty came flying for the loose puck but ended up crashing into the end boards after Joel Farabee cross-checked him. Both players were called for coincidental roughing minors.

The Flyers didn’t manage any more shots or offensive zone time as the Blackhawks were able to take care of business on home ice.

The Flyers head north of the border on Wednesday night as they visit the Winnipeg Jets at Canada Life Centre for their second-to-last game of the season.