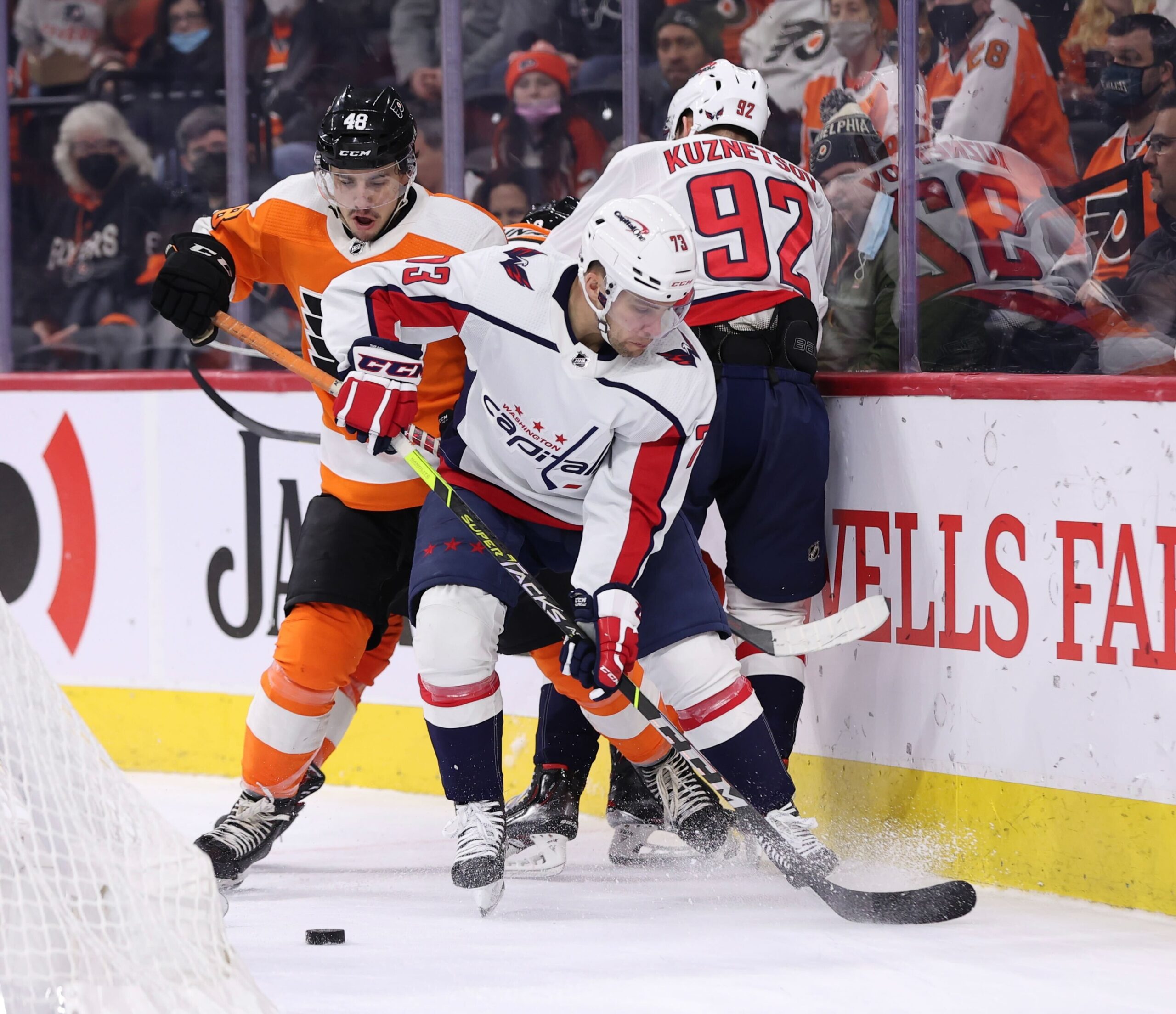 Flyers stumble to Capitals late in 3rd to start homestand

The Philadelphia Flyers started an 8-game homestand on Thursday after succumbing to Sidney Crosby and Co. in Pittsburgh on Tuesday. It was another tough loss that you can add to the pile, but those efforts seemed to be appreciated by most, considering the bottom half of our line up are practically all AHL’ers. When talent is a lackluster, coaches have tendencies to simplify their offensive game by playing along the boards, dumping pucks, and working pucks to defensemen in hopes traffic fools the goaltender via screens, deflections, and rebounds.

The game unfortunately started with a Flyers powerplay, where nothing happened. It looked like that philosophy imposed itself on the ice when the Flyers were in possession of the puck, outshooting the Capitals 11-8 by the end of the period. Their approach ultimately did not pay off, and it was Washington Capitals defenseman Michal Kempny who scored his 1st of the season with a high screen in the center of the Flyers defensive zone, finding a way through Martin Jones who otherwise had a decent period.

Hopefully we see the Flyers’ forwards continue to take some more risks as they get their games under their feet. Both teams’ big-name defensemen in John Carlson and Ivan Provorov had some highlight reel turnovers that their goalies reluctantly bailed them out on. Cam Atkinson has had some serious looks off a turnover and a Claude Giroux thread, but appeared to shank his shot, but Carlson actually found a way to block it. The first period ended 1-0 Caps, but the Flyers were still in this game.

Well, this period was surely going to be good when we saw Gerry Mayhew get a crack with the first line with Giroux and Atkinson to start the 2nd period, and we learned as the period went on, he was going to stay for a bit. The Caps appeared to have taken some notes from the 1st, because they looked noticeably more enticed to stay in the shooting lanes of the Flyers’ defensemen.

Keith Yandle appeared to have gotten smacked with a stick up high, causing some moans in the crowd, but the faithful Flyers fans became irate when Giroux was boarded from behind, with no ref setting the platform for a Peco Power Play.

After some more jousting between the two teams, Scott Laughton decided he had enough of Trevor van Riemsdyk, and gave him a few thoughts of his own with his fists (that just had to have been weird for JVR to spectate, right?). We really haven’t seen this kind of engagement with the team in a while, at least to my eyes.

Also, it was Gerry Mayhew time. The Flyers cashed in on their second powerplay thanks to the work of the 2nd unit, which is odd to say. I think anyone who pays attention to the Flyers knows that the chances of seeing a second unit powerplay goal is as rare as winning the Powerball, but it happens, and it happened tonight at the Wells Fargo Center.

We see you, Gerald. 👀 pic.twitter.com/7rtQ4z5alQ

Morgan Frost made a lot of nifty work along the left boards to suppress pressure from two opposing Capitals, working the puck to Isaac Ratcliffe and Oskar Lindblom, where the pair executed a neat 1-2-3 passing play. The initial attempt actually led to Mayhew ripping a one timer in Giroux’s spot, but on his second opportunity he had the chance to take his time with his shot and he did, and we had a 1-1 game. Little moments like these are really important for players like Gerry Mayhew, who prove they belong somewhere in the National Hockey League.

All of the sudden the refs decided to get soft on the ice and penalized Ratcliffe for finishing a check. Then Atkinson makes things worse, with a rare delay of game, flipping the puck over the glass of the opposite end of the ice, creating a 5 on 3 Powerplay for 45 seconds. Alex Ovechkin, who had flubbed on a few chances already tonight, hammered a puck off of the post before the 5 on 3 penalty turned into a 1-man advantage. Still, the Caps found a way to score, with Joe Snively finding his own rebound to pot his 4th of the season.

That was one of those plays that can feel like an absolute gut punch. Fortunately for the crowd and the team, they kept trotting as they exemplified over the last 48 hours. Off the transition, Giroux sprung Travis Konecny with Travis Sanheim on a wicked cross-ice pass through the opposing blue line, slinging the Travii into action where Konecny attempted to out-sauce Giroux, dishing a tap-in feed, where Sanheim made no mistake shelfing the puck for his 4th of the season.

Buckle up for the third period, folks. pic.twitter.com/nmQiNIDuHk

Dare I say, it was a fun hockey game thus far in Wells Fargo Center tonight?

Both teams traded scoring chances back and forth in the first 3 minutes of the period. A few minutes later I saw a beauty of a play off the rush, featuring JVR, TK, and Braun? Brauner went high glove and was robbed, and this felt like what would be the beginning of a victorious 3rd period.

Giroux pulled a hooking power play with 12 minutes left in the third, and Scott Laughton abruptly took a nasty knee on knee collision with Tom Wilson on the ensuing zone entry of the PP, creating a rare 5 on 3 opportunity that the Flyers have yet to finish on this season. The Flyers decided to keep the drought going, but JVR had 2 point-blank chances, and Konecny hesitated on a backdoor feed, and the score remained 2-2.

Laughton got caught on a revenge penalty against Wilson along the boards moments later and sent the team back on the PK to kill another penalty, one feature that seemed to stand well on the team tonight.

Things changed late in the game when Sanheim burnt Nicklas Backstrom playing defense, and slipped the puck to the man himself, Gerry Mayhew who buried his second of the night and 5th goal of the season. It is indeed Mayhem for Mayhew in Philadelphia right now and the Flyers sat 3-2 with less than 4 minutes to go in the third period for what was setting up to be a marvelous win in a lost season.

Unfortunately, Garnet Hathaway tied it on his 9th goal this season with just a little under 3 minutes to go, deflecting the puck off his body from a point shot where Martin Jones really had no chance to react.

Enter the end of the game in the chat: Ivan Provorov made a no look pass to a Caps player, where Hathaway buried his second and 10th of the season just minutes apart from the game-tying goal. The Flyers pulled their goaltender, but fell short, and the empty-net goal was scored from their end which just made things sting a bit more. Goodnight, Flyers Nation.