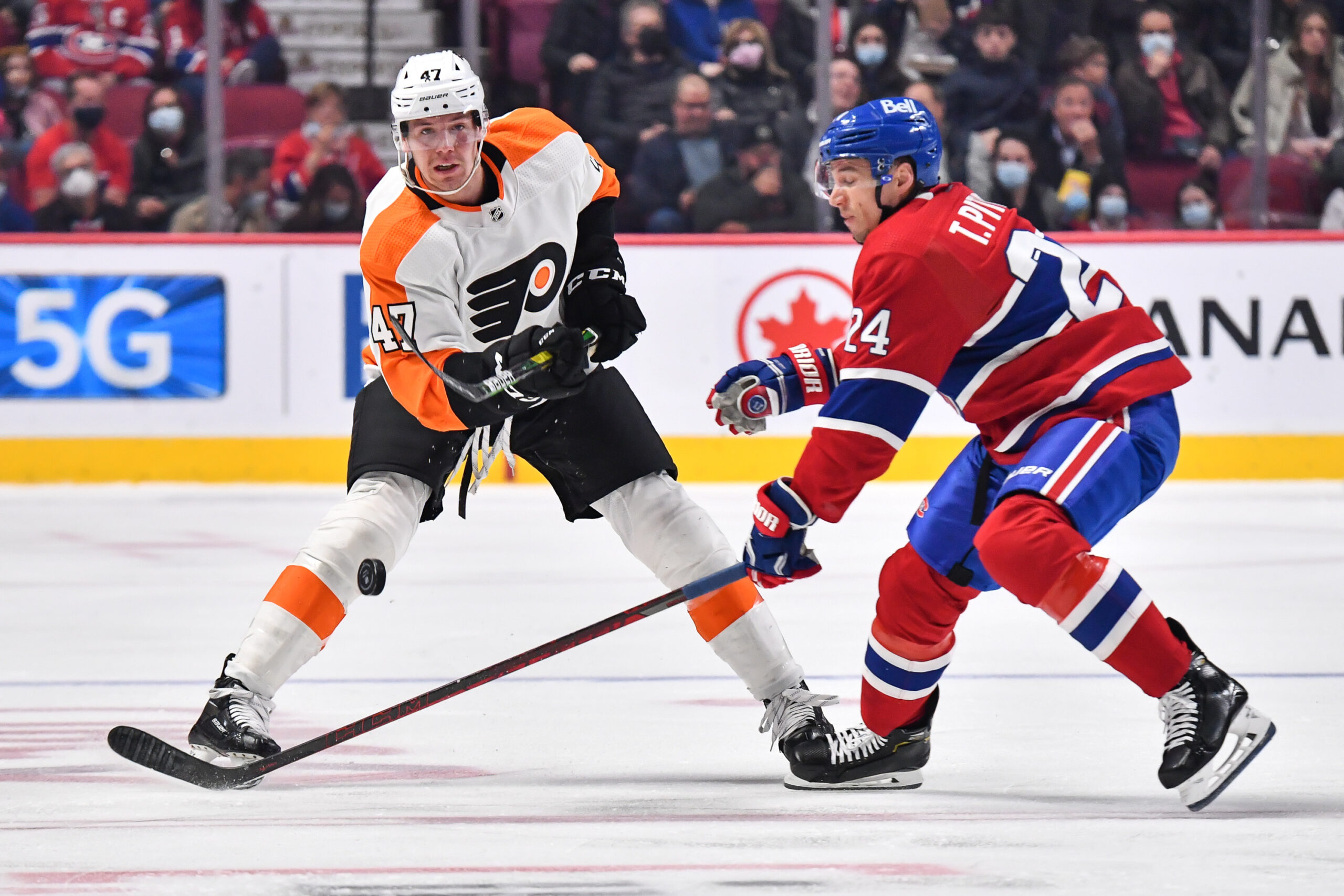 The Philadelphia Flyers snapped their six-game losing streak and avoided their third consecutive season series sweep of the season as they took down the Montreal Canadiens 6-3. James van Riemsdyk scored 2 goals and added an assist, Ivan Provorov scored a goal and added an assist, while Travis Konecny, Oskar Lindblom, and organ Frost added the other 3 goals.

Martin Jones was spectacular tonight as it truly became an odd-man rush-fest with no defense being played with both teams near the bottom of the standings. Martin Jones made 31 saves, Bobby Brink added 2 helpers, Linus Hogberg recorded his first career point in his NHL debut, and Carey Price did not look right at all tonight.

Tonight’s barn-buster featured the NHL’s 30th-ranked team facing off against the NHL’s 31st-ranked team. The Flyers were looking to avoid yet another season series sweep, this time at the hands of the Canadiens. The Flyers’ season series sweeps have been a continuing saga after Buffalo completed their sweep with two victories over the weekend and then the Maple Leafs securing theirs with a 5-2 win on Tuesday. The Canadiens had won both games so far courtesy of overtime wins.

Tonight was Carey Price’s third game of the season as he looked for his first win, and the Flyers’ Linus Hogberg made his NHL debut after being an emergency call-up with Kevin Connauton falling to an injury last game. Price’s first two games had been successful in terms of GAA and save percentage, but the Canadiens were shutout in both games as they fell 3-0 to the New York Islanders and then 2-0 to the Minnesota Wild, so he was looking for some goal support in his third game.

As expected with two bottom-feeders, the offensive chances were few and far in between with both teams sharing one scoring chance apiece in the first seven minutes. Heading into the first commercial break the shots were only 1-1 but the Flyers had a heavy hit advantage at 7-0. Shortly after the commercial break had ended, the Flyers broke the deadlock with a fortuitous turnover off the stick of Carey Price. James van Riemsdyk forced Price to make an ill-advised pass behind the net, Kale Clague tried to quickly move the puck out of the corner but it hit Bobby Brink, who then sent it towards van Riemsdyk at the side of the net. He was able to whack away at the rebound as Price was getting back into position for his 22nd goal of the season.

Not long after the goal, Owen Tippett’s rush towards the net drew a Flyers power play after Clague was called for a hooking minor. Ten seconds into the man advantage and the Canadiens failed to record a shot on their odd-man rush, the Flyers then countered with an odd-man rush of their own but they fumbled the play with a bad pass, which then led to another Canadiens odd-man rush but they missed the one-timer with an open cage to shoot at. With 22 seconds left on the power play, the Canadiens found themselves on an abbreviated odd-man rush yet again but the Flyers were able to get back in time and stop the chance from materializing. It represented the fourth odd-man rush for the Canadiens in the first 11 minutes of the game, with no shots recorded on any of them.

After all the scoring chances and hoopla, the shots on goal total favoured the Flyers 4-3 heading into the second commercial break. The Canadiens’ Cole Caufield had a great scoring chance in the slot to tie the game up but Martin Jones stood his ground and boxed out the opportunity. The Flyers then doubled their lead after Ivan Provorov ripped a shot blocker-side on Price. The Flyers won the offensive zone draw, van Riemsdyk won the battle off the draw and found a streaking Provorov who made no mistake on his snapshot for his 9th of the season.

After a heavy scrum in and around Martin Jones’ blue paint, the Canadiens slammed home the loose puck to cut the deficit in half. Upon further review, Brendan Gallagher spiked the puck like a football to Mike Hoffman who ended his 21 game goal-less drought. For whatever reason, there was no review so the goal counted even though there was a mass of confusion amongst all parties involved.

On the very next shift, Caufield hit the crossbar and then Hoffman was stopped on an odd-man rush of his own. The Canadiens’ pressure was mounting and the Flyers were called for an elbowing minor courtesy of Travis Sanheim with only 58 seconds left in the period. With only a few seconds remaining, the Habs’ one-timer hit the crossbar, then the post, and then Gallagher corralled the rebound but missed with an open net at his disposal. With all the momentum after their fortuitous goal, the Canadiens ending up outshooting the Flyers at the end of the period, 9-7.

After killing off the remaining 62 seconds of the Canadiens power play, the Flyers found themselves on their second man advantage of the game after Travis Konecny was interfered with by Jeff Petry. The Canadiens came close to tying the game twice with another odd-man rush, while the Flyers countered that chance with a few of their own, but Price stood his ground with some strong pad saves. The Flyers then created a several scoring chances after the power play had ended but Oskar Lindblom’s shot went high and wide, Bobby Brink’s shot went high and wide, and van Riemsdyk’s quick one-touch went straight to the shoulder of Price.

Carrying momentum from their first goal, the Canadiens kept coming in waves and they finally tied things up after Jake Evans deflected a Jeff Petry point shot over the shoulder of a fooled Martin Jones. Montreal was very close at taking the lead as they had several goal-mouth chances, but the Flyers survived to tell the tale as Oskar Lindblom came down and broke the dead-lock with a goal that completely fooled Price. Lindblom’s shot went through a maze of defenders that were blocking Price’s vision as Lindblom snapped his 12 game goal-less drought.

Continuing the trend of odd-man rushes, the Flyers finally converted on one of their own after Ronnie Attard found Travis Konecny streaking into the zone. His snapshot beat Carey Price glove-side with the goaltender falling to his knees relatively early. The goal was Konecny’s 15th of the season and extended his point streak to 4 games.

The second period was wilder than the first as both teams had an inordinate amount of odd-man rushes. The Flyers outshot the Canadiens 18-17 in the second period alone but Martin Jones really stood his ground with Montreal coming in wave after wave.

After an exciting brand of no-defense hockey in the first 40 minutes, both teams came out for the third period playing very tentatively and passive. With a two-goal lead, the Flyers sort of sat back at first and let the Canadiens offense into the defensive zone with ease. Montreal kept missing the net with their chances however, keeping things within two heading into the first commercial break.

With things at a lull, the Canadiens’ Rem Pitlick was called for a tripping minor with 8:25 remaining giving the Flyers power play an opportunity to completely ice the game away. As expected, the best chance came from the shorthanded Canadiens as former Flyer Tyler Pitlick hit the crossbar after the Flyers let Montreal just waltz into the zone with absolute ease.

In a span of a minute and 20 seconds, the Flyers added two more goals courtesy of Morgan Frost and James van Riemsdyk. First, Noah Cates won a board battle in the offensive zone and then fed Frost for the one time finish.

Morgan Frost off the pretty pass from Noah Cates 💪 pic.twitter.com/iqrVdQPDA0

James van Riemsdyk then pounced on a bad giveaway off the stick of Rem Pitlick in the neutral zone. He ripped a snap shot blocker side to give the Flyers a four-goal lead.

The steal and snipe by JVR for his second of the night! pic.twitter.com/3jGurwGOtT

37 seconds later, Cole Caufield scored his 19th goal of the season after he just threw the puck towards Martin Jones from near the corner boards and slipped it through his five-hole. But the Flyers held on and won the game 6-3.

The Flyers head back home to take on their cross-state rival Pittsburgh Penguins in Philadelphia on Sunday evening.