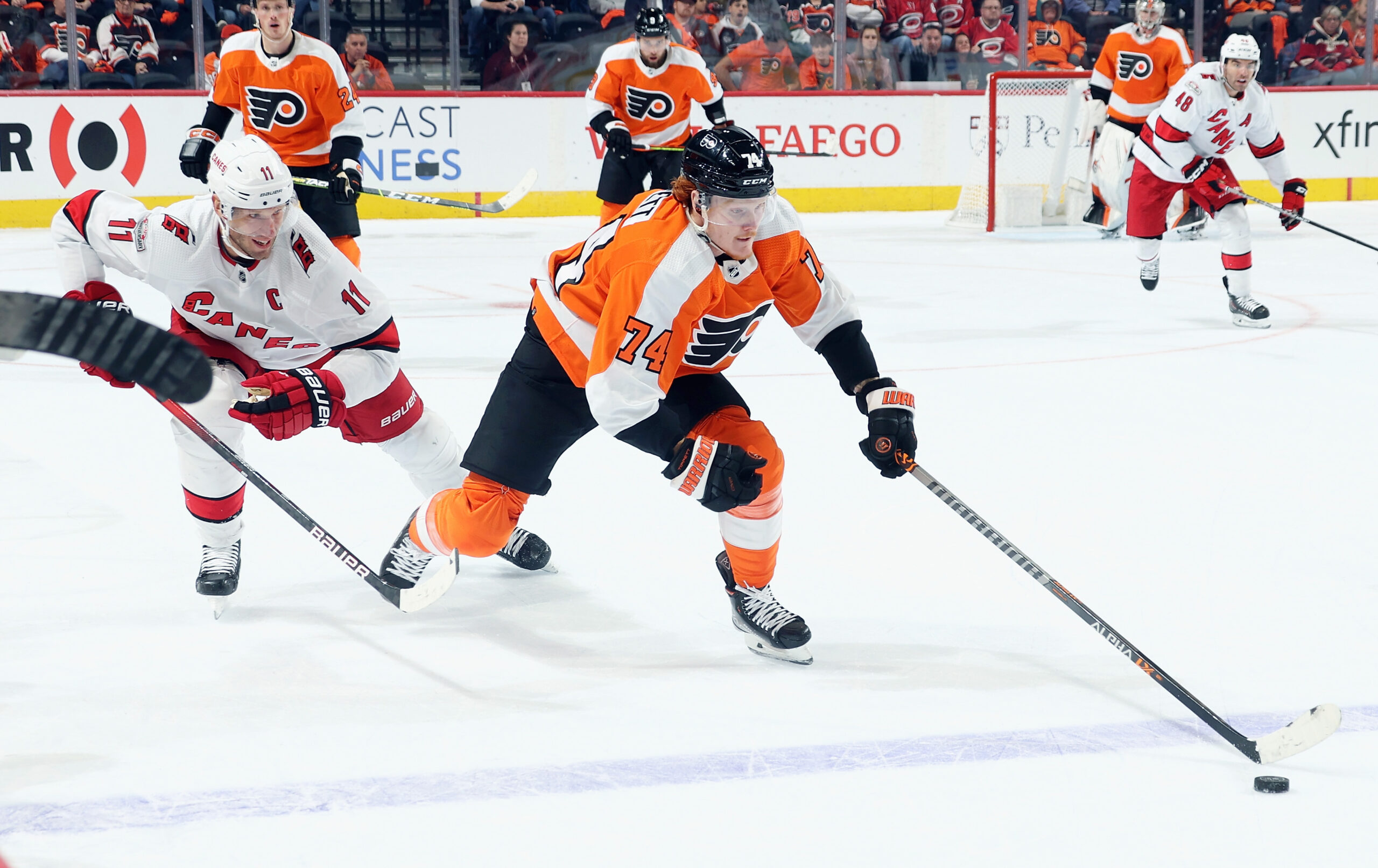 Flyers Rally Down 2, Blow it Late, and Lose in Overtime, 4-3

The Philadelphia Flyers overcame another two-goal deficit but blew a one-goal lead with a few minutes left as the Carolina Hurricanes rallied and won the game in overtime, 4-3.

Carter Hart allowed 4 goals on 38 shots, the Flyers got goals from Nicolas Deslauriers, Owen Tippett, and Wade Allison, and Lukas Sedlak collected 2 assists, but it was Brent Burns’ game-winning goal that spoiled their final game in the month of October.

The Flyers had their chances all game, including 6 power plays and one with 4:53 remaining in regulation, and nevertheless the tenacity was still on full display, unfortunately the Hurricanes were just as tenacious.

The first place Philadelphia Flyers played host to who many thought would win the Metropolitan Division by season’s end in the Carolina Hurricanes. The Hurricanes are coming off a 5-2 loss last night against the New York Islanders with Freddie Andersen in net, giving way to Antti Raanta tonight against the Flyers. Kieffer Bellows made his Flyers debut on the third line with Morgan Frost and Zack MacEwen – with the former coming off a game in which he was benched. With a healthy amount of forwards and defensemen, the Flyers opted back to the 12 forwards/6 defensemen lineup with Nick Seeler beating out Egor Zamula for the final spot.

Lukas Sedlak was called for an early penalty as he was sent to the box for a goaltender interference minor, one in which he was tripped up by Stefan Noesen on his way into the goaltender. The Hurricanes had a slow start to the man advantage as the Flyers controlled the puck for a lot of it but near the end they fired several shots towards the goal that missed but still created a lot of dangerous pressure.

However, shortly after the kill, the Carolina Hurricanes take the early lead from the stick of Jordan Staal in yet another weirdly soft goal allowed by Carter Hart. It bounced off the boards after a Brett Pesce purposeful shot, onto the stick of Staal, and somehow slipped in between pad and post.

At the 11:16 mark of the first period, Andrei Svechnikov was called for a slashing minor, giving the Flyers an opportunity to tie things up early after a great aggressive shift from Ivan Provorov and Tony DeAngelo.

The first unit of the power play was on the ice for the first 85 seconds and they controlled the puck in the offensive zone the whole time, creating several opportunities primarily off the sticks of Owen Tippett and DeAngelo. With 7:56 remaining, Rasmus Ristolainen was called for his second interference penalty in as many games and the Hurricanes looked a lot more prepared this time around. They were aided by a collision between DeAngelo and Travis Konecny – with the latter hobbling off the ice – and with the brouhaha that ensued the Canes fired seven shots on goal with Carter Hart having to fend for himself on a few golden opportunities. The Flyers survived the kill and Konecny was able to return for his next shift.

With 4:56 remaining, Jordan Martinook doubled the Carolina lead after finishing off a good passing play that started with Staal to Jesper Fast to Martinook in the slot for a quick finish past Hart. They won a board battle against Ristolainen and Seeler and set up as quickly as they scored with Staal being a real thorn in the side of the Flyers yet again.

The final four minutes got really feisty as the trailing Flyers created a few scrums at the end of a couple whistles, the first one started by Zack MacEwen and the second one having been instigated by Bellows. Unfortunately, the Flyers were called for an extra minor during the second scrum as DeAngelo and Travis Sanheim were in the box for the Flyers versus Brent Burns of the Hurricanes, all for unsportsmanlike conducts. The Flyers killed off the penalty – their third of the period – and they headed into the intermission down 2 and being outshot 14-9.

The Flyers started the second period with a little more gusto and because of it, they were able to get the Hurricanes to throw that puck out of play for a delay of game penalty. They weren’t able to score on the power play but it didn’t take them long after to get off the schneid. Wade Allison started the play with some hard work along the boards, sent a pass to Lukas Sedlak, who quickly fed it to Nicolas Deslauriers in the slot for his first goal as a member of the Philadelphia Flyers.

Only seconds later, Brent Burns was called for a tripping minor, giving the Flyers a third chance with their man advantage. This time around the flyers connected with their newly-formed top unit coming through. Konecny and Owen Tippett played a little give-and-go with the latter ripping one past Raanta as the fighting Flyers made yet another comeback. 2 goals in 2:04.

The Hurricanes were inches away from retaking the lead only seconds after the Flyers had tied it as Jordan Martinook was robbed by the pad of Hart in the slot, the puck was loose for a short while as Hart sprawled back in time to cover it.

With Carolina humming to a new tune, the Flyers were a little flat footed and were then called for a slashing minor, courtesy of Scott Laughton. After killing their fourth penalty – only by the slimmest of margins as the Hurricanes clanged one off the post – the Flyers went back on the power play with Jesperi Kotkaniemi getting the hook for a slashing minor. The Flyers were unable to score or create much of anything but found themselves on yet another power play shortly after with only 3:42 remaining in the second period after Sebastian Aho was called for a cross-checking minor.

Right off the faceoff, Tony DeAngelo’s shot through traffic and found it’s way past Raanta off the post after a deflection from Laughton, but even with the Flyers hacking away, Raanta was able to locate the puck and cover up. That was all she wrote on their fifth man advantage of the game, but the Flyers overcame yet another two-goal deficit as they headed into the third period all knotted up at 2 with the Canes still leading in the shot chart, 24-17.

The Flyers started the third period with several scoring chances off the sticks of Travis Konecny off the wing on an odd-man rush that was blockered away, then Morgan Frost had a similar opportunity minutes later, with the rebound being stopped after Seeler corralled the puck. Then DeAngelo fluttered a puck that troubled Raanta with the rebound going to MacEwen who was also stopped.

The Flyers kept coming in waves and didn’t stop there as Wade Allison on the following shift gave the Flyers their first lead of the game. Lukas Sedlak set up Allison for a one-time chance that just snuck past Raanta as they both collected their second points of the game.

After taking the 3-2 lead, the Flyers defensively took over the neutral zone and starting clogging anything the Hurricanes tried maneuvering. Their dump-and-chase method slowed down the Hurricanes and allowed the Flyers to maintain control and climb back onto the shot clock as well as they only trailed by 4 (30-26) by the 15 minute mark of the third period.

With 4:53 remaining in regulation, Kotkaniemi was called for another penalty, this time cross-checking Joel Farabee – who has really drawn the ire of his opponents lately with late penalties. Not much came out of another power play but at the very least it killed off 2 minutes from the clock.

Unfortunately with 2:05 remaining in regulation, Martin Necas ripped a shot off the wing past Carter Hart’s blocker to tie things up late. With a burst of energy, the Hurricanes came close twice within the next minute to retake the lead but Hart was able to stop a fluttering Svechnikov deflection before the Hurricanes took a timeout with 49 seconds left.

Konecny started the overtime period with two scoring chances in the first 35 seconds but both times was robbed by Raanta with the first coming off the wing and the second through the middle.

Carolina had chance to end the game shortly after from the game-tying goal scorer in Martin Necas as he swerved his way into a breakaway opportunity and even had a chance on the rebound but Hart shut the door.

With 54 seconds left in overtime, Necas passed it to Aho who one-touched it to Brent Burns who ripped it past Carter Hart to take the 2 points and the game.

The Flyers hit the road for three games starting with a matchup at Madison Square Garden against the New York Rangers on Tuesday night.