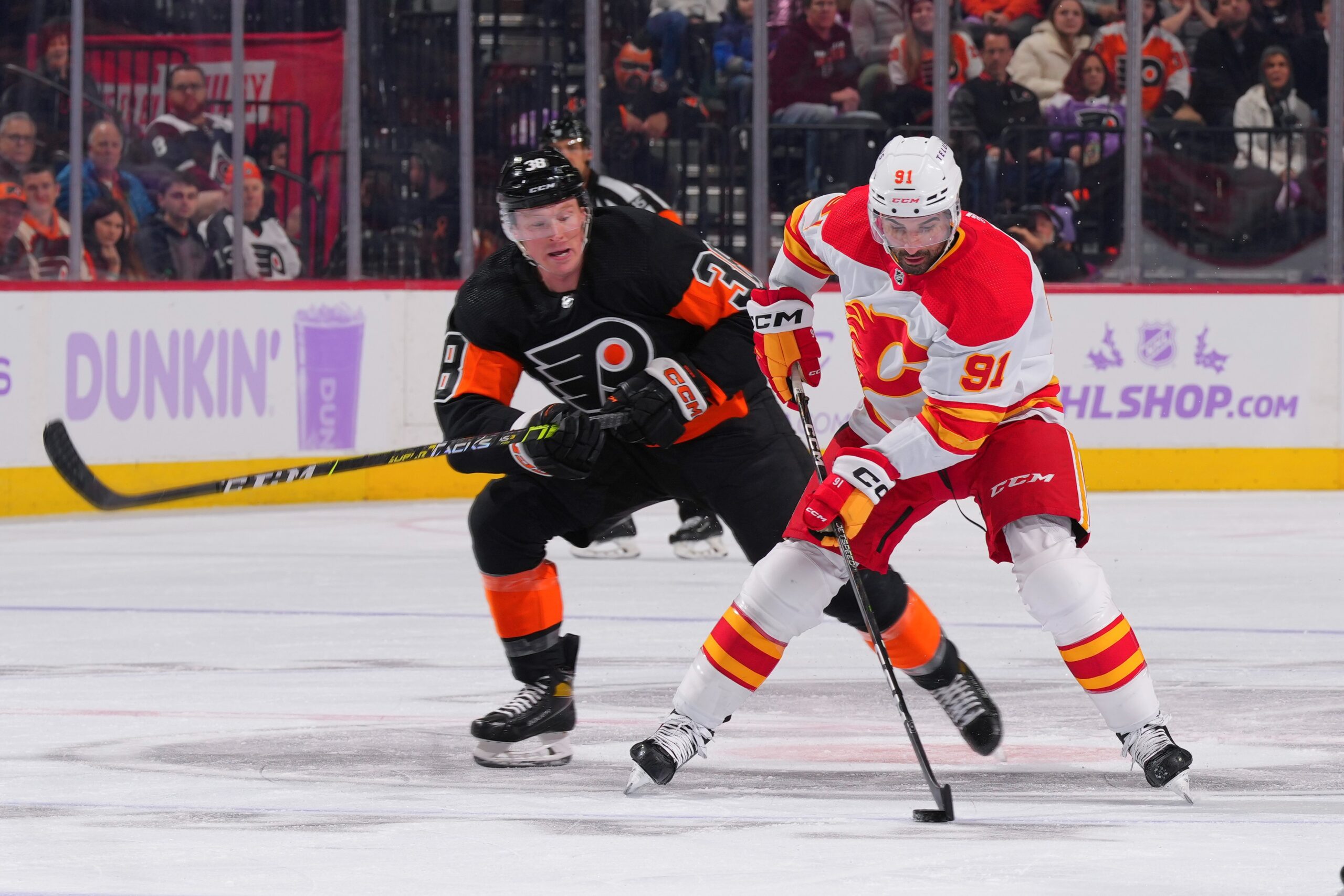 The Philadelphia Flyers have now lost 7 straight games and 10 of their last 12 after falling to the Calgary Flames 5-2 on Hockey Fights Cancer Night at Wells Fargo Center.

Jonathan Huberdeau and Dillon Dube scored goals in quick succession in the first period to put the Flames up 2-0 and they never relinquished the lead even though the Flyers came knocking a few times. The Flyers received goals from Tanner Laczynski, who recorded his first career marker, and Joel Farabee who snapped an 8-game goalless drought. Carter Hart stopped 24 shots, and Jacob Markstrom stopped 23 with a few big ones down the stretch to keep the Flames up by one and they were able to seal the game with a few empty netters.

As lady luck would have it, the Flyers were without Travis Konecny and Scott Laughton as they embarked on a four-game week that started with the Flames tonight. More line juggling was required ahead of the game as the trio of Morgan Frost, Owen Tippett, and Joel Farabee remained at the top of the lineup. Following them were Kevin Hayes, Noah Cates, and Zack MacEwen, a third line of Patrick Brown centering Tanner Laczynski and Max Willman while Nicolas Deslauriers, Lukas Sedlak, and Kieffer Bellows completed the set.

The Flyers started the game relatively well, got some shots, and created a few chances, none grander than Kieffer Bellows having one in a high danger spot. However, notorious Flyer-killer Jonathan Huberdeau, who entered the game with 5 goals against Carter Hart in 6 games, scored the first goal of the game on an odd-man rush that was created by a turnover on Tony DeAngelo. Blake Coleman poked the puck off of his stick at the blue-line, which led Huberdeau on a 2-on-1 and he decided to rip a shot, which was the right call as he beat Carter Hart blocker-side for his 3rd goal of the season 4:43 into the game on just their second shot.

The Flames weren’t creating much of anything to start the game as the Flyers’ tenacity was on full display, however Justin Braun was called for a tripping minor at the 9-minute mark, giving the Flames a dangerous opportunity to double their lead. Rasmus Ristolainen had other ideas as he not only poked the puck at the blue-line, but he went the other way with it and held the puck along the boards in the offensive zone for over 15 seconds. The Flames recorded no shots and the Flyers showed off an aggressiveness nature that has not been seen all year while shorthanded.

With 6:54 remaining in the period, Zack MacEwen dropped the gloves with Dennis Gilbert – who was in his 3rd fight in just 5 games as a Calgary Flame – and the duo took part in a spirited bout with knuckles being thrown on both ends until MacEwen was brought down.

The Flyers hadn’t recorded a shot on goal in several minutes, the Flames were dictating offensive zone time, and MacEwen decided it was time to spark his team as the bruising Flyers have done all year – by dropping the gloves. Unfortunately, the Flames were sparked themselves as they came close to doubling their lead from chances created by Mikael Backlund and Blake Coleman. On the following shift, Dillon Dube ripped a snap shot on another odd-man rush crated by Blake Coleman, this time glove-side, as the Flames took an early 2-0 lead at the 13:51 mark of the period.

Fear not as the Flyers marched down the ice off the ensuing face-off and cut the deficit in half. It was a harmless play by Kevin Hayes, who took the puck to the point and fired a spin-o-rama shot towards Jakob Markstrom with several black jerseys in front. Fortunately, Tanner Laczynski was able to deflect the puck past Markstrom to get the Flyers on the board while simultaneously notching his first career NHL goal 42 seconds later.

Called up and chipping in.

58 seconds after the goal, Nikita Zadorov was called for a tripping penalty on Kieffer Bellows, giving the struggling power play a golden opportunity to tie the game in quick order. They registered one shot on goal but had issues creating dangerous scoring chances, let alone being able to set up in the offensive zone, a strong representation as to why they are 28th in the NHL. The period ended with the Flames up 2-1, but the Flyers had a 10-9 shot advantage while were being outhit 10-9 themselves.

It didn’t take the Flames long to double their lead as Rasmus Andersson’s shot was deflected in by Joel Farabee and Tanner Laczynski at the 3:29 mark of the period to give them a 3-1 lead.

It was a very quick, fast-paced, and fast-moving period, not much was going on and with 7:25 remaining, the shots favoured Philadelphia 5-4, the score favoured the Flames 1-0 in the period and 3-1 on the scoreboard overall, and the neutral zone was the happening spot as most of the plays were being made or being stopped there. Milan Lucic was called for a tripping minor on Joel Farabee, giving the Flyers power play a chance to cut the deficit in half again at a very critical juncture of the game.

Unfortunately it was a replica of the first man advantage with the Flames having the better scoring chances. Farabee looked to have gotten clipped in the face at the end of the man advantage that clearly went undetected and ensuing off of that turnover, Lucic was sprung out of the box but fumbled with the delivery for a little bit, before taking a shot on goal that was gloved down by Hart.

Another bad start to a period for the Flyers as Kevin Hayes was called for a high-sticking minor only 18 seconds in. Fortunately the Orange and Black had another strong penalty kill, keeping the deficit at 2. Things weren’t getting any easier for the Flyers who had issues traversing the neutral zone and were being out-shot 6-1 at the 8-minute mark. A fortuitous turnover from Andrew Mangiapane ended up in the back of his own net as his pass went straight to Farabee, who then walked in and fired a snap-shot past Markstrom to cut the deficit in half.

Knowing a hit was coming, Andrew Mangiapane seemed to have panicked a little and tried to make a play instead of bracing for the hit and in the end he not only took the hit, but gave the Flyers life. On the very next shift Mangiapane almost set up a goal but Carter Hart stopped Nikita Zadorov’s shot from the point and then Nazem Kadri’s rebound opportunity that followed.

Once again, down by one goal and the ability to tie the game, the Flyers found themselves back on the power play after Kadri was called for a holding minor with 7:44 remaining. A far better showing on the power play could’ve been even better had Kevin Hayes been able to capitalize on his one-time bomb but the puck had gone wide. Morgan Frost and Owen Tippett had chances of their own but they weren’t able to find the back of the twine as Markstrom was able to keep the puck out.

With about two and a half minutes remaining, John Tortorella pulled Hart for the extra attacker and the Flyers came so close to tying it up on several occasions with Farabee, Tippett, and MacEwen hacking away. However as fate usually has it with the empty net, the Flyers went from being robbed to being down by 2 in a split second as Blake Coleman corralled the rebound, waited a bit, and then shot it down the ice to seal the game. Trevor Lewis – the player the Flyers wanted to draft instead of Claude Giroux – ripped one into the empty net to make it 5-2 after the Flyers coughed it up in the neutral zone a little later.

The Flyers came close but as they say, “close only counts in horseshoes” as the Flyers had several opportunities to tie it up late but weren’t able to and and the nail in the coffin was the empty net goal right after Farabee was robbed. Hart started off by allowing 2 goals on the first 5 shots but kept the game as close as possible the rest of the way but the Flyers were not able to snap their six-game losing skid as the losses continue to pile up.

The Flyers head to Washington on Wednesday to face the Capitals in a divisional rivalry game at Capital One Arena.

Flyers to play without Konecny and Laughton, Hayes on wing as Flyers try to erase losing skid on Hockey Fights Cancer Night
Flyers Give Updates On Injuries, Laughton Placed On IR, Jackson Cates Called Up