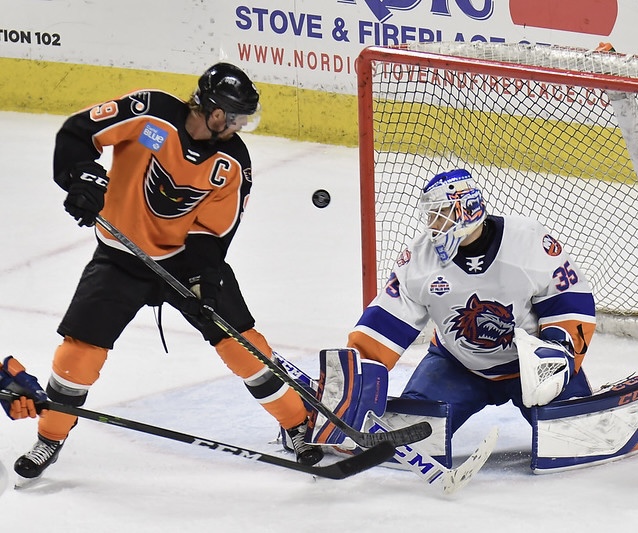 (Courtesy of the Lehigh Valley Phantoms)

The Philadelphia Flyers have added another veteran to the mix in training camp, signing forward Cal O’Reilly to a Professional Tryout contract.

O’Reilly has served as captain of the Phantoms for the last two seasons while helping mentor some of Philadelphia’s prospects and serving as a strong veteran presence in the organization.

The 35-year-old center from Toronto, Ontario, is the sixth player joining training camp on a PTO alongside fellow forwards Artem Anisimov and Antoine Roussel, and goaltenders Pat Nagle, Tyler Wall, and Nolan Maier.

O’Reilly originally joined the organization in 2019 after signing a two-way deal with the Flyers that offseason. He served as a co-captain alongside Andy Andreoff and Nate Prosser in his first year with the Phantoms, with each player rotating the “C” on their sweaters. He was given outright captaincy in 2020-21 and hasn’t looked back since.

O’Reilly is used to serving in a leadership role in the AHL, as he was previously captain for the Utica Comets, Rochester Americans, and Iowa Wild before joining the Flyers organization.

The center posted 21 goals and 32 assists for 53 points in 75 games with Lehigh Valley last season, with his goal total coming as a single-season career-high. His assist and point totals were also the most he’s registered in a season since 2018-19 with the Iowa Wild (51 assists, 67 points).

O’Reilly’s resume outside of the AHL includes NHL stops with the Nashville Predators, Arizona Coyotes, Pittsburgh Penguins, and Buffalo Sabres, and parts of two seasons with KHL club Metallurg Magnitogorsk. He also skated in his 1,000th professional game this past season with the Phantoms against the Laval Rocket and currently sits 32nd all-time in AHL games played (826) and is second among active players behind Calgary’s Brett Sutter (974).

O’Reilly will likely be back with Lehigh Valley this season, but the Flyers are giving anyone and everyone in the organization a chance to show their mettle as they continue to power through John Tortorella’s first training camp with the club.

The head coach of the Flyers knows how pivotal this season is for his players, the organization, and the fanbase, and he has been relentless and passionate in trying to put together a competitive and reliable roster together in his inaugural season in the City of Brotherly Love.