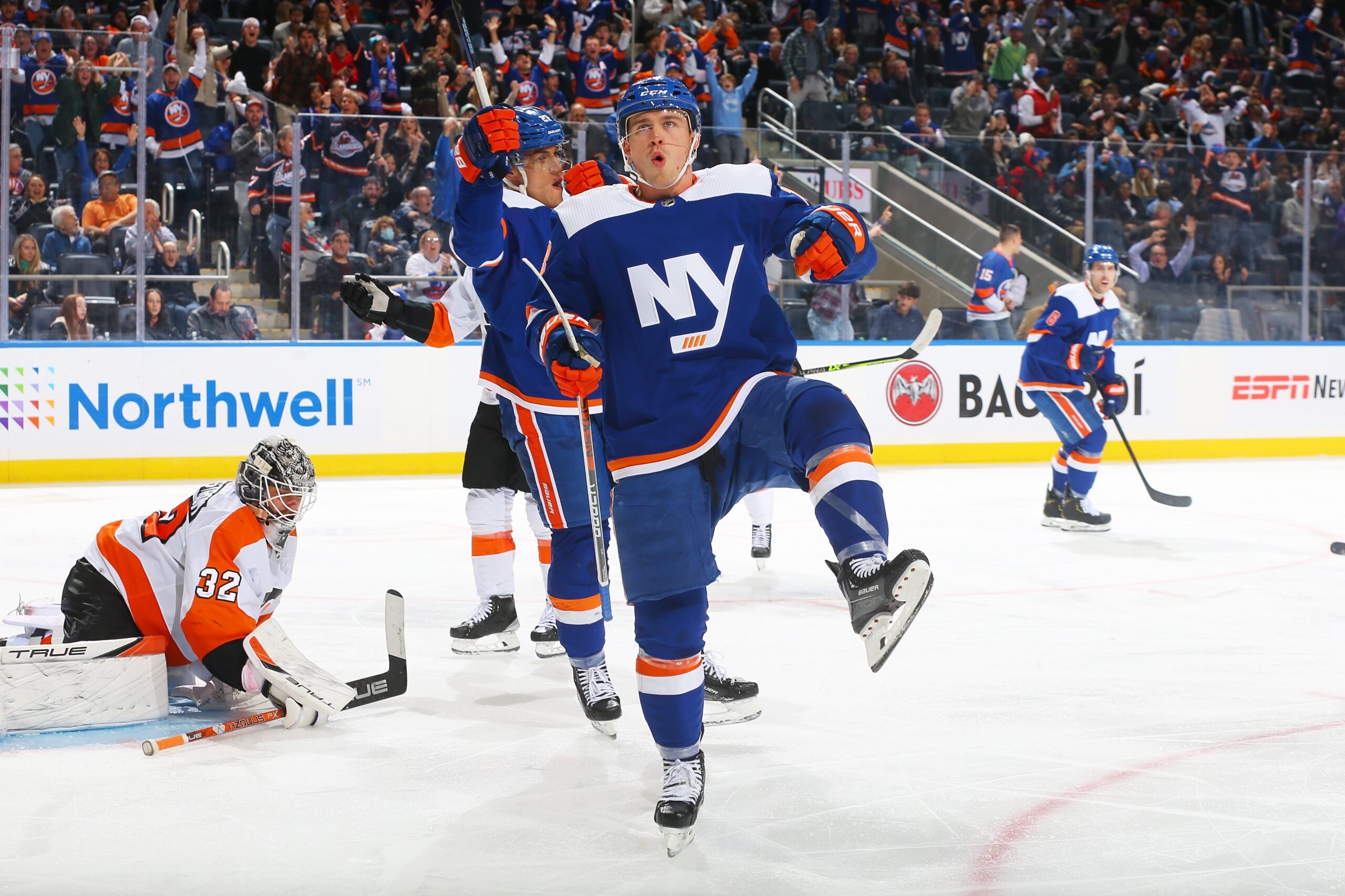 Just when you thought things couldn’t get any worse for the Philadelphia Flyers, they managed to disappoint once again.

Or if you did think things could get worse, then hat’s off to you I suppose.

The Flyers managed to lose another game, this time to the New York Islanders by a score of 5-2. That’s ten losses in a row for Philadelphia, and it’s now the THIRD time in the last year that the Flyers have recorded losing streaks of at least ten games or more.

The first two periods of the game were actually really competitive and the Flyers even held the lead at one point. Then the third period came and in typical Flyers fashion as of late, they keeled over and let their opponent have their way with them as the New York Islanders netted three goals in the final frame to win 5-2 at UBS Arena.

It seemed like a long night would be in store for the Flyers right off the bat as the Islanders took all of four minutes and 33 seconds to break the ice on an Adam Pelech slapshot.

Pelech ripped a great feed from Anthony Beauvillier by Felix Sandström and put New York ahead 1-0 early on in the contest on his third tally of the season.

The Flyers didn’t record the their first shot on goal until almost six minutes into the game and couldn’t seem to generate anything against the Islanders.

That was the case until Lukáš Sedlák scored his first goal since November 8th to tie the game up at 1-1.

Kevin Hayes’ swift centering pass was slammed home by Sedlák, and Ivan Provorov picked up his 200th career NHL point on the play with a secondary assist.

Sedlák’s second goal of the season came with just 4:33 remaining in the period and 1-1 is how the opening twenty minutes would close. New York led the shots on goal battle at 6-4 but couldn’t generate much offense after their early goal, and the Flyers seemingly had a shot to win this one.

The Islanders would take the game’s first penalty just 5:48 into the second period after Oliver Wahlstrom tripped up Kevin Hayes, sending the dreadful Flyers power play onto the ice.

Philadelphia managed just one shot on goal from Provorov during the man advantage and they even gave up a breakaway to Brock Nelson. Nelson forced Provorov to fumble the puck at the Islanders’ blueline and he skated to the other end alone on Felix Sandström, but the Flyers netminder read the play perfectly and shut down Nelson’s backhanded breakaway shot to keep the game tied.

Before the halfway point of the period, and the game, the Flyers managed to take the lead on a Joel Farabee goal after he banged home a Kevin Hayes rebound to make it 2-1 in favor of Philadelphia.

It was Farabee’s fifth marker of the year and his fourth point in the last five games, bringing him to 14 points in 22 games on the season. It also marked Farabee’s 50th career NHL goal, making him the third member of the 2018 draft class to reach that mark alongside Andrei Svechnikov (102) and Brady Tkachuk (98).

Ivan Provorov would take a cross-checking penalty at 14:42 agaisnt Zach Parise, sending the Islanders on their first power play of the night, and Philadelphia’s lead would last just over seven minutes as a result.

A failed Rasmus Ristolainen clear smacked Morgan Frost and stayed in the Flyers’ zone and Ryan Pulock fisher the puck to Parise, who was all alone on Sandström. Ristolainen made a strong effort to help out his goalie, but he couldn’t poke the puck away from Parise and the New York forward buried the backhander to tie the game up.

A crazy one from Parise. pic.twitter.com/heBokQ7MHh

2-2 is how things would wrap up after two periods. Philadelphia showed a much better effort in the middle frame that was evidenced by a 15-8 shots advantage in the period and a 19-14 advantage overall, and they were seemingly so close to earning their first win in almost three weeks.

The Islanders came out of the locker room on an absolute mission and struck first just before the three minute mark on a Brock Nelson snapper to take a 3-2 lead.

Just 21 seconds later, Anthony Beauvillier added on to the misery and rammed home a fantastic pass from Ryan Pulock to make it 4-2 Islanders.

What’s better than one goal highlight??

The Flyers would have a chance to tie things up on the power play with 12:34 to play after Tanner Laczynski was interfered with by Scott Mayfield. Again, the Flyers mustered one measly shot on goal against Semyon Varlamov and New York killed off the penalty with ease.

After a brief Philadelphia flurry near the midpoint of the period, Nicolas Deslauriers was called for cross-checking against Adam Pelech. As was the case on the first Islanders power play, Zach Parise made the Flyers pay again, this time with a severe angle shot that beat Sandström high over the shoulder on the near side to give New York a commanding 5-2 lead.

Less than five minutes after Parise’s second goal of the night and seventh of the season, all hell broke loose after Alexander Romanov laid a hard hit on Hayes.

Flyers don’t like the hit on Hayes, and Deslauriers and DeAngelo drop the gloves 👊🏻 pic.twitter.com/aCkRBCUenC

The fireworks hadn’t settled yet afterwards as Rasmus Ristolainen and Matt Martin were each given matching roughing penalties after a brief scuffle in front of the Flyers’ crease after Felix Sandström covered the puck with 1:03 to play.

The Flyers racked up one final penalty as time expired as Zack MacEwen received a delayed penalty for roughing against Simon Holmström, but it didn’t matter as the New York Islanders laid a third period beatdown on the Philadelphia Flyers to take home a 5-2 victory and send the Flyers to another ten-game losing streak.

The Flyers and Islanders will meet again on Tuesday night as Philadelphia will play host at Wells Fargo Center, trying once again to put an end to their long losing streak and our misery to boot.