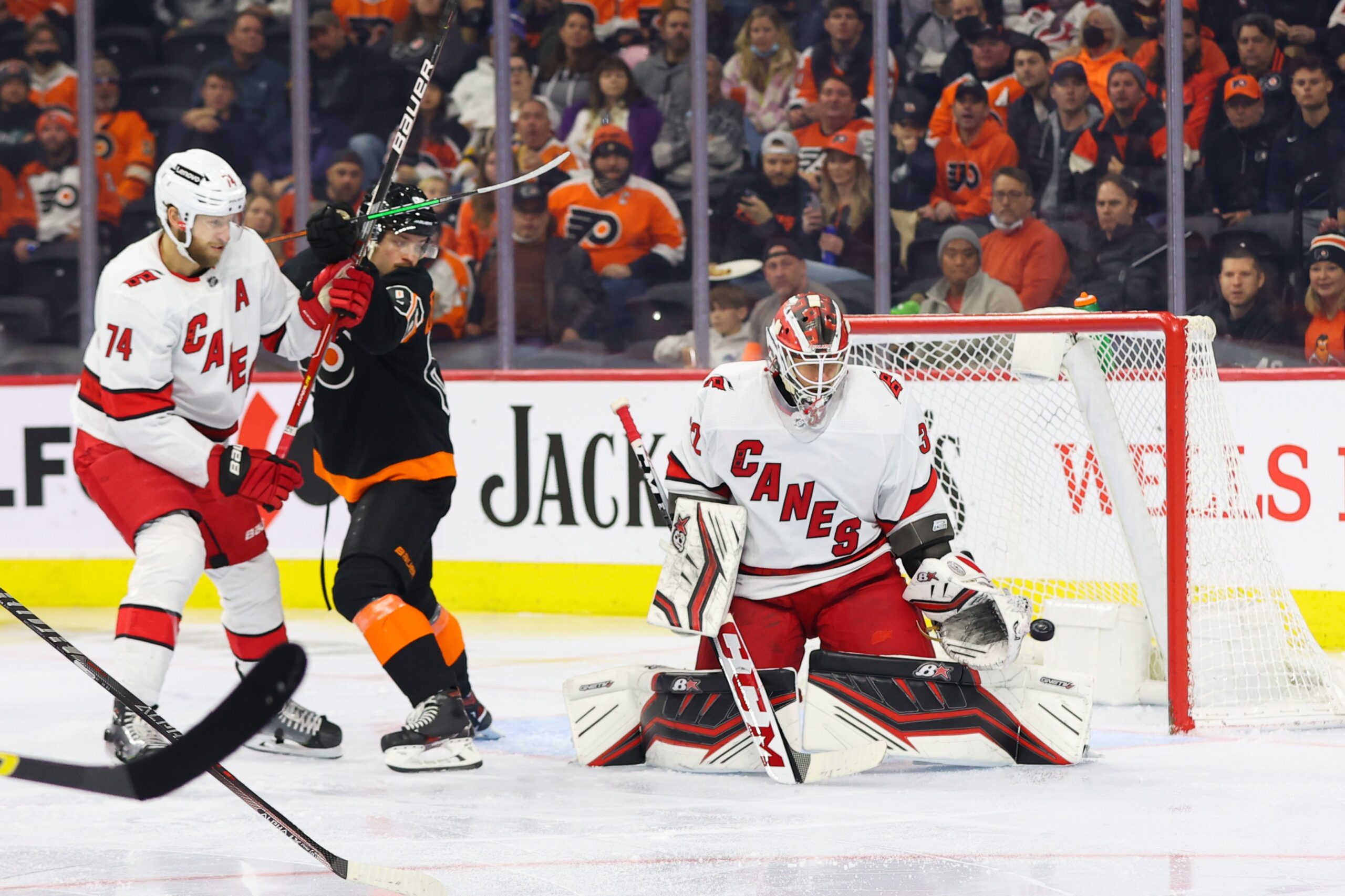 Flyers Fall Flat with a Listless Effort Against the Hurricanes

The Philadelphia Flyers had the dream start they had envisioned against the Carolina Hurricanes, as they opened the scoring 50 seconds in. The Flyers hung on to a 2-1 lead heading into the second period after being outshot 17-6.

However, that was all she wrote for the Flyers as they ended up allowing four unanswered goals and lost this game in deflating fashion, 6-3.

Continuing their stretch of playing the league’s best, the Flyers knew they were going to have their hands full with the Hurricanes, a quick start would be paramount to not only break their offensive woes but to also take down of the league’s best teams.

That is exactly what they did when Ivan Provorov scored the game’s first goal 50 seconds in. Off an offensive zone face-off win, the Flyers were brilliantly battling along the boards. Brady Skjei eventually found the puck but turned it over to Provorov on a failed clearance attempt.

Provorov threw the puck back around the boards to Claude Giroux, who protected the puck on the wrap around, passed it towards the net where there was a streaking Sean Couturier. He instead found Provorov on the short side who snapped it past an unaware Antti Raanta. The goal was reviewed for goaltender interference but it was deemed that Couturier was pushed in by Jordan Staal. The Flyers got a power play out of it because of the failed coach’s challenge but couldn’t do much with it and continued their torrid stretch on the man advantage of 5 for 49.

The Hurricanes picked up the pace right after the penalty kill and took full control of the period in terms of chances, attempts, and shots on goal. The Flyers took the first 4 shots of the game but wound up trailing that category 17-6 by the end of the first. The newly formed top line for the Hurricanes was buzzing every shift and they were able to the tie the game at 1.

Provorov lost the puck in his skates in the corner to Teuvo Tervainen, Scott Laughton recovered it but turned it over trying to clear it to Sebastian Aho. It bounced of Aho’s skate to Teravainen’s tape who then dropped the puck back to Aho as he ripped a snap shot past an unaware Carter Hart, who was slightly screened by Provorov.

The relentless forechecking continued and pressure started to mount and the Hurricanes forced the Flyers to take an ill advised delay of game penalty, courtesy of Justin Braun.

After Carter Hart kept the game tied with several big stops on the penalty kill, Cam Atkinson’s aggressiveness forced a turnover and allowed Joel Farabee to steal the puck and head out on a one on one rush with Seth Jarvis. Farabee dangled past the rookie and ripped a snapshot through the five-hole of Raanta to give the Flyers an opportunistic 2-1 lead.

The second period wound up being a turnover frenzy from the Flyers and it wound up costing them time and time again. 23 seconds into the period, Aho continued his torment against the Orange and Black by blasting a seed past Hart’s glove from the blue line. It started off a turnover from Oskar Lindblom nears the benches after he couldn’t properly handle a Travis Sanheim pass off the boards.

The Flyers countered that goal with one of their own from Rasmus Ristolainen 53 seconds later. The hulking defender scored his first as a Flyer after he was given all the time in the world from the point. Hard work by Atkinson and a great pass from Morgan Frost afforded Ristolainen all the time he needed to aim, lift, and fire a slapshot past the glove of Raanta.

41 seconds later, the Hurricanes came back to tie the game from a goal by Jesper Fast. This one was caused by an ill-advised turnover from Nate Thompson, who threw the puck into the middle of the ice to no one but Ian Cole. His slap shot was initially stopped by Hart, and the rebound by Nino Niederreiter was stopped as well. The third time is the charm however, as Fast was able to collect the rebound and get it past a flailing Hart.

Less than 4 minutes later the Hurricanes took their first lead of the game, Jesperi Kotkaniemi scored his first goal in 11 games.

After the referees missed a blatant knee on knee incident from Andrei Svechnikov on Scott Laughton, the Hurricanes came roaring back into the zone with some pretty passing that left the defense in a whirlwind and Hart was left all alone to fend off a tic-tac-toe from Kotkaniemi to Svechnikov to Tony DeAngelo to Jarvis, and finally back to Kotkaniemi.

On what seemed like a simple zone entry for the Hurricanes turned into yet another goal where Carter Hart was left all alone to fend for himself. All five Flyers defenders were on one side of the ice, seemingly cluing in to the puck handler, without realizing a Hurricane was going off to the bench for a change. DeAngelo noticed that, stopped in his tracks, fired a pass to a wide open Steven Lorentz who was able to walk in Scott-free and deke the goaltender for an easy goal.

The Flyers got thoroughly outmatched yet again during the second period and couldn’t muster up many opportunities, let alone puck possession. Their best opportunity came off a turnover from Nate Thompson who found Zack MacEwen and Connor Bunnaman on an odd man rush. Bunnaman was robbed by a sliding Raanta but a little perplexing that their best opportunity had to come off another transition play and from the fourth line.

Svechnikov was the next Hurricane to break out of their scoring slump as the 6th goal broke his 11-game goalless streak in the third period. The play that led to the goal was broken from the onset as it started with a blocked shot by Provorov that left him lame and in pain.

With the Canes circling and pressuring even more, the puck got slapped into the corner for Justin Braun to possess. However, he got pickpocketed by Svechnikov, who found himself unimpeded in the slot and does what he does best and ripped a snap shot past Hart.

The Flyers had a few chances to climb back into the game including a power play and an open net for Sanheim but it was too little too late at that point.

The Flyers got outmatched yet again and Carter Hart had a monster first period stopping 16 of 17 shots as the Flyers had a 2-1 lead going into the second. However, the wheels came off and the Hurricanes continued their relentless pressure but this time they were able to score on their chances.

The power play had their chances to add onto the lead or bring them back into the game but it has done more damage than good lately as their slump has reached 5 for their last 51 attempts. Turnovers were another reason as to why they lost this game as 5 of the 6 Hurricane goals came off a Flyer giveaway. The Flyers could barely control the puck, have any offensive zone pressure, or create scoring chances. Their dump and chase efforts just end up on a defender’s stick and out the zone.

The Flyers next game comes against the New Jersey Devils on the road on Sunday in the first Battle of the Turnpike this season. Hopefully they can turn things around soon before the season really gets away from them in the midst of this losing streak.

Flyers Looking to Turn the Tide Against Division Leading Hurricanes
Are the Flyers in Must Win Mode Already Against New Jersey?