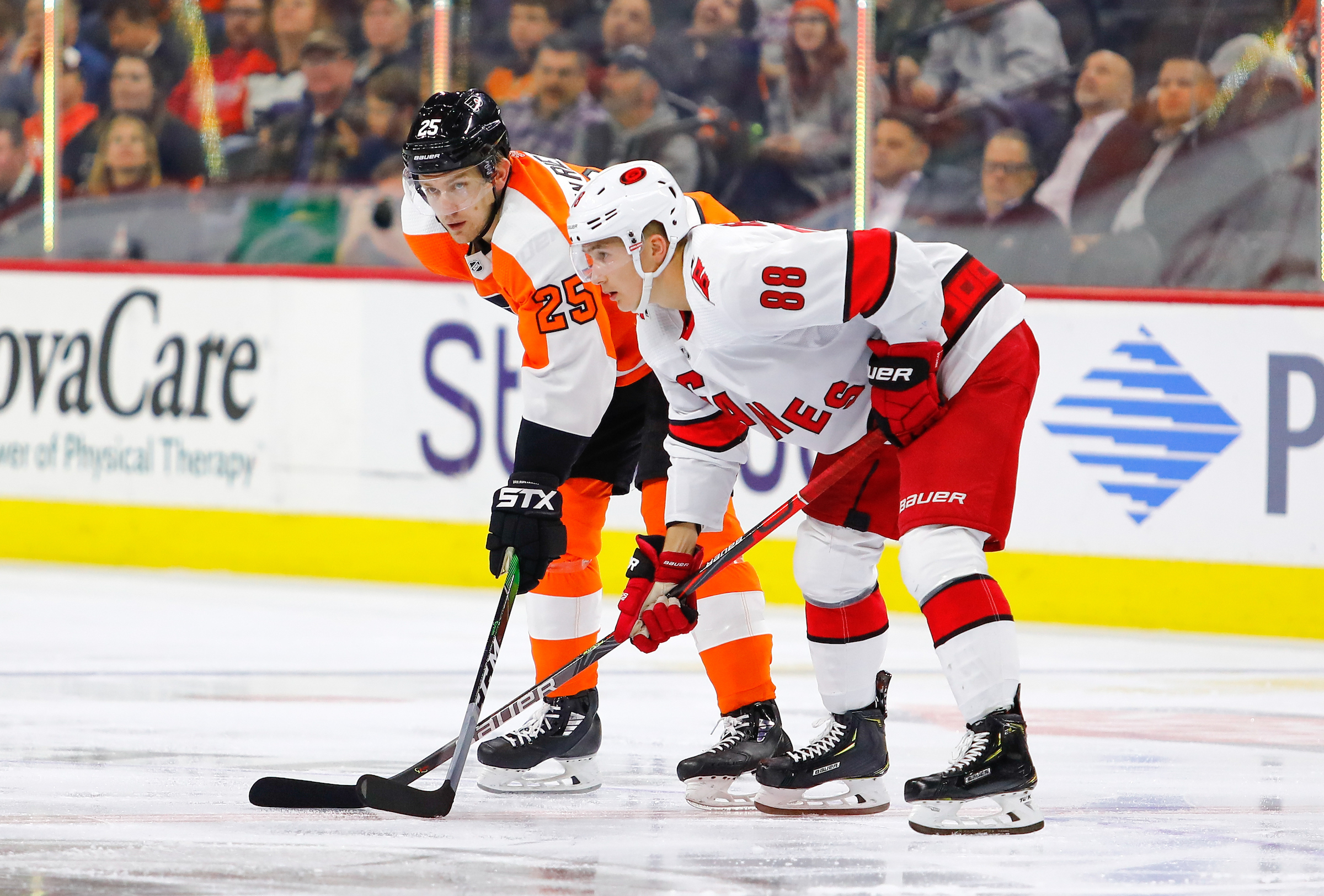 Flyers Looking to Turn the Tide Against Division Leading Hurricanes

It’s starting to sound like a broken record but the offensively anemic Philadelphia Flyers (8-6-4) continue their toughest stretch of the season as the Carolina Hurricanes (14-3-1) come to town today on Black Friday. This will be their third game in four days and continues a stretch of six games in nine nights.

The Flyers are coming off back-to-back losses against the Tampa Bay Lightning (4-0) and the Florida Panthers (2-1 OTL) on consecutive nights. It was never going to be easy considering the Lightning were unbeaten in regulation in their last eight games and the Panthers were tied for first in the NHL. Now they face the Hurricanes, who are second in the NHL only to the Flyers’ most recent opponent in the Panthers.

They were thoroughly outplayed by the Lightning even though they seemingly fired 34 shots on goal. The Panthers were relentless all game as well and had it not been for some magnificent goaltending from Martin Jones, the game and score would’ve been out of reach well before the third period.

Something has to give because at this point the offensive woes have gone from “it’s too early in the season” to a stretch of well over a month of hockey averaging less than 2 goals per game. They have scored 28 goals in their last 15 games and 18 in their last 11.

Injuries have played their part this season with Kevin Hayes missing all but two games, Ryan Ellis only dressing for four games, and now Derick Brassard on the mend, but some of the teams they’ve faced have had injury woes themselves, some of them far more serious than the Flyers. The Pittsburgh Penguins were without Sidney Crosby, Evgeni Malkin, Bryan Rust, and even head coach Mike Sullivan. The Washington Capitals were without Anthony Mantha, Nicklas Backstrom, and TJ Oshie, and most recently the Tampa Bay Lightning were without Nikita Kucherov, Brayden Point, and Erik Cernak, while the Panthers were without Aleksander Barkov.

With Brassard missing last game and being day-to-day for now, the Flyers were forced into calling up Morgan Frost. He played a very good game all things considered and allowed the Flyers to roll with their best top-six to date this season. Claude Giroux, Sean Couturier, and Travis Konecny were reunited and they combined for 19 shots. Frost was slotted in between Joel Farabee and Cam Atkinson.

A GLANCE AT THE CANES

Carolina comes into Philadelphia off the heels of back-to-back losses to the San Jose Sharks (2-1 OTL) and the Seattle Kraken (2-1). Prior to these losses, they had won 4 straight against the St. Louis Blues (3-2), Vegas Golden Knights (4-2), Anaheim Ducks (2-1), and Los Angeles Kings (5-4), with the previous 3 coming on the road. They are about to finish off their 6-game road trip before heading back home to face the Washington Capitals.

The Hurricanes boast a deep and balanced offense as Andrei Svechnikov leads the team with 19 points, Sebastian Aho has 8 goals and 18 points, and Tony DeAngelo has 17 points. Teuvo Teravainen and Vincent Trocheck also have 13 points, and even Martin Necas has 10 points.

These two teams last scared off 2 weeks ago in Raleigh, where Carter Hart’s 40-save performance stole the show as the Flyers came out on top 2-1. They received goals from Joel Farabee and Zack MacEwen. Since then the Hurricanes have gone 4-1-1 and the Flyers 1-3-2.

The Flyers power play continues to be a sore spot for the team as they are ranked 26th in the league with a measly 14.5% success rate, while their penalty kill has been improving steadily as they sit 13th in the NHL at a 82.8%. The Hurricanes pose a dangerous threat in terms of special teams because their power play is 9th ranked at 21.7% and they are killing penalties at a 87.3% success rate, which is 4th best.

It’s going to be another tight game for the Flyers as their schedule only gets more difficult. They were able to hang in there for one point against the Panthers but their offensive struggles have reached levels we haven’t seen in a long time. Everyone on the team is struggling to score at the same time and spectacular goaltending and good defense can’t always save you, as we witnessed on Wednesday night.

Not much has been brought to light in regards to Derick Brassard’s injury but the Flyers will be without Kevin Hayes, Ryan Ellis, and Patrick Brown on top of all of that. Connor Bunnaman was also recalled to give Philadelphia more center depth. Max Willman was loaned to AHL Lehigh Valley in a corresponding move. The Hurricanes are a relatively healthy bunch as they are only missing Jake Gardiner and Ethan Bear. Carter Hart and Frederik Andersen are both in line to start in the matinee.