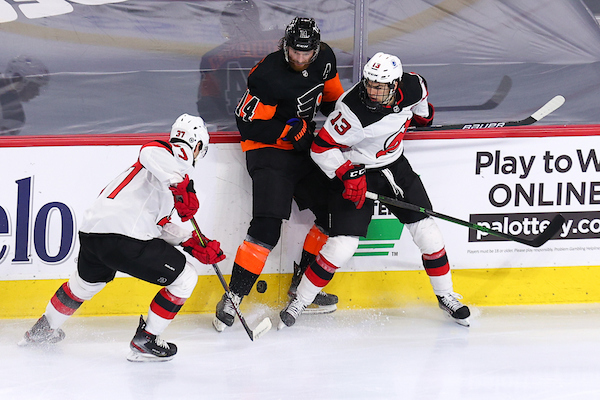 Are the Flyers in Must Win Mode Already Against New Jersey?

The Philadelphia Flyers are a dumpster fire. After going 6-2-2 through the first 10 games this season, including a ton of scoring and some very impressive wins, but the Flyers now sit at 8-7-4 with no offense to be found.

Now, I understand the schedule has been tough, but the shocking lack of offense has been a severe issue that needs to be addressed immediately if this team wants any chance of climbing back up the standings.

That climb hopefully begins when the Flyers head to New Jersey to take on the Devils. The Devils are currently tied with the Flyers in points at 20 and have an 8-6-4 record. While those certainly are not impressive numbers, the Devils have played a large majority of this young season without their star forward in Jack Hughes, who dislocated his left shoulder in the second game of the season against the Seattle Kraken on October 19th. While Hughes is nearing return, he will not be available against the Flyers. In Hughes’ absence, the Devils’ production has come from a variety of players.

Left wing Jesper Bratt currently leads the team in points with 14 (4G, 10A), while center Pavel Zacha leads the team in goal scoring with 8 goals (12 total points). Production has also come from left wing Andreas Johnsson and center Dawson Mercer, both with 13 points. Notable names such as Tomas Tatar and P.K. Subban both have 9 points this season, while newly acquired Dougie Hamilton sits just above them with 10.

The Devils, much like the Flyers, have been seriously struggling lately. The Devils enter this game 1-3-2 in their last 6 and will be desperate for a win at home to get their season going again. Just like the Flyers, the Devils have also had a lot of issues putting the puck in the net, with just one game over 3 goals in the last 6. For comparison, the Flyers are 1-4-1 in their last 6 and do not have a single game scoring more than 3 goals in that stretch.

Two points in this game would be a massive momentum builder for either of these teams. Since both teams are currently struggling to light the lamp, scoring early is a massive key for victory in this game.

While I know it is very optimistic, my prediction is a 4-2 Flyers victory. Winning divisional games on the road is something playoff teams do, and I still have faith this Flyers team will be able to right the ship and improve going forward.