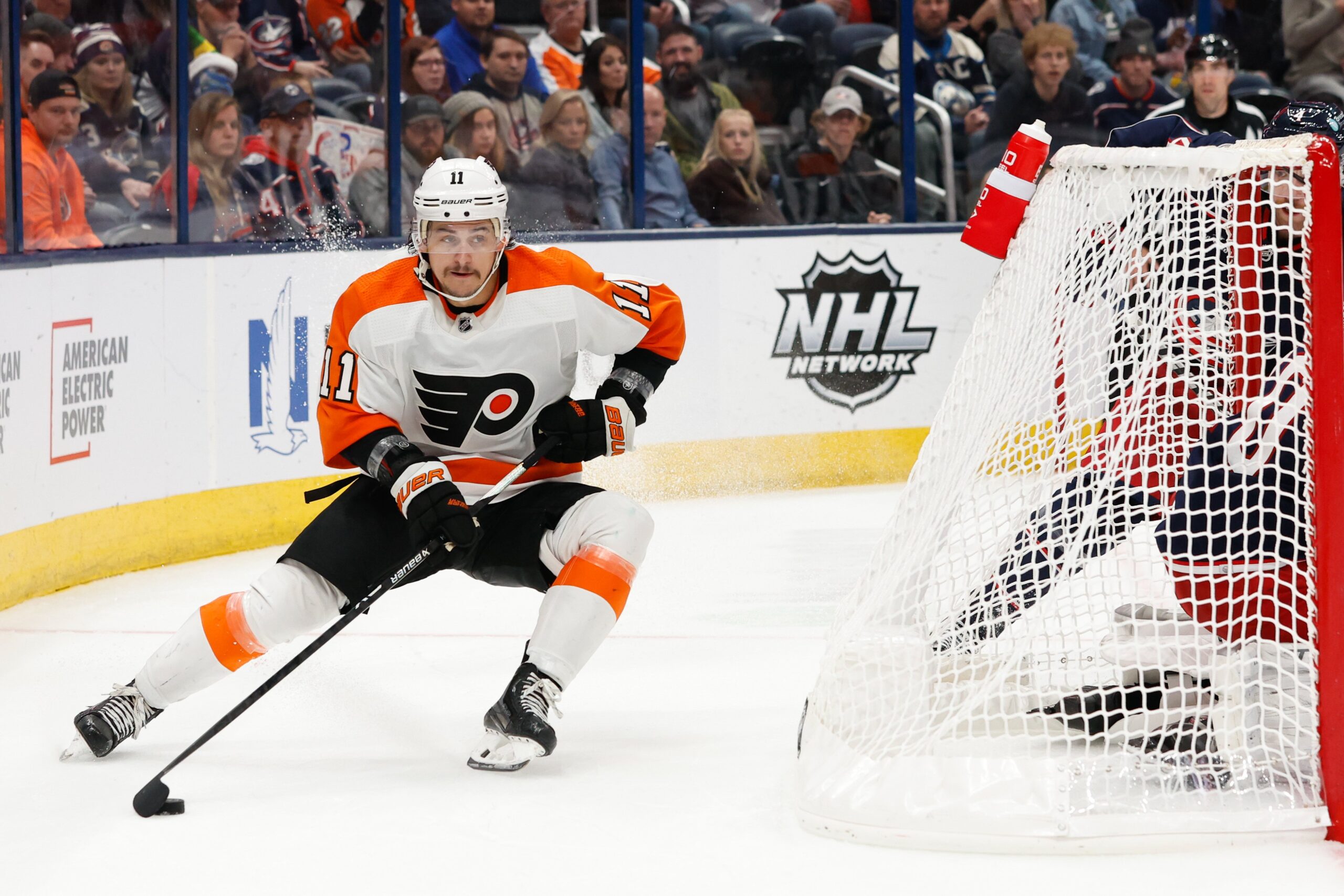 The Philadelphia Flyers fought back while trailing by two goals twice, but they weren’t able to complete the comeback as they fell in disappointing fashion in overtime to the Columbus Blue Jackets.

Passive overtime plays and a very inopportune pass from Kevin Hayes led to a 3-on-1 for the Jackets as they finished off the play and took home their second win of the season against the Flyers. Joonas Korpisalo registered the win after replacing the injured Elvis Merzlikins late in the second period, Carter Hart made 28 saves on 33 shots, and Travis Konecny, Noah Cates, and Kevin Hayes each recorded a goal and an assist, but Columbus captain Boone Jenner scored two goals and Vladislav Gavrikov’s two-point effort pushed the Blue Jackets on top en route to a 5-4 victory.

With injuries taking their toll on the Flyers in the form of Wade Allison, the lines were tinkered around once again. Owen Tippett was back on the first line with Kevin Hayes and Travis Konecny, Noah Cates was centering Scott Laughton and Joel Farabee to complete the top-six, Max Willman was making his season debut on the wing with Morgan Frost and Zack MacEwen, and Kieffer Bellows remained in the lineup but on the fourth line with Nicolas Deslauriers and Lukas Sedlak. The defensive pairs remained the same and Carter Hart returned between the pipes with his spectacular .937 SV% and 2.18 GAA.

They were two teams with a laundry list of injured players out of the game for tonight that include Cam Atkinson, Sean Couturier, Wade Allison, and James van Riemsdyk for the Flyers versus Jakub Voracek, Patrik Laine, Zack Werenski, and Adam Boqvist for the Jackets.

So understandably so, the game started off tentatively and slow as the first real test came at the 7 minute mark when Cole Sillinger batted a pass out of the air and then took a shot that Carter Hart got a piece of as it was rolling towards the empty cage before Justin Braun swatted it out of harm’s way.

Seconds later, captain Boone Jenner was robbed point blank by Hart after being perfectly set up for the one-time opportunity by Johnny Gaudreau. The Flyers netminder moved left to right quickly to make the huge pad save keeping the score tied at 0.

The Flyers tried to counter back after Morgan Frost’s strong forechecking batted a pass out of the air that landed on Zack MacEwen’s stick in front of the net but unfortunately the grinder had his back facing the goal so as he tried to get a shot on goal, the defensemen got back in time. However, Max Willman picked up the loose puck in the corner and set up MacEwen, this time for a one-timer in the slot, that was stopped by Elvis Merzlikins.

Ivan Provorov tried to rim the puck around the boards to Owen Tippett in an attempt to deflect the puck out of the zone for the Flyers to complete a line change. Tippett missed the puck but the Flyers continued towards the line change regardless. The Blue Jackets quickly transitioned from neutral zone to offensive zone as Vladislav Gavrikov had a lot of ice to play with as his initial shot was stopped, the rebound went to Sean Kuraly who initially seemed to have wasted a golden opportunity by turning around, but his turnaround shot deflected off of Justin Braun’s stick and past Hart for a 1-0 lead.

The highlight of the first period for the Flyers unfortunately came as a sound bite from head coach John Tortorella who was asked a few questions by Brian Boucher after a commercial break. Questioning what he saw on the play and how the Flyers played on the goal against, Tortorella said “we suck, we haven’t forechecked, we haven’t done anything…as of right now.”

The Flyers lulled themselves to sleep after the goal, which looked like a true backbreaker as they entered the first intermission being outshot 9-7 with 1 shot from the Orange and Black in the final 7 minutes and 0 in the final 5:45.

The Flyers started the second period with their foot on the gas and once again the Willman-Frost-MacEwen line created a dangerous chance but unfortunately for Willman, his wraparound attempt was stopped by Merzlikins point blank. The scoring chances were slowly starting to add up, the physicality was knocked up a few pegs, and in doing so the Flyers were able to draw a power play as Erik Gudbranson was called for an interference minor. A minute and 18 seconds into the man advantage, Owen Tippett was called for an interference minor of his own, negating the remaining 42 seconds of the power play.

The Johnny Gaudreau-Boone Jenner combination that was stopped by Hart in the first period worked to perfection in the second period and on the power play as the captain was able to deflect a pass past a diving Hart. Lukas Sedlak failed to clear the puck as he was knocked down by a Jackets defender and Kent Johnson sent a cross-seam pass to Gaudreau, who then whipped one to the front of the net hoping to hit the stick blade of Jenner. The Blue Jackets’ power play goal came only 28 seconds into their abbreviated man advantage.

ON THE POWER PLAY 🚨🚨 pic.twitter.com/NBUCbsyX39

After the Blue Jackets came in wave after wave, the Flyers replied in the form of a goal of their own from their first line – shocker. Scott Laughton and Travis Konecny battled behind the net for a loose puck, and the latter retrieved it and quickly sent a pass out front to Kevin Hayes, who one-timed a quick shot past an outstretched Merzlikins for his 4th of the season.

Nearly 3 and a half minutes later the Flyers tied the game that started with a defensive zone faceoff win. Owen Tippett – placed on the second line after his penalty – quickly sent a pass towards MacEwen streaking into the offensive zone, who then fake-shot-passed to Noah Cates for a wide open one-time goal.

Merzlikins was somewhat distraught the shift earlier when the Flyers were pressuring as the goaltender landed awkwardly on his knees. He was then replaced for Joonas Korpisalo after Cates’ 3rd goal of the season tied things up at 2.

Not too long after that, Hayes created a turnover at the blue line, kept the puck in the zone, and set up Travis Konecny for a chance in the slot but he instead went for a wraparound attempt with Korpisalo leaning and was robbed by the pad as the Finnish netminder somehow got back in time to keep the Flyers from taking a 3-2 lead.

The Flyers kept peppering away at Korpisalo as he stopped all 7 shots he faced in the final 6 minutes of the second period. The Flyers also outshot the Blue Jackets 17-8 in the second frame, while also attempting nearly 30 shots. There was a clear difference between their first and second periods and you know Tortorella didn’t mince his words during the first intermission as he got the best out of his group.

However, in the final few minutes the Blue Jackets caught the Flyers snoozing a little as Johnny Gaudreau was able to waltz into the zone, make whatever move he saw fit, and left the ice after a lengthy shift that created four scoring chances in the final minute. The Blue Jackets were stopped by Carter Hart at the end but it was not the way the Flyers wanted to end the period after playing a scintillating 18 minutes.

After winning the faceoff in the offensive zone, Travis Sanheim dropped a pass to Konecny whose shot was blocked by Boone Jenner, who then chased the puck down the ice for a breakaway goal past Hart, who committed way too early.

Boone with the breakaway 😁 pic.twitter.com/aySgjFaLso

Then 13 seconds later Eric Robinson doubled the Blue Jackets’ lead after they won the faceoff, dumped and chased, won a board battle, sent it to the point, and finished off the play past a bewildered Hart as the start of the third period completely favoured Columbus.

A goal for our guy Robby 🤗 pic.twitter.com/8YvkG5Rj3Y

1:23 later the Flyers then circled the Blue Jackets like vultures and were able to cut the deficit to one off the stick of Nick Seeler, whose point shot was able to find its way past Korpisalo with a lot of traffic in front.

Andrew Peeke then blocked a shot that hit the inside of his leg and with another Blue Jacket down – Jake Bean, Merzlikins, and now Peeke after Zack Werenski, Erik Gudbranson, and Nick Blankenburg got injured in their first matchup – the Flyers went to work in the offensive zone as they responded quickly to the two goal outburst from Columbus. Joel Farabee and Morgan Frost each recorded an assist.

With the Flyers desperately in need of a goal to tie the game were given a power play after Brendan Gaunce was called for a slashing minor with 11:19 remaining in regulation. And tie it they did as Travis Konecny slammed home the rebound 32 seconds into the power play.

Kevin Hayes entered the zone swiftly, played a little give-and-go with Noah Cates, whose initial shot was stopped by the shoulder of Korpisalo, but the rebound was too loose and it allowed Konecny to gain control and find daylight as he registered his second point of the game – as did Cates and Hayes – while scoring his 6th of the season.

After consecutive icings, the Blue Jackets pinned the tired Flyers players on the ice and were able to whisk whatever plays they saw fit but Emil Bemstrom was robbed twice by Carter Hart, once with the blocker and another with the glove with a shade under two minutes remaining. After regulation, the game was tied at 4, the Flyers had a 37-30 shot advantage and  out-attempted the Jackets 74-52, while Columbus outhit the Flyers 34-27.

The Flyers just don’t seem to understand overtime that well as they looked awful and passive. They were holding the puck for far too long, staying on the outside, and taking the puck out of the zone to regroup just to complete the cycle again.

Kevin Hayes tried slamming a pass to Konecny in the high slot but it was blocked off by the Blue Jackets who then set off on a 3-on-1 with Konecny and DeAngelo playing too deep in the offensive zone. Gavrikov finished off a great passing clinic from Yegor Chinakhov and Cole Sillinger as they got it past an outstretched Hart to take the game 5-4 in overtime.

one more time around for the OT winner🤙 pic.twitter.com/co4vXJ3uIl

The Flyers will continue their road trip and take on the league-leading Boston Bruins at TD Garden on Thursday night at 7:00pm ET.