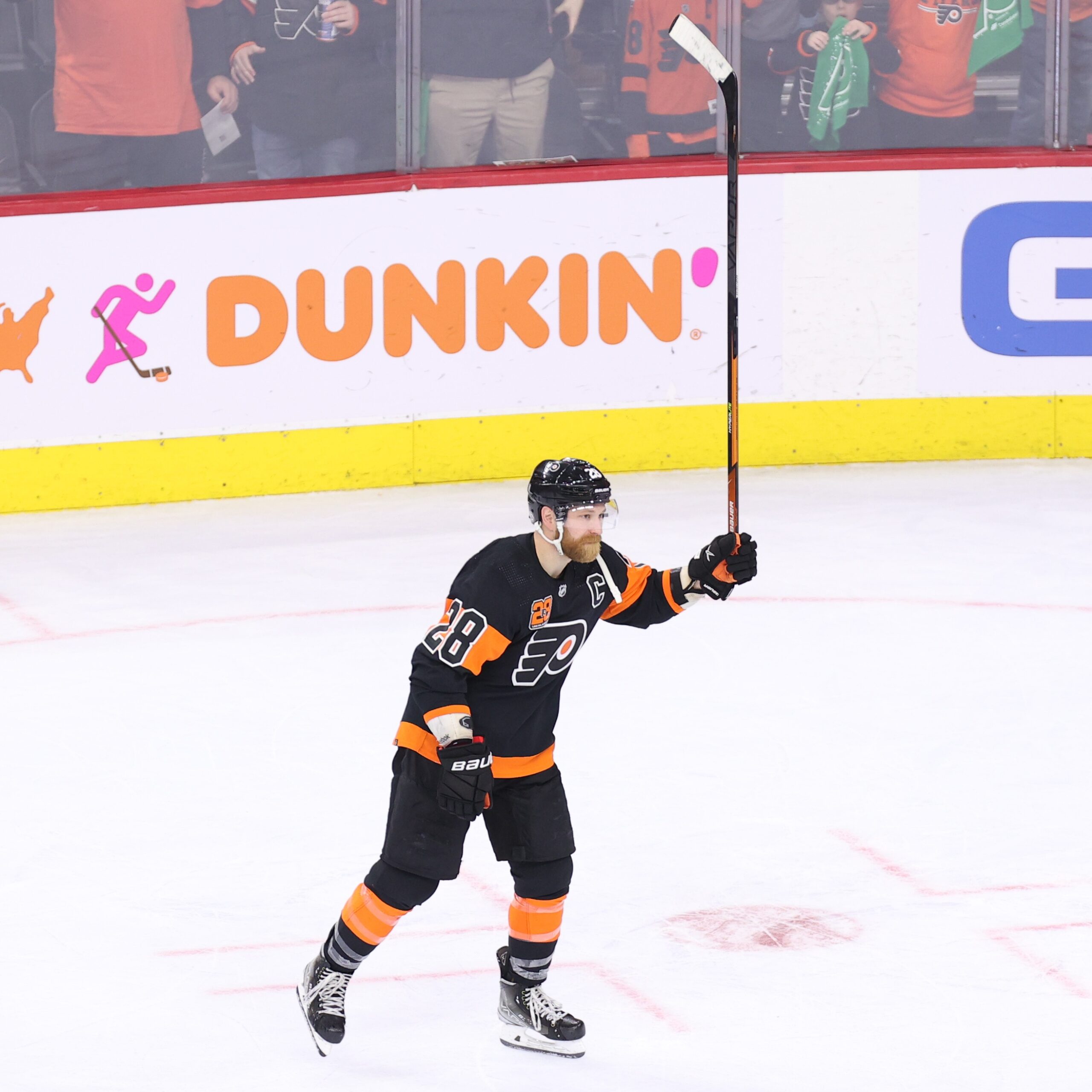 Claude Giroux’s 1000th game has come and gone and the Philadelphia Flyers were able to pull off a huge comeback win for their captain. Down 4-3 with less than 5 minutes remaining in regulation, Kevin Hayes and Joel Farabee scored the game-tying and game winning goals within 3 minutes to seal the win in front of a raucous crowd at the Wells Fargo Center.

It was an emotional night for everyone involved but of course none other than the captain and his family. They were awarded several gifts and a nice ceremony with a video montage before puck-drop. Custom artwork was given to the captain, a replica was given to all fans in attendance, the players wore t-shirts, sweaters, and pre-game jerseys in honour of Giroux, and the game jersey had a patch for his 1000th game.

It was a terrific swan-song in the event that this was his final game in the Orange and Black. The trade deadline being only a few days away, the biggest name from the on-set has been Claude Giroux and that has only intensified as his 1000th game was approaching and several other trade-candidates were taken off the board (Joe Pavelski and Tomas Hertl among others).

With the Flyers playing in a back-to-back situation, it worked out that the first game was the milestone and that it was held in Philadelphia. The team travelled to Ottawa after the game as they are set to face-off against the Senators tonight; one absentee from that flight was Claude Giroux. If he didn’t need to hit the milestone or if he had reached it before tonight’s game, he could’ve been traded already. It was important for the player and the team that he reached the 1000th game and understandably so.

Now that he has, the trade rumours have almost instantly taken off with 4 teams being at the top of the list: Colorado Avalanche, Florida Panthers, Boston Bruins, and New York Rangers. It is believed, per a report from Crossing Broad’s Anthony SanFilippo, that Giroux has already nixed trade offers from the Bruins and the Rangers and that the Panthers and Avalanche seem to be in a head-to-head battle for his services. Not all too surprising that he didn’t want to accept an offer from the Bruins or Rangers, especially when Stanley Cup contending teams like Colorado and Florida are in the mix. That’s not to say the Bruins or Rangers don’t have a shot to win Lord Stanley but they aren’t in the same tier as the aforementioned two franchises.

Colorado has already made some moves this week as they acquired Josh Manson and Nico Sturm. With the news that captain Gabriel Landeskog would miss the remainder of the season, the Avalanche will be placing him on the LTIR, which will open up $7 million dollars. They did acquire Josh Manson from the Anaheim Ducks for Drew Helleson and a second round pick in 2023. It’s important for 2 reasons: 1) the Avalanche got the Ducks to retain half of Manson’s $4.1 million AAV, and 2) Helleson was someone the Flyers were interested in and scouting heavily. The Avalanche then traded Tyson Jost to the Minnesota Wild for Nico Sturm in a move that opened up some much-needed cap room. Jost was also someone the Flyers were reportedly involved with.

The template for a Giroux deal that Chuck Fletcher made clear was a first round pick, a player, and a prospect. This opens the door for the Flyers to possibly acquire a better prospect than one that was being made available. Owen Tippett was made a healthy scratch just before his game in the AHL tonight and there are rumours out there swirling that the Flyers are keen on also having Mackie Samoskevich included in the deal.

Elliotte Friedman tweeted earlier Thursday that the Colorado Avalanche have presented the Flyers with the better offer between the two teams but Giroux’s preference remains Florida. Chuck Fletcher is trying to use that as a bargaining chip with the Panthers as he wants more included in a deal that already reportedly involves Tippett and Samoskevich. For more to be added in the deal, more salary retention will be involved as the Flyers are trying to get the Panthers to replicate the Avalanche’s offer.

With Giroux not travelling and the Flyers playing twice more before the trade deadline, there’s a very good possibility that the captain will be dealt within the next 24-48 hours. The Panthers have been making the biggest push of late, their name is all over Giroux, and even though both teams have traded away pieces the Flyers were coveting, it seems that Florida currently has the slight edge. Now nothing is certain and nothing is in place just yet but for the time being, but Florida and Colorado are locked in as the favourites and it only helps their cause with Giroux having the final say.

The Florida Panthers are Quickly Emerging as Favourites to Land Claude Giroux
In a poorly kept secret, the Flyers could be exploring moving James van Riemsdyk