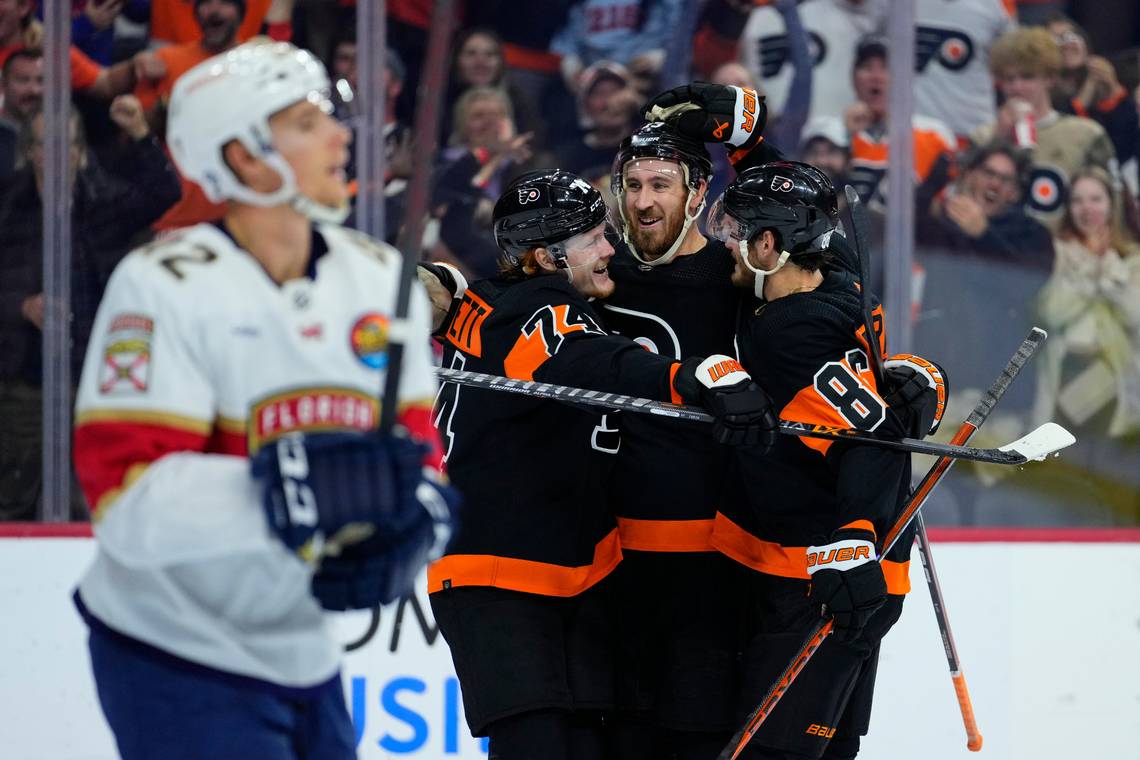 In the first installment of their Throwback Thursdays, the Philadelphia Flyers escaped with the victory against the Florida Panthers by a score of 4-3.

Carter Hart has been the story so far as he now improves his record to 5-0-0 on the season, but this was definitely his best showing as he set his career-high in saves in a game with 48 as the Panthers fired 51 towards the young netminder. Hart stopped 30 of his last 31 shots in the last 40 minutes, the Flyers got goals from Tony DeAngelo, Scott Laughton, Zack MacEwen, and Joel Farabee, with the go-ahead goal and then the eventual game-winner coming within 72 seconds in the middle frame as the Flyers now stand with a 5-2-0 record after 7 games.

In the second game of their 3-game homestand, the Flyers welcomed back Rasmus Ristolainen and Owen Tippett to the lineup as they came in to replace James van Riemsdyk (broken finger) and Tanner Laczynski (personal matter) as the Flyers rolled out with 11 forwards and 7 defensemen.

The Florida Panthers came into this game with one thought in mind and that was to fire the puck on goal from any angle and from anywhere on the ice. It started from the moment the puck dropped and it transitioned into their first goal of the game.

The Panthers broke the deadlock off the stick of Gustav Forsling that Carter Hart would definitely want to have back. Hart, who entered this game with a 4-0-0 record and peripherals of a .949 SV% and 1.75 GAA, has had a knack for allowing the softer goals and making the grander saves as Forsling’s goal falls in the former rather than the latter. Forsling’s shot came from the point with a few bodies in front as it squeaked through his arm and rolled into the net.

In the game following their benching in the third period on Sunday, members of the top line came clutch to tie the game at one. Joel Farabee won the puck as they entered the offensive zone and passed it to Travis Konecny, who made a behind-the-back feed to Tony DeAngelo who finished off the beautiful passing play with a one-timer past Sergei Bobrovsky.

Only a few minutes later, the Panthers tied the game from another weak goal, this time from Josh Mahura. Radko Gudas’ shot from the point was blockered aside by Carter Hart but Mahura’s shot somehow found its way under his pad and into the net for his second goal of the season – both against the Flyers.

By the midway point of the first period, the Panthers held a 13-3 shot advantage that was culminated by an Egor Zamula turnover right before a commercial break. He lost the puck in the offensive zone as the 4-on-4 had come to a close and as he tried to get back into the position to stop the pass into the slot, he was too late, and the puck got to the stick of Patric Hornqvist coming out of the penalty box but his shot was blockered away by Hart, who had made some big saves up until this point even though he allowed a couple goals he’d love to have back.

John Tortorella, not liking what he was seeing, had a chat with his team at the commercial break, trying to get them going as the Panthers were coming in waves shift after shift. Zamula committed another turnover, this time from behind the net, as he tried to send an outlet pass with a couple Panthers waiting in front of Hart. His pass was deflected and Ryan Lomberg eventually got the puck at the point, took a shot that went off a body in front and hit the goal post. Fortunately, the Flyers were able to survive and found themselves on a power play with 4:53 remaining in the period after Owen Tippett was tripped up by Eetu Luostarinen.

It only took the Flyers 21 seconds to connect on the man advantage and tie the game. DeAngelo had the puck at the point of the umbrella, passed it over to Kevin Hayes who waited, waited, and waited before firing a shot that was blocked by Gudas. The loose puck was corralled by Konecny who passed it off his backhand to Scott Laughton who slammed it home through the five-hole of Bobrovsky on the Flyers’ 4th shot of the period.

The goal represented Laughton’s first career power play goal in his first shift after replacing the injured James van Riemsdyk. The Flyers escaped the onslaught from the Panthers for the first 20 minutes, taking a 2-2 deadlock into the intermission. The Flyers fired the last 5 shots on goal but still trailed 18-9, however they outhit Florida 19-9.

Things didn’t get any easier for Carter Hart to start the second period as he robbed Aleksander Barkov in the slot as the Finnish phenom was looking for his first goal of the season. The Panthers set that up beautifully with Matthew Tkachuk and Carter Verhaeghe doing all the dirty, yet beautiful passing, work but Hart met him at the tip of the blue paint to make the save and freeze the puck.

Hart didn’t stop there as he robbed Verhaeghe this time as the Flyers’ Ivan Provorov was down on the ice after blocking a shot. The Flyers went on an odd-man rush of their own before turning it over for Tkachuk and Verhaeghe to have a chance of their own. Hart slid over to his left and robbed him with the puck hitting his mask. Out of the scrum DeAngelo was called for a roughing minor. The Panthers fired 5 shots on goal while on their man advantage but Carter Hart stood his ground and kept the game tied at 2.

Konecny really looked motivated and confident after his benching from last game as he was noticeable as ever in the first 40 minutes of this game. Not only did he get the primary assist on the first two goals of the game, but he also had a few chances of his own but was either stopped by the goaltender or the shot just missed the net. His best chance came after he was sprung on an abbreviated breakaway, dangled a few Panthers, but had his shot just miss the net.

Right out of the commercial break, as the Flyers telecast was showing Provorov’s blocked shot, the Flyers had taken a 3-2 lead after Nick Seeler’s shot from the point was deflected by Zack MacEwen and confused Bobrovsky who had his glove out.

Then minutes later the Flyers doubled their lead after Joel Farabee got one past Bobrovsky who was in his own net. It was a perfect outlet as DeAngelo passed it to Owen Tippett who then sent a perfect pass to Kevin Hayes – that was onside – who missed on his breakaway chance but followed the loose puck, sent it towards the net, where Farabee finished it off for his second goal in as many games.

Rasmus Ristolainen finally delivered a vintage Risto-hit but was called for an interference minor, allowing the Panthers to quell the Flyers momentum and possibly cut the deficit in half. Fortunately, the Flyers had other plans and executed a near perfect penalty kill with the Panthers not being able to do much of anything except kill two minutes off the clock.

Unfortunately for the Flyers however, they entered a deep lull in the final six minutes of the second period with the Panthers all over them and with 16 seconds left in the middle frame, Lukas Sedlak was called for a hooking minor. They survived the final 6 minutes as they took a 4-2 lead into the third period even though the Panthers had a 30-16 shot advantage on the scoreboard while attempting 60 in total.

36 seconds into the third period, Brandon Montour cut the deficit in half as he was fed by a good pass from Sam Reinhart and tucked it home past a sprawling Hart, and the goal also ended an 0-for-25 drought on the power play for Florida.

Nicolas Deslauriers, who was in everyone’s face in the first 40 minutes headed to the penalty box with Sam Bennett for coincidental minors and on the 4-on-4, the Flyers broke down defensively allowing Gustav Forsling to walk in all alone on Carter Hart. Instead of making a move, he took a shot from the faceoff circle and missed the net.

Only seconds later, Morgan Frost was called for a slashing minor, giving the Panthers an abbreviated 4 on 3 advantage for 28 seconds. On their 37th shot of the game with 15 minutes left in the third period, Forsling’s shot from the point was gloved down by Hart and incidentally ended another penalty kill.

With 11:52 remaining, Colin White was called for a high-sticking minor on Seeler, giving the Flyers another chance on the man advantage after scoring on their first and only opportunity. Unfortunately it took the Flyers 65 seconds just to set up and they only fired one shot that Bobrovsky had to deal with and it was a slap-shot from Tippett that he saw the whole way through.

As the Flyers headed into the final commercial break of regulation time with 4:47 left, the shot attempts were 87-38 for the Panthers with 42-21 of them hitting the opposing goaltenders.

It was a furious final two minutes for the Panthers as they eventually pulled Bobrovsky and within the first 1:21 they fired 7 shots towards the net and Hart had to make some ridiculous saves to keep the score at 4-3. With 39 seconds left, the Flyers iced the puck, but fortunately for them the Panthers called a timeout. The 50th shot of the game was gloved down by Hart to freeze the game with 14 seconds left but it also represented a tie in his career-high in saves with 47.

He would break that with 48 and the Flyers survived the onslaught all because of Carter Hart as without his heroics, there is no way the Flyers get the win, let alone get out of the game with a close score.

The Flyers host the Carolina Hurricanes in Philadelphia on Saturday night in a battle of the top two teams in the Metropolitan Divison.