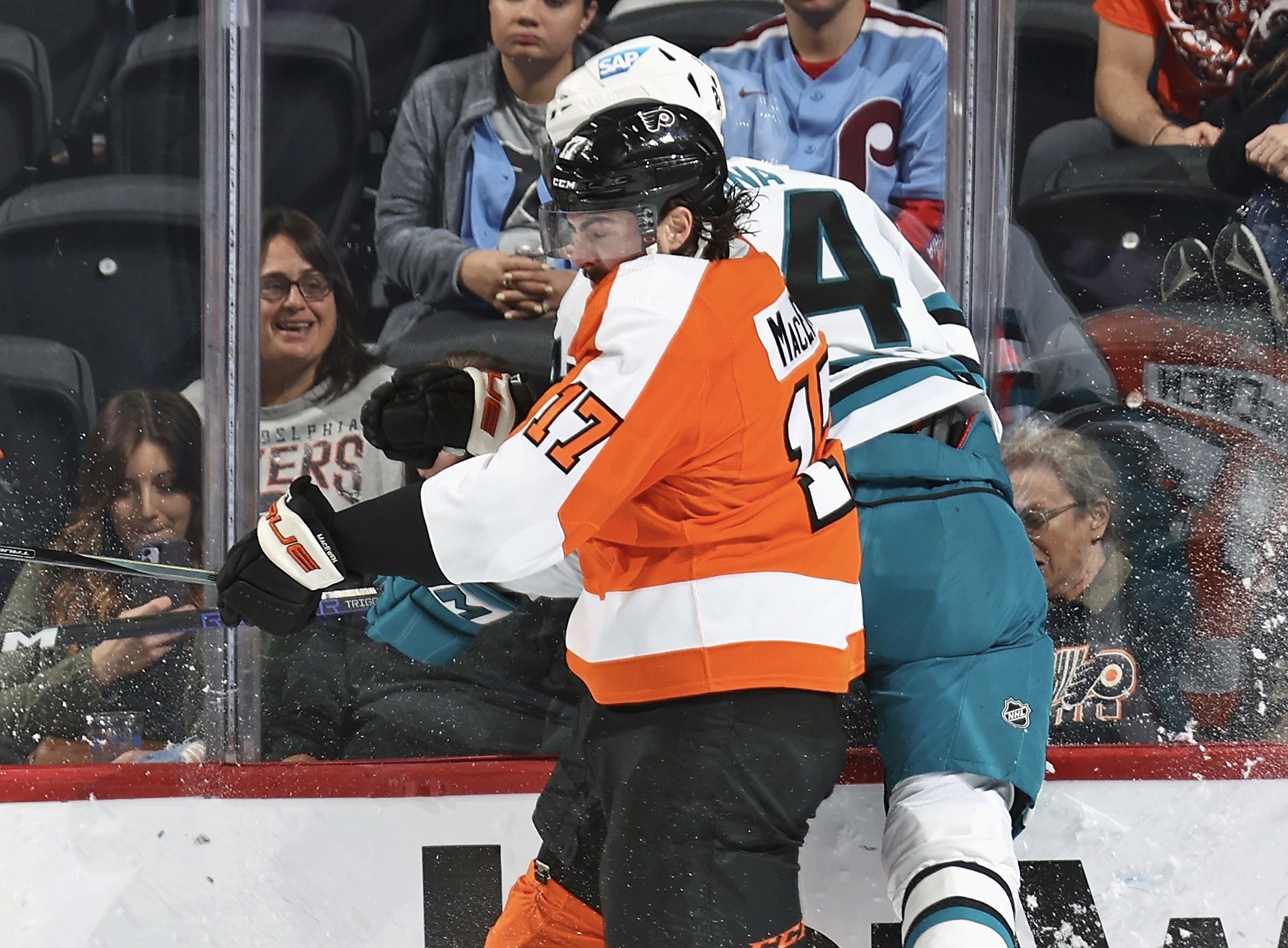 Flyers show no life in 3-0 defeat against Sharks

That was Philadelphia Flyers head coach John Tortorella’s answer when I asked him about how would he assess Felix Sandström’s game after the Swede made 22 saves on 24 San Jose shots in the Flyers’ 3-0 loss to the Sharks on Sunday night at Wells Fargo Center.

While Sandström played fairly well, it’s also a very fair answer by Tortorella after Philadelphia laid a proverbial egg on the ice in this one. A lack of consistent offensive pressure, sloppy turnovers, and poor defensive coverage sunk the Flyers in their first home loss of the season.

It was the Flyers’ fifth time in six games where they were scored on first, but this is the only time we’ve seen them not score in response. While they are second in the league in comeback victories with three, tonight’s game would not be the fourth as the Flyers could not put their foot down and really establish themselves in the game.

The Flyers began right off the hop with a couple key chances and registered the game’s first shot on goal, but San Jose’s James Reimer would fend it off.

The Sharks would respond relatively quickly and shot early and often on Felix Sandström, but the Flyers netminder was up to the task and still in search of his first NHL victory.

As the period reached the halfway mark, the ice started to open up a little more and each team started to create more chances. There seemed to be a little sloppiness with the puck at times on both sides, which is understandable since both teams were coming off the first legs of back-to-backs away from Philadelphia.

The largest ovation during the period didn’t come for a play, but for Oskar Lindblom’s tribute video in his return to Wells Fargo Center. Lindblom, a Flyer for parts of five seasons between 2018 and 2022, was given a standing ovation to which he skated off the Sharks bench and saluted the crowd.

The Flyers seemed to be controlling play more early on, but the Sharks established themselves more and more with each shift and towards the end of the period, San Jose looked to be the better team despite being outshot.

The Flyers’ best chance came with 2:20 left to play when a Travis Konecny pass bounced off a defender and right to a very opportunistic Joel Farabee, who was alone at the doorstep but Reimer read the puck and stopped his one-time attempt.

All in all, it wasn’t a super eventful opening twenty minutes of play. The Flyers held a slight shots on goal advantage at 9-7, but it was still goose eggs on the scoreboard going into the first intermission.

Wade Allison was called for a holding penalty just 4:20 into the second period after he went for a loose puck with Erik Karlsson and the Sharks defenseman took a spill.

With San Jose on their first power play, the Flyers did not sit back and after a great defensive play, Scott Laughton skated in on a mini-breakaway and almost beat Reimer, but he outstretched the left pad to keep Laughton from netting his second shorthanded marker of the year.

Behind a couple great saves from Sandström, Philadelphia was able to finish killing off Allison’s minor and just over a minute after the penalty expired, the Flyers would get a power play of their own after Mario Ferraro was whistled for tripping.

The Flyers seemed to take full advantage of the power play and after a great zone entry, Laughton and Joel Farabee played give-and-go before Farabee buried a pass from Laughton past Reimer, but the goal was washed out after it was determined the play was offside.

San Jose would kill the rest of the penalty off with relative ease, and they parlayed the momentum off their kill into a goal of their own and this one would actually count. Tomáš Hertl spotted Erik Karlsson along the right side and the former Norris Trophy winner sent a bullet past Sandström to give the Sharks a 1-0 lead.

The Sharks continued to control play as the period wore on and as the Flyers continued to squander any chances they had to tie the game up, San Jose found a way to converge and take a two-goal lead.

First goal of the season and first goal as a #SJShark pic.twitter.com/UT8TjWZqyC

Steven Lorentz tipped in a Jaycob Megna wrister from the blueline that surprised Sandström. Lorentz was untouched in front as the Sharks took a late 2-0 lead in the middle frame.

For the first time this season, boos could be heard as the Flyers left the ice. Down 2-0 and being thoroughly outplayed for much of the second period, John Tortorella’s squad would need to make a statement in the third if they wanted a chance to win the game.

Philadelphia definitely came out of the locker room with more energy, and they seemed to fire everything they could at Reimer and the Sharks to begin the final twenty minutes.

The Sharks wouldn’t go away quietly, and Sandström had to remain sharp to keep things within two for the home team. The goaltender kept San Jose at bay when the Flyers couldn’t clear the puck out of the zone or committed egregious turnovers in front of the net.

Luckily for the Sharks, Philadelphia could barely enter the zone, much less set up in it, and the Flyers wasted another opportunity to claw back into the contest. It should be noted that up to this point in the period, Travis Konecny and Kevin Hayes were pretty much stapled to the bench and neither one saw time on the power play.

Time just seemed to dwindle down for Philadelphia, as they couldn’t really set up any high-danger chances or penetrate the San Jose defense at all. A lot of play seemed to stay outside and the Sharks did an astute job of keeping things clean in front of Reimer’s crease and not letting many pucks get to the inside.

The Flyers had a golden chance to get within one with 5:06 to play when Noah Cates had a breakaway and tried to backhand the puck through Reimer’s five-hole, but the San Jose goalie was all over it and smothered the puck between his legs.

After pulling Felix Sandström to get something going with a 6-on-5, the Flyers fell flat again and Nico Sturm buried an empty-netter to all but seal the deal for the Sharks.

The Flyers will have a few days off before welcoming the Florida Panthers to town for a rematch of Wednesday’s crushing 4-3 loss in Sunrise. If tonight’s postgame tone was any indication, Philadelphia should rebound in a big way against a good Panthers club.

Oskar Lindblom makes his return as Sharks visit Flyers
van Riemsdyk Out One Month, Atkinson Remains Out, Ristolainen and Tippett on Verge of Returning