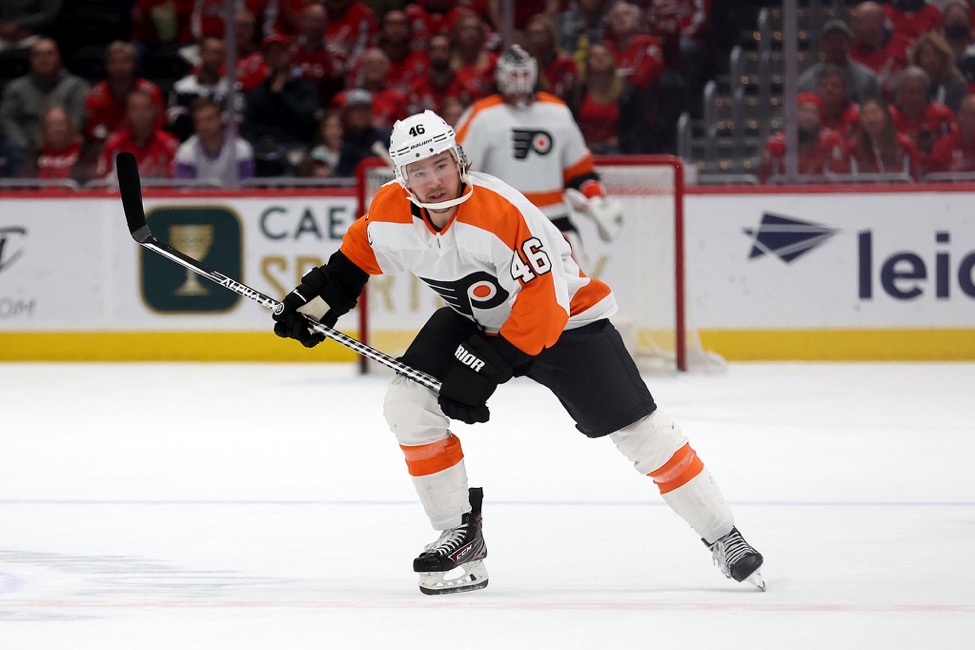 The Philadelphia Flyers were out-matched, out-skilled, and out-manned by the Washington Capitals as they fell 9-2 on the road. Carter Hart and Cam Atkinson left the game after the first period, Joel Farabee and Travis Konecny received 10 minute misconducts in the third period, and eight different Capitals scored a goal and 16 different players recorded at least one point.

The Flyers were out-shot 37-21, and Martin Jones was completely left out to dry when he came in after the first period as defensive breakdowns were the root of all evil tonight. Bobby Brink recorded his first NHL point when he assisted on James van Riemsdyk’s second goal of the game in the third period.

The Washington Capitals came into this one riding high on a three-game winning streak after defeating some of the best teams in the Eastern Conference in Tampa Bay, Pittsburgh, and Boston in a span of five days. Only four points behind the Penguins for the third spot in the Metropolitan Division, tonight’s game against the Flyers was very important for them to keep up with the best of the Metropolitan as they attempt to avoid finishing in a wild-card spot. The Flyers had nothing but pride to play for as well as the NHL debut for Bobby Brink.

The first few minutes of the game had a tentative start as the Flyers created the first scoring chance after a great shift from the fourth line. Nate Thompson’s centering pass to Patrick Brown deflected off a Capital’s skate and into a dangerous part of the ice for Brown to re-direct but Ilya Samsonov just got his pad on it.

Just shy of the seven-minute mark, Cam Atkinson’s offensive zone turnover led to Alex Ovechkin’s 776th career goal. Along the boards, Atkinson tried to backhand a pass into the slot but it was picked off by Evgeny Kuznetsov and he was off to the races. As he entered the Flyers zone, he dropped a pass to Conor Sheary who then passed it to Ovechkin. Ovechkin’s initial shot was deflected by Cam York but stopped by Carter Hart, however he let out a juicy rebound for Ovechkin to pounce on and banked it off the arm of Hart on a pretty bad angle.

Things only got worse for the Flyers as the Capitals started to clog the neutral zone and prevented the Flyers from creating any chances. In doing so, the Capitals spent most of their time in the offensive zone and after a fantastic shot-pass from John Carlson, T.J. Oshie finished off the play by dumping it into the open net and gave the Capitals a 2-0 lead.

36 seconds later, James van Riemsdyk found himself on a breakaway after the puck took a fortuitous bounce off a Capital skate and he finished off the chance by going five-hole after being impeded on his way there.

76 seconds later, the Capitals re-gained their two-goal lead after a beautiful finish from Martin Fehervary as he mimicked van Riemsdyk’s move but in close quarters. Cycling in the offensive zone, Nick Dowd found Fehervary with a backhand pass at the blue-line, then he danced by Ronnie Attard and tucked it through Hart’s five-hole for the Capitals’ third goal in 7:15 minutes. 44 seconds later, Rasmus Ristolainen was called for a hooking minor, giving the Capitals an opportunity to take a stranglehold on the game in the first period. The penalty was killed after Hart made a few saves but he was seen labouring near the end of the kill after stretching his right leg to make a save.

With 2:15 remaining in the first period, Tom Wilson hit Cam Atkinson from behind with the Flyers winger heading straight to the locker room. The 32nd-ranked power play wasn’t able to do much with the opportunity, but Bobby Brink did make a couple smart plays to start the man advantage. Not the best sign when your leading scorer and number one goalie are labouring and in pain after 20 minutes.

As expected, Martin Jones started the second period with Carter Hart being checked out in the locker room, while Cam Atkinson didn’t return as well, and Joel Farabee was seen labouring on the bench before the period even started. Both Hart and Atkinson were quickly ruled out for the game.

After spending well over a minute in the offensive zone, the Flyers cycled well but didn’t fire any shots. Ivan Provorov’s cross-crease pass to Kevin Hayes was well out of his reach and with tired bodies on the ice for the Flyers, the Capitals were easily able to transition from defense to offense. Tom Wilson corralled the pass attempt, sent it out to Anthony Mantha, who then fed Lars Eller for the one-time finish top shelf on Jones.

The fourth goal by the Capitals seemed to really let the air out of the Flyers’ sails as the rest of the second period had a mundane pace to it. Without Atkinson, the forward group looked worse for wear and out-matched against a relatively healthy and dangerous Capitals lineup. By the final commercial break of the period, the shots were 20-12 for Washington but more importantly 10-4 in the second frame.

Coming out of the break, Conor Sheary dangled Jones out of his skates as he was left completely open in the blue paint and finished off the backhand for a 5-1 lead. Both Provorov and Attard left Jones hanging as they aggressively went towards the puck carrier who was at the blue-line. All Evgeny Kuznetsov had to do was get the pass to Sheary, and he did so with relative ease as the unmarked Sheary had all the time in the world to add to the lead.

With the Capitals not letting their foot off the pedal, Matt Irwin added to the Flyers’ misery by blasting a slap-shot past Jones. The puck took a slight deflection off of Attard’s pants, who at that moment in time was a -4 on the night. Only a few minutes later, Eller scored his second goal of the game to give the Capitals an embarrassingly monumental 7-1 lead. The defensive breakdowns continued as the Flyers lost a board battle where they outnumbered the Capitals and then Kevin Connauton pinched at his own blue-line going for the hit rather than the puck. Anthony Mantha was able to get the puck to Eller before Connauton came towards him, and Eller made no mistake as he was left all alone against Jones.

The Capitals just continued to toy with the Flyers as with a delayed penalty on Philadelphia, they were able to get a couple shots on goal and then get the puck out of the zone, allow Samsonov to exit the ice for an extra attacker, re-group and then re-enter the offensive zone wasting more time. Up by six goals, the Capitals brought out Tom Wilson, Anthony Mantha, Marcus Johansson, Alex Ovechkin, and Justin Schultz for their man advantage. After killing the penalty, the Flyers created their best chance since the James van Riemsdyk goal from the first period as Bobby Brink beautifully set up Kevin Hayes with a redirection chance that Samsonov swallowed up.

The nightmare continued with the Capitals scoring their 8th goal of the game after a fantastic tip-in goal by Garnet Hathaway. Justin Schultz’s point shot was going well wide, but Hathaway got his stick in the right place at the right time and deflected it past Martin Jones for his 12th of the season. With 6:17 remaining in the game, Joel Farabee took a very unnecessary penalty as he grabbed and held Trevor van Riemsdyk in the neutral zone. Travis Konecny and Evgeny Kuznetsov mixed things up as well, Farabee was given a cross-checking penalty, a hooking penalty, and a 10 minute misconduct, while Konecny was also given a 10 minute misconduct. The Flyers were unhappy about Ovechkin being on the prior power play for the entire two minutes, which is why the scrum ensued shortly after. Patrick Brown was able to draw a penalty while shorthanded and 20 seconds after the 4 on 4 was made official, T.J. Oshie was called for a minor penalty, giving the Flyers a 4 on 3 power play for 1:40.

With 14 seconds left on the 4 on 3 power play, Kevin Hayes’ one-time shot deflected off of Trevor van Riemsdyk’s skate then off of brother James and in for his second goal of the game and 19th on the season.

Bobby Brink gets his 1st NHL point on the assist! Also the Flyers are losing 9-2 pic.twitter.com/aFP9xSb2xA

Bobby Brink set up the Hayes one-timer as he recorded his first career NHL point. 1:06 later, the Washington Capitals scored on their abbreviated power play opportunity as Johan Larsson deflected home a pass from Justin Schultz as he was able to break towards the net and get behind Rasmus Ristolainen for their ninth goal of the game. Luckily, that’s where the onslaught would finally end.

The Flyers host the New York Rangers on Wednesday night at Wells Fargo Center for the second leg of this back-to-back slate.

The Flyers (and myself) venture to Capital One Arena to play the…team named after a bank?
Flyers hoping for amnesia ahead of Rangers matchup