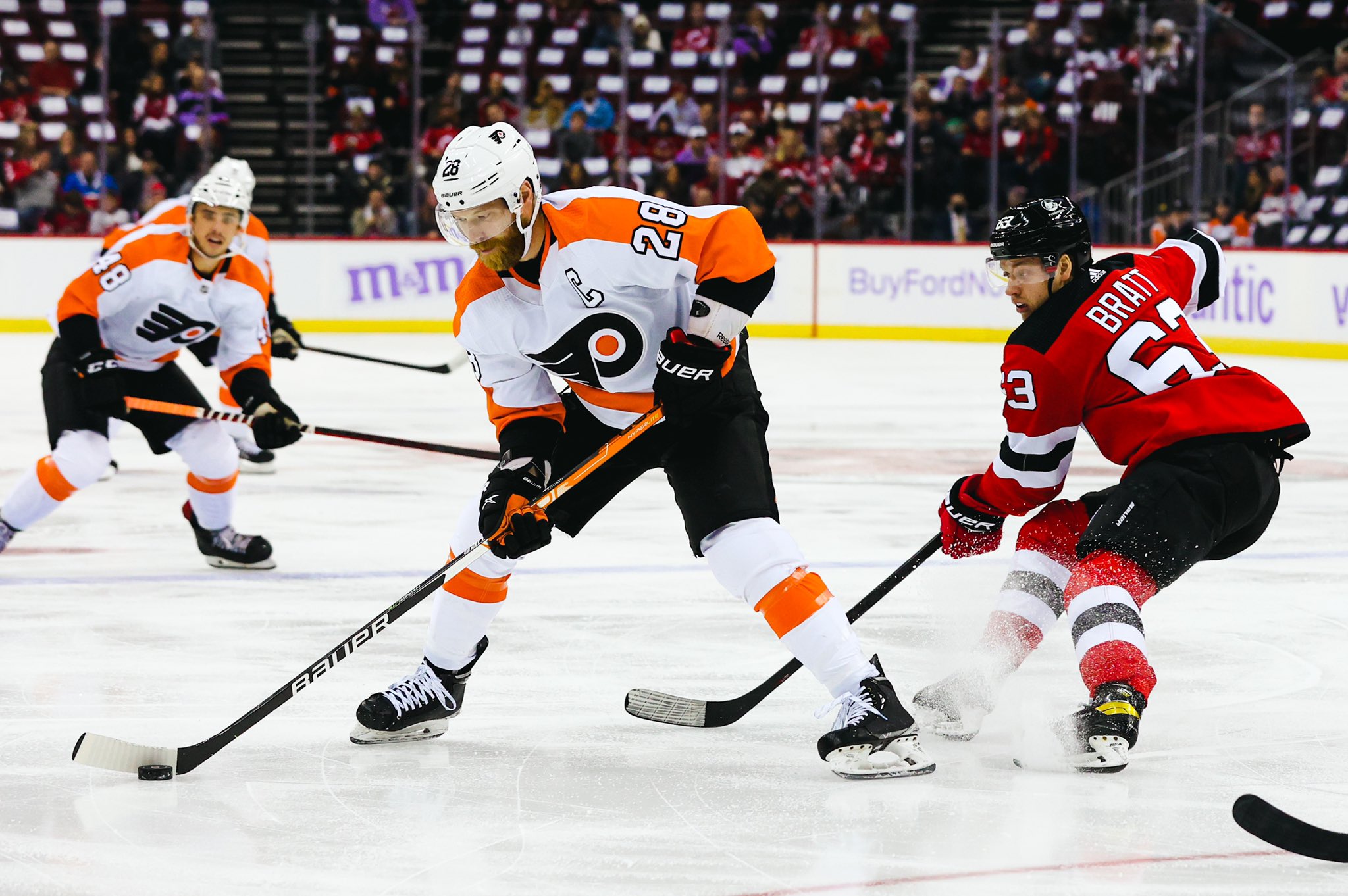 The Philadelphia Flyers, in the midst of a five-game losing streak, took their ongoing woes into Prudential Center for a Sunday night date against the New Jersey Devils.

The Flyers maintained good pressure earlier in the contest and fought hard at times, but fell in Newark to the Devils by a score of 5-2 to extended their losing streak to six games. The streak is the longest for the Flyers in the Alain Vigneault era.

The game started off with some good pressure from the Devils, who knew the Flyers have been playing on their heels. Just over five minutes into the contest, they took major advantage of it.

New Jersey served up a flurry of shots against Martin Jones and the Flyers, including some testers that Jones had to be sharp on. Andreas Johnsson was able to retrieve a loose puck in the left circle after the shooting gallery was seemingly over, and he spotted an open Dougie Hamilton.

Hamilton was all alone in the low slot for an easy redirection and his sixth goal of the year gave New Jersey an early 1-0 lead at 5:07 of the opening frame.

After the goal, each team would try to extend the lead or tie the game up. Jones and MacKenzie Blackwood were having solid periods for their clubs.
The game’s first penalty was called at 14:13 and the ice would open up a bit for one minute and forty seconds.

Ryan Graves was called for interference against Travis Konecny and the Flyers would head to their first power play of the evening. The simply terrible power play, coming into this game clicking at an abysmal 13.8% clip, came up short again on an abbreviated man advantage.

Philadelphia would serve a penalty of their own at 15:53 as Joel Farabee was whistled for hooking against Damon Severson, and the Flyers’ power play ended 20 seconds early as a result.

Once Graves exited the box, the Devils set up their first power play of the night. But after coming up short in their first attempts at the net, Ivan Provorov shoveled the puck out of a scrum and found Scott Laughton.

His 4th goal of the season, this one on the penalty kill, with 2:47 left in the first period would be the final notable moment before time ran out. Philadelphia led in shots on goal 9-7 after twenty minutes and had some momentum heading into intermission.

You would think that the Flyers would learn to start out periods stronger by now, especially after letting a goal up in the first five minutes of the game. Yeah, apparently not.

The aforementioned Johnsson struck for the Devils just 1:47 into the middle frame. Johnsson had a breakaway and a rebound that were both shut down by Jones, and the puck found Rasmus Ristolainen. Ristolainen forced the puck up the boards but it was intercepted by Jesper Bratt. Bratt dished the puck to a streaking Johnsson in the slot and he stuffed it by Jones for a 2-1 lead.

After showing virtually no signs of life, Zack MacEwen and Mason Geertsen dropped the gloves at 6:06. Both guys were just chucking haymakers with no defense at all, but MacEwen got the best of the Devils forward as he bloodied Geertsen in the end.

MacEwen’s fight sparked the Flyers a little bit as they seemed to be more alert and started to push back against the Devils’ efforts on both sides of the puck.

At 12:56, Philadelphia would have another opportunity to tie the game after Graves was sent to to the box on a delay of game call after flipping the puck directly over the glass.

Of course, the Flyers’ power play units did absolutely nothing with the opportunity. Wash, rinse, repeat.

The period would end with not much else to note, aside from a Justin Braun hooking penalty against Jimmy Vesey that was recorded in the books as the clock showed zeroes.

New Jersey led in second period shots 14-9, and took the game lead overall 21-18. The Devils were the more aggressive team in the period and were buzzing more often than the Flyers, and Philadelphia had no answers in the middle twenty minutes.

The Flyers successfully killed off Braun’s penalty to keep the score at 2-1. Philadelphia finally took a page out of New Jersey’s playbook and decided to actually have a strong start to a period, and they evened things up at 3:03.

Joel Farabee was the recipient of a Scott Laughton cross-crease feed and he rammed home the puck by Blackwood to tie the game at 2-2. It was Farabee’s third goal in three games, and it couldn’t have come at a more fantastic time.

The Flyers would head back to the penalty kill at 6:44 after Cam Atkinson was the guilty party in a delay of game penalty. Luckily they’d kill it off to remain spotless on shutting down New Jersey’s power play tonight, and they’d have some help in doing so.

The Flyers would get their own power play for 1:48 as Vesey took a tripping penalty against Ristolainen at 8:32. I think we already know how the end of that story goes, another failed attempt at the power play.

Bratt would break the stalemate with 8:04 remaining in the third period thanks to a brilliant move on Jones and a great play by Johnsson. Ivan Provorov coughed the puck up on a great check by Johnsson at the Flyers blueline and the Swedish forward skated in.

Johnsson fed the puck to a streaking Bratt, who skated in with speed and fooled Jones on the backhand to give the Devils a 3-2 lead.

New Jersey added some insurance with a Nathan Bastian tally at 14:14 after a Philadelphia breakdown. Hamilton ended up virtually alone at the goal mouth with Bastian and he set up the newly reacquired forward for the tap-in and a 4-2 lead.

Johnsson added the last little bit of salt in the wound as he fired home an empty-netter with 2:56 to play as Alain Vigneault pulled Jones early down by multiple goals.

That was all she wrote as the New Jersey Devils handed the Flyers their sixth straight defeat. This loss was especially crushing when you consider it’s a division matchup, a historic rivalry, and the Flyers needed to show some sort of life. But they disappointed once again.

The Flyers travel to Madison Square Garden on Wednesday night to take on another Metropolitan Division rival in the New York Rangers. Changes have to be made for this team to be successful. Heads will roll soon enough if this play continues, and it could happen as soon as this coming week if they drop another game to New York.

Are the Flyers in Must Win Mode Already Against New Jersey?
Flyers Desperately Looking For Answers in the Big Apple Against Red Hot Rangers