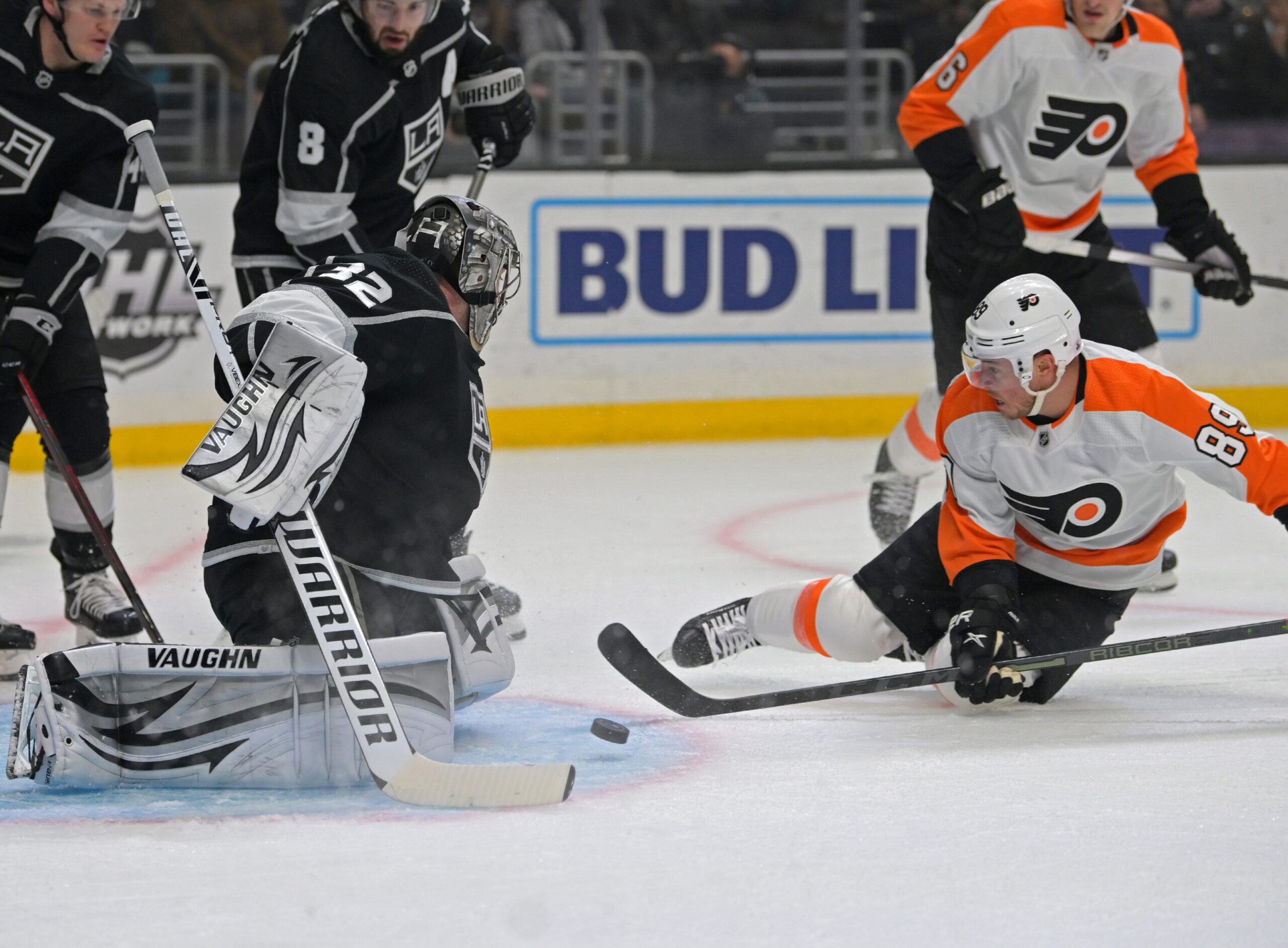 The New Year has rung itself in, and the Philadelphia Flyers’ resolution is to play themselves into a playoff spot and keep things rolling. They entered tonight’s contest against the Los Angeles Kings on a seven-game point streak and sat one point out of a playoff berth, but they’d massively disappoint in the third game of this four-game road trip by falling 6-3 in the City of Angels.

There are good starts, then there are bad starts, then there’s whatever the heck the Flyers began the game with. Just 12 seconds in, they let the Kings cycle the puck behind their net, and Viktor Arvidsson casually skated in and wrapped around an easy attempt on Martin Jones as Ivan Provorov watched to give the Kings a 1-0 lead. It was clearly not the beginning to a contest any team is looking for, much less a Flyers team that’s been clearly plagued by fatigue and the COVID issues that have surrounded them.

Philadelphia would try to push back and fire some pucks on Jonathan Quick to levy a response, but the longtime Kings netminder held the Flyers at bay. At 3:48, Arvidsson would serve the game’s first penalty as he was called for holding against Claude Giroux, and Los Angeles would give the Flyers a power play. The Flyers’ power play has been playing better of late, but they couldn’t capitalize on the Kings’ lowly penalty kill and Arvidsson exited the box without costing his team on the scoreboard.

With 7:44 left in the period, Cam Atkinson was hauled down by Phillip Danault on a breakaway and was awarded a penalty shot on the play. Atkinson faked forehand to backhand, but Quick was able to get his pad on Atkinson’s attempt to keep the Kings ahead.

Despite being denied a goal by Quick, the Flyers wouldn’t quit and with 7:03 remaining in the period, Giroux blasted a shot that hit Atkinson in front and trickled through Quick and sat at the goal mouth. Joel Farabee was right on the spot and pounded home the loose puck through two L.A. defenders to tie the game at 1-1 on a shift filled with good energy from Philadelphia.

Beezer stays calm amidst the chaos and capitalizes pic.twitter.com/J5fCe5p3Ma

The Kings, despite letting up a goal, didn’t wilt under the pressure and went back to the wraparound play that worked before. Danault was able to fend off the attempted defense from Provorov and sent a puck in on Jones. He made the initial stop, but Trevor Moore was out front and was able to fire home the rebound by Jones to put the Kings back on top with 5:33 to play in the opening period.

With 3:52 remaining, the Flyers would get their second power play of the game after noted pest Brendan Lemieux was called for cross-checking after Patrick Brown took a spill near the boards. The Flyers did a much better job setting up in the zone and generating chances this time around early in the man advantage, and even the second unit had some really great looks, but Los Angeles would have none of it and stayed perfect on the kill in the game to that point.

The Kings would get their second power play with 1:14 left in the frame after Travis Konecny was given a cross-checking call of his own against Lemieux as the L.A. winger was in the midst of a small scrum with Rasmus Ristolainen. Konecny took exception to Lemieux’s actions in it, but was the lone player found guilty out of it all.

Los Angeles would end up with 1:01 of 5-on-3 time after Ristolainen joined Konecny in the penalty box for boarding against Arvidsson after he had a golden scoring chance just bounce by the Flyers’ net. Jones would stave off the Kings’ efforts late in the period and kept things at 2-1 on the scoreboard, and L.A. would have 46 seconds of a two-man advantage left entering the first intermission.

In addition to leading in goals, the Kings led in shots on goal 17-12 over Philadelphia through twenty minutes. The Flyers led in blocked shots and hits, but as a result of the Kings having more possession of the puck and more scoring chances.

47 seconds into the middle period, the Kings remained patient after Patrick Brown broke his stick on a shot block, and they passed the puck around before Adrian Kempe blasted home a one-timer off a cross-ice feed from Kopitar to make it 3-1 Los Angeles. The Flyers killed off the first penalty, but Kempe’s goal came during the abbreviated 5-on-4. Regardless, it was a power play goal against a good Flyers penalty kill that entered tonight 10th in penalty killing percentage.

It seemed like we may not see another goal for the rest of the period as Quick and Jones went save for save against one another, but with 6:33 remaining, the Kings added to their lead. Lemieux was spotted breaking up ice by Arthur Kaliyev, and Lemieux had a breakaway with Kevin Connauton hot on his trail. Connauton was shielded away strongly by Lemieux but the Kings forward couldn’t really get a shot off, but Jones was already sliding to where he anticipated the puck going. The puck rolled off Lemieux’s stick blade, off the post, and barely slid in past Jones’ left pad to give the Kings a 4-1 advantage.

Lemieux was certainly involved in all facets of this game, and he was sent to the box for tripping against Ristolainen with 5:38 remaining in the second period. The Flyers again had some good shots against Quick, but the Kings fended off Philadelphia’s efforts with a man up.

That would be about it through forty minutes as Los Angeles maintained a 4-1 lead over the Flyers. They took advantage of Philadelphia’s penalties and miscues with the puck. They seemed to be the hungrier team and were playing with more speed and physicality.

The Flyers ended up with a power play just 1:01 into the third period after Sean Durzi hooked Oskar Lindblom, but Philadelphia couldn’t pull within two on another opportunity with the power play again. While on the power play, Konecny was yapping at the officials for a hooking call he thought should’ve been assessed on the Kings against him, and apparently he said the magic word and earned himself a ten-minute misconduct. While he was in the box, Blake Lizotte was called for hooking against Provorov, and Philadelphia had a 5-on-3 opportunity, and Mike Yeo called his timeout and made a gutsy yet great call.

The Flyers won the faceoff and Yeo pulled Jones for an extra attacker, and off the bench skated Kevin Hayes into the zone for a temporary 6-on-3. Giroux spotted Hayes low in the right circle and he lasered a shot by Quick to make it a 4-2 game with 17:18 remaining in the period.

Hollywood nets one in Hollywood 😎 (not sure where Hollywood is, never been to LA but it’s probably not far away) pic.twitter.com/FHcUu8ZNS8

After Hayes’ one-timer, the Flyers played with a lot more energy and despite not scoring on the extended power play after the 5-on-3 goal, they generated a lot of chances and kept buzzing even after they were back at even strength. Quick came up huge for the Kings, who were playing on their heels for the first time all night.

Unfortunately, that didn’t last too long and despite the Flyers controlling the majority of the period, the Kings skated up the ice on a counter-rush with Moore and Danault, and Moore set up his centerman for a beautiful tap-in past a stretched out Jones for a 5-2 lead with 8:43 to play. That seemed to pretty much take all the wind out out of the remaining sails that Philadelphia still had up in their fight to mount a comeback.

However, the Flyers weren’t done chipping away just yet. Provorov would get on the board after leaning into a one-time blast from the point off a feed from Farabee to make it a 5-3 game with 3:59 remaining on the clock. Shortly afterwards, Yeo would pull Jones again down two goals to try and create more offense with the extra skater.

The Flyers tried their best to get closer to surmount the Kings’ lead, but Arvidsson nailed home an empty-netter with 1:44 left to play in the period to make it a 6-3 Los Angeles lead. That’s how this game would finish up, as the Flyers’ point streak would end at seven games with a 6-3 loss despite trying to work hard and persevere in the third period.

Philadelphia will head nearby to Anaheim on Tuesday at 10:00pm ET to finish off the last of these four games on the road trip against the Ducks, who have put together a surprisingly strong season and currently sit second in the Pacific Division. Hopefully they can close out this trip on a much higher note than what we witnessed tonight.