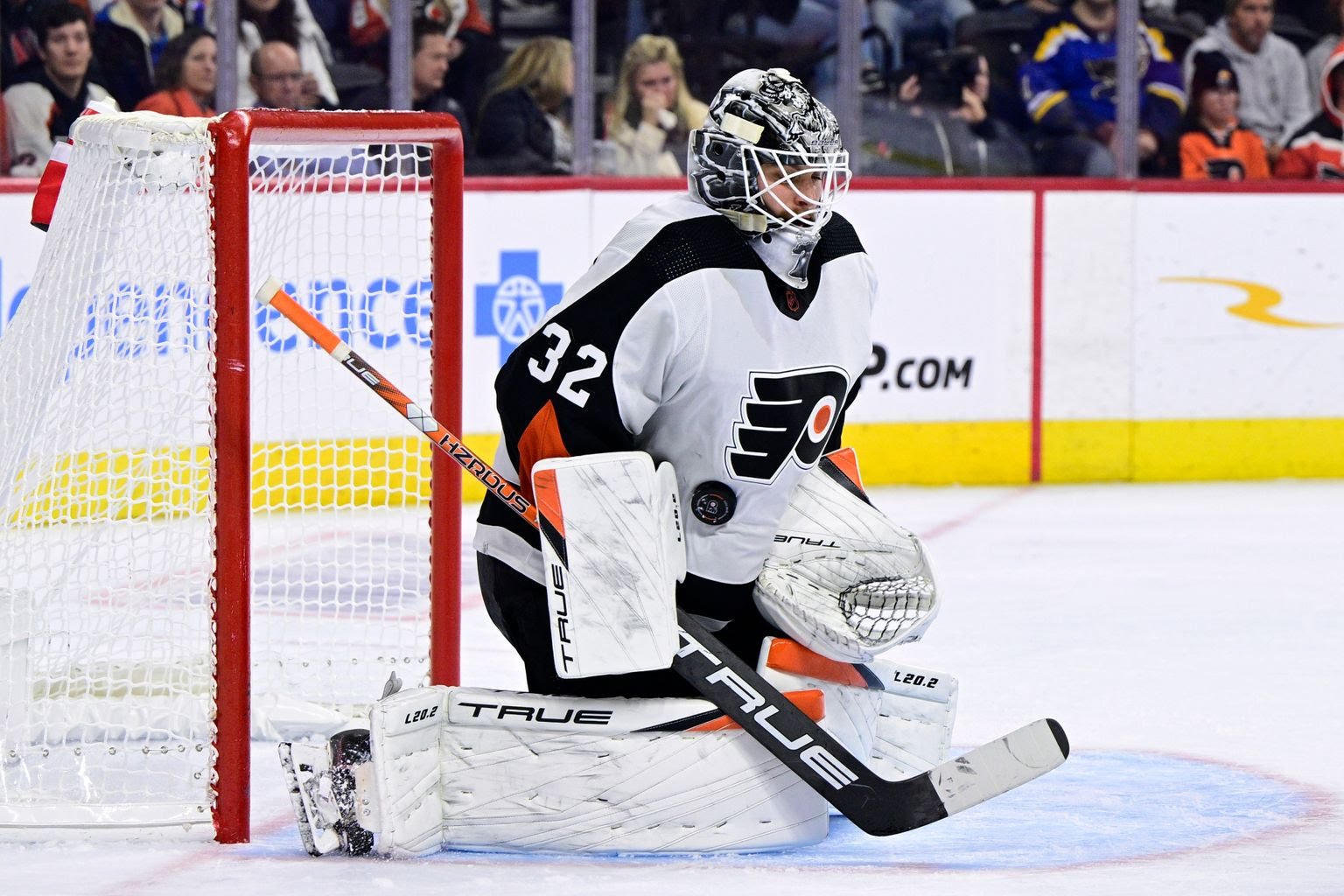 The Philadelphia Flyers defeated the St. Louis Blues 5-1, handing them their 8th consecutive loss after winning their first 3 games. The Flyers got goals from Wade Allison, Travis Konecny, Noah Cates, Lukáš Sedlák, and Owen Tippett, Felix Sandström stopped 27 shots to earn his first career NHL victory, and Cates, Tippett, and Konecny recorded 2 points each in what was another complete effort from the Orange and Black as they improve to 7-3-2 on the year.

Rasmus Ristolainen returned to the lineup and was slated to start on the third pair alongside Nick Seeler, Wade Allison got promoted to the second line with Joel Farabee and Scott Laughton, but the biggest news ahead of the game was the absence of Carter Hart who missed tonight’s game due to an illness. With Egor Zamula being sent down to make way for Samuel Ersson to backup Felix Sandstrom, Justin Braun found himself on the second pair with Travis Sanheim.

The start of the game had good pace and it favoured the Flyers who were in and around the St. Louis Blues’ net for most of it. The Flyers had a few chances with all their offensive zone time but only really tested backup goaltender, Thomas Greiss, with a short-side shot from Tony DeAngelo that was blockered aside.

Nick Seeler decided to get things rolling the way Nicolas Deslauriers has done all year, as he dropped the gloves with former Flyer Brayden Schenn in a quick yet spirited bout that favoured the current Flyer.

Nick Seeler and Brayden Schenn go at it! #Flyers pic.twitter.com/kmVQdj8tJx

A minute or so later, Robert Bortuzzo dropped the gloves with Zack MacEwen right off the faceoff as the Blues – who entered the game on a heavy losing streak – wanted to stir the pot and send a message.

For a team that has struggled mightily all season in thwarting shots on net and scoring opportunities, it took the Blues nearly seven minutes to record their first shot on goal but once they got off the schneid, the floodgates opened as the struggling Blues came within inches a few times in taking the game’s first lead. Pavel Buchnevich took a fluttering shot that hit the top of the crossbar and then a shift later Vladimir Tarasenko and Robert Thomas both had high danger scoring chances in and around the net but both missed the net.

A miracle for the #Flyers… pic.twitter.com/dOYryDXhlZ

The Flyers countered back with chances of their own as the top two lines were the ones generating them. Joel Farabee made a nifty move towards the net and tried stashing it through the five-hole of Greiss for his 100th career point but no dice. Nick Seeler took a point shot with traffic in front, Laughton had a hack at the rebound but couldn’t connect, and then Kevin Hayes set up Travis Konecny at the front of the net but the puck just bounced off his stick.

The Flyers looked good until they were pinned in their own zone for far too long as Seeler and Ristolainen were stuck on the ice for nearly 100 seconds. Sandström was able to quell the damage as the Blues were climbing back on the shot clock.

The Flyers ended the period with a flurry of their own as they ended the period with a 18-9 shot advantage and several more missing the net – off the sticks of Hayes, Laughton, and Allison. It was probably the most complete period they’ve played all season but Greiss, who has played the Flyers countless times in the past, was a stone wall and keeping the game tied heading into the intermission.

Each team had one shot on goal in the first five minutes with a lot of neutral zone clogging, allowing for a lot of dump and chasing. However, with 14:25 remaining in the period, MacEwen was called for a high sicking minor, giving way for the first power play of the game. The Flyers were able to kill the penalty with some solid defense but even better goaltending as Sandstrom robbed Brayden Schenn, Ryan O’Reilly, and Jordan Kyrou to keep the game tied.

Coming out of the first commercial break of the period, the Flyers got the first goal of the game after some great passing and give and go’s. Ivan Provorov and Joel Farabee played some pitch and catch before the former went towards the net, centered a pass into traffic with Wade Allison in the right spot at the right time for his third goal of the season.

Also on the play was Farabee collecting his 100th career NHL point. The Flyers then doubled their lead off the stick of their leading goal scorer and point getter in Travis Konecny. This goal came from their own end after Ristolainen sent the puck around the boards to Kevin Hayes who looped it out of the zone to Konecny. Konecny and Tippett played a little give and go before the former ripped a shot stick side to give his side a 2-0 lead.

With 1:23 left in the period, Ristolainen got high-sticked by Tarasenko, sending the Flyers on their first power play of the game with a chance to extend their lead to 3 before the third period. 39 seconds into the power play, Hayes was set up on a one-timer but Greiss was just able to get back in time to make the save and cover the puck. Unfortunately 11 seconds later, Owen Tippett was called for a tripping penalty as he lost the puck trying to make a move and ended up tripping Robert Thomas in his attempt to recover the puck.

That didn’t stop Philadelphia from extending their lead to three with 3 seconds left. Scott Laughton kept the puck in the zone and sent a pass to Travis Sanheim, who then redirected a quick touch to Noah Cates who had an open net to shoot at as Greiss was well out of position.

The Flyers entered the second intermission with a 3-0 lead, a 27-16 shot advantage, and a slight 26-25 hit advantage.

The Flyers were 20 minutes away from getting Sandstrom his career win and to start the period the Flyers came inches away from extending their lead to an improbable 4-0 score but Tony DeAngelo was robbed by the arm of an outstretched Greiss.

On the very next shift Ryan O’Reilly scored his second goal of the season with a little over 14 minutes to go after Ivan Barbashev dropped a pass to O’Reilly through his legs while also tying up Provorov.

Brayden Schenn came close on the very next shift in cutting the deficit to one but Sandström stood his ground. Fortunately the Flyers regained their three goal lead after Lukáš Sedlák scored his first goal as a Flyer. Nick Seeler sent a slap-shot pass to Sedlák who was at the front of the net, stopped the puck and then buried it past Greiss.

SEDLAK WITH HIS FIRST AS A FLYER!!! 4-1 #FLYERS! pic.twitter.com/7lbCoKqwxV

Everything seemed to have taken place in a 2-3 minute stretch because after the Flyers had scored their 4th goal, O’Reilly and the Blues came back in waves and the captain was inches away from his second goal of the period but he hit the post – the fourth post for the Blues in the game. The rest of the period was as you would expect from a team with a three-goal lead and trying to close things out. A lot of dump and chases and neutral zone plays from the Flyers versus the Blues who were throwing the kitchen sink towards the defense and Sandström.

To add insult to injury, Owen Tippett iced the game with his 3rd goal of the season with only 38.5 seconds remaining. The Flyers jumped on a neutral zone turnover and Konecny – of all people – set up Tippett as he came down the wing and fired a shot that Greiss would love to have back as it bounced off the glove and into the net for the 5th goal of the game.

Felix Sandström would finish the game with 27 saves en route to his first career NHL win as the Flyers improved to 7-3-2 on the season.

The Flyers will hit the road for Columbus on Thursday night as they take on the struggling Blue Jackets at Nationwide Arena.