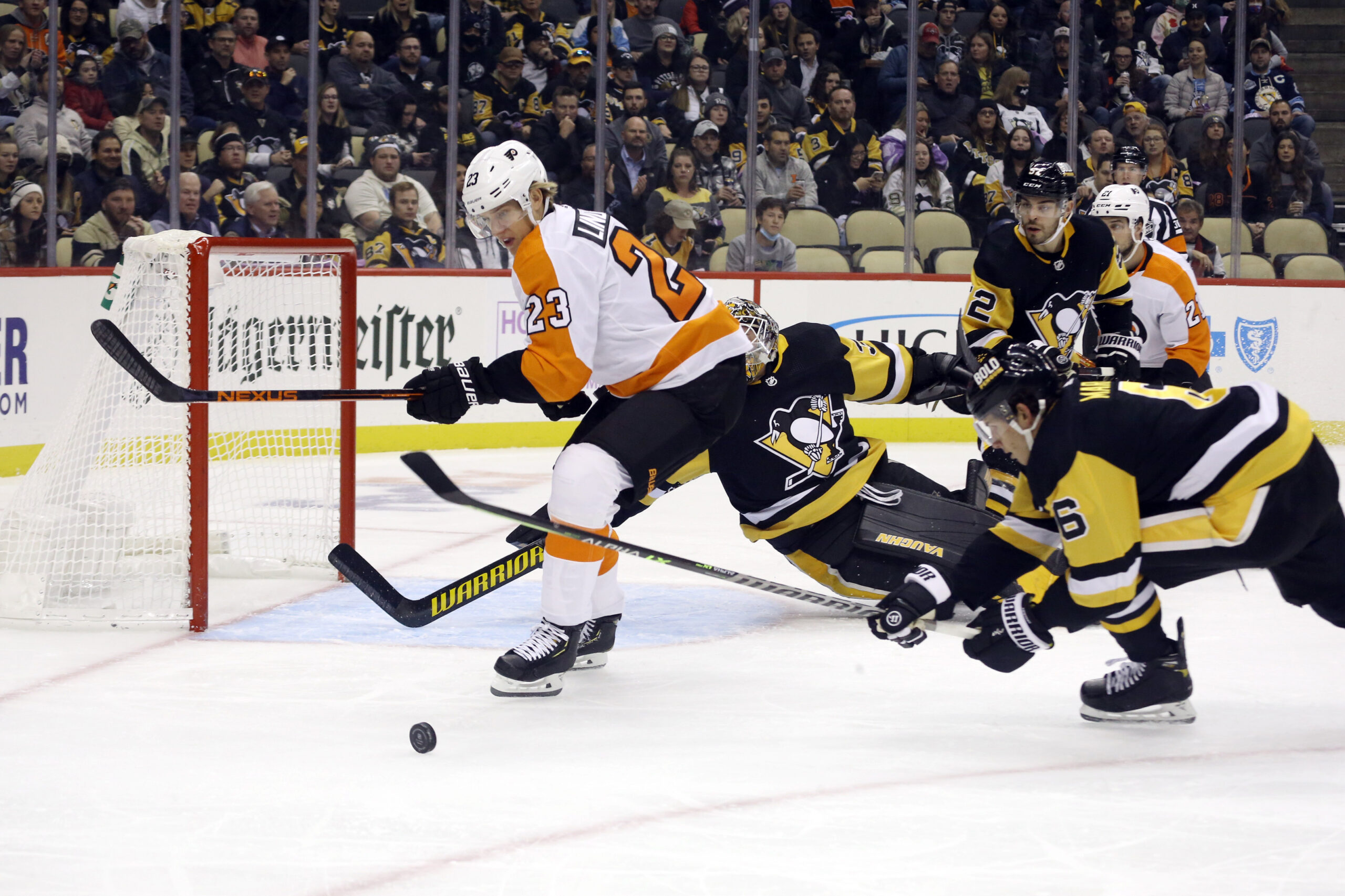 The Pittsburgh Penguins defeated the Philadelphia Flyers 3-2 in overtime, thanks to a reviewed game winning goal by lineup returnee Kris Letang. Without the services of their head coach Mike Sullivan due to COVID protocol as well as Sidney Crosby, Evgeni Malkin, and Bryan Rust among others, the Penguins played like a team that didn’t even need them. They were dominant in spurts and Tristan Jarry stood his ground for the most part as the Flyers couldn’t find a way to take 2 points from this contest.

It was not the start the Flyers would have wanted as it only took the Penguins 16 seconds to find the back of the net. It was a simple play by Zach Aston-Reese as he rimmed the puck around the boards. It reached Michael Matheson at the point and he simply took a shot that deflected off Brock McGinn’s stick and past Carter Hart.

The first half of the period was dominated by the Penguins as they were buzzing in the offensive zone. The Flyers looked extremely flat-footed, especially during their lone power play of the period, but found their groove in the latter half. The Flyers ended up outshooting the Penguins 17-6 and Tristan Jarry had to come up big several times.

The second period was more of a wide open contest but mostly in favor of the Penguins. They came out firing from the opening draw and never relented. Carter Hart had come up big several times throughout the period even after the Flyers had tied it up. Facing the number one penalty killing unit in the NHL, the Flyers’ second power play of the game cashed in to tie things up at 1-1.

Claude Giroux, with his patented fake shot-pass, found Travis Konecny at the front of the net. He used James van Riemsdyk’s patented net-front presence move, where he spins in the blue paint, and roofed the puck top shelf on Jarry. That was kind of it for the Flyers’ offense in the period as the Penguins came back stronger than before. Without Hart’s effort (16 saves in the period) it could’ve been a much different score heading into the third period.

Just over four minutes after the Flyers had tied things up, Jake Guentzel took the lead back for the Penguins with yet another simple shot directed for the net. He bobbled the puck as he entered the zone, which gave Jeff Carter the right amount of time to skate by the front of the net and pose as a screen on Hart. The puck slid by Carter’s legs and into the back of the net past Hart.

In the third period both teams were locked in, and even though the Flyers had a healthy amount of shots, the quality of shots were lacking. A late power play afforded the Flyers with a chance to tie things up, however for the first 1:59, the Flyers couldn’t produce any chances. With the power play winding down, Giroux banked it off the boards for Couturier who was robbed by Jarry.

Matheson flubbed a pass behind his own net and the fortunes turned for the Flyers as the puck bounced towards a streaking Scott Laughton, who ripped a slap shot top shelf on Jarry to tie things up with 2:52 remaining in the third.

There were several chances for both teams in overtime as Guentzel was robbed by Hart on the first shift. That was followed up by Cam Atkinson and Laughton teaming up for a chance of their own but Jarry wouldn’t buckle. Kris Letang finished off the game with a wraparound goal that was reviewed for a lengthy amount of time. It was ruled that there was conclusive evidence that the puck crossed the line and that was all she wrote for this one.

Tristan Jarry collected his fourth win of the season and played one heck of a game by stopping 36 of 38 shots. The Penguins received goals from Brock McGinn, Jake Guentzel, and Kris Letang. Michael Matheson, Zach Aston-Reese, Danton Heinen, John Marino, and Jeff Carter all collected an assist.

For the Flyers, Carter Hart was on the wrong end of another game where he deserved the win. He had to make several huge stops throughout this game and without his efforts, it could’ve been a loftier score. Travis Konecny and Scott Laughton scored for the Flyers, while Claude Giroux, Ivan Provorov, and James van Riemsdyk collected assists. Hart made 33 stops. Up next for Philadelphia are the Washington Capitals on Saturday night.

Preview: Philadelphia Flyers at Pittsburgh Penguins (11/4/21)
Where Has the Offense Gone?