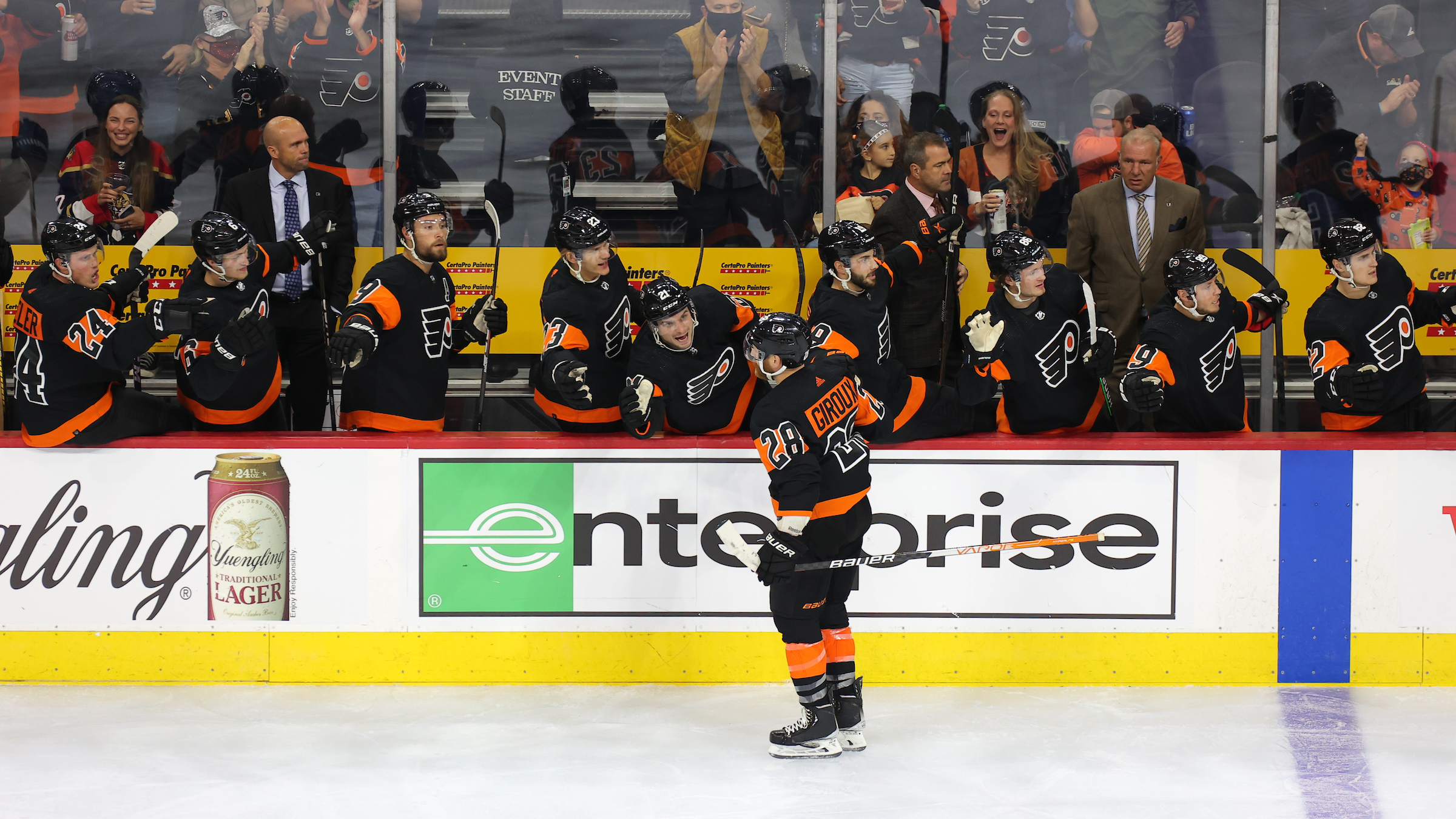 With the first month of the season coming to an end for the Philadelphia Flyers, the month of October was a lot more successful than most people could’ve imagined. They finished 4-2-1, but many of their issues from last season have seemingly improved this year. Their penalty kill isn’t a liability, their goaltending has been stout, and their offense is clicking at a high rate.

The season opener against the Vancouver Canucks gave us a glimmer into last season’s glaring issues; a disastrous penalty kill, soft goaltending, and giving up when the going gets tough. However, the Flyers powered back into the game, tied it late, but took a hard fought shootout loss.

The Flyers followed that up with 2 gutsy wins, dismantling the Seattle Kraken 6-1 and then dispatching the Boston Bruins 6-3. The Flyers were rolling and took their two-game winning streak into a match-up with the red-hot Florida Panthers. It was a measuring stick game and the Flyers were fighting toe to toe with the Panthers until a late shorthanded goal iced the game.

The Western Canadian road trip was next and the Flyers were heading into Edmonton on the heels of a 4-11-3 record in their last 6 years out West. Facing off against two of the best players in the NHL in Connor McDavid and Leon Draisaitl, the Flyers and Carter Hart held their own and defeated the Oilers 5-3. Just like in the Canucks game to open the season, Hart had a few hiccups early but then shut the door with 22 consecutive saves to finish the game.

On the second leg of a back-to-back situation, the Flyers and Martin Jones headed further west to Vancouver to exact revenge and finish off their short season series. It was a quick start to the game as the Flyers scored 22 seconds into the game and then responded with the eventual game winner 7 minutes into the first.

The final game of the month was a snooze-fest of sorts as the Flyers looked tired and slow-footed against the Calgary Flames. The Flames were coming in on a five-game winning streak after sweeping their road trip, and they came out firing. At one point the Flyers were being outshot 22-4 midway through the second period, without a shot in that second stanza.

The Flyers fell 4-0 but if it wasn’t for Carter Hart, it could’ve and would’ve been a lot more lopsided as he kept them in the game for as long as he could. On the season he carries a 2-2-1 record with a 2.79 goals against average and a .915 save percentage. He looks a lot better than he did last year and is quickly regaining his 2019-20 form that had everyone excited for the future.

Martin Jones’ signing was met with a lot of distaste and contempt after his rocky tenure in San Jose. However, as primarily the backup of the Flyers, coupled with his reunion with goaltending coach Kim Dillabaugh, he has started off the season very well. He made his Flyers debut with a 37-save performance against the Bruins and then shut the door against the Canucks with 27 saves, including a 16-save second period. On the season he has a 2.02 GAA and a .941 SV%.

The Flyers’ penalty kill has been a good surprise as well after a porous showing in the pre-season. On the season they’ve killed 24 of 30 attempts, but before the Calgary game they had killed 19 of their last 21. They’re a lot more aggressive, not sitting back, and blocking a lot of shots.

The power play also looks a little better this year with different looks and more shots towards the net. Keith Yandle is the perfect quarterback for the top unit as he always seems to find a way to make a play, whether through a pass, a shot for a deflection, or keeping the puck in the zone and keeping momentum intact. On the season they’re 5 for 21 for a 23.8% conversion rate.

The offense has been a surprise as well, as many were concerned about the lack of changes and moves made towards the forward corps. Sean Couturier leads the team with 9 points in 7 games, Claude Giroux has 4 goals and 8 points, and Cam Atkinson has 6 goals and 7 points. Derick Brassard, Joel Farabee, and Travis Konecny have also had great starts with 6 points on the season. The offense is averaging 3.57 goals per game through the first seven games, good for being ranked 7th in the league.

The defense, which had the most changes made to it, looks a lot better as well. Ryan Ellis, who has missed 3 games, looks to be the prime partner for Ivan Provorov when healthy. Rasmus Ristolainen is settling in his new role with Travis Sanheim. Justin Braun has found his way all throughout the lineup but has been a very positive surprise so far. When fully healthy, the Flyers defense has played brilliantly, so getting back a healthy Ellis is a top priority.

With a 15 game month of November on the docket, the Flyers will be pleasantly happy with their 4-2-1 start. They’ve played pretty well for the most part and other than last night’s game against the Flames, the Flyers have been in every game from start to finish. They face off against the winless Arizona Coyotes, their cross-state rival Pittsburgh Penguins, and the Washington Capitals this coming week, beginning with their date against the Coyotes on Tuesday in South Philadelphia.