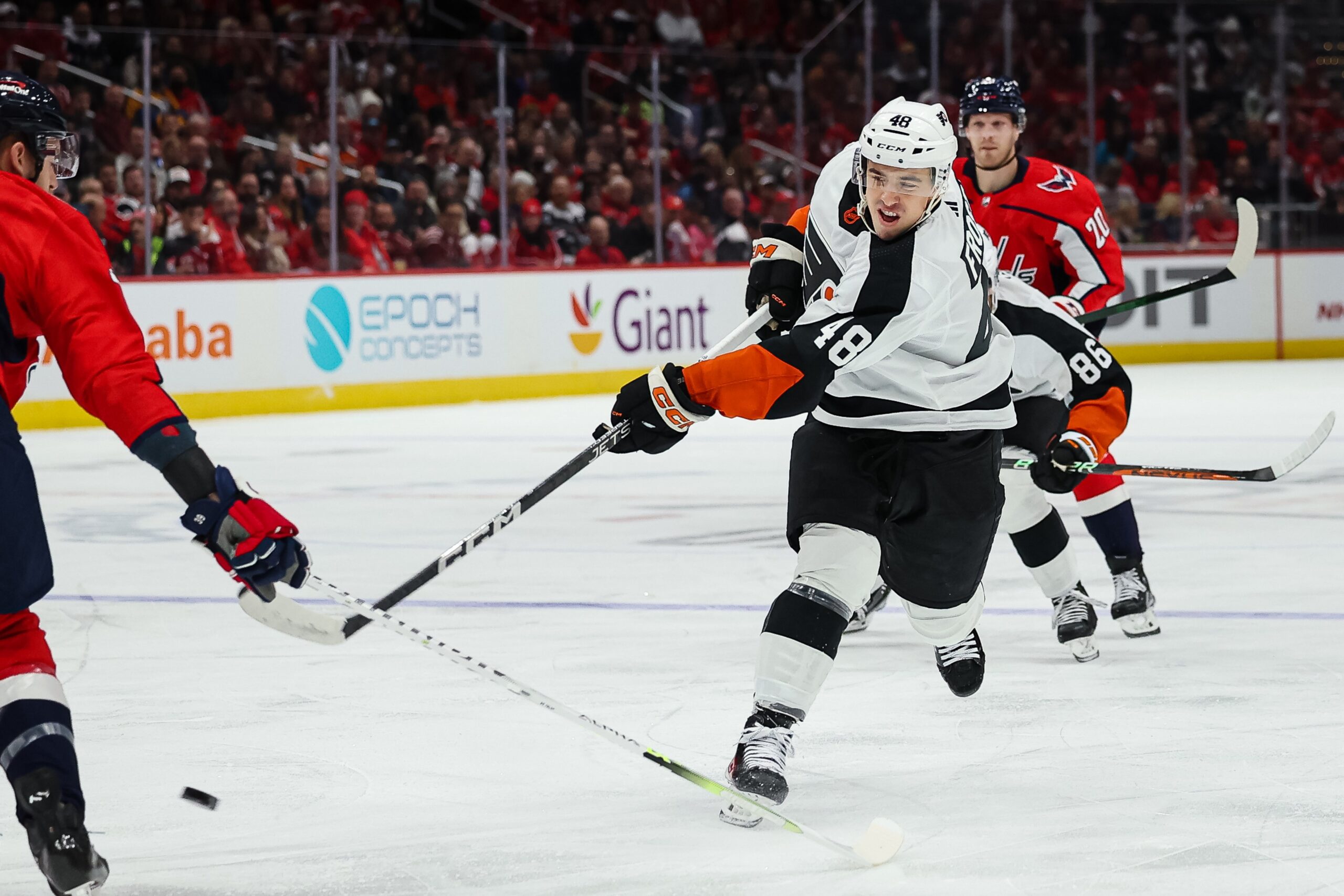 The Philadelphia Flyers’ losing streak was extended to 8 games and brought about their 11th defeat in the last 13 after their latest collapse against the Washington Capitals.

Holding on to a slim 2-1 lead with 3 minutes remaining in regulation, Sonny Milano tied the game before Alexander Ovechkin scored the 790th goal of his career in overtime to snap Washington’s 4-game losing streak. T.J. Oshie returned to the lineup after missing the last 11 games with a lower-body injury and made an immediate impact with 2 assists, Darcy Kuemper was sloppy to start but made 21 saves to register the win, and Felix Sandstrom made 29 saves with the Flyers receiving goals from Morgan Frost and Patrick Brown.

The Flyers have still not won a game since November 8th against the St. Louis Blues.

The Philadelphia Flyers entered this game with more clarity on their injured players as both Scott Laughton and Travis Konecny were ruled out for the next 2 weeks, Cam Atkinson is undefined, Bobby Brink is a month away, James van Riemsdyk and Wade Allison are around 3 weeks away, and Sean Couturier still has 3-4 months to go. The lineup remained relatively similar to last game with the exception of Jackson Cates coming in for Max Willman and Felix Sandstrom tending the twine for the first time since November 13th against the Dallas Stars, a span of 4 straight games.

The struggling Washington Capitals and specifically Alexander Ovechkin came within inches from scoring the opening goal minutes into the game. Ovechkin was set up in the slot but the Flyers convened on to him quickly as his one-time shot was contested and didn’t reach the net. However the loose puck was there for the taking and Joel Farabee decided to walk it out front but turned it over to Dylan Strome, who was streaking around the net and almost deposited the turnover on the backhand that went just wide.

It was Philadelphia who struck first however as Morgan Frost scored his first goal in 18 games. Darcy Kuemper would’ve loved to have that one back as Frost entered the zone with speed but took a nonchalant shot towards the goal that bounced off his glove, over his head, and into the net for his third goal of the season after he scored a brace in the season opener.

Ahead of the first commercial break and with injuries mounting in Philadelphia, Kevin Hayes, who is now the joint-leading scorer on the team with 19, was somewhat sandwiched by Ovechkin and Strome and went to the bench in pain, grimacing, and needed to stretch his shoulders out – fortunately he returned the next shift out.

With 10 minutes left, Frost made a very odd pass behind him to nobody which led to Lars Eller and the Capitals going the other way. The turnover not only led to 2 scoring chances right off the hop, Sandstrom had to freeze and cover the puck, which then led to another scoring chance off the faceoff, and then the Flyers were called for a tripping minor courtesy of Justin Braun.

Something we are not used to seeing as Flyers fans are the Capitals struggling on the power play as they entered the game going 1 for their last 26 and as fate would have it, it only took the Capitals 45 seconds to get on the board and tie the game. However, as Marcus Johansson pulled a JVR with his net-front move, got stopped by Sandstrom, he then kicked the rebound with a very distinct kicking motion. It didn’t take long for the referees to waive it off as the Capitals returned to the power play down by 1.

It didn’t really do much harm for the Capitals as they tied the game up only 22 seconds later off the stick of none other than Johansson. T.J. Oshie – returning to the lineup after missing the last 11 games – set up Strome in the slot but his shot didn’t have a lot of mustard on it and fluttered towards Sandstrom.

However that helped the Capitals more so than being a hindrance as Sandstrom wasn’t able to corral the rebound, which allowed Ovechkin to come into the slot and whack away at the rebound which went through his five-hole. It initially seemed like Ovechkin had scored goal number 790 but it tipped in by Johansson at the last second who was behind Sandstrom after getting past Ivan Provorov.

The Flyers received their first power play of the game at the 11:53 mark after Nic Dowd was called for a hooking minor, putting a power play that has gone 2 for their last 23 to the test. After the Flyers recorded the first 4 shots, the Capitals returned the favour with 8 straight, before the Flyers added two more on their man advantage but nothing that really troubled Darcy Kuemper.

What ensued after were back to back shifts by Washington in the Flyers end that resembled a power play with crisp passing, cycling, and the Flyers looking tired and flat. Fortunately for Philadelphia, Sonny Milano took an offensive zone penalty as he was called for a high-sticking minor, quelling their momentum for the time being.

The power play looked even worse as the Capitals didn’t even look like they were down a man for 2 minutes. The period ended tied at 1, the shot clock was tied at 10 apiece, and the Capitals had a 12-10 hit advantage.

A choppy and slow start to the second period was aided by a lengthy stoppage after John Carlson’s dump-in shattered some glass. The Flyers’ lack of talent was evident more and more as the game went on as the Capitals were doing a great job at stuffing the neutral zone and keeping the Flyers playing a dump and chase game.

Justin Braun was called for his second penalty of the game as he was sent to the sin bin for a hooking minor with a shade under 12 minutes to go in the period. The Flyers survived the penalty in large part due to Felix Sandstrom, who stopped all 5 shots fired his way. The scoring chances didn’t stop there as Dylan Strome rang one off the pipe and then Alexander Ovechkin had all the time in the world in his office that was gobbled up by Sandstrom shortly after the penalty had expired.

With the Flyers stuck in their own zone for most of the period and the Capitals coming in wave after wave, the last thing you’d expect was for Philadelphia to take the lead right? The opportunistic Flyers cashed in on their best shift of the period after Tony DeAngelo sent a pass towards Nicolas Deslauriers who one-touched it to Ivan Provorov on the opposite side of the point. Provorov then charged up the wing, made a spin-o-rama move, and sent a shot towards the net that deflected off of Patrick Brown and rolled past Darcy Kuemper who tried sealing the post. That was Brown’s first goal of the season in only his 4th game back from injured reserve.

With exactly 2 minutes to go Lukas Sedlak was called for an interference minor, which was unfortunate for a few reasons but one of them being that Kieffer Bellows seemed to score a wrap-around goal just as the referee had blown the whistle. The Flyers killed the penalty, the Capitals headed into the second intermission with a 24-15 shot advantage, and the Flyers taking a 25-21 hit advantage.

The Flyers entered the third period with a 5-0-0 record when leading heading into the final frame and they came out firing with 4 shots in the first minute and a bit. Then Matt Irwin was called for a roughing minor only 100 seconds in, giving the Flyers a fantastic opportunity to double their lead. Officially, with 10 seconds remaining on the man advantage, Lars Eller was called for a slashing minor giving the Flyers a short 5 on 3 opportunity. The Flyers actually had the puck for an additional 20 seconds before the whistle was blown but they weren’t able to fire away any shots as they kept passing, passing, and passing while looking for the golden shot. Kevin Hayes, Morgan Frost, Owen Tippett, and Tony DeAngelo spent the first 3:03 of power play time on the ice with a timeout called in between by the Flyers and Rocky Thompson. They didn’t register a shot on goal – again – and in fact it was Washington who created the better opportunities as John Carlson and Evgeny Kuznetsov had dangerous opportunities thwarted by Sandstrom.

After the Eller penalty, there wasn’t a faceoff or a whistle for well over 11 minutes and in that time the game started opening up a little more with the Capitals playing more aggressively down by 1 goal. Sandstrom was playing extremely well with Washington throwing everything but the kitchen sink at him and to the credit of the Flyers defense, they were in the lanes blocking shots and keeping the Capitals to the outside at times. However, there were several moments and lapses in judgement that ended up as a turnover and/or scoring chance, like when Dylan Strome rang another puck off the post with 7 minutes left in regulation.

With 2:58 remaining in regulation, Sonny Milano tied the game with his 3rd of the season after being set up by Kuznetsov. At real speed it looked like T.J. Oshie was offside after receiving a pass from Kuznetsov upon entering the zone. However, the play was onside as the two veterans played pitch-and-catch before the latter dished another pass to Milano to tie the game.

The Flyers didn’t review this one, waste a challenge, or cause an uproar with a penalty as Oshie just made the play legal with his skate slightly touching the blue-line. Then with just 1:02 remaining in regulation, Milano broke through for an abbreviated breakaway after forcing a turnover on Tanner Laczynski. Sandstrom came up huge by shutting his five-hole as the net then broke off with Provorov crashing into it.

Both teams entered this game on losing streaks while also being winless in overtime with the Flyers being 0-4 and the Capitals being 0-3 – something’s gotta give, someone’s going to snap their losing streak(s), and someone is going home with another loss added to their docket.

The Flyers looked horrendous from the moment the puck dropped as Kuznetsov, Oshie, and Carlson each had a scoring chance before a line change brought out Alex Ovechkin. Sandstrom had to be in 10 places at once as Hayes, Tippett, and DeAngelo were pinned in their own zone.

Ovechkin hit the post, Kuznetsov had a chance at a yawning cage that went too high. and then Strome set up Ovechkin on a one-timer in his spot to take down the Flyers 3-2 in overtime.

The Flyers will host the Pittsburgh Penguins in their annual Black Friday game at Wells Fargo Center.