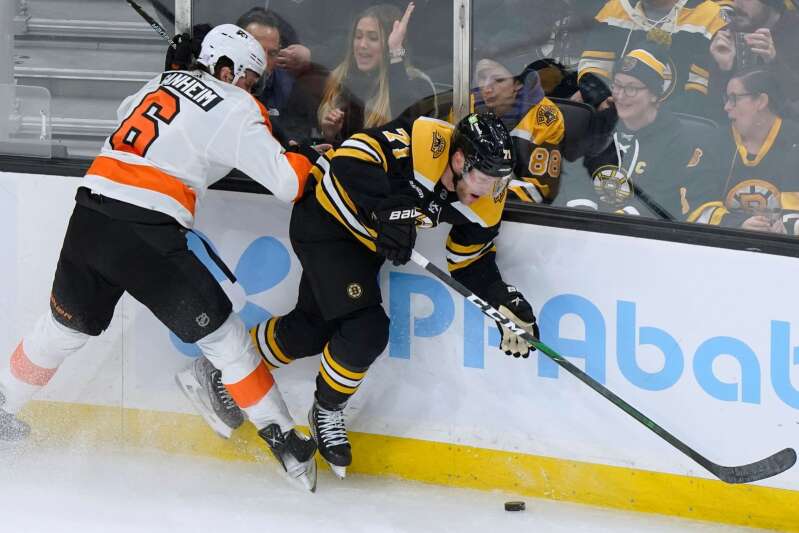 9-0-0. That was the Boston Bruins’ record at TD Garden this season heading into tonight’s game against the Philadelphia Flyers. Those nine home wins made up the bulk of the Bruins’ 14-2-0 record and should have served as a precursor to what was to come tonight.

Despite Carter Hart’s 28 saves and Owen Tippett’s power play goal midway through the third period, the Bruins thumped another opponent on home ice as Tomáš Nosek and Jake DeBrusk each tallied, David Krejčí scored twice, and Linus Ullmark saved 22 of 23 Philadelphia shots to send the slumping Flyers away with a 4-1 loss in John Tortorella’s 1,400th NHL game as a head coach.

The Flyers came out of the gate with more energy than we’ve seen in previous starts to games, which is an encouraging sign. They racked up four of the game’s first five shots on goal and tested Linus Ullmark early and often, but that would come to an end after Travis Sanheim sent a struggling Philadelphia penalty kill on the ice after he tripped up Trent Frederic at 5:39.

The Bruins got their legs under them and pushed back with some quality scoring chances on their first power play of the night, but Carter Hart stood tall and was able to help kill off the penalty.

The Flyers would end up with their first power play with 2:41 left to play in the period after Jake DeBrusk tripped up Morgan Frost. Unfortunately they couldn’t get anything going and didn’t even record a shot on goal, and to make matters worse, Philadelphia was called for too many men on the ice at the very end of their power play. Boston would have their second man advantage of the game and would get nearly a full two minutes with it, but again they couldn’t solve Carter Hart.

Hart put on a clinic in the first period which was highlighted by highway robbery on a wraparound try from Brad Marchand as time wound down in the opening frame.

Hart’s heroics kept the game scoreless after 20 minutes, with Boston going into the first intermission with a 12-8 shots on goal advantage.

The Flyers killed off the remaining time on the Bruins’ power play and hoped to use that as momentum to push back in the middle frame.

The Bruins had other ideas however. As good as the Flyers have been in the second period this season in terms of goal differential, Boston didn’t let the Flyers get a sniff of any sustained pressure or real quality scoring chances. On top of their stingy defense, the Bruins were attacking the Flyers in waves offensively and keeping them hemmed in their own zone.

Boston had another surge just past the midway point of the period and this time they finally cashed in. Hampus Lindholm made a beautiful entry into the Philadelphia zone and after he lost the puck for a split second, Pavel Zacha took the puck and spotted Nick Foligno across the ice. Foligno faked a shot and skated around the Flyers net with Hart out of position at the far post, and the former Columbus captain centered a perfect pass in the slot for Tomáš Nosek to ram home the opening goal past the bewildered Philadelphia netminder.

Right on the nose. 👃 pic.twitter.com/8jAU9ULsVE

As if things couldn’t get any worse for the Flyers, Travis Konecny left the game favoring his right hand after an awkward collision with a Bruins player late in the second period. Konecny left the bench and did not return, and the Flyers did not provide an update on his condition after the game.

This does not look good!! Travis Konecny heads down the tunnel in obvious pain. It looked like a right hand/wrist injury. He did not come back out for the start of the 3rd. pic.twitter.com/tbZcIL9Kir

Taylor Hall would put the Flyers back on the power play with just 33 seconds remaining in the middle frame after he slashed Travis Sanheim, and the Flyers could not capitalize before the buzzer sounded after forty minutes.

Boston had gained a 22-13 lead in shots and snagged the game’s all-important first goal, and if the Flyers wanted a chance at upsetting the Bruins, they’d have to do so without their leading goal and point scorer.

They’d get another crack on the man advantage soon afterwards as Ullmark was whistled for interference against Morgan Frost. Like the previous power plays, no shots on goal and poor execution. Wash, rinse, repeat.

Just over two minutes after the Bruins killed off their fourth penalty of the game, Massachusetts native Max Willman high-sticked Connor Clifton to send Boston on their third power play of the night, and this time the Bruins made the Flyers pay.

After getting set up in the Flyers’ zone, Charlie McAvoy dished a pass to David Pastrňák, who one-timed a perfect slap pass to an open Jake DeBrusk on the doorstep to double the Boston lead at 2-0.

Just over two minutes later, McAvoy was sent off for interference on Zack MacEwen, and apparently the fifth time was the charm for Philadelphia on the power play.

Owen Tippett took all of seven seconds with the extra man to laser a wristshot by Ullmark through the traffic of Noah Cates, and the Flyers got on the board just before the halfway mark of the period and cut the Bruins’ lead in half.

While it seemed like things would swing in the Flyers’ favor after Tippett’s fourth goal of the season, David Krejčí and the Bruins responded just 16 seconds later with a goal of their own to restore their two-goal lead after an outstanding effort from Pavel Zacha to get the puck away from Ivan Provorov.

The Flyers would try their hardest to climb back into this one, but the Bruins held them at bay and just dominated as they usually do in front of their home crowd.

The frustration really culminated after Provorov tripped up Brad Marchand with 5:15 remaining in the period, and Boston sealed off any hopes the Flyers had at clawing their way back into the contest with another goal courtesy of Krejčí off another great Foligno pass to make it 4-1 with just over three and half minutes to play. For Nick Foligno, it was his 300th career NHL assist.

The Boston Bruins held off the Philadelphia Flyers late in the game and they’d win 4-1 to push their home record to 10-0-0, the second best start for a club at their home arena in NHL history. For the Flyers, it was their fifth consecutive loss and they are now 3-4-2 in away games this season as they continue their road trip.

The Flyers will head to Montréal for a Saturday night matchup at Bell Centre against the Canadiens, who will be hungry and looking to end a slump of their own after dropping their last two contests to New Jersey and Columbus.