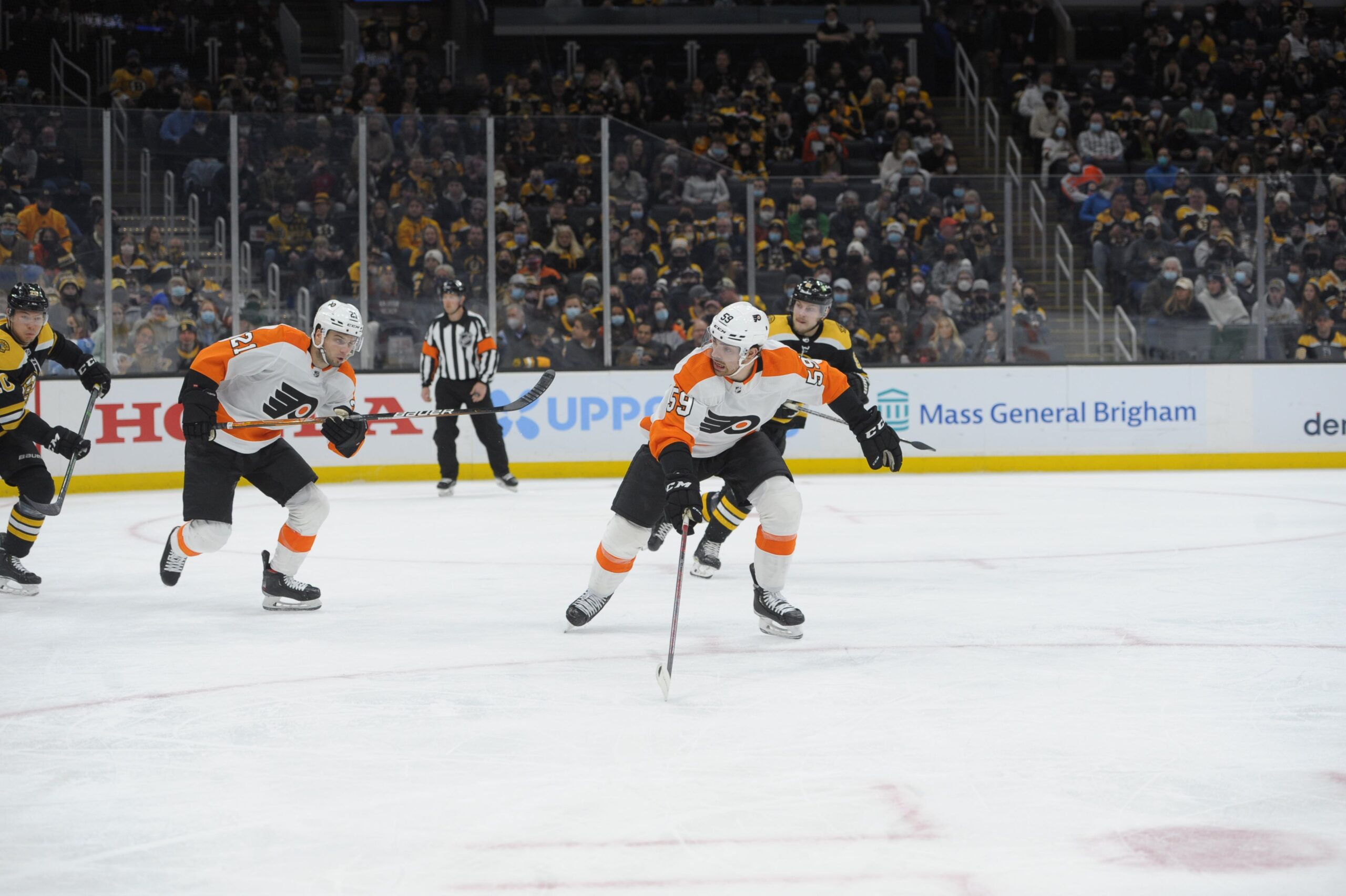 The Philadelphia Flyers’ winless streak was extended on Thursday night as they fell 3-2 to the Boston Bruins. After going winless in 10, then getting points in 7 straight, they have now lost 6 consecutive games (0-4-2). David Pastrnak recorded his 3rd career hat-trick against the Flyers and 11th overall, and Tuukka Rask returned to NHL action and recorded 25 saves for the win, as the Bruins dominated the Flyers in Boston, yet again. They’re now 13-0-4 in their last 17 games versus the Flyers in Boston.

With plenty of reinforcements returning to the lineup tonight in Claude Giroux, Travis Konecny, Ivan Provorov, Travis Sanheim, and Justin Braun, the Flyers were looking for a spark of any kind as they were winless in their 5 games. Not having played since Saturday night with their game on Tuesday night being postponed due to Covid, the Flyers’ common trend of not getting a registered shot on goal in the early parts of the game continued yet again.

The Flyers didn’t register their first shot on goal until the 9:19 mark of the first period and if that wasn’t bad enough, they were down 2-0 by that point, thanks to two early goals by notable Flyers-killer David Pastrnak.

Jackson Cates over-skated a possible clearing attempt as the original Bruins shot went well wide. Scott Laughton fought the puck away from Pastrnak and tried to make a simple defensive zone pass to Travis Sanheim, but he missed completely and a funny bounce off the boards allowed Erik Haula to find a wide open Pastrnak in the slot as he had no issues snapping one past Carter Hart to give the Bruins a 1-0 lead 1:51 into the game.

Off an unnecessary penalty by Nick Seeler, the middling Flyers penalty kill was tasked to thwart the dangerous Bruins power play, to which they were unsuccessful. With consistent pressure in the offensive zone and passing it around with ease, Charlie McAvoy received a pass from Pastrnak, settled the puck down and then fed it to Brad Marchand who had all the time in the world to make a play with the defense collapsing in front of Hart. Marchand found Pastrnak with a perfect fake-shot-pass and once again he made no mistake with an open net at his disposal to give the Bruins a 2-0 lead.

Having to kill another penalty, still without a shot on goal, the Flyers were able to successfully kill it off and finally get some offensive opportunities as they fired 6 shots in quick succession, as all their 6 shots came in a 5 minute span. With the chance to create some sort of momentum and cut the deficit in half, the Flyers found themselves on the power play and weren’t able to generate a shot on goal, let alone offensive time of possession.

Not having registered a shot on goal since Joel Farabee’s attempt with 5:02 remaining in the first period, even the ones they fired on goal were from the outside and never pressured Tuukka Rask, who was playing his first game since May. Zack MacEwen dropped the gloves with Tyler Lewington in the early stages of the second period to try and turn the tide for this club.

It might not have directly correlated to the MacEwen fight because the Bruins fired several shots on Carter Hart, but the Flyers were able to cut the deficit to one thanks to a power play goal by Cam Atkinson shortly after. It was a much better start to the man advantage than their first attempt and the second unit did a good job at cycling the puck around and making the Bruins move.

Ivan Provorov, on the second unit with Keith Yandle, playing the circles rather than the quarterback position, wrapped it around to Cam Atkinson who was behind the net. Atkinson, Morgan Frost, and Yandle quickly passed it around as they found Provorov whose shot was deflected by Cam Atkinson in front of the net to finally get the Flyers on the board.

Great eye by Atkinson for the first #Flyers goal of the night! pic.twitter.com/KLFu1iQgxQ

Feeding off their own momentum for the first time in the game, the Flyers were revving things up and trying to erase a sleepy 2-0 first period deficit. Joel Farabee, who has been extremely noticeable in the last several games, had a breakaway opportunity but couldn’t slip the puck through Rask’s five hole as he read it all the way.

Shortly after, Keith Yandle, playing in front of his hometown fans, found Farabee with a perfect stretch pass. Farabee then danced around the entire Bruins defense and instead of shooting off the rush, he passed it to Atkinson. The pass went off his skate and back towards Farabee, who was in the crease with an open net as the original pass took Rask away from the blue paint. Game tied.

Farabee with absolutely filthy mitts to tie up the game. pic.twitter.com/yWoP5RZpkw

Unfortunately, the Flyers’ momentum swing stopped there as they were called for two penalties 1:13 apart. On the ensuing 5 on 3 advantage for the Bruins, David Pastrnak recorded another hat-trick against the Flyers. Off the face-off win, the Bruins quickly set up and Pastrnak’s first attempt was blocked with several diving bodies in front of Hart. The Flyers fail to clear the puck as McAvoy was able to corral the clearance. He then set up a Pastrnak slap shot that Hart had no chance in saving to give the Bruins a 3-2 lead.

With one more penalty still to kill off, the 5 on 4 advantage for the Bruins had chances for both teams as Atkinson found himself on a breakaway after the Flyers forced a McAvoy turnover. All alone, Atkinson tried a backhanded move on Rask, who once again read it all the way. The Bruins came back down the ice and it was none other than Pastrnak who had 2 high danger scoring opportunities. One chance went wide while the other was stopped by Hart; one of 29 fired on net by the end of 40 minutes for the Bruins.

Heading into the first commercial break of the third period, it was all Carter Hart; mostly good, some bad. The shots were 7-2 Bruins in the first 6 minutes and they had several scoring chances that Carter Hart thwarted. However, a lot of those scoring chances were caused by Hart’s sloppy puck handling in and around the net, however luckily he was playing out of his mind to stop all the chances thrown his way.

Forcing a turnover in the defensive zone, the Flyers’ Kevin Hayes took matters in his own hands as he nearly went end to end before sending a perfect pass to Zack MacEwen in the slot. MacEwen’s attempt to tie the game hit the post as the Flyers, whose shot count was being doubled, had a glorious opportunity to tie the game late. MacEwen came close again after the commercial break but the play was called off due to a hand pass.

The scoring chances continued for the Flyers as the top line of Farabee-Giroux-Atkinson started peppering Rask but he had all the answers. With all the pressure coming from Philadelphia, they were able to force the Bruins into a daunting delay of game penalty with 7:55 remaining in the third period.

Like the Flyers in the second period, the Bruins took another penalty and handed the Flyers a glorious 5 on 3 opportunity for 51 seconds with another delay of game call. Unfortunately for the Flyers, they were held to the perimeter and weren’t able to create any chances. The ensuring 5 on 4 advantage played out the same way as the 5 on 3; few and limited chances in a very pivotal point of the game.

With 3:46 remaining in regulation the Flyers and Mike Yeo pulled Hart in yet another attempt at tying the game. The 6 on 5 advantage resembled their failed power play opportunities as they had offensive zone time but were kept to the perimeter, lots of shots that went high and wide, and the few that hit the net were right on Tuukka Rask or they had very little space to actually whack it in the net.

Considering the very early deficit, it was a valiant effort in some senses but if it wasn’t for Carter Hart’s goaltending down the stretch, the 3-2 final score could’ve been 5-2 or much worse. The failing power play has reared its ugly head yet again as they’re still unable to take advantage of 5 on 3s, can’t seem to create high danger chances with the extra skater, and most of their shots are from the perimeter.

Carter Hart made 33 saves, Tuukka Rask made 25 saves in his return to NHL action, and David Pastrnak scored all 3 goals for the Bruins, while Cam Atkinson and Keith Yandle recorded multi-point efforts for the Flyers.

Next up for Philadelphia are the New York Rangers on Saturday at 7:00pm at Wells Fargo Center.