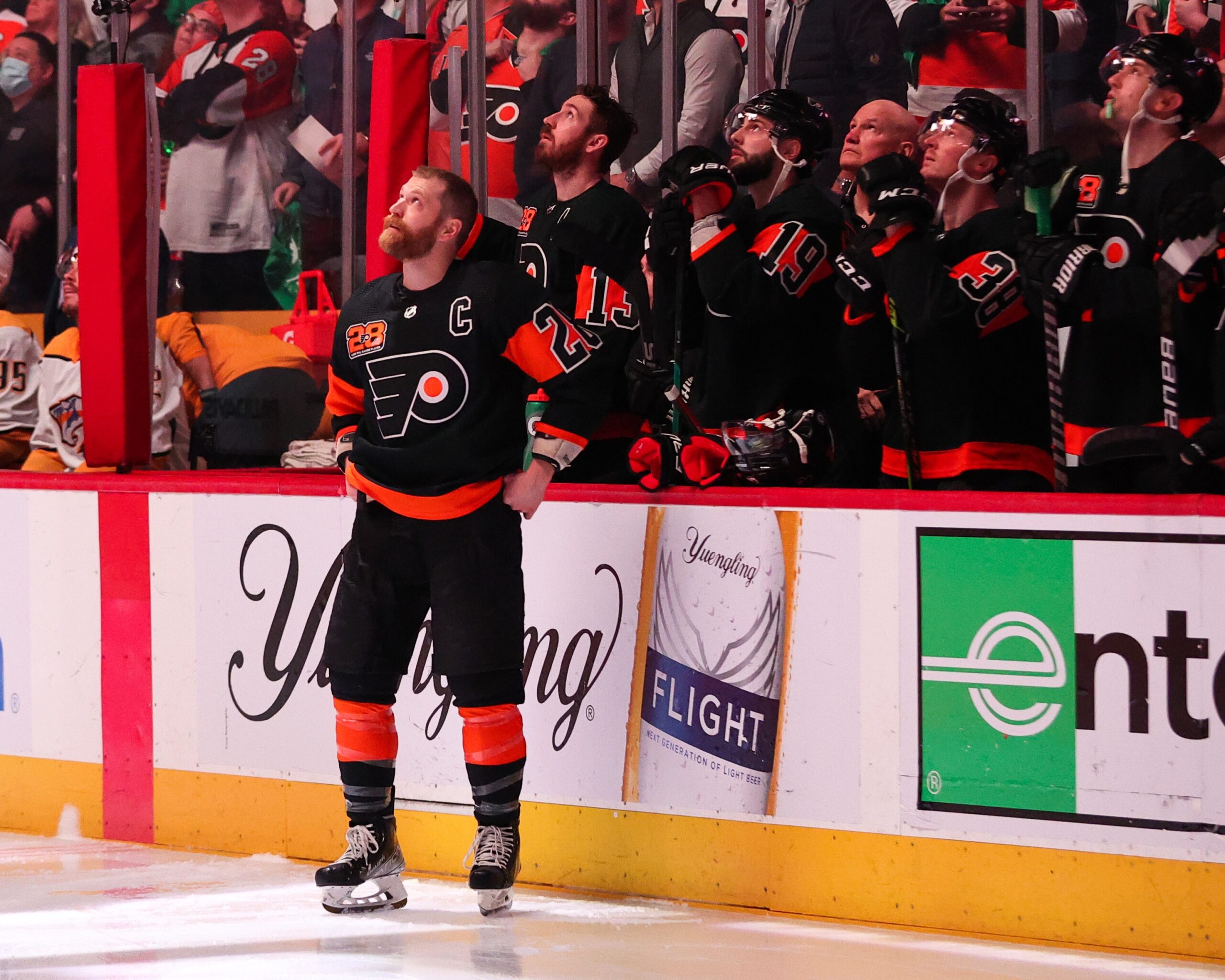 The Philadelphia Flyers capped off a comeback victory late in the third period to down the Nashville Predators, 5-4. Down 4-3 with less than 5 minutes to go, Kevin Hayes and Joel Farabee scored within 3 minutes to give Claude Giroux’s 1000th game even more significance. After a great pre-game ceremony, the Flyers came out firing in the first 30 minutes. They lulled a little in between but found another gear in the latter half of the third period to regain momentum after a few calls went against them and held on at the end for a much-needed victory.

With trade rumours heating up by the day as the trade deadline approaches, a great pre-game ceremony for the captain’s 1000th game in the Orange and Black, and a raucous and (finally) jam-packed Wells Fargo Center; a win for the captain would’ve been a nice swan song if this was indeed his last game.

The Flyers started off the game by giving up a great scoring chance to the Predators’ Colton Sissons, but Carter Hart was able to slide over just in time to shut down the one-time opportunity. The Flyers then went on the offensive and created not just one but five scoring chances with Juuse Saros standing ground early. Before the first commercial break, Carter Hart was tasked to make a few more standout saves as the game had an aggressive and fast-paced feeling.

Off the ensuing face-off after the break, Zack MacEwen dropped the gloves against Michael McCarron, for the 39th fight of the season for Predators. MacEwen took care of McCarron rather quickly and pumped up not only the crowd but his team as well, as Travis Sanheim got the Flyers on the board in short order. After Cam Atkinson forced a turnover from former Flyer Nick Cousins, just inches away from the Predators blue-line, Kevin Hayes’ shot was stopped, he re-gained possession and swung it towards the net. It deflected off a Predators stick and landed right to Sanheim who made no mistake in finishing off the play for his 5th goal of the season.

Hayes and Sanny give the boys an early lead pic.twitter.com/evKoLLbQMM

The Flyers were then awarded 2 power plays in quick succession with the first one creating a few scoring chances but the second one being mitigated by a Claude Giroux penalty. Unlike any game this season, or at least in the last 3 months, the Flyers played aggressively and with gumption for the entirety of the first period.

They created chances, they were robbed on several, and they were physically apparent. They played similarly well in the first period against the Montreal Canadiens on Sunday, but completely fell flat in the second and third periods. However, with the captain possibly playing his final game, the Flyers looked locked in. With a minute to go after forcing another turnover in the Predators zone, Derick Brassard’s slap shot hit the cross-bar. The Flyers out-chanced the opposition 15-6, outshot them 17-11, and most importantly outscored them 1-0.

It only took the Predators 23 seconds to tie things up in the second period after a turnover in the defensive zone lead to an open opportunity for Tanner Jeannot, who scored his 20th of the season. Ivan Provorov dumped a pass off the boards to Travis Konecny who was cross-checked by Colton Sissons. He pushed the puck further ahead to Jeannot, who ripped a shot top shelf over the glove of Carter Hart.

The Predators took another penalty shortly after giving the Flyers an opportunity to squash their momentum and re-take the lead. It took the Flyers 9 seconds to set-up and score as Cam York finished off some nifty passing and got the puck past an outstretched Saros. Rasmus Ristolainen fed a pass to Joel Farabee who quickly got the puck to Konecny at the front of the net. He tried passing it to Hayes in the slot but it deflected off a Predators skate and right to an open York, who had quite a bit of net to shoot at for his 2nd of the season.

2 minutes and 26 seconds later the Flyers scored yet again as they continued to pepper the defense and Saros. Ristolainen used his body to win a puck battle and got the puck in deep behind the net. Cam Atkinson was centered a pass in the blue paint that Saros initially stopped but mayhem ensued as everyone was either falling down in front of the goaltender or whacking away at the loose puck. The puck found its way out of the scrum and right to James van Riemsdyk who roofed it past the lain down goaltender. The Predators were thinking about challenging the goal for goaltender interference but thought against the idea.

JVR gets the greasy goal to extend the Flyers lead! pic.twitter.com/4k3iLWEy7h

It might’ve been the right call regardless since former Flyer Phil Myers cut the deficit in half by scoring his first goal as a Nashville Predator, only 1:28 later. The Predators were swarming in the offensive zone firing at will, and Myers’ shot, one that didn’t look too threatening, found its way through Hart’s arm and an excited celebration followed for the young defense-man. Roman Josi was skating circles in the offensive zone, firing shots, gathering passes, he finally brought over a couple Flyers with him before sending a spin-around pass to the unmarked Myers.

Colton Sissons and the Predators continued playing their overtly-aggressive style as he was called for a high-sticking penalty 47 seconds later. The Flyers power play has looked a lot better since they inserted Cam York and Rasmus Ristolainen on the second unit but they weren’t able to double their lead. Zack MacEwen was then called for a tripping penalty on Nick Cousins a few minutes later as the 9th ranked power play finally got their chance at a full length power play but to no avail.

With 4:52 remaining in the middle frame, Travis Konecny was called for a double-minor high-sticking penalty. He tried making a defensive play by poking at the puck but in-turn his stick ricocheted off Dante Fabbro’s stick and clipped him on the nose. The Predators tied the game only 57 seconds into the double minor as Ryan Johansen re-directed a Mikael Granlund pass in the slot over the glove of Carter Hart. With the Predators scoring early enough, they still had a full 2 minute power play but the Flyers were able to kill it off.

Shades of Montreal started appearing near the end of the second period as the Predators started to pull ahead, especially with chances and momentum. Heading into the third period tied, the Flyers needed to replicate their first period but that was quickly negated as Filip Forsberg gave the Predators their first lead of the game, only 1:11 into the period.

Roman Josi was once again behind the goal as he brought about several Flyers behind the net. There was a mini-scrum in front of Hart, as he himself was on his stomach, as Forsberg scored the goal with a through-the-leg move. All 5 Flyers were caught in and around the blue crease but none of them could get the puck away from Forsberg, as he tied David Legwand for first in franchise history in goals.

With 8:28 remaining in the third period, Carter Hart made a relatively easy save as a shot went straight into his breadbasket as he held on for the whistle. He leaned over and fell to his side in pain, which prompted a short stoppage and Jim McCrossin having to check in on the young goaltender. Upon video replay, Hart was hit in a rather uncomfortable spot but he was able to shake it off and continue playing.

Less than 2 minutes later, the Flyers seemingly tied the game up as Derick Brassard was able to whack away at a James van Riemsdyk one-time shot in the paint. Cam Atkinson high-sticked the puck right before, a play that led to the Flyers’ tying goal, however a new rule was instituted this year where a head coach can challenge a missed stoppage. John Hynes used his challenge successfully and the goal was disallowed, keeping the score at 4-3.

Here’s the scoring sequence, but Nashville is challenging an uncalled high-stick that kept the puck in play and led to the goal. pic.twitter.com/53v7uO0Ncv

With 5:43 remaining in regulation, the Flyers had a golden opportunity to tie things up (again) as they were awarded a power play after Mattias Ekholm was called for a hooking penalty. As we came back from the commercial break, it was changed to a 4 on 4 as Joel Farabee was called for holding the stick. 1:28 into the 4 on 4, the Flyers legally tied the game as Kevin Hayes was awarded the goal after Ristolainen went end to end to make the play.

The great hustle from Risto leading to the tying goal pic.twitter.com/tbeWGVQWSH

As Ristolainen entered the zone, he swerved towards the boards to protect the puck and then sent a pass into the crease for a streaking Hayes. The puck hit Hayes’ skate and found its way past Saros as the Flyers were able to keep their momentum going after a few hiccups went against them.  To cap off the late comeback, Joel Farabee was left unmarked and with a wide-open net to tuck home the game-winning goal. Travis Sanheim, who was evident all game, went around the net and found Kevin Hayes in the corner. Hayes had to gather the pass, turned around and whipped a pass to Farabee as the Flyers re-gained the lead with only 1:19 remaining.

With 24 seconds left, Patrick Brown attempted a lengthy empty net goal but it went against him as it was called for icing. The Predators called a timeout and right away set up, aided by a failed clearance, and Hart was forced to make a big save but the Flyers were able to clear the fort and hold on for the win and cap off Giroux’s 1000th game with a big comeback victory.

The Flyers are right back at it again tomorrow night when they take on the Ottawa Senators north of the border.

We have a game tonight, but we love you, G
Giroux-less Flyers visit Ottawa amid trade rumors for tilt with Senators