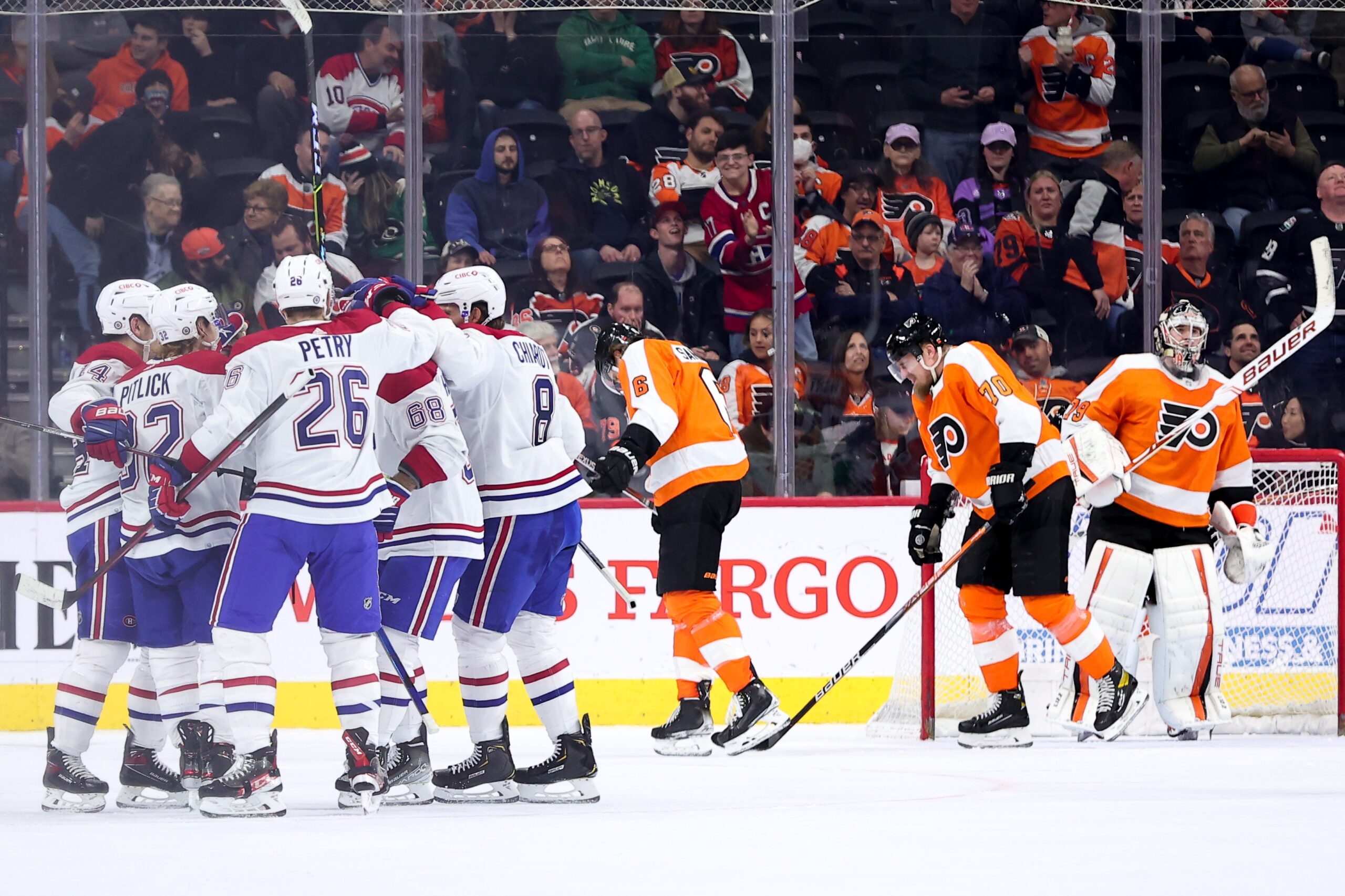 Flyers blow another third period lead, lose in overtime to the even lower Canadiens

The Philadelphia Flyers seemingly had this game in the bag, especially with a power play being awarded to them with one minute to go in regulation. But Rem Pitlick was the hero as he scored the game-tying shorthanded goal and then set up Cole Caufield’s slap-shot game-winner by forcing a turnover on Morgan Frost and Joel Farabee.

The Canadiens completed the comeback in short order as they took advantage of very sloppy plays all game but primarily on the final two goals. Claude Giroux scored his 900th career point and passed Eric Lindros for 8th place in franchise history in goals, while Carter Hart stopped 31 of 35 shots; doing what he could until the untimely collapse.

If there was ever a game for the Flyers to score more than 1 or 2 goals, it would have been tonight against the even lower Montreal Canadiens and Samuel Montembeault. Coming off a shootout loss last night against the Seattle Kraken, it only took 20 seconds for the weary Canadiens to give the Flyers that opportunity as Mike Hoffman was called for a slashing penalty. The 30th-ranked power play was going up against the 29th-ranked penalty kill and even though the Flyers didn’t score, they actually had several shots on goal and even a few scoring chances.

Montembeault and the Canadiens were looking very shaky to start and the Flyers pounced early with a Kevin Hayes goal to open things up. Starting from the defensive zone after Travis Sanheim forced a turnover off the stick of Jeff Petry, James van Riemsdyk jumped on the loose puck and set out on a 3 on 2. He passed it to the trailer in Sanheim, who quickly fed the puck to Hayes as he slammed it past Montembeault for his 4th goal of the season.

Justin Braun was called for a holding penalty shortly after as the Montreal Canadiens and their 31st-ranked power play was put up to the task to try and tie things up. The Flyers and their 25th-ranked penalty kill gave up a few testers but Carter Hart kept his ground and stopped them all with relative ease. Cam Atkinson forced a turnover near the end of the penalty kill but blasted his slap-shot well over the net.

The Flyers finished the period strong with scoring chances from players like Gerry Mayhew, Justin Braun, and Morgan Frost, but they missed the net, which was the sole issue with the Flyers after 20 minutes. Travis Konecny had the best chance outside of the Hayes opening goal, as he darted in the blue paint with aggression but was stopped by the pad of Montembeault. The Flyers should’ve been relatively happy with their first 20 minutes as they headed into the locker room up 1-0 but down in the shot total 11-9; a case of creating the better chances with more offensive zone time but couldn’t hit the net on a lot of them.

1:09 into the second period, Claude Giroux was called for a tripping penalty to give the Canadiens a chance to tie things up early. Nick Suzuki did just that as his shot from the face-off dot hit Hart’s blocker and deflected into the net. Not much was happening in the first 60 seconds but some nice, quick, and concise passing from Chris Wideman and Cole Caufield culminated into Suzuki’s 15th of the season.

Less than five minutes later, Claude Giroux gave the Flyers the lead, scoring in his 999th game as a Flyer and passing Eric Lindros for sole possession of 8th place in franchise history in goals. Braun dumped the puck into the zone for Montembeault to fetch but he held onto the puck too long, so much so that he confused Jeff Petry. Travis Konecny dug the puck loose and sent a pass to Morgan Frost for a quick one-touch pass to Claude Giroux. Giroux was able to get the puck past the out-stretched leg of the goaltender for his 18th goal of the season, which also represented his 900th career point.

As the Flyers have done all season, they conceded a goal shortly after scoring one themselves. Only 1:09 later Suzuki scored his second goal of the period to tie things up. Wideman and Hoffman played a little give-and-go before getting the puck to the streaking Suzuki. He skated past Rasmus Ristolainen, took a shot from the corner, and then followed his own rebound to get one past Hart’s glove in the slot. Derick Brassard was the closest Flyer to the puck but he was pre-occupied with a Canadiens player, which allowed Suzuki to find his rebound and score.

After some end-to-end hockey from both teams, the Canadiens found themselves back on the power play after Sanheim was called for a hooking penalty after over-skating a Ristolainen slap-shot that went wide. The Flyers were able to kill the penalty after a few scoring chances in and around the goal mouth from the Canadiens were stopped and covered by Hart.

Brassard was called for a tripping penalty with 1:19 remaining to culminate a terribly played period. With 12 seconds left, Mike Hoffman was stopped from the right circle after dangling through Joel Farabee. A scrum ensued right after the whistle was blown as Ristolainen bodied Brendan Gallagher in the blue paint. At the end of 2 the shots were 21-16 for Montreal as they also held a 4-1 advantage in power plays.

After killing off the remaining 41 seconds of the Canadiens man advantage and surviving a couple Canadiens odd man rushes, Cam Atkinson and the Flyers re-took the lead with a one-time finish near the goal-mouth only 2:41 into the final period. Off a defensive zone face-off loss, the Flyers gained possession of the puck after a block shot set the puck free. Joel Farabee carried the puck into the zone before losing it near the blue line. Luckily the puck bounced towards Brassard, who fed it back to Farabee and then after making a move got the puck to Atkinson for a one-time finish. Atkinson’s team-leading 22nd goal gave the Flyers their third lead of the night.

After taking the lead early in the period, the Flyers seemingly sagged as the Canadiens took control for most of the next 10-12 minutes that proceeded. The Flyers could only get the pucks in deep as the Canadiens clogged up the neutral zone and hurriedly transitioned from defense to offense. Carter Hart had to step up with several huge stops as he had done on Tuesday night against the Vegas Golden Knights.

With the Flyers really having to close things out for the potential victory, the final five minutes were a lot better for Philadelphia as they really made things difficult for the Canadiens to enter the zone, let alone get past the neutral zone. Active sticks and voracious dump-ins and clearances aided the Flyers as the clock kept ticking away. With Montembeault heading towards the bench for the extra attacker, Derick Brassard intercepted a pass and attempted a lengthy clearance-goal but it rolled just wide for icing.

With a minute to go in regulation, Farabee was interfered with near the blue-line as Chris Wideman stuck his leg out to impede the forward’s progress as Hoffman was looking to make a play. Initially the referees didn’t call a penalty but blew the whistle as Farabee was on the ice in pain. The referees conferred with each other after the whistle was blown and assessed the defenseman a five minute major before reconvening because of the seriousness of a major penalty. Finally, several minutes later, the referees concurred and assessed Wideman a two minute minor penalty for interference.

The Canadiens tied the game up with a shorthanded goal only 18 seconds later after Ristolainen initially made a good defensive play on an intended Petry pass. With the defenseman down behind the net, the Canadiens found the loose puck and turned it back into the blue-paint for a one-time finish from Rem Pitlick. The Flyers couldn’t control the puck or set up in the initial stages of their man advantage, which allowed the Canadiens to counter and tie things up. With not much time left, the Flyers very nearly finished the game in regulation with mayhem in front of the net but Montembeault had to make a few saves to send things to overtime.

The Flyers entered overtime with a minute of power play time but couldn’t do much with the opportunity. With 3:50 remaining in overtime, they returned to 3 on 3 play after a quick whistle after the power play had ended. Bidding for his 12th career overtime winner, Giroux won the face-off and took a shot off a designed play that surprised the goaltender.

However, it was Cole Caufield who got the last laugh as he ripped a slap-shot past Carter Hart to complete the comeback and take the 2 points. Morgan Frost’s intended pass to Farabee hit him in the back of the skates only for Rem Pitlick and the Canadiens to counter off the turnover. With Hoffman heading to the bench for a change, Caufield jumped on the ice and ended the game with a slap-shot from the face-off dot.

The Flyers will have a short break before hosting the Nashville Predators on Thursday night in what will be Claude Giroux’s 1000th career game.

Flyers seek to best Montreal in mid-season rematch
We have a game tonight, but we love you, G