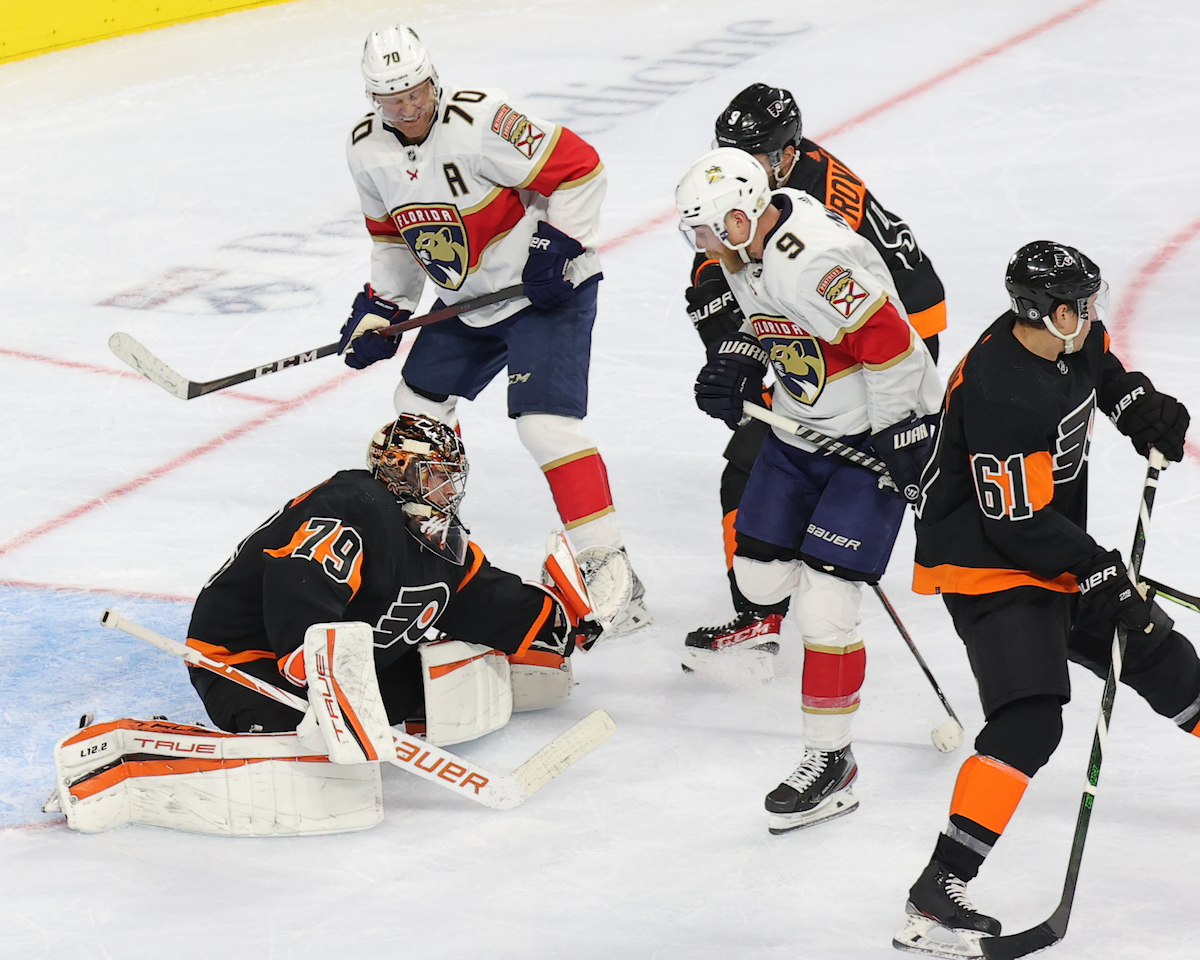 If there was ever going to be a silver lining from your most disappointing loss of the season, it’s the fact that you get to rectify your mistakes the following night.

After playing their worst game of the season on Tuesday night against the Tampa Bay Lightning, the struggling Philadelphia Flyers (8-6-3) face off against the NHL’s best in the Florida Panthers (13-2-3).

The Flyers from the onset looked horrible. The first period stats might paint a different picture but they never tested Andrei Vasilevskiy. Everything was coming from the outside, they would dump the puck in only for it to land on a Tampa Bay player’s stick, and the Lightning absolutely dominated the final 40 minutes.

Once again, Carter Hart was left to fend for himself as he did his best to keep the Flyers within striking distance but once it became 3-0 near the end of the second period, the game was all but over. The Flyers continue to struggle in the goal scoring department and it only gets worse with Derick Brassard leaving the game early in the first period.

Already without Kevin Hayes, Wade Allison, and Ryan Ellis, the Flyers’ depth is going to be truly tested if Brassard is to miss a significant amount of time. This was the beginning of 6 games in 9 nights and the schedule only gets more ominous by the game. They have scored 27 goals in their last 14 games and 18 goals in their last 11, including being shut out 3 times in that span.

The last time these two teams faced off was at the beginning of the season where the Panthers came in red-hot and unbeaten. The Flyers were finishing off their homestand, having defeated the Seattle Kraken 6-1 and the Boston Bruins 6-3. Florida defeated the Flyers 4-2 in the contest to close out the homestand. Fast forward to today and the Panthers still remain red-hot and the Flyers have turtled into oblivion.

CATS ON THE PROWL

Not only are the Panthers tied for first place in the NHL with the Carolina Hurricanes, who the Flyers play on Friday, but they’ve won their last 3 games and are unbeaten in regulation in their last 5. After thoroughly dominating the New York Islanders (6-1) and then getting spectacular goaltending from Spencer Knight against the New Jersey Devils (4-1), the Panthers staved off a comeback from the Minnesota Wild, holding them to a 5-4 victory.

Goaltender Sergei Bobrovsky remains unbeaten in regulation with a 8-0-2 record alongside a sparkling 1.99 GAA and .937 save percentage. He is most likely in line to start the game against the Flyers as he holds a 15-5-1 record against his former club.

Without the services of Aleksander Barkov, who remains week-to-week with a knee injury, the Panthers received goals from Frank Vatrano (2), Owen Tippett, Sam Bennett, and Carter Verhaeghe. The game was 4-2 with under a minute to go when the Wild countered with a goal of their own, only for Sam Bennett to score an empty netter 9 seconds later. The Wild added another one with the extra man but it was too little too late as the Panthers were able to hold on for their 13th win in 18 games.

The Panthers rank 2nd in the NHL in goals per game at 3.94, and it’s no mystery since Jonathan Huberdeau leads the team with 12 assists and 18 points. Barkov has 9 goals and 17 points, Anthony Duclair has 9 goals and 16 points, Aaron Ekblad has 10 assists and 15 points, Carter Verhaeghe has 6 goals and 15 points, and Gustav Forsling has 11 assists. The prize of their offseason, Sam Reinhart, has seemingly had a slow start to this Panthers tenure with 3 goals and 11 points in 18 games.

The Panthers have 9 players in double digit points and 3 on the cusp, while the Flyers only have 4 with several of their top players mired in long droughts. Claude Giroux still leads the team with 16 points, and Sean Couturier has 13 points but only 1 point in his last 7 and only 1 goal in his last 8.

Goaltending has been the silver lining for the Flyers as Carter Hart and Martin Jones have done their parts in goal. However, on the other side of the ice, the Panthers have a formidable duo of their own in Bobrovsky and rookie net minder Spencer Knight, who is coming off the heels of a 45-save performance against the Devils.

The Flyers have now lost three straight games after starting the season 6-0-0 coming off a loss. They have had a rough schedule to deal with and it’s only going to get tougher with the Hurricanes on deck. They also have divisional games against the New Jersey Devils, New York Islanders, and New York Rangers right after.

Getting back to the basics is the only thing the Flyers can do at this point to break out of their drought because they don’t have reinforcements and any move will be tough to complete due to cap restraints and the league standings being so tight at the moment.

The Flyers will be without the services of Kevin Hayes, Patrick Brown, Ryan Ellis, Derick Brassard. The Flyers recalled Morgan Frost from the minors under emergency conditions this afternoon in the wake of Brassard’s absence.

Their depth has been tested all season and with a short roster on the road, the Flyers had no other choice but to delay the developmental route of Frost and bring him up to the NHL level immediately.

The Panthers will be without Barkov as well as Noel Acciari, Markus Nutivaara, and Olli Juolevi. Bobrovsky is in line for the start and Martin Jones will most likely get the nod tonight on the heels of a back-to-back.

The Flyers have not officially announced what the lines will look like for tonight, but if Frost simply just replace’s Brassard’s spot without much shuffling, this would be what it turns out as. Lineups subject to change.