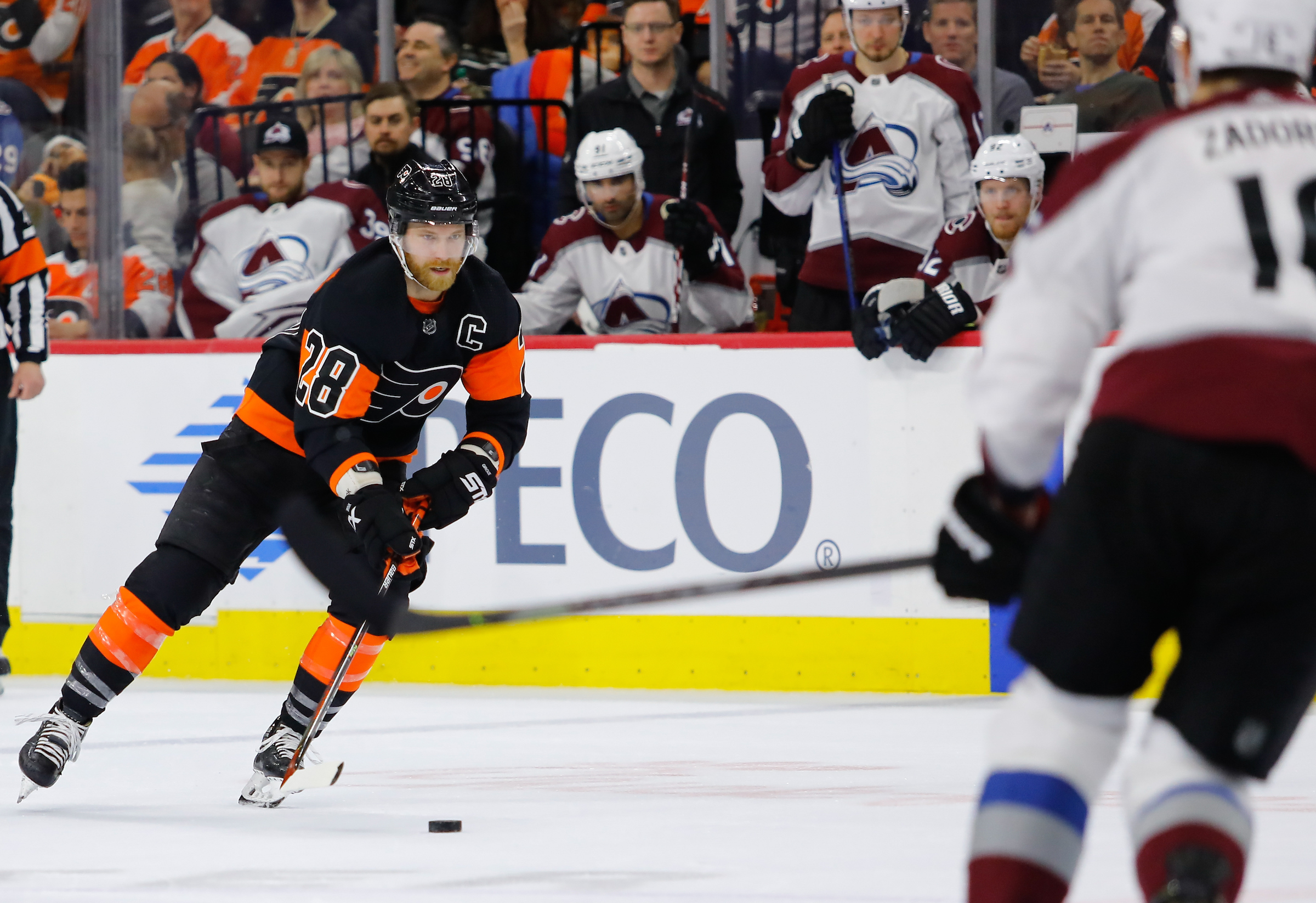 Could Claude Giroux be on his way to the Colorado Avalanche?

With Claude Giroux’s availability at the trade deadline still up in the air, that hasn’t stopped the Colorado Avalanche (and several other teams) from inquiring and even sending trade offers. The Flyers captain holds a no-movement clause and has mentioned a few times that he’s still unsure himself. With the Flyers falling game by game and one of the top Stanley Cup contenders calling with serious interest, it will be interesting to see how this one plays out.

The Avalanche have knocked on the door before and after the All-Star break and it’s no surprise to the Flyers, Giroux, or the NHL. On top of the Avalanche having serious interest, the Toronto Maple Leafs, Boston Bruins, and Carolina Hurricanes have been mentioned as serious suitors for the Flyers captain. The rumour mill has it that the Avalanche, at some point in time, have offered Tyson Jost and a first round pick for Giroux.

He is currently tied with Cam Atkinson for the team lead in points with 36 but in 3 less games, has the second most goals behind Atkinson with 15, and leads the team with 21 assists. 36 points in 43 games aren’t necessarily eye-popping figures but when you figure in how bad the Flyers have been, the mish-mash lineups that have been put on the ice, and the constant changing of line mates; it’s incredible that he is still producing at this level.

Adrian Dater, who is an Avalanche insider and writes for Colorado Hockey Now has been tweeting quite a bit lately with several interesting tidbits of information regarding the Flyers-Avalanche potential swap, who the Flyers are interested in, and what the Avalanche see in Giroux.

One of things Avs really like about Giroux, I’m told, is his grit and snarl, in addition to his obvious skill #Girouxwatch

For a lot of people out there, this may be hard to believe, but according to Dater the Avalanche really like Giroux’s girt, snarl, and obvious skill-set. They are also a team that is in the lower echelon of face-off wins with 47% (3rd last in the NHL) success rate and bringing in Giroux’s 60% success rate would be a massive boon. Giroux’s grit, determination, and leadership has come into question several times in recent months, let alone years, but the Avalanche see him in a completely different light.

It was initially believed that the Flyers were interested and asking for Alex Newhook, the 21 year-old former first round pick in 2019. He was drafted 16th overall in 2019, had 102 points in his draft year with the Victoria Grizzlies of the British Columbia Hockey League, and in 2 years with Boston College he recorded 58 points in 46 games. He is currently playing in the NHL with 10 goals in 35 games. The Avalanche, as we know of right now, have him as an untouchable.

The Flyers and their scouts have been present during Colorado Avalanche games, just as recently as Thursday night’s game against the Tampa Bay Lightning. Daniel Briere, newly named special assistant to the general manager, was watching and scouting the game, keeping a tab on certain players like Tyson Jost and J.T. Compher.

Jost, a former first round pick in 2016, has been mentioned in several rumours and trade offers as the player the Avalanche are most okay with giving up in a Giroux trade. Newhook and Bowen Byram are players the Flyers are surely pressing for but the odds of either of them being moved at the trade deadline for a rental are astronomically low. Jost is still only 23 years old, has played in parts of 6 seasons, and has amassed 101 points in 307 games. He hasn’t necessarily lived up to the hype of a 10th overall pick, but playing mostly in the bottom 6 of a good team isn’t going to give you the opportunity to shine offensively.

Compher’s name has also been involved in the rumour mill. The former second round pick of the Buffalo Sabres in 2013 has also spent parts of 6 seasons with the Avalanche, totaling almost similar stat-lines as Jost. He has scored 61 goals and 125 points in 304 games, having scored 10+ goals on 4 separate occasions, and has also mostly featured in the bottom 6.

The cream of the crop in terms of available prospects would be Justin Barron and Sampo Ranta, the latter being someone the Flyers are enamoured with. Barron is a right hand shooting defenseman who was a late first round pick in 2020. He sagged a little in his draft year, which explains why he was taken near the end of the first round but finished the pandemic shortened 2020-21 season on a high. He recorded 31 points in 33 games with the Halifax Mooseheads before playing 7 games in the AHL with the Colorado Eagles, where he tallied a goal and 4 points. This season he has played 29 games in the AHL and 2 in the NHL, tallying 4 goals and 15 points with the Eagles. He also represented Team Canada at the World Junior Championships in 2021, where he helped Canada win the silver medal.

Ranta was a third round pick in 2018, after playing some good hockey with the Sioux City Musketeers of the USHL. He later enjoyed steady success in the Big 10 with the University of Minnesota where his point totals jumped from 16 to 20 to 31 in 36, 35, and 31 games respectively. Ranta has played in parts of 2 seasons with the Colorado Eagles, totaling 10 goals and 17 points in 43 games. He represented his native Finland at the U18 World Championship in 2018, where he won gold, and finished in 4th place at the World Juniors in 2020.

Normally that could be seen as an issue, but it might be a blessing in disguise for the Flyers because it is believed that the 2022 NHL Draft isn’t supposed to be loaded or stacked with excellent talent. In fact, the 2023 NHL Draft is believed to be the better of the two and possesses far better young talent. So receiving picks, especially a first round pick, in a better draft sounds like a recipe for a good trade.

The only hiccup, a minor one at that, is making the money work because the Avalanche have about $1 million in cap space. The Flyers will most likely be eating half of Giroux’s $8.25 million AAV, but even then the Avalanche would be $3 million over the cap. If the Flyers are interested in a player like Compher and/or Jost, they are costing the Avalanche $3.5 million and $2 million respectively this year and the year after, which would work out financially.

An example of a deal that could be in the works is Compher, a prospect like Barron or Ranta, and a 2023 first. It involves the players that both teams have been talking about and it works out financially, but it remains to be seen if the Avalanche want to part with a package like that and if the Flyers would be willing to take on said package. Forgetting the most important aspect of a Giroux trade; if he’s willing to waive his no-movement clause.

For now the rumour mill will be rolling along, scouts are present from both teams at either team’s games, and trade offers have been sent and discussed about. It remains to be seen what will transpire but with the Flyers free-falling in the standings and as a Giroux supporter, it would be nice to see him go to a contending team that actually has a legitimate shot at winning the Stanley Cup.

For those wanting to see Giroux return next season, a win-win situation could be a trade at the deadline, where the Flyers could re-coup several future assets and then sign him in the summer. The Avalanche and several other contending teams that are interested in his services wouldn’t have the necessary cap space or willingness in the summer to extend him to an extension.

The Avalanche especially won’t, when they have Nathan Mackinnon, Nazem Kadri, Darcy Kuemper, Andre Burakovsky, Valeri Nichuskin, and Pavel Francouz all with expiring contracts at the end of the season while also re-signing Gabriel Landeskog and Cale Makar to big money deals last summer. We also know that the Flyers are trying to remain aggressive moving forward and how much they value the captain and what he has done and is still doing for the franchise. So it might not be the most far-fetched idea.