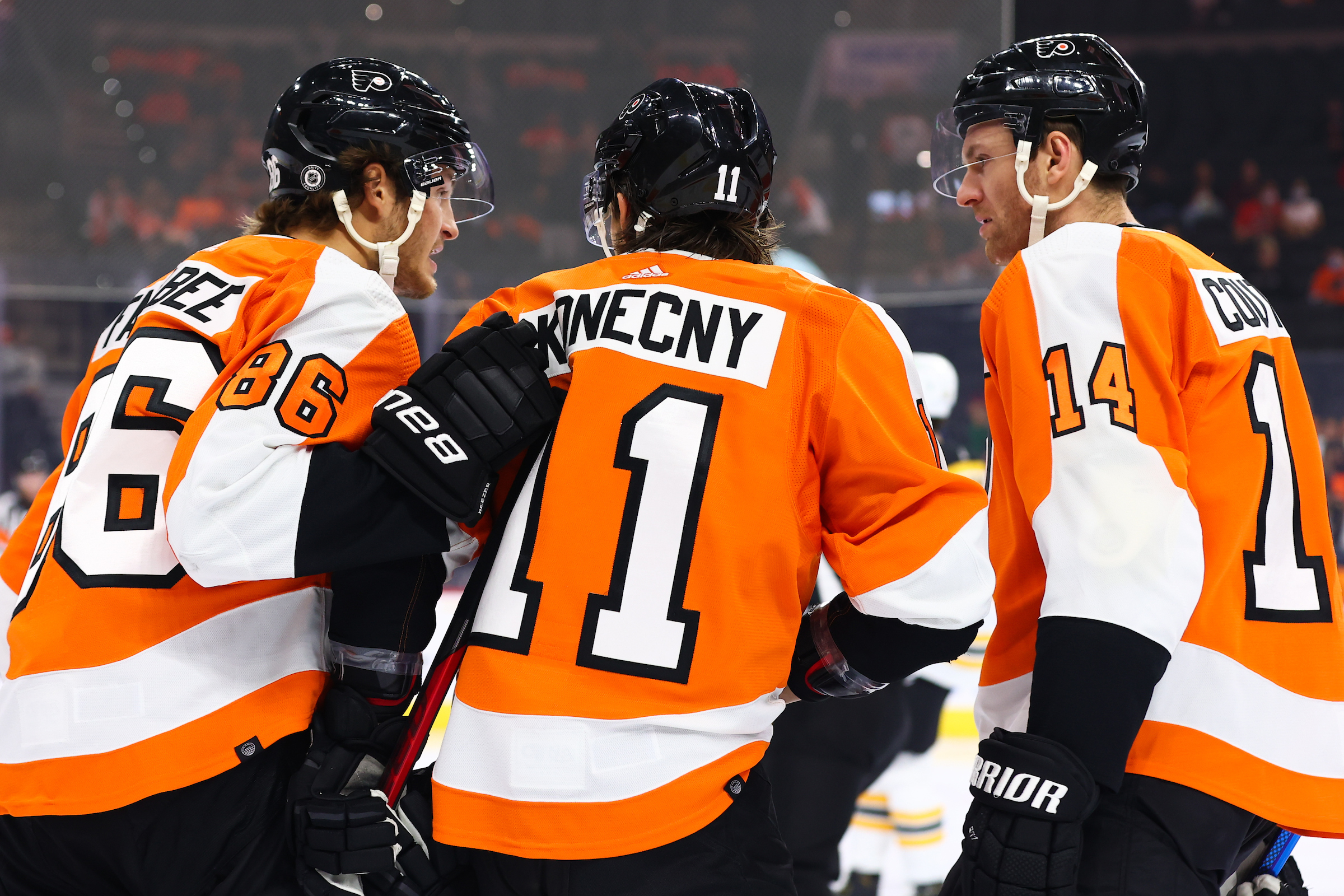 Predictions and projections ran rampant during the off-season after all the moves and changes the Philadelphia Flyers pulled off. Being mediocre for well over a decade has the city, the fans, and the team alike ready to finally break loose and become the once-successful team they were for so many years. After losing their first game of the season in the shootout to the Vancouver Canucks, it’s time to make some way too early reactions.

The ultra-talented goaltender had the hockey world in flux last year after his disastrous season. A lot was said about his play and whether or not he’d be able to turn things around, even though he’s only 23 years old. The Flyers’ revamped defense was supposed to mitigate a lot of last year’s goaltending issues and we saw that in flashes on Friday.

It was a tale of two games for Carter Hart as he allowed 4 goals on the Canucks’ first 17 shots. He followed that up with 22 consecutive saves in the third period and overtime, including some very big saves in the extra frame.

The first goal by the Canucks’ Vasily Podkolzin was a rocket top shelf, however Keith Yandle overcommitted to the same player that Nick Seeler was covering and Carter Hart went down way too quickly. Goals 2 to 4 were just tough to watch.

Elias Petterson’s shot goes off the boards and bounces behind Hart’s skate and in the net. J.T. Miller finds Alex Chiasson at the front of the net and his initial shot was stopped, but the puck once again bounces and rolls in behind Hart’s skate. The fourth goal was just plain awful. A shot from the far angle that trips up Hart and Miller finds the rebound to tuck it in.

After that Carter Hart bounced back and made some timely stops and kept the Flyers in the game when momentum was completely on the Canucks’ side. A lot of the shots in the third period were from bad angles, trying to capitalize on Hart’s biggest weakness. It’s definitely something he has to work on because it has been a crutch in the last few seasons.

It’s tough to tell which Carter Hart we’ll get for tonight’s game against the Seattle Kraken, but for now we can call it an outlier because of how rare some of those goals were.

Despite being a talking point all summer and even in the pre-season, the Flyers penalty kill hasn’t gotten any better. There was some leeway during the pre-season because the full lineup was rarely together and there were a lot of personnel changes, however Friday night all those excuses were washed away.

The Flyers didn’t take any penalties in the first and third periods, but in the 6 minute lapse from the 3:13 mark of the second period to the 9:02 mark, the Flyers took 3 penalties and their penalty killing units looked lifeless. Taking nothing away from the Canucks power play specialists, the Flyers allowed them to do as they pleased.

Mike Yeo’s scheme works best when the defenders are being aggressive towards the puck carrier. The Flyers very rarely did that, if at all, and that is why the Canucks almost took the game away in the second period, scoring twice on 3 powerplays.

This is coming off the heels of a 60% penalty kill success rate during the pre-season and a 30th placed penalty kill from last year (73.05%). Kevin Hayes and Rasmus Ristolainen being out of the lineup hurts the penalty kill, but if the Flyers continue to lay back and let the puck carriers handle the puck with ease and no pressure, it’s going to be another long season and near bottom finish for Mike Yeo’s units.

A very positive takeaway from Friday night’s game was the impact of the newcomers. Ryan Ellis, Keith Yandle, Derick Brassard, and Cam Atkinson made their Flyers debuts and they all had a hand on the comeback.

Ryan Ellis has been fantastic from the onset of training camp, through the pre-season, and into the first game of the season. He was the biggest acquisition the Flyers pulled off during the off-season and it was all to give Ivan Provorov a proper top pair partner. He played a shade above 28 minutes, contributed with 2 assists, 3 shots on goal, and 3 blocked shots. He was extremely noticeable, made all the right plays, and if he can continue eating minutes it’s going to be a great season.

Keith Yandle’s offensive prowess has always been visible and the Flyers desperately needed that from their backend. Shayne Gostisbehere had his moments but eventually tailed off and now Yandle has taken over with ease. His passing IQ, getting the shots on the net, finding the right players to pass to, and being able to keep the puck in the zone is going to go a long way for the Flyers offense and power play. He finished the game with 2 assists as well.

Cam Atkinson and Derick Brassard are two thirds of the newly formed FAB line along with Joel Farabee, and they were extremely noticeable as well. The top line of Claude Giroux, Sean Couturier, and Travis Konecny are going to get the brunt of the shutdown defensemen, which is going to allow the second line to shine.

Farabee scored a goal shortly after the power play ended with Atkinson parked at the front of the net. Atkinson then scored a goal himself in the second period by getting to the crease and redirecting a shot past Demko off a nice pass from Farabee. Brassard finished the game with 2 shots, 3 hits, and a plus 1 rating, while Atkinson had a goal, was a plus 2, had 4 shots, and 3 hits.

After all the news and excitement over the newcomers, the veterans of the Flyers deserve some praise as well. Claude Giroux, Sean Couturier, Ivan Provorov, and Travis Konecny shined, in the third period especially.

Down 2 goals with less than 4 minutes to go, Konecny was able to draw a penalty on Oliver Ekman-Larsson and then score right away on the ensuing face-off. Claude Giroux followed that up with a beauty of his own, redirecting Couturier to make a bank pass off the boards to find him open with half the net empty.

The top line was noticeable and buzzing for most of the game and they Flyers are going to need that and then some with the current state of their team injury-wise. A lot of talk has been made about Giroux and whether or not he can still produce at an elite level and carry this team to the promised land. If he wasn’t the best forward on Friday, he was definitely the second best. His production, alongside Couturier and Konecny, will propel the Flyers as long as they are consistent.

Ivan Provorov was a beast among men, playing 29 minutes of ice time, getting 4 blocks, was a plus 2, recorded an assist, and had 1 hit. He formed a formidable duo with Ellis very quickly and the Flyers finally have a top pair worthy of competition and accolades. Provorov might not be the top guy just yet, but let’s not forget that he’s still very young. Ellis has already had such a positive impact on his game and we’re only 6 pre-season games and 1 regular season game into the Flyers’ season and their future.