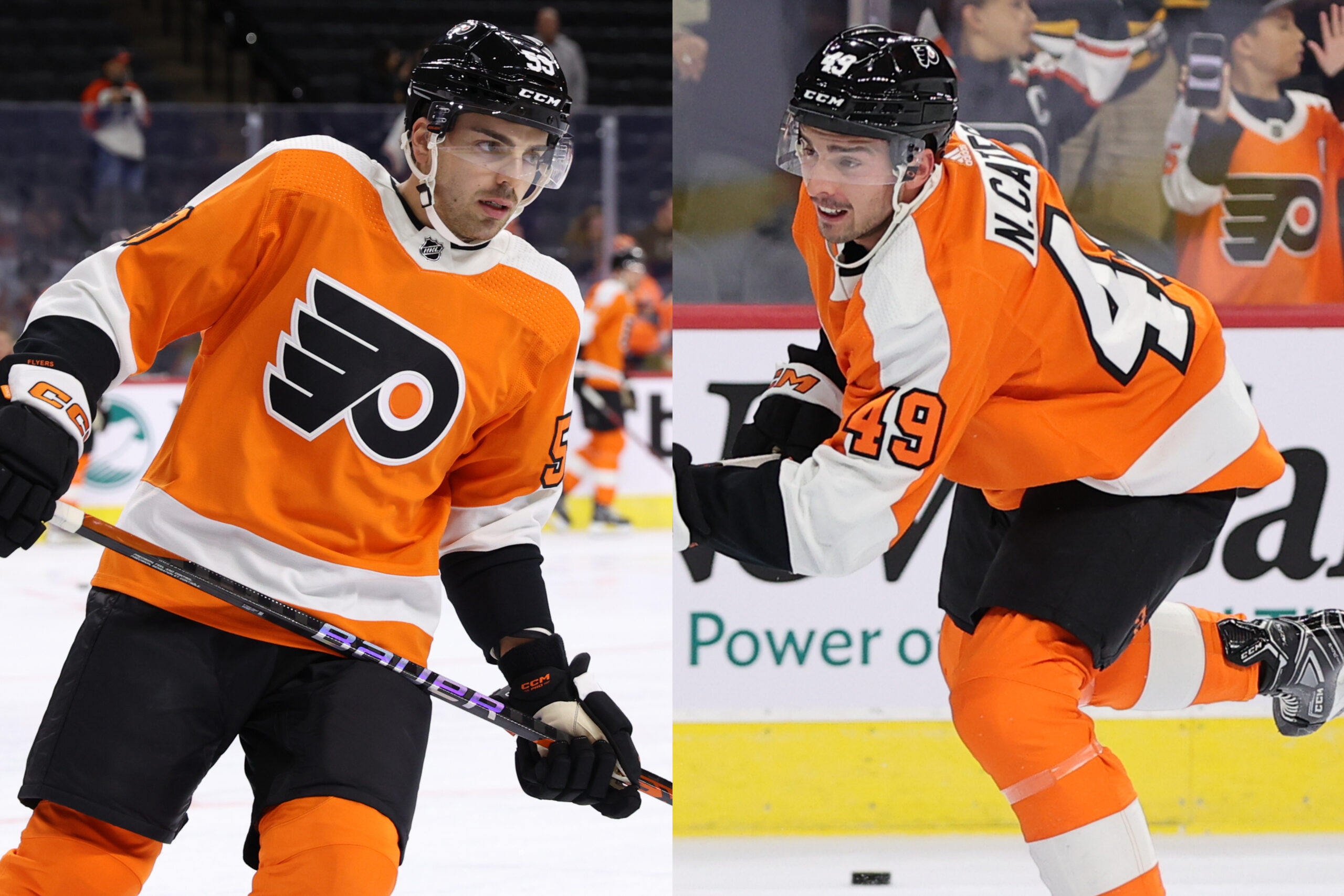 There have been many notable hockey family dynasties that have left their mark on the NHL; the Staals, Subbans, Hughes, Sedins, and even the Great One himself Wayne Gretzky and his brother, Brent.

The Flyers now seem to have their own dynamic, DNA-sharing duo fighting to make a mark on the Flyers’ roster in Noah and Jackson Cates. There are no guarantees to staying on the team, but John Tortorella respects hard work and tenacity and these two show it on the ice.

Both brothers got some NHL minutes last season amidst the Flyers’ freefall. Noah proved more succesful in his stint, racking up 9 points (5G, 4A) in 16 games, while Jackson only managed 1 goal in 11 games. Now faced with an opportunity to stick with the big club full time, the Cates brothers need to leave a memorable impact on their teammates and coaches if they want to stay in Philadelphia.

This is not the first set of brothers to don the Orange and Black sweaters together! In the mid-1970s, defensemen Joe and Jimmy Watson helped lead the Flyers to back-to-back Stanley Cup championships and are both members of the Philadelphia Flyers Hall of Fame.

Back in the mid 80s, the Flyers had their own set of identical twins, Ron and Rich Sutter. They were part of the Flyers’ 1985 squad that made a run to the Stanley Cup Final, ultimately falling to the Edmonton Oilers in 5 games. Imagine getting steamrolled, thinking you’re seeing double, but it’s actually just identical twin Sutter brothers taking off on a 2-on-1 the other way.

The Flyers also had Luke and Brayden Schenn together on the roster from 2012 to 2016, before Luke was traded to the Los Angeles Kings.

Jackson Cates is the older of the two Cates brothers, born September 26, 1997, while Noah was born Feburary 5, 1999. The Cates brothers were born in Stillwater, Minnesota to parents Jeff and Jennifer. Their dad Jeff and uncle Jay both played college hockey. Jeff captained the University of Wisconsin-River Falls team to a D3 National Championship, while Jay was also the captain of his respective team at the University of Minnesota. Their mother, Jennifer, earned her bachelor’s degree in business from the University of Minnesota and has her CPA, both of which she uses to manage the Cates family business. Jennifer, Jeff and Jay collaborated to create Cates Fine Homes, a company that provides assistance in the home-building process and you can read more on that here.

The Cates brothers have, unsurprisingly, had an intertwined career thus far. Jackson and Noah played together at Stillwater Area High School where they dominated individually and as a duo. Noah served as one of the team’s captains during a run in the Minnesota State High School AA Tournament. Jackson finished his senior year with an incredible 120 points (57G, 63A), the highest in school history, and earned himself the Herb Brooks Award.

Both Cates boys found themselves playing in the USHL, but this time for opposing teams. Jackson played for the Waterloo Black Hawks and Noah played with the Omaha Lancers. Jackson posted 84 points in 113 games with the Black Hawks and Noah tallied 62 points in 71 games. Both Cates brothers put up impressive point totals during their time in the USHL, which ultimately led Noah to be drafted by the Flyers 137th overall in 2017. After the USHL, it was on to the University of Minnesota-Duluth for these fellas.

While at the University of Minnesota-Duluth, the Cates brothers consistently produced over the course of their college careers. In 139 games Noah tallied 39 goals and 60 assists and Jackson potted 27 goals and 37 assists in his 96 games. The Cates boys joined an already impressive UMD club and were key players in the latter half of back-to-back national championships for UMD.

The paths to the Flyers were the same yet different for the Cates boys. Noah was fortunate enough to have his name called at the 2017 NHL Draft. Noah was drafted 137th overall in the 5th round by the Flyers. Jackson, however, would have to wait a few years before he got the NHL call. Jackson went undrafted and was signed by the Flyers to an entry-level contract as a collegiate free agent in April 2021 and would make his NHL debut just a few days later against the New York Rangers. Despite being drafted by the Flyers in 2017, Noah didn’t make his NHL debut until March 2022, roughly a year after Jackson.

After a grueling, hard-nosed, skate-til-you-puke training camp with John Tortorella and the Flyers brass, the Cates brothers made their impacts on the new bench boss. Noah found himself on the opening night roster in Philadelphia against the New Jersey Devils, while Jackson was sent to marinate in the AHL. However, Jackson didn’t have to wait very long before he’d return to the Flyers lineup, only missing the home opener.

Noah has found himself in all situations under Torts and has been a player that the new coach can’t seem to get enough of. See what Torts had to say about the younger Cates’ efforts in game three against the Tampa Bay Lightning:

“The way I explain my confidence in him, I’m always looking for him on the bench. He killed a big penalty in the third period where I was only using four guys. It’s not only good for him short-term here, but for the big picture… He scores a goal, a big goal, we want him to score also and not just rely on the defensive part of his game. I think it’s really exciting now, but I’m also looking at the future and what he becomes as we get growing as a team.”

NOAH CATES DOES IT ALL BY HIMSELF!!! #FLYERS GO UP 3-2!!! pic.twitter.com/LcKmkwPeUI

Noah and Jackson Cates have been impactful players at every step of the way throughout their young careers. In the current Flyers climate, both players have massive opportunities in front of them to make the Cates name a household one in Philly. As the season progresses and the games get tougher, look for these two to be counted on in big minutes. Seeing the Sedins, Staals, Hughes and all the other brother combos in the NHL, it’s nice to finally be on the other side of the deadly brother duo.

Hopefully these Fly Guys can become hugely impactful players in the near future and help claw the Flyers back into contention.