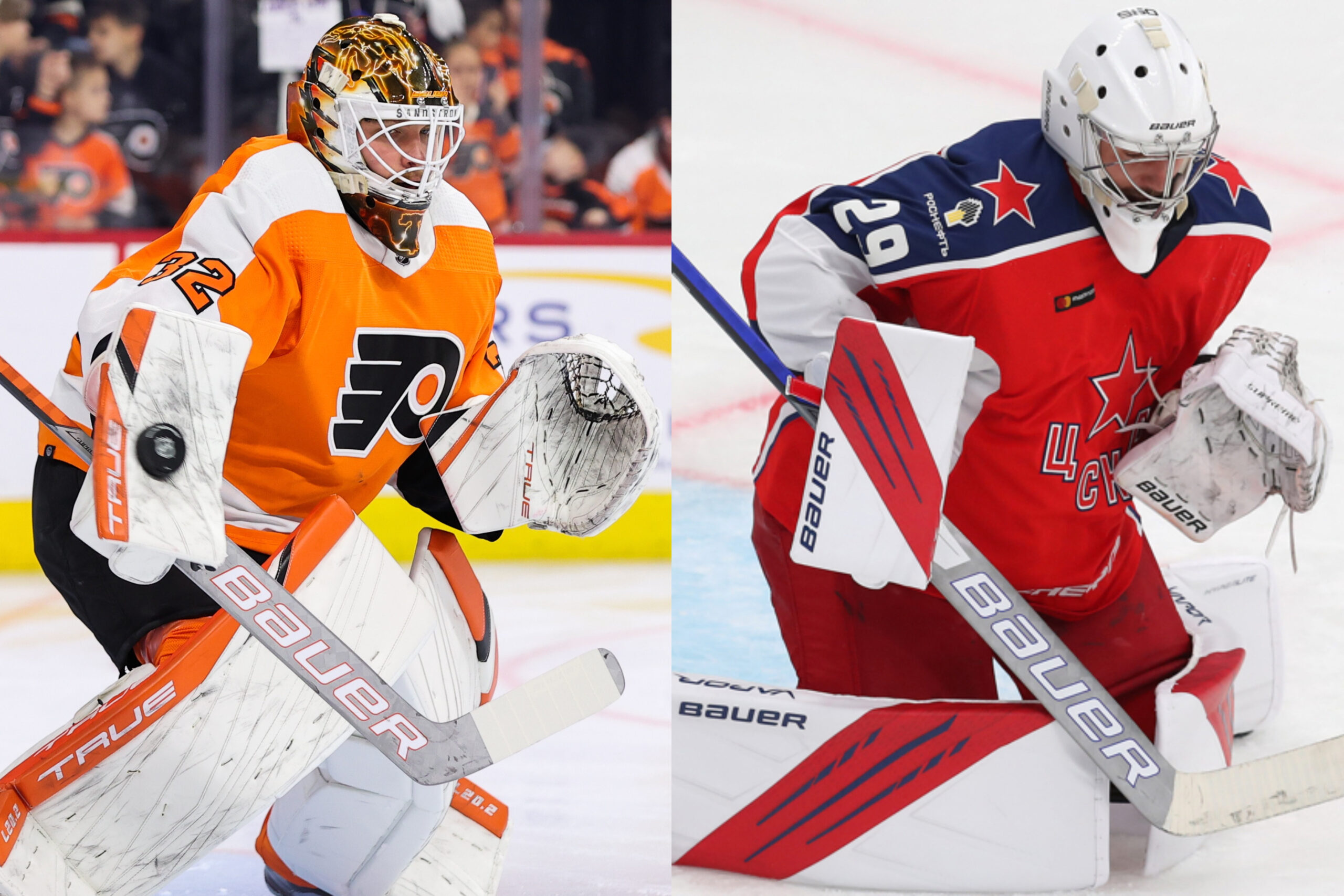 Should Felix Sandström or Ivan Fedotov be the Flyers’ backup goaltender next season?

For once in at least a little while, goaltending isn’t the main concern for the Philadelphia Flyers. At least right now, it isn’t.

The Flyers iced three goaltenders this past season; Carter Hart, Martin Jones, and Felix Sandström. Hart and Sandström should be in the Flyers’ plans moving forward, while Jones will probably not return next season.

Hart, who didn’t take the ice again this year after suffering a lower-body injury, rebounded relatively well from last season’s disastrous performance. Despite a poor 13-24-7 record that can be largely attributed to the Flyers‘ awful play in front of him, Hart posted a .905 save percentage and a 3.16 goals against average along with one shutout that took place on November 2nd against the Arizona Coyotes. Those peripheral numbers may not look all that pretty, but they’re much better than the measly .877 SV% and 3.67 GAA he recorded last season.

Martin Jones’ inaugural foray into the Philadelphia net didn’t fare as well as everyone had hoped, but towards the end of the season he seemed to be one of only a few Flyers to show some legitimate effort on the ice in games. His overall numbers on the season were mediocre, which again is partially because Philadelphia iced a less than ideal roster for the majority of the season, but Jones also struggled a bit throughout the year at times as well. The veteran racked up a 12-17-3 record, a .900 SV%, and 3.43 GAA in 34 appearances this season.

Those numbers are about what he recorded in San Jose last season, and Jones may very well be just another backup goalie at this stage in his career. But the Flyers have plenty of young goalies chomping at the bit to try and earn a spot in Philadelphia, and the young Swede in Felix Sandström, who played his first five NHL games this past season, should be at the top of that list of prospects; and yes, while that list includes recent KHL champion and Russian Olympian Ivan Fedotov, who will likely make the jump to North America this coming season, Sandström is more than worthy of getting a legitimate chance to play in the NHL.

Sandström, at first glance, isn’t exactly a can’t-miss youngster that will dominate the NHL. But there’s more than meets the eye with the 25 year-old Gävle, Sweden native. He’s just 0-4-1 in five NHL appearances, all starts. His NHL debut saw him stop 43 of 46 shots against the San Jose Sharks back on December 30th, the most saves made by a Flyer ever in a team debut or NHL debut. He posted a .910 SV% and 3.15 GAA in his limited action in the big leagues, and while he did not win an NHL game, he was routinely the best player for the Flyers in just about every game he suited up for.

In fact, Sandström faced more shots in his first five Flyers starts than any other Philadelphia goaltender in the last 14 years at 177, and he stopped 161 of them, also tops in that span. His 161 saves in his first five Flyers starts are especially remarkable as it’s many as Bernie Parent had in his first five starts with the team in 1967, and it’s also more than other various Flyers goalies through franchise history such as Doug Favell (146), Wayne Stephenson (121), Pete Peeters (104), Bob Froese (111), Pelle Lindbergh (156), Ron Hextall (150), Dominic Roussel (113), John Vanbiesbrouck (91), Brian Boucher (90), Roman Čechmánek (118), Robert Esche (118), and Antero Niittymäki (115). The last goaltender to make more saves in their first five Philadelphia starts than Sandström was Martin Biron, who stopped 167 shots in his first quintet of games in 2007.

Sandström’s AHL numbers with the Lehigh Valley Phantoms this season did leave a bit more to be desired even though his NHL play was solid, but if you thought Philadelphia was dealing with their own inconsistency and injury issues, their minor league affiliate up the turnpike in Allentown suffered just as much, if not worse than the Flyers. Sandström appeared in 44 games for the Phantoms this season, recording just a 16-18-5 record while posting a .902 SV% and 2.89 GAA with two shutouts. His 16 wins led the team while the other five goalies that suited up for the Phantoms combined for just 13 victories. His save percentage and GAA were only slightly edged by minor league veteran Pat Nagle, who played in just 22 games, partly because he was participating in the 2022 Winter Olympics with Team USA, and recorded a .904 SV% and 2.74 GAA with two shutouts of his own.

Now, general manager Chuck Fletcher alluded on Tuesday at his press conference to the fact that Ivan Fedotov is expected to sign an entry-level contract soon and they’re actively working to bring him over. The 2015 seventh-round pick by Philadelphia posted a 14-10-2 regular season record along with a .919 save percentage and 2.00 goals against average, along with two shutouts this past season for CSKA Moscow of the KHL. While his record seems average, he was dynamite in the Gagarin Cup playoffs for his club, racking up a 16-6 record with a remarkable .937 SV% and 1.85 GAA to help lead the Sergei Fedorov-coached team to their second Gagarin Cup championship in franchise history, including a 42-save perfomance in a 4-1 victory in Game 7 over Metallurg Magnitogorsk on April 30th. He also represented his country at the 2022 Winter Olympics in Beijing, as he started six games in the tournament and led the Russian Olympic Committee to the gold medal game against the eventual champions in Team Finland.

In saying all of that, Fedotov is clearly ready to make the jump to North America; he has 56 career KHL wins under his belt and never posted a save percentage worse than .919 in any full season in that league. However, should Sandström have a leg up on him going to training camp next year due to his experience, albeit limited, in the NHL?

The Russian game is a bit different than here in North America, and while strong performances in a top league like the KHL coupled with an Olympic silver medal are good enough to hang your hat on, there’s always the risk of an adjustment period when bringing a player into a different setting. The last time the Flyers brought a KHL goalie into the fold that was this highly regarded, Sergei Bobrovsky was traded just after two seasons and struggled at times with Philadelphia. Of course, the Flyers’ decision was incredibly short-sighted and Bobrovsky has remained one of the premier goalies in the league over the last decade during stops in Columbus and Florida.

Now, I’m not advocating to trade Fedotov like Bobrovsky, that would be simply idiotic. However, could he be better suited by beginning in the AHL with the Phantoms first? Sandström was pretty good early in his professional career in the SHL in his native Sweden, he’s played relatively well in his time with the Phantoms given the teams he’s played on, and he performed at a very high level in the NHL on possibly the worst Flyers team to ever exist, so what exactly does he have to gain by going back the AHL? The same question could be posed for Fedotov given his prior success as well, but at least Sandström has seen NHL action and we have seen glimpses of what he can provide behind Carter Hart. Heck, the only reason he was called up to Philadelphia was because Hart was injured and he was fantastic in the Flyers’ net in a pinch on multiple occasions this season.

In short, it’s anyone’s battle. Both goaltenders have performed well pretty much everywhere they’ve played, and both can easily provide the Flyers with one of the best goaltending tandems we’ve seen on the team in quite sometime no matter who’s paired up with Carter Hart.

At the end of the day, once Sandström is re-signed, everything will come down to how each player performs in training camp and in their preseason appearances ahead of the 2022-23 season in the fall, but given what we’ve seen so far, Felix Sandström should have the leg up on Ivan Fedotov going into everything, and only time will tell who skates out of the tunnel at Wells Fargo Center on opening night next season.

Now Being Tabbed an “Aggressive Rebuild”, the Flyers Look to the Future While Trying to Remain Competitive
Flyers sign goalie prospect Ivan Fedotov to one-year contract