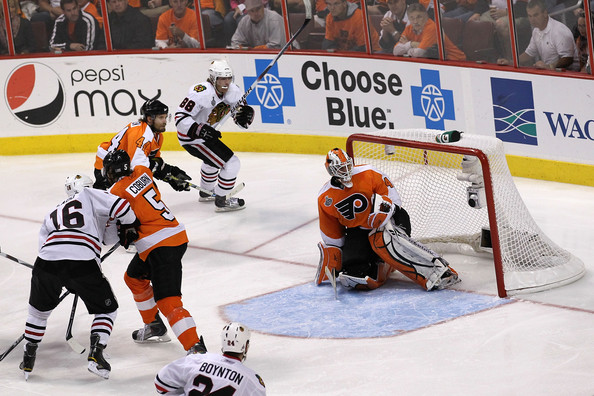 On This Day in History…What Could’ve Been

A little over 2 weeks ago, I discussed the 12th anniversary of the Philadelphia Flyers defeating the Montreal Canadiens in 5 games in the Eastern Conference Finals to clinch their berth into the Stanley Cup Final against the Chicago Blackhawks. The Cinderella story that was the Flyers’ postseason run started with a winner-take-all shootout win in the final game of the season against the New York Rangers, then they easily handled the 2nd-seeded New Jersey Devils in 5 games, stumbled out of the blocks against the Boston Bruins before completing a historic comeback down 0-3, and then propelled by “The Shift” by Mike Richards and the stalwart goaltending of Michael Leighton, the Flyers had very little issues handling the 8th-seeded Canadiens in the final four. It set the stage for two teams who were carrying the longest Cup drought and the third-longest Cup drought; either way for a neutral fan, someone was going to end their lengthy drought.

Game 1 was a high-scoring affair that involved 11 goals and 6 different lead changes, but ultimately it was the Chicago Blackhawks who were able to take the final lead and secure Game 1 by a score of 6-5. Michael Leighton was pulled after allowing the 5th goal and Brian Boucher made his first appearance in the playoffs since leaving Game 5 of the Eastern Conference Semifinals against the Boston Bruins with an injury. Leighton took over after that and was sublime en route to the Final.

Game 2 was a completely different affair as the Blackhawks took the stranglehold of the series after a 2-1 win. Former Flyer Ben Eager scored the game-winning goal, the Blackhawks scored 2 goals in a span of 28 seconds with a shade under 3 minutes to go in the second period and even though Simon Gagne scored midway through the third for the Flyers, they weren’t able to tie things up after that.

Heading to Philadelphia down 0-2 in the series was a tough look, but this team was resilient and after witnessing their comeback against the Bruins in the second round, anything was possible. Game 3 had the Flyers up by one heading into the second period, thanks in large part to Daniel Briere and his 11th goal of the playoffs. The second period brought about 3 goals, 2 of which belonged to Chicago as the game was tied with 20 minutes remaining in regulation. Patrick Kane took the lead early in the third period only for Ville Leino to tie things back up 20 seconds later. The game was tied after regulation and heading towards an overtime session, which laid the path for one of Claude Giroux’s biggest goals of his career as he was able to deflect a Matt Carle pass past Antti Niemi and give the Flyers life in the series.

Game 4 went Philadelphia’s way as well as they set the stage early with a 3-1 lead after the first period and then adding another goal midway through the third. Down by 3 with 13 minutes left, the Blackhawks clawed their way back with two goals of their own, but Jeff Carter was able to seal the deal with an empty net goal to even the series as they headed back to Chicago.

Similar to Game 1, it was a see-saw affair but in favour of Chicago in Game 5 as they scored 7 of the 11 goals and never held a lead of less than two goals from the second period onwards. The Blackhawks took a 3-0 lead in the first period with a few late goals courtesy of Dave Bolland and Kris Versteeg. The Flyers’ Scott Hartnell scored 32 seconds into the second period but that was quickly followed up by a Patrick Kane marker. Kimmo TImonen scored less than a minute later to cut the deficit back to 2, but once again the Blackhawks added to their lead with a late third period marker. Chicago and Philadelphia each scored 2 more times in the third period but ultimately the game ended 7-4 in favour of Chicago as they were one win away from ending their drought from 1961.

On this day in history, June 9th, 2010, the Philadelphia Flyers played host to Game 6 of the Stanley Cup Final down 3-2 in the series and looking for home-ice advantage to help them tie the series and send it back to Chicago for a 7th game. Dustin Byfuglien opened the scoring on the power play almost 17 minutes into the game before Scott Hartnell and the Flyers replied with a power play goal of their own with only 27 seconds left in the first frame. Daniel Briere gave the Flyers their first lead of the game midway through the second period, but the Blackhawks replied with 2 goals of their own as they took a 3-2 lead heading into the third and final frame in regulation. Patrick Sharp had scored 2 minutes after Briere’s goal to tie the game and then with a shade over 2 minutes left, Andrew Ladd provided the go-ahead goal.

The third period was tightly contested and heading towards the waning moments, when Scott Hartnell tied the game up with his second goal of the game with only 3:59 remaining. Jeff Carter had a glorious opportunity to score the go-ahead goal after being set up by Mike Richards and Simon Gagne but his turn-around shot went straight towards the shoulder pads of Niemi, keep the score tied with 1:30 remaining.

We headed towards another overtime session, hoping for a repeat of Game 3, however it was none other than Patrick Kane – the consensus number one pick in the year the Flyers finished dead last in the standings – who scored the game-winning goal, crushed the might and souls of Philadelphia, and brought back relevance to the Blackhawks organization that had been struggling for decades. Darrell Powe’s clearance attempt was held in the zone by Brian Campbell who then passed the puck to Patrick Kane along the boards. Kane made a shimmy move on Kimmo Timonen, held onto the puck and advanced forward, and then from a near-improbable angle just shot the puck and found daylight underneath the pad of Michael Leighton. Kane knew it went in as he celebrated promptly, no one else had seen the puck go into the net, but after a review the referees had deemed the puck had crossed the line and therefore ending the season for the Flyers on a terrible note.

It was the first of 3 Stanley Cups that the Blackhawks had won from 2010-2015, while the Flyers slumped into an irrelevant decade shortly after. Mike Richards and Jeff Carter only played one more season for the Orange and Black, Chris Pronger suffered a career-ending injury in the fall of 2011, and Michael Leighton’s journeyman career hit its apex during that playoff run. The Flyers were so close – only two games away from winning it all and ending their drought that spanned from 1975 to now – however, that was as close as they’ve come in the last 12 years.