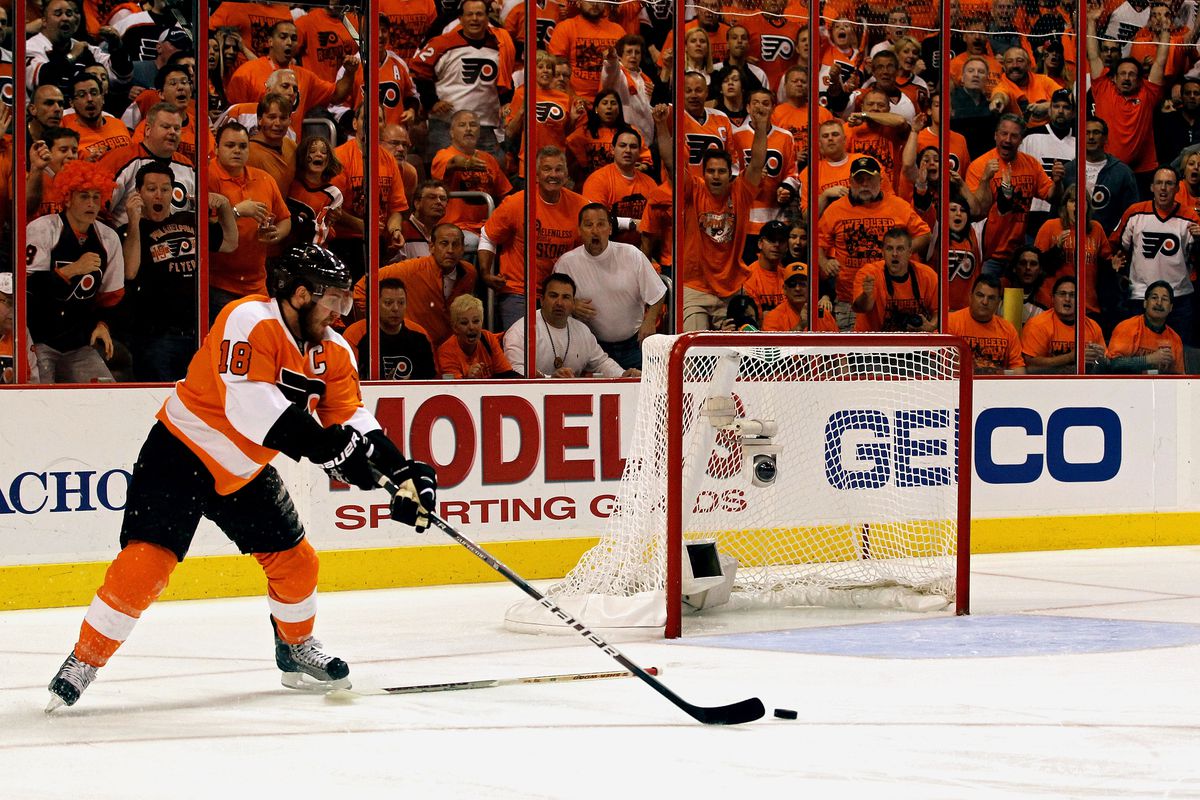 On This Day in History…the Flyers Were Fun

On this day 12 years ago, the Philadelphia Flyers defeated the Montreal Canadiens 4-2 in Game 5 of the 2010 Eastern Conference Finals to advance to their 8th Stanley Cup Final in franchise history.

The Flyers’ Cinderella playoff run had previously continued after defeating the heavily favoured New Jersey Devils in the first round, and then staging a miraculous comeback from down 0-3 to the Boston Bruins in the Eastern Conference Semifinals. With their win, fuelled by “The Shift” from captain Mike Richards, the Flyers were set to face off against the Chicago Blackhawks in a Stanley Cup Final that featured two teams with lengthy championship droughts.

What a time to be alive if you were a Flyers fan with everything surrounding their improbable run as they looked for their first championship since 1975. The Flyers went into the final game of the season against the New York Rangers, in a winner-take-all showdown. The winner would advance to the playoffs and claim the final spot and face off against the 2nd-seeded New Jersey Devils. The game went to a shootout with Daniel Briere and sophomore Claude Giroux netting shootout goals against one of the best in the business in Henrik Lundqvist and the New York Rangers.

The 7th-seeded Flyers dispatched the 2nd-seeded Devils with relative ease in five games. Brian Boucher was the hero of Game 1, stopping 23 shots in a 2-1 win. The Devils came back in Game 2 to tie things up before the Flyers won the next 3 games. Game 3 was tight and could’ve really swung the series the other way as it went to overtime with the unlikely hero being Daniel Carcillo, while Games 4 and 5 were dominating wins for the Orange and Black.

The Flyers were down 0-3 to the Boston Bruins in the Semifinals and things didn’t look good in the slightest. At the time, only two teams in NHL history had completed the 0-3 comeback as the odds were severely stacked against the Flyers. Simon Gagne’s return seemed to propel the Orange and Black as he netted the overtime game winner in Game 4. In Game 5, the Flyers lost starting goaltender Brian Boucher to an injury mid-game. Michael Leighton came in, secured the shared shutout and the Flyers were back in the series heading back to Philadelphia. Daniel Briere was the hero again as he secured the game-winning goal on the power play, setting up a winner-take-all in Game 7.

The Flyers quickly found themselves down 3-0 in the first period, needed an electrifying speech from Peter Laviolette during their early timeout, and Michael Leighton got the vote of confidence from his head coach that he would remain in the net. The Flyers’ comeback started with a huge hit from Mike Richards that jarred the puck and there was James van Riemsdyk to finish it off with a fluttered shot. Scott Hartnell and Daniel Briere scored in quick succession in the second period to tie things up, and then Simon Gagne’s comeback tour came to a rousing completion after netting the go-ahead power play goal in the third period.

The Flyers completed the improbable comeback to set up another improbable date with the 8th-seeded Montreal Canadiens for a chance to play for the Stanley Cup. The 8th-seeded Canadiens dispatched the Washington Capitals in the first round and then Pittsburgh Penguins in the second round, largely in part because of Jaroslav Halak’s Cinderella run of his own. The Canadiens took both their opponents to 7 games and looked tired, weary, and honestly over-matched against the more skilled Flyers.

Things didn’t get any easier for the Canadiens as the Flyers shut them out in both Games 1 and 2 by scores of 6-0 and 3-0, respectively. The Canadiens took care of business in Game 3 in front of their raucous home crowd as the Flyers fell 5-1. The Canadian media had a field day ahead of Game 4, pushing for a Flyers meltdown and beatdown. All Michael Leighton did was shutout the Canadiens for the third time in the series as the Flyers now had a chance to win the Eastern Conference on home ice.

Down 1-0 in the first period and on the penalty kill, Mike Richards, Braydon Coburn, and Claude Giroux staged an immaculate shift while down a man to bring the Flyers back in the game and seal the deal with the momentum swing. Richards with another huge hit, this time at the blue-line, jarred the puck loose and he was off to the races with Giroux on an odd-man rush. Coburn joined as the trailer-man and his shot was stopped by Halak. The Canadiens took the loose puck and attempted to get an odd-man rush of their own but Coburn delivered a huge check of his own at the blue-line. Matt Carle won his battle, got the puck loose and sent it towards the board to Claude Giroux, who set-up Mike Richards with a perfect alley-oop. It started as a race between Mike Richards and Roman Hamrlik, but Halak decided to come out of his net to get to the puck first. Richards dove for the puck and then crashed into Halak, the puck came out and was rolling towards the blue paint for Richards to score one of the easiest but most electrifying goals of his career.

Kirill Ustimenko Assigned to Phantoms by Flyers, Royals Sign Hayden Hawkey
On This Day in History…What Could’ve Been